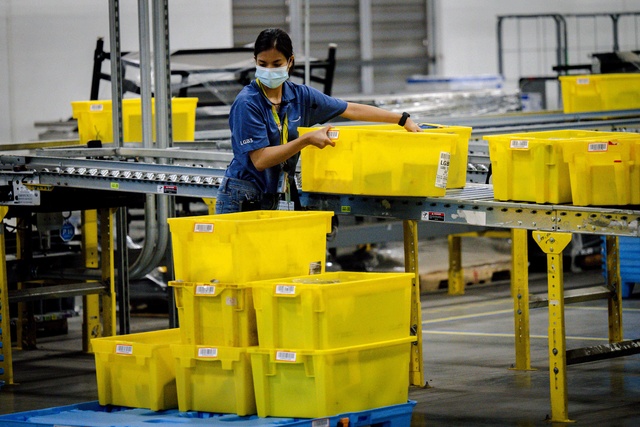 Anna Chitman stacked bins at an Amazon warehouse in Eastvale on Aug. 31.

“We cannot allow corporations to put profit over people."

Gov. Gavin Newsom on Wednesday signed a bill that curtails productivity quotas at Amazon and other warehouse employers, the first legislation of its kind in the U.S. The law forces companies to disclose production quotas and prohibits penalties for bathroom breaks. A study in June found that Amazon workers face a significantly higher rate of serious injury than other warehouse operators. Washington Post | Reuters

While labor leaders celebrated the warehouse bill, they were enraged by Newsom's veto of another measure that would have let farm workers vote by mail in union elections. Protesters marched toward the French Laundry. Sacramento Bee

In early July, Newsom stood at the edge of a shriveled lake and pleaded with Californians to cut their water use by 15%. At the time, all but 5% of the state was gripped by "severe drought" or worse. Still, Newsom stopped short of making the cuts mandatory. "We’re not trying to be oppressive,” he said. New data has now revealed how people responded: Water usage statewide was down 1.8% in July compared with the same period in 2020. In Los Angeles and San Diego, it increased. CalMatters | L.A. Times

Petaluma down 25%; Poway up 14%. See how much your water district's usage changed. 👉 Mercury News 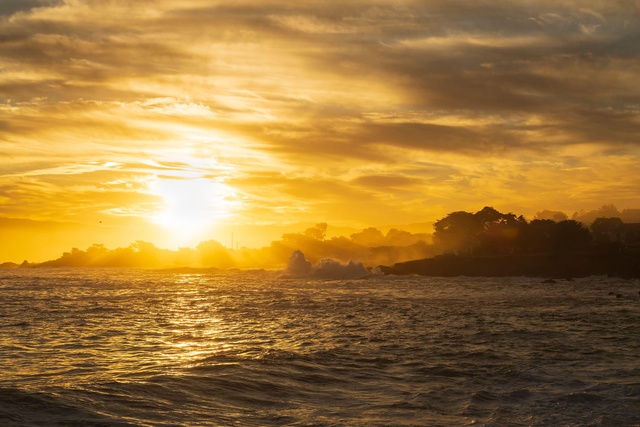 The sunrise from Lovers Point in Pacific Grove.

At the southern end of Monterey Bay, a peninsula curls out into the ocean in such a way that part of the shore faces east. That makes it among a few places along the California coast where you can watch the sun rise over the Pacific. Thrillist included the beach, Lovers Point, in an end-of-summer list of California's most beautiful places "you never knew existed." 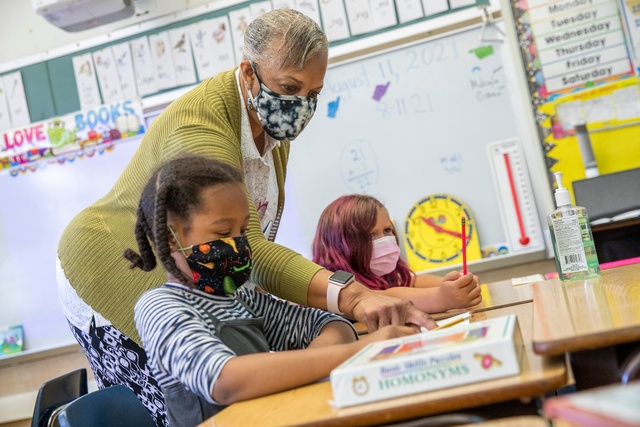 Joy Harrison instructed her second graders at Carl B. Munck Elementary School in Oakland on Aug. 11.

Oakland Unified School District will require students to be vaccinated against Covid-19, the school board decided late Wednesday, making it the first in Northern California to impose a student mandate. Just 34% of the district's Black students have been vaccinated, and 55% of Latino students. Mike Hutchinson was the only board director to oppose the mandate. “I’m concerned about passing a mandate that (says) half of Black and Brown students can’t come to school,” he said. East Bay Times | S.F. Chronicle

Marin County is now averaging about nine coronavirus cases a day per 100,000 residents. That's less than half of the figure in California, the state with the lowest case rate in the nation. The reason is no mystery: An incredible 97.6% of eligible residents are now at least partially vaccinated. The county's health officer, Matt Willis, credited the community's “strong belief in science.” S.F. Chronicle | KGO

San Francisco has long resisted tiny cabins for the homeless because of the shortage of open space in the city. Now it's changing course. A pilot project will install 70 small cabins on two parking lots, each with a bed, desk, heat, and a door that locks. Homeless advocates believe they offer the sort of dignity that can help people get back on their feet. S.F. Chronicle | Archinect 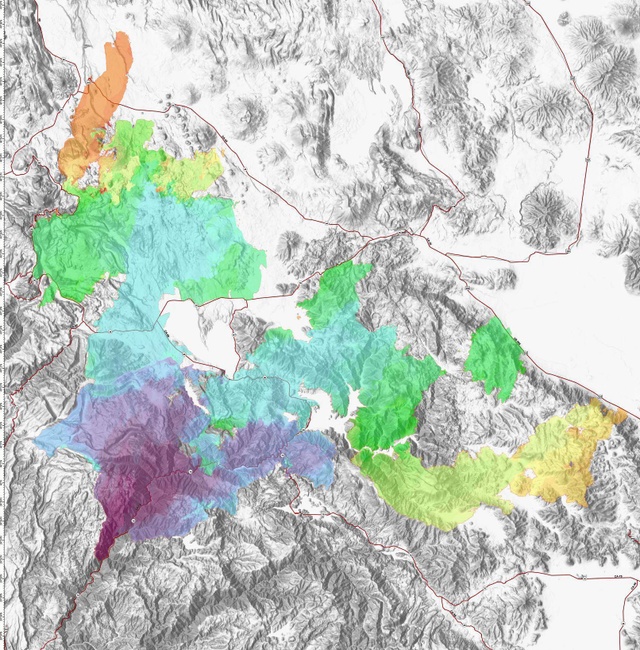 After 72 days, Northern California's Dixie fire is almost out. Fire officials said as of Wednesday the blaze was 94% contained, with a burn scar of more than 960,000 acres — an area larger than New York City, Chicago, Dallas, and Los Angeles combined — making it the largest single fire in recorded California history. The Guardian asked ecologists about prospects for surviving wildlife. The vast moonscape of charred terrain, they said, makes starvation likely. “What you are creating is analogous to an ocean that has a few little islands on it,” said Brad Shaffer, of UCLA. 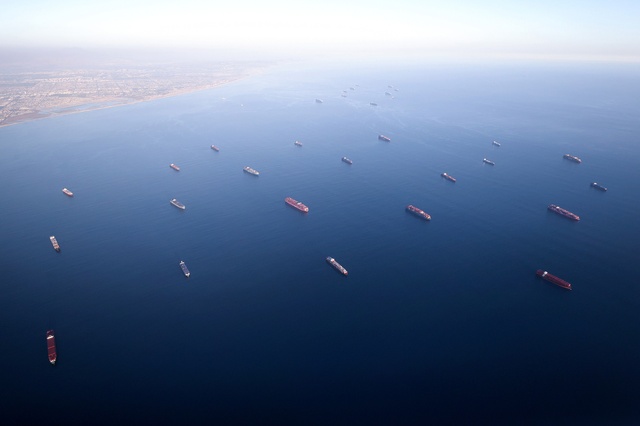 Ships waited outside the ports of Los Angeles and Long Beach on Monday.

A staggering 73 container ships waited to unload cargo at the ports of Los Angeles and Long Beach on Sunday, nearly double the number a month ago. Before the pandemic, it was unusual for more than one ship to wait for a berth at the ports, which handle 40% of all cargo containers entering the country. The bottleneck has been attributed to surging demand and worker shortages. Wall Street Journal | BBC

On April 23, a bounty hunter named Fabian Herrera broke into a Palm Springs home and fatally shot the man he had come to arrest. But there was no arrest warrant for the man he shot, a father of two named David Spann, and Herrera wasn't even allowed to be there: He was a twice-convicted felon with no bail license. Herrera now faces murder charges. On Wednesday, newly released video footage showed what led up to the shooting. As Herrera pointed a gun at Spann, who was wielding a knife, a police officer arrived and tased Spann. Then he gave an instruction to Herrera: "Shoot." Desert Sun

A San Luis Obispo Superior Court judge on Wednesday ordered Paul Flores to stand trial for murder in the 1996 disappearance of Kristin Smart. After hearing 22 days of testimony, Judge Craig van Rooyen said he held “strong suspicion” that Smart was murdered and buried under the deck of Flores' father, Ruben Flores, who is accused of helping conceal the body. “Whether there’s proof beyond a reasonable doubt," he said, "that’s for a jury to decide.” The Tribune | L.A. Times 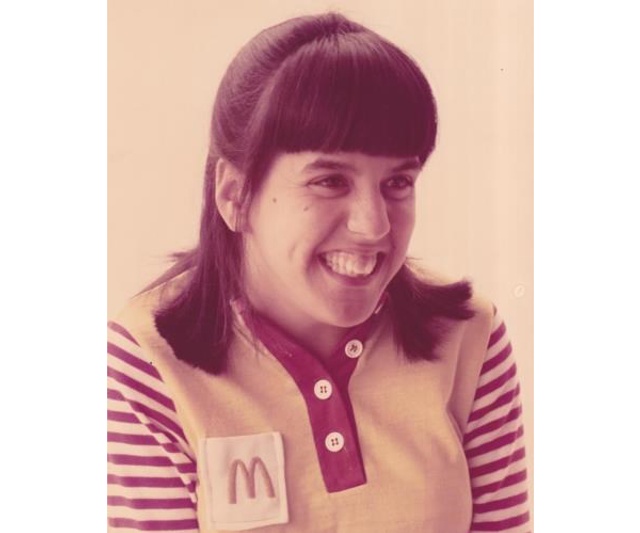 A poignant obituary written by an Oxnard man for his sister was just 189 words, but it became an internet phenomenon seen by millions. Karen Ann Sydow died on Sept. 5 at age 61. She had cerebral palsy and could speak just a few words, yet she “never had wants or misgivings,” wrote Erik Sydow. "Karen," he added, "I wish I could have made you laugh one more time. I needed you too." L.A. Times | Legacy 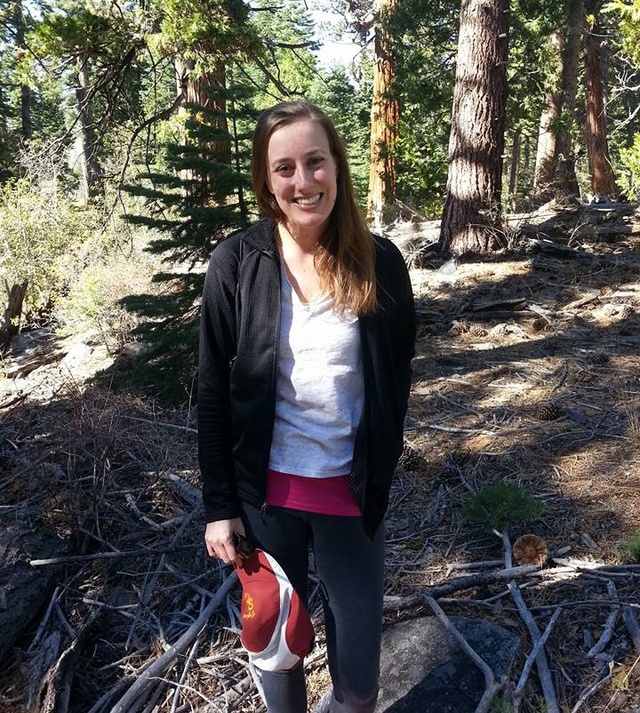 … Dallas Woodburn, an author, book coach, and the host of the “Overflowing Bookshelves” podcast.

A: Channel Islands National Park, off the coast of Ventura, where I was lucky to grow up. The five islands are all very different from each other, and each one has unique and beautiful ecological treasures. Hike to Inspiration Point on Anacapa Island, explore the sea caves on Santa Cruz Island, witness thousands of seals gathering at Point Bennett on San Miguel Island — and who knows what whales you might spot on the boat ride over! The Channel Islands have been called “the Galapagos of North America” for good reason.

I just finished reading Hilma Wolitzer’s short story collection, “Today a Woman Went Mad in the Supermarket,” and it is superb. She writes with such heart and wit — her stories are timeless. I was fortunate to take a workshop from Hilma in Key West a decade ago, and she is such a generous teacher in addition to being a wondrous writer.

Just down the street from my house in Fremont there is a fun little restaurant called Le Moose Crepe Café that combines two of my favorite foods: crepes and thai cuisine! It might sound like a strange fusion, but their food is so good. The peanut chicken crepe is my go-to, and they also have amazing dessert crepes.

I would invite Nicola Yoon, because her stunning novels illustrate all that is possible when writing for young people — her novel “Everything, Everything” was a big inspiration for my YA debut “The Best Week That Never Happened.”

Maya Angelou (who I am counting as a California figure for her time spent living in San Francisco) because her poetry has been a touchstone in my life, so filled with wisdom, humor, and hope.

And John Wooden, because his grace and insight extends far beyond the basketball court. I got to meet him as a 10-year-old, and I would love to have a long conversation with him now, as an adult.

To get the conversation started, I’d ask a question that I ask myself every day, and that I also like to ask my writing students: “What are you grateful for today?”

You work with young writers frequently. What have you learned as a writer — and as a human — from having access to their perspectives in these exchanges?

It is a gift to get to work with young writers and be welcomed into their creative processes. They give me hope for the future. Much of their fiction wrestles with themes of climate change, social justice, dystopian futures — written with such urgency and incisive emotion. Their vibrant energy, idealism, and big dreams remind me why I fell in love with writing in the first place. It is easy to lose touch with that in the daily muddle of adult responsibilities, chores, and worries.