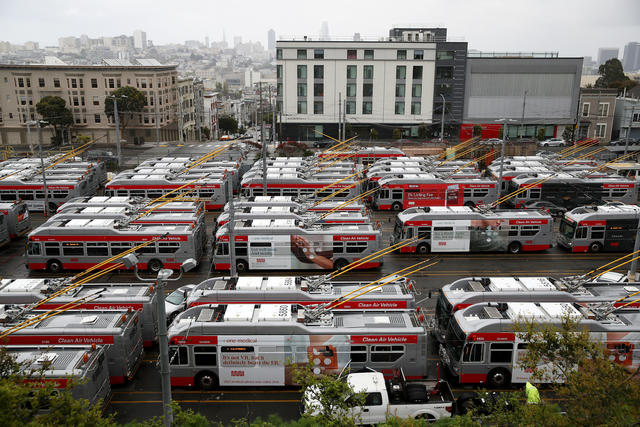 Parked Muni buses in San Francisco on Monday. Most bus lines have been halted.

The dreaded curve has started flattening out in the Bay Area. Three weeks after the region imposed the nation's first shelter-in-place order, case counts continue to rise but at a pace much slower than just a week ago. "It's unmistakable for some counties," a biostatistician said. "I definitely am guardedly optimistic." S.F. Chronicle

Still, a return to normalcy remained a "very, very long" way off, said Dr. Sara Cody, the public health officer who ordered the lockdown. Asked if everyone would be infected by the coronavirus, she said, "Yes, probably at some point." KGO 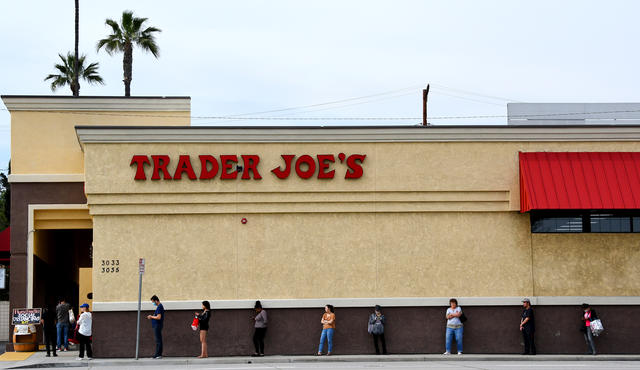 Customers waited outside a Trader Joe's in Pasadena on Tuesday.

Across Los Angeles County, meanwhile, cases continued to spike. As Mayor Eric Garcetti warned of a "make-or-break" week, residents were urged to avoid even visits to the grocery store. "If you have enough supplies in your home, this would be the week to skip shopping altogether," said Barbara Ferrer, the county's top public health official. L.A. Times | L.A. Daily News

All county residents can now apply to get a coronavirus test. LAist

The latest coronavirus totals include infections at a homeless shelter in San Francisco, a farm in Bakersfield, and a Costco in Redding. Tallies by the S.F. Chronicle and N.Y. Times: 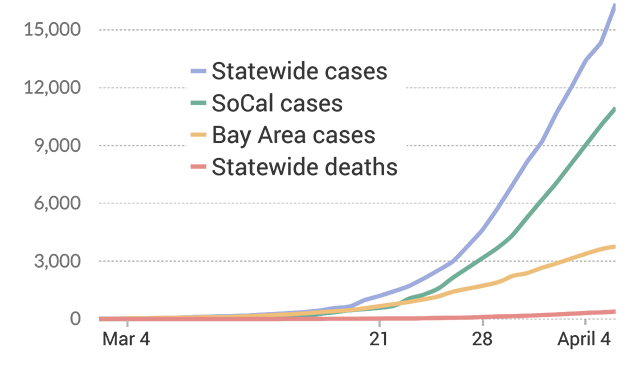 California has been in a desperate scramble to acquire enough ventilators to meet an expected surge of Covid-19 patients. Even so, Gov. Gavin Newsom announced Monday that California would loan 500 ventilators to states in direr straits. "We're meeting this moment with compassion," he said. "I know that if the tables were turned ... other states would come to our aid." A.P. | Politico

When will California's outbreak peak? A new analysis from the University of Washington says April 14, much sooner than past estimates. State officials have stuck with a projection of mid-May. A.P. | Sacramento Bee 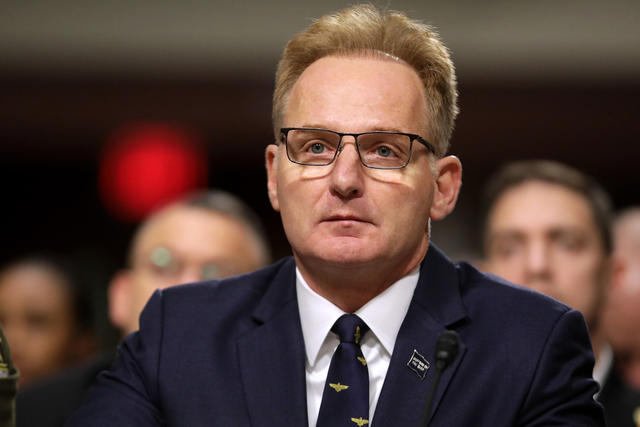 Acting Secretary of the Navy Thomas Modly testified on Capitol Hill on Dec. 3.

Thomas Modly, the acting secretary of the Navy, scolded sailors aboard the USS Theodore Roosevelt for cheering their former captain, Brett Crozier, who was removed after appealing for help for his stricken ship. Crozier, Modly said, either leaked his concerns to the media, or he was "too naïve or too stupid to be a commanding officer of a ship like this." As Modly's comments circulated Monday, some lawmakers began calling for his resignation. By evening, he apologized. S.F. Chronicle | N.Y. Times

In Borrego Springs, spring is when the wildflowers are glorious and the summer heat isn't yet relentless. So the timing of the pandemic couldn't have been worse for the tiny town that counts on "survival money" from tourists to Southern California's vast Anza-Borrego Desert State Park in March and April. S.D. Union-Tribune

Other examples of the state's economic turmoil: 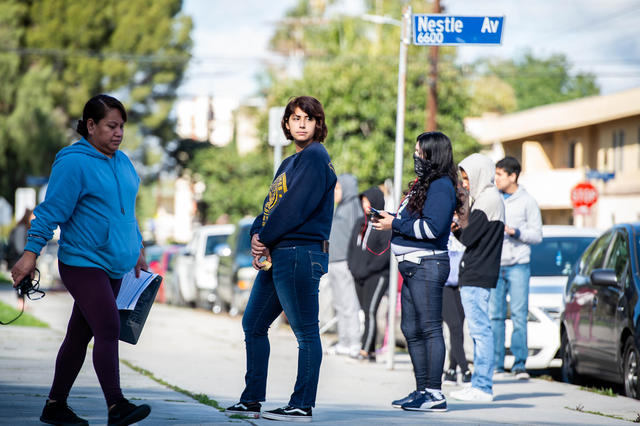 There is no precedent in many educators' memories for what's happening in education right now. While many students have moved seamlessly online, vast numbers of others have been completely logged off. "Most are under the impression that school is optional given the circumstances we are in," one student said. N.Y. Times

One student was sleeping. Another had no internet. At a third student's home, a parent who answered the phone only spoke Spanish, so Keara Williams conferenced in her grandma, who is fluent. Here's the quest of one high school teacher to track down her students. L.A. Times 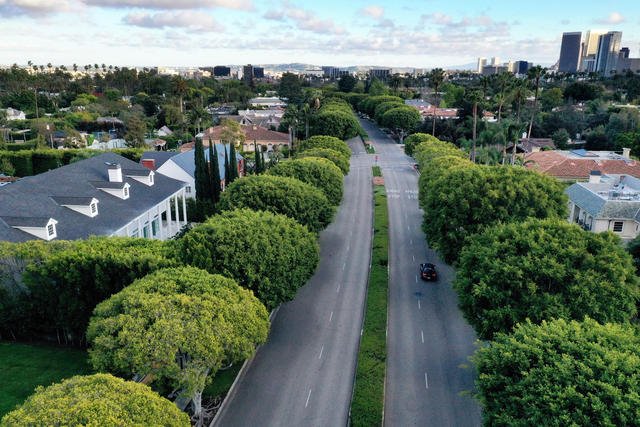 Rodeo Drive in Beverly Hills on March 23. Wide-open roads have been a temptation for speeders.

Bonus podcast: Host Jeff Schechtman talks with Dr. Jessica Mega, the co-founder of the life science company Verily, which has been working with the state on coronavirus testing. California Sun Podcast

PG&E's plan to emerge from bankruptcy has been abruptly cast into doubt. Lawyers who brokered a $13.5 billion deal for tens of thousands of wildfire victims now say they no longer support the deal, which proposed that a portion of the payouts be in the form of company shares. Given the stock market plunge, that arrangement suddenly looks less appealing. N.Y. Times | A.P.

Spring is a time of blooming flowers and abounding waterfalls in Yosemite. As it enters what would normally be high tourist season, the park posted a gorgeous video showing wildlife roaming the people-free valley. "While so much has changed for humans in recent weeks," the park wrote, "it's reassuring to see that nature carries on as it always has." YosemiteNPS/Twitter 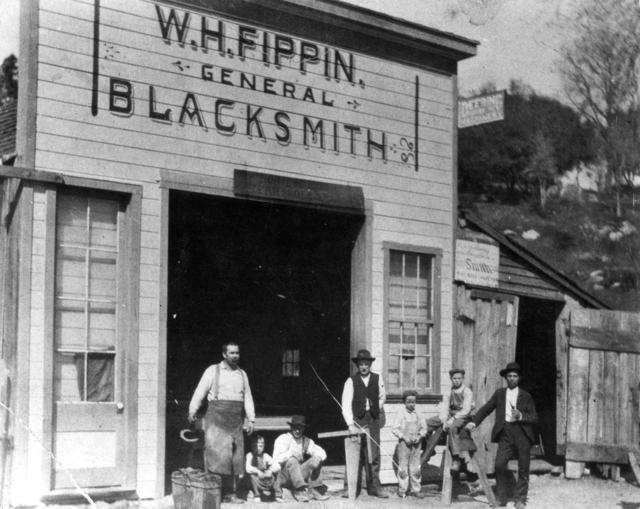 The hardy townsfolk of Rough and Ready, circa 1900.

Rebellions have been quashed through bloodshed, blockades, and subterfuge. Rough and Ready fretted over its liquor supply.

Nestled in the foothills northeast of Sacramento, The Great Republic of Rough and Ready was established on this day in 1850 by gold miners fed up with taxation and lawlessness.

The tiny new nation — whose peculiar name was borrowed from a nickname for Zachary Taylor, America's 12th president — adopted a constitution, chose a president, and formed a cabinet. Its sovereignty would be defended, a manifesto declared, "peacefully if we can, forcibly if we must."

Historical records, which are scant, suggest Rough and Readyans lost heart pretty much immediately. As July Fourth approached, residents realized they'd miss out on the festivities. More urgently, according to some accounts, saloons in neighboring towns refused to sell drinks to foreigners. So on Independence Day, an emergency meeting was held and Rough and Ready called the whole thing off. Just 12 weeks after its formation, a historian wrote in 1880, "The State of Rough and Ready vanished like the mist."

The scrappy spirit behind the secession, however, never died. More than a century and a half later, Rough and Ready's Secession Days festival, celebrated every June, is the town's biggest event of the year.

A photo caption in an earlier version of this newsletter misidentified a street in Beverly Hills. It's Rodeo Drive, not Wilshire Boulevard.