Good morning. It's Thursday, May 6. 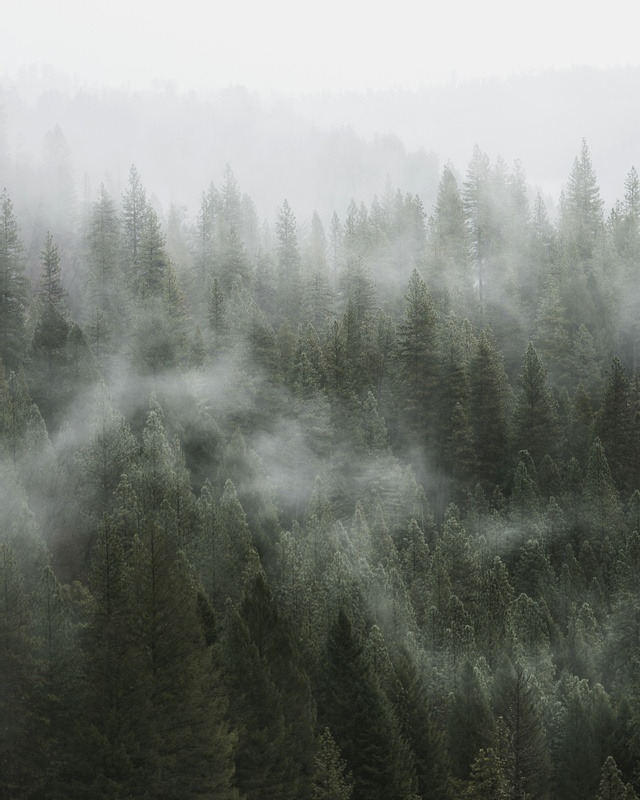 Not all forests are the same when it comes to capturing carbon.

As part of its efforts to combat climate change, California gives carbon credits to landowners who preserve forests; they in turn sell the credits to polluters for the right to emit more carbon. But different trees consume different amounts of carbon, a nuance that is obscured by the state's method of calculating carbon sequestration across giant, varied regions. The flaw, according to a new analysis, means the program is actually making the climate problem worse, adding tens of millions of tons of CO2 into the atmosphere. MIT Technology Review/ProPublica

Nearly half of all electric cars in the U.S. are purchased in California. But a surprising number of buyers experience a change of heart. A UC Davis study found that 1 in 5 electric car owners in California switch back to gas-powered cars. The reason, in large part: charging turned out to be too much of a hassle. Many lacked high-voltage power outlets at home. CNET | Business Insider 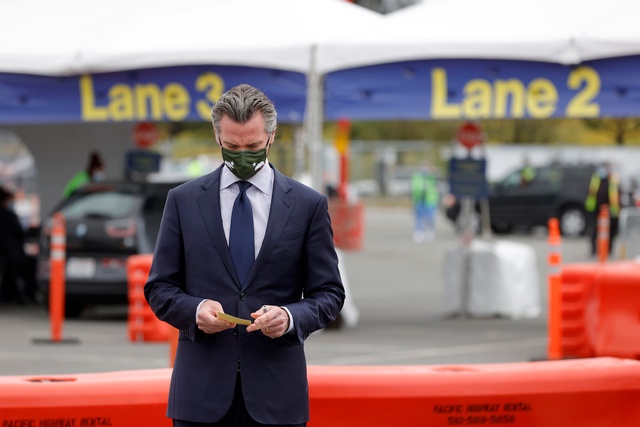 Gov. Gavin Newsom looked at his notes before a news conference in San Francisco on April 6.

All signs suggest Gov. Gavin Newsom will survive the recall election. But what if a credible Democrat enters the contest? Should public sentiment turn further against Newsom, an ambitious Democrat like Rep. Adam Schiff or Lt. Gov. Eleni Kounalakis could be tempted to make a late entry. Here's Miriam Pawel on how nervous Newsom should be. 👉 N.Y. Times

While experts have doubts that the U.S. can reach herd immunity, they tend to be more optimistic about California. Some even suspect San Francisco, where vaccine hesitancy is the lowest statewide, has already hit the threshold. "I think we will get there before the rest of the U.S.," said Dr. George Rutherford, a UCSF epidemiologist. "I think the rest of the U.S. will catch up to it, or get to a point where transmission will go way, way down." NBC News | SFGate.com

There's a pocket of North Berkeley where 99% of people over 16 have gotten at least one vaccine dose. KGO 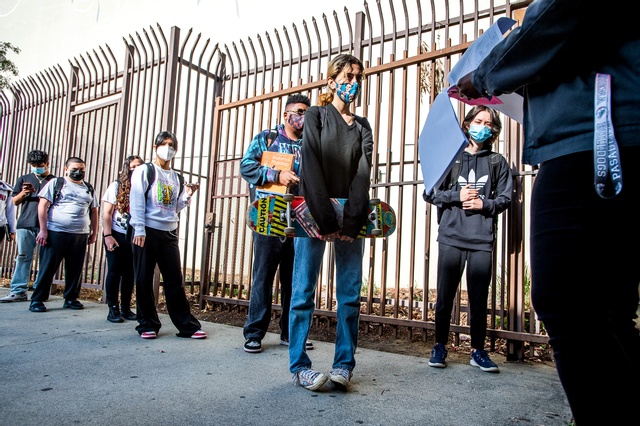 An analysis of new state data revealed that 55% of California public school students remained in full distance learning as of April 30. A few other figures:

The bottom line, according to one school consultant: “The data shows complex connections to a variety of issues that ultimately disadvantage poor kids." EdSource 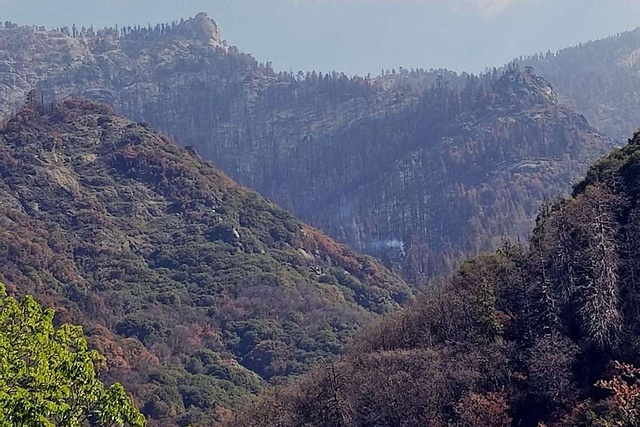 Smoke could be seen rising from a giant sequoia in Sequoia National Park on April 22.

Crews surveying the effects of an August wildfire in Sequoia National Park made a startling discovery: a giant sequoia tree was still smoldering nine months later. The endurance of the fire demonstrated how remarkably dry conditions have been this year — and how primed they are for a repeat of last year's blazes. Visalia Times-Delta | A.P. 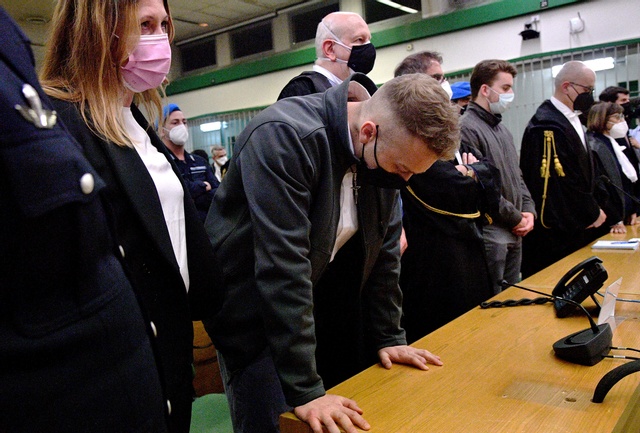 Finnegan Lee Elder reacted after the court decision in Rome on Wednesday.

A jury in Rome on Wednesday convicted two Bay Area men in the 2019 stabbing death of a police officer, handing them the harshest possible sentence: life in prison. Finnegan Lee Elder and Gabriel Natale-Hjorth, schoolmates from Mill Valley then 19 and 18, were on vacation in Italy when the killing resulted from a small-time drug deal gone bad. The killing shook Italy, where leaders portrayed it as a national wound. Washington Post | Reuters

New attacks on Asian-Americans in San Francisco added to anxieties among a community already reeling from anti-Asian violence. On Monday, in an attack captured on video, a man pushing his 1-year-old in a stroller was knocked to the ground and pummeled in the head. On Tuesday, two women, ages 84 and 63, were stabbed by a man on busy Market Street, police said. They were expected to survive. Authorities arrested Patrick Thompson, 54, who had several past arrests. S.F. Examiner | KGO 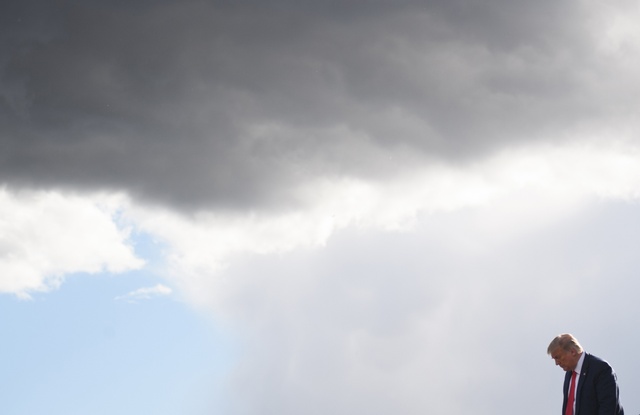 The Facebook Oversight Board basically punted a decision on former President Trump.

"Facebook has grown too powerful and the only fix is to get government legislators to come up with a way to allow more competition and to take impossible decisions out of the hands of too few people.

"Until then, it’ll be an endless and exhausting game of hot potato, in which no one wins. 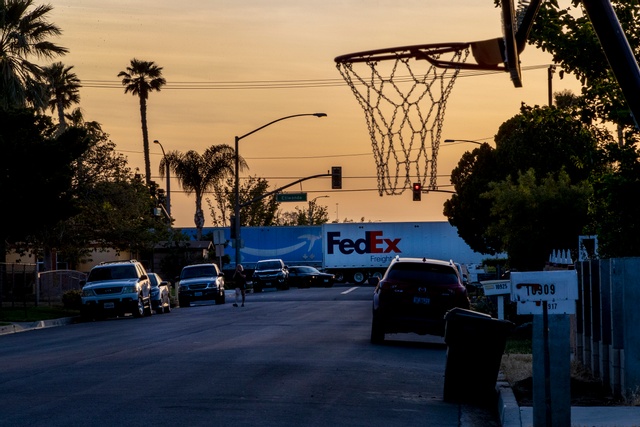 Amazon and FedEx trucks drove through a neighborhood in Jurupa Valley on April 30.

The explosive growth of warehouse distribution centers in the Inland Empire is a huge source of pollution. Roxana Barrera lives in a San Bernardino neighborhood where the asthma rate is in the 97th percentile statewide. Her toddler was prescribed an inhaler after he started wheezing. “I didn’t link it to the smog in our region at the time, but once I started to piece everything together, I thought, ‘Oh my god, this is a result of that.’” she said. “Now everywhere I look, I see semi trucks and warehouses dumping on our poor community.” L.A. Times

Dozens of Buddhist monastics, priests, and lay leaders gathered on Tuesday at a temple in Los Angeles's Little Tokyo for a ceremony aimed at helping the country heal from anti-Asian violence. They took a broken ceramic lotus blossom and filled in the cracks with liquid gold leaf, a practice that repairs flaws and makes them more beautiful. The Los Angeles photographer Rozette Rago got some gorgeous pictures. 👉 N.Y. Times 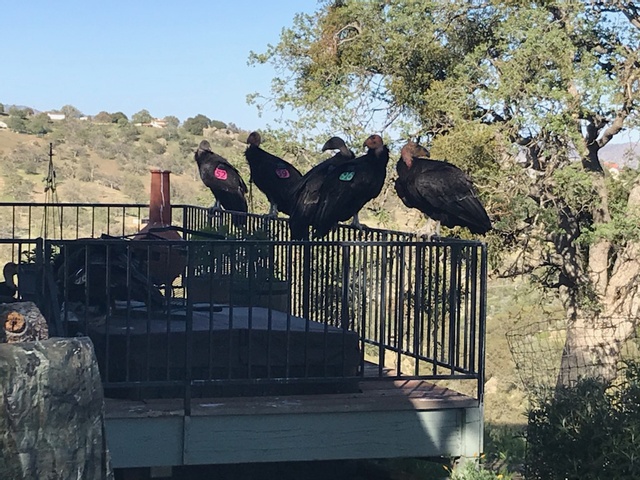 A group of giant California condors gathered at Cinda Mickols' home in Tehachapi.

A surprise was waiting for Cinda Mickols, a retired teacher, when she returned to her home in the Tehachapi Mountains on Monday after a weekend away. California condors — around 15 to 20 of them — had commandeered her deck, tearing through plants and a spa cover and pooping everywhere. The enormous New World vultures didn’t seem to want to leave.

“She drove up and saw them on her deck and roof and was just in shock,” said Seana Quintero, Mickols’ daughter. “Some flew off when she went out on the deck, but a few others she had to get close and wave her cane at.”

Mickols stands about 5 feet 2 inches. The wingspan of a California condor, the largest flying bird in North America, can stretch more than nine feet across. 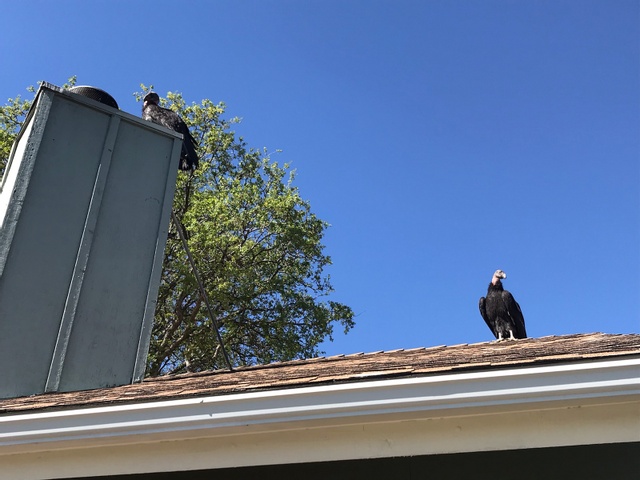 The rare condors seemed to have settled in.

The majestic creatures went extinct in the wild in the 1980s. Captive breeding programs have since brought their numbers back to about 160 in California, where they are now regularly spotted over Big Sur, Pinnacles National Park, and a release site in Kern County, near where Mickols lives.

As of Wednesday afternoon, the condors were still circling overhead, seemingly waiting for Mickols to depart, said Quintero, who has been posting updates on Twitter. A U.S. Fish and Wildlife Service employee chimed in with advice: If they return, try yelling at them or spraying them with a hose.