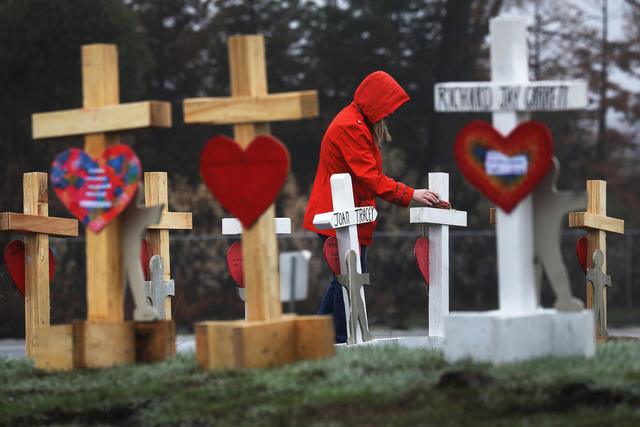 A visitor paid respects at a memorial for the victims of the Camp Fire in Paradise on Dec. 21, 2018.

PG&E is officially one of America's deadliest corporate criminals.

During a dramatic court hearing in Chico on Tuesday, the utility pleaded guilty to causing the deaths of 84 people when its crumbling equipment sparked the 2018 wildfire that destroyed the town of Paradise. One by one, the names of the dead were read aloud. After each name, PG&E's CEO responded, “Guilty, your honor.” A.P. | S.F. Chronicle

"Helpless fire dispatchers listened to their screams." A grand jury report listed the names of the victims and how they died. A.P. 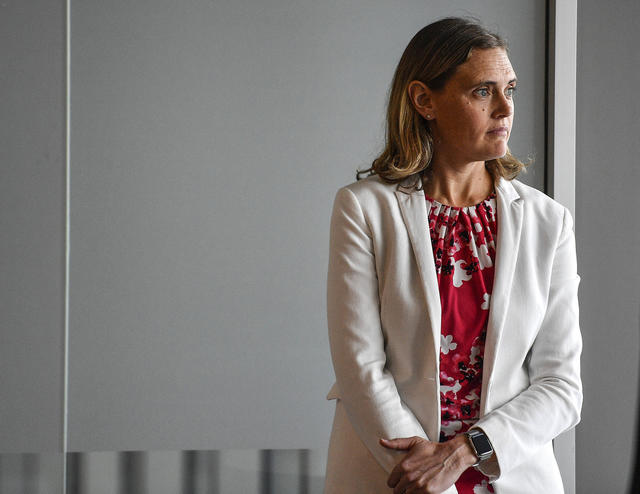 Dr. Nichole Quick quit her medical post in Orange County after being harassed.

Public vitriol toward the local health officials managing California's coronavirus crisis has become so severe that at least seven of them have quit. They've faced personal attacks, protests outside their homes, and even death threats. “The health officers are kind of in this position where everything that everyone is angry about is the health officer’s fault," one official said. He asked not to be named over concerns for his safety. CalMatters

Contact tracing is crucial to reopening the economy and keeping small clusters of the virus from exploding into outbreaks. But it only works if people cooperate. A case in point: In Butte County, 163 worshippers were exposed to infection during a Mother’s Day service. But the church has refused to share information. As a result, health workers only reached 25 people. Whether any of the rest were tested or quarantined is anyone's guess. Sacramento Bee 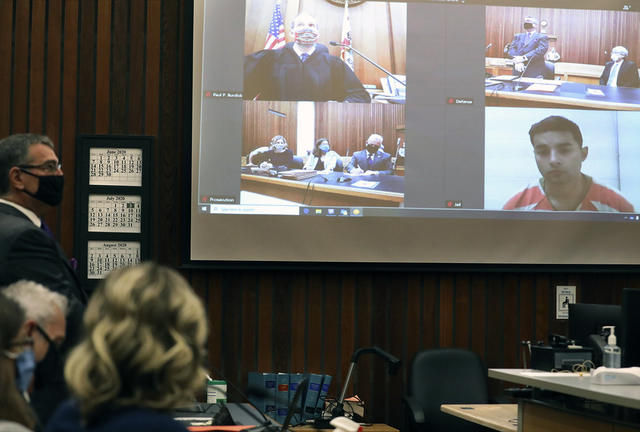 Steven Carrillo appeared by video for his arraignment in a Santa Cruz courtroom on Friday.

The fatal shootings of a federal security officer in Oakland on May 29 and a sheriff's deputy in Santa Cruz County a week later were carried out by the same man, federal authorities said Tuesday. Announcing murder charges, officials said Steven Carrillo, a 32-year-old Air Force sergeant, had ties to the far-right “boogaloo bois” movement and hatched the plan during an online chat with accomplices. A.P. | Mercury News 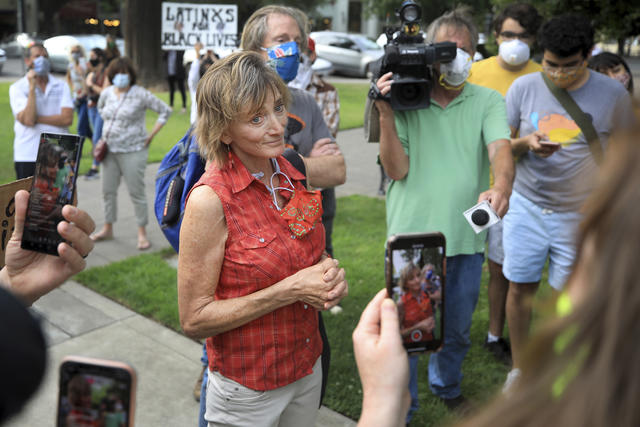 Mayor Leah Gold got into a pointed exchange with protesters in Healdsburg on June 15.

During a City Council meeting on June 1, the mayor of Healdsburg, a small town in Northern California's wine country, said the city didn't have a particular problem with police aggression. Protests and a petition followed demanding she step down. On Tuesday, she did so, but accused her critics of twisting her words. "I don’t really need this in my life, with people making up stories,” she said. Press Democrat | SFGate.com 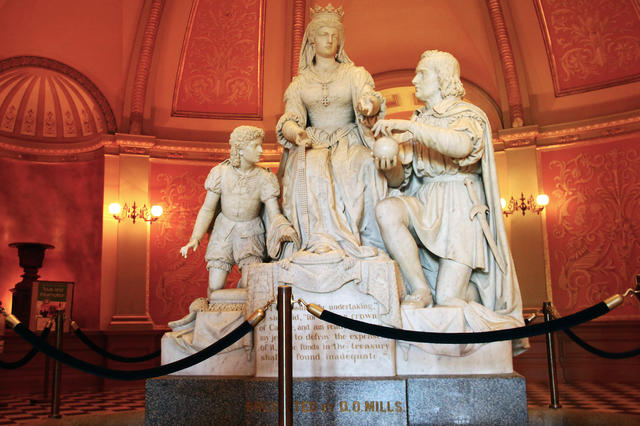 The statue depicts Columbus appealing to Queen Isabella I, who financed his voyage to the New World.

State lawmakers ordered the removal of a Christopher Columbus statue that has been the centerpiece of the California Capitol rotunda since 1883. Critics have long sought the move, pointing to the Italian explorer’s role in the destruction of indigenous cultures. Souring sentiment toward controversial monuments after the George Floyd protests gave the campaign momentum. Sacramento Bee | Capitol Public Radio

Also to be stored away: the bust of an accused Nazi sympathizer at a San Francisco museum. N.Y. Times

"This shit is really vicious out here."

The YouTube channel CharlieBo has drawn a large following by venturing into America's forgotten corners and interviewing people on the street. Vice placed the channel within a new genre of amateur explorers that it calls DangerTubers. CharlieBo's latest stop: The Sunnydale projects, one of the most violent areas of San Francisco. YouTube (~8 mins)

On March 23, 2017, Phillip Garcia was in psychiatric crisis. Held down by restraints in a Riverside hospital's detention care unit, he struggled desperately to break free. Hours later he was dead. Here's a harrowing report, a year in the making, on how guards responded with force as Garcia called out for help and why no one was held accountable. ProPublica 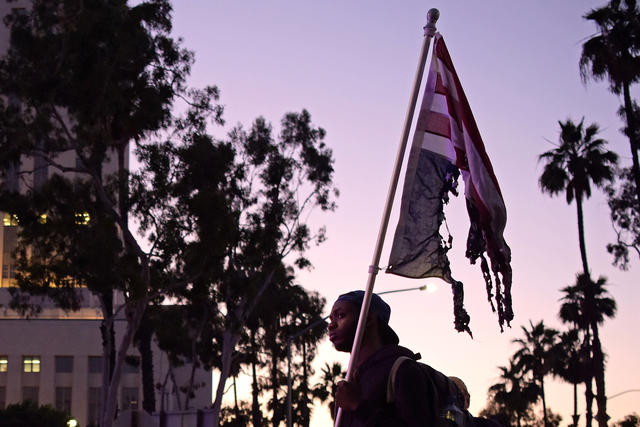 The George Floyd protests have forced policymakers to rethink policing.

Los Angeles is now moving to focus police officers more narrowly on criminal matters. Under the proposed model, when someone is in distress, a mental health specialist would be dispatched to render aid instead of an armed officer to make an arrest. "We need to reimagine public safety in the 21st century," one lawmaker said. L.A. Times | CBSLA 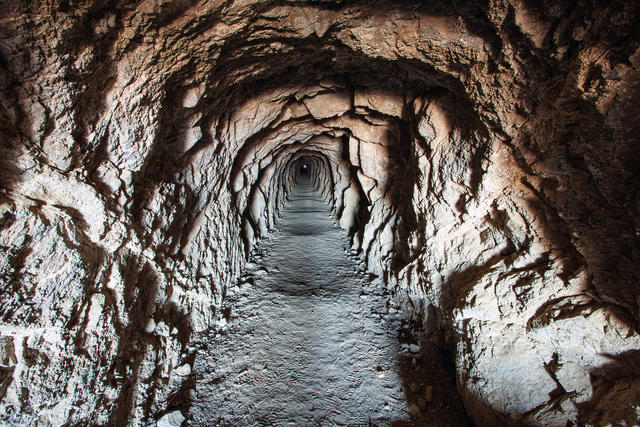 The Burro Schmidt Tunnel is pointless, inspiring, or something in between.

A lone prospector spent 32 years digging a half-mile tunnel into the solid granite of the El Paso Mountains for the purpose of transporting ore. But in the meantime a road was built, making the route unecessary. So he never used it.

Beginning in 1906, William Schmidt used hand tools and carefully placed dynamite to slowly burrow through the Mojave Desert range. The road was completed in 1920, but by then, he declared, he was obsessed. So for no apparent reason, Schmidt kept digging for another 18 years. Upon completion, he packed up and lived out his days in a nearby town.

The Burro Schmidt Tunnel lives on today as a tourist attraction and a monument to desert lunacy. KCET | Atlas Obscura

Today, Richard Stenger, a former national park ranger, offers his picks for the state's northwest, stretching from Sonoma County to the Oregon border. 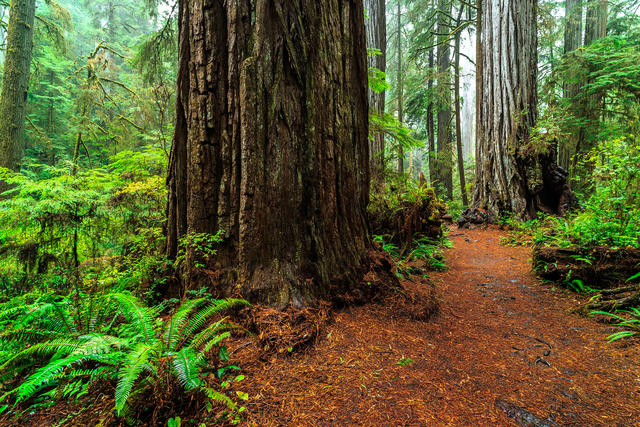 The giants of Stout Grove appear to hold up the heavens.

Not the tallest or biggest, but this stand of coastal redwoods on an overlooked gravel road along the Wild & Scenic Smith River, California’s most pristine waterway, delivers one of the most pristine forest experiences. The trees soar in aesthetically pleasing straight lines into the sky from a quiet, remote, and lush alluvial flat. 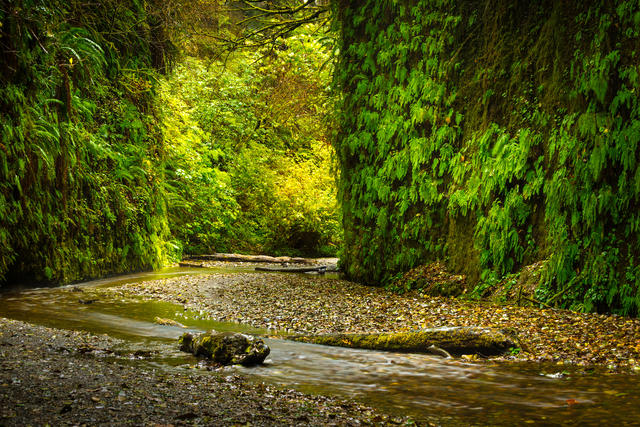 The vertical walls at Fern Canyon host a riot of moisture-loving plants.

Hike in from the James Irvine Trail for classic, giant old-growth redwoods, some for the record books, which give way to Sitka Spruce and octopus trees as the path approaches the coast. It then bottoms out into Fern Canyon, an 80-foot chasm draped in rare fronds and gentle waterfall ribbons and floored by a seasonal creek, perfect for easy wading and gentle bank scrambling, made easier in the summer by wooden footbridges. Featured in "Jurassic Park 2," the canyon represents one of the oldest surviving ecosystems on the planet. 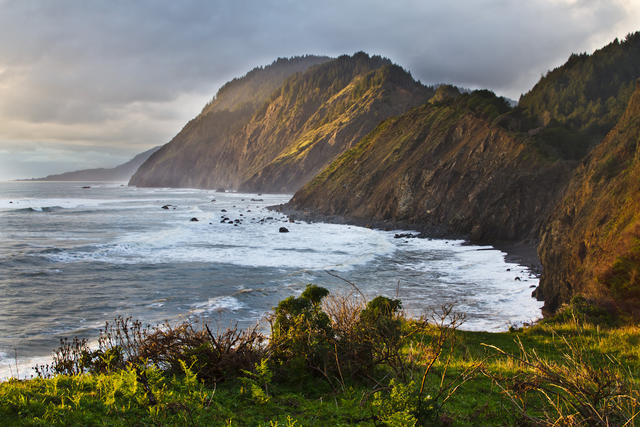 Cliffs soar from the surf at the northern end of Sinkyone Wilderness State Park.

This wild beachfront so awed the great Catholic theologian Thomas Merton that he vowed to build a monastery here. Alas, it would be his final retreat before his untimely death. He did manage to write a short book about his adventures, typed up by helpful nuns who live in nearby Whitethorn. To retrace his steps and sample the longest stretch of undeveloped coast in California, aim for Needle Point and Whale Gulch. 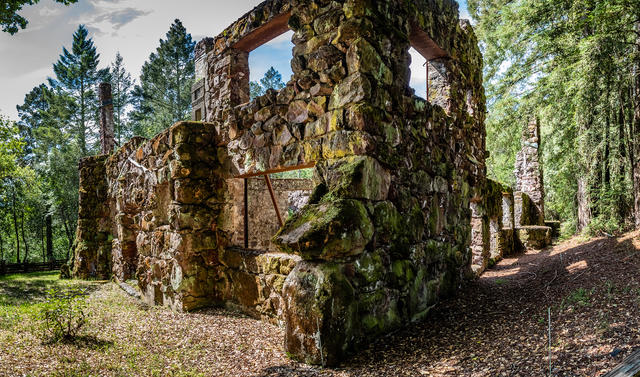 The author's ranch among the gentle hills of Sonoma County is preserved as a state park.

The final stop for one of the world’s most famous authors is found in a tract of farmland and forest in the Valley of the Moon. Nearby, his grand venture, the Wolf House, burned to the ground in 1913 before he could move in. However, the modest cottage where he penned many great words remains on his former Glen Ellen estate, along with nature trails, meadow walks, and a circular stone pig palace where his prized farm animals lived high on the hog. 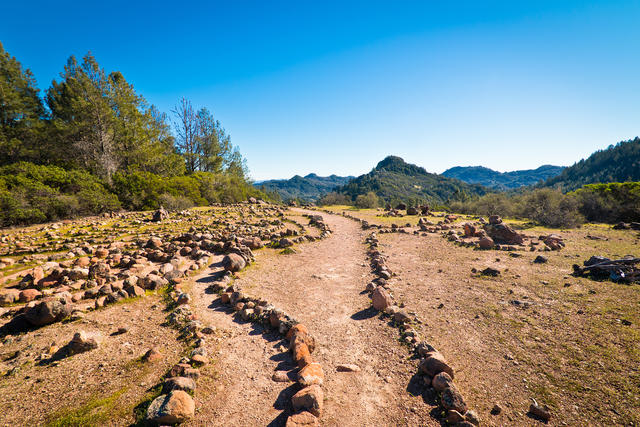 Hikers along the Palisades Trail encounter a rock labyrinth.

This day-hike loop to the precipitous edge of Napa Valley represents one of the finest hikes in wine country, a rural jaunt that closely resembles the Provence region in the south of France. "Jean de Florette" could have been filmed here, with its stark rock formations, solitude, darting hares, scraggly trees, and rugged mountain terrain. Bring ample water, choice provisions, a shade hat, and conditioned legs.

Richard Stenger, a travel writer and media guru based in Eureka, serves as chief marketing ranger for RedwoodCoastParks.com and principal of StengerMedia.com.