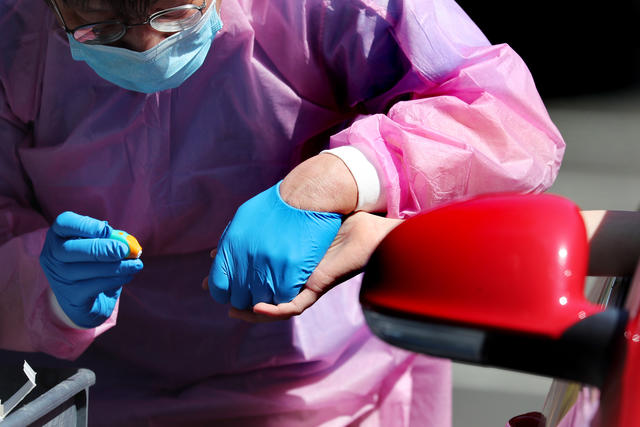 Stanford has developed a blood test that detects antibodies to the coronavirus, rather than the virus itself, and it could be released as soon as this week, Gov. Gavin Newsom said. Antibody tests are expected to play a crucial role in reopening institutions. In theory, those who show immunity could safely return to work without catching or spreading the virus. Sacramento Bee | Mercury News

California sharply reduced its COVID-19 testing backlog. About 13,000 remained pending as of Friday, down from a peak of roughly 60,000. Still, California needs to do significantly more testing. CalMatters | A.P. 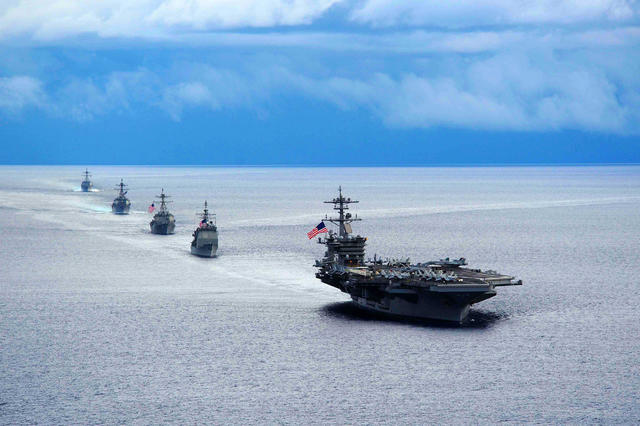 The USS Theodore Roosevelt led a formation of ships in 2014.

Kai Ryssdal, journalist and Navy veteran: "A failure of weak-kneed leadership in crisis."

Some prominent voices rose to the defense of Brett Crozier, the Navy captain who was removed from command of the coronavirus-stricken aircraft carrier USS Theodore Roosevelt. Then on Sunday, this development: Crozier himself tested positive for the coronavirus. N.Y. Times | S.F. Chronicle

Hundreds of sailors from the Theodore Roosevelt cheered for Crozier. N.Y. Times

California has secured nearly 7,000 hotel rooms for the homeless with plans to add another 8,000 as an initial goal. The "Project Roomkey" initiative is said to be the first of its kind in the nation. Within a "matter of days," one lawmaker said, the Legislature accomplished what "used to take decades." CBS News | Sacramento Bee

Here are some powerful photos of Los Angeles's homeless in the time of a pandemic. N.Y. Times

On Palm Sunday, a pastor who vowed to defy stay-home orders in Lodi was greeted by four police officers in his church parking lot hours before the service was to start. He agreed to cancel, praying with congregants at their cars. Another church about 50 miles away went ahead with a service. "WE ARE AT WAR!" the pastor wrote on Facebook. Sacramento Bee | KCRA 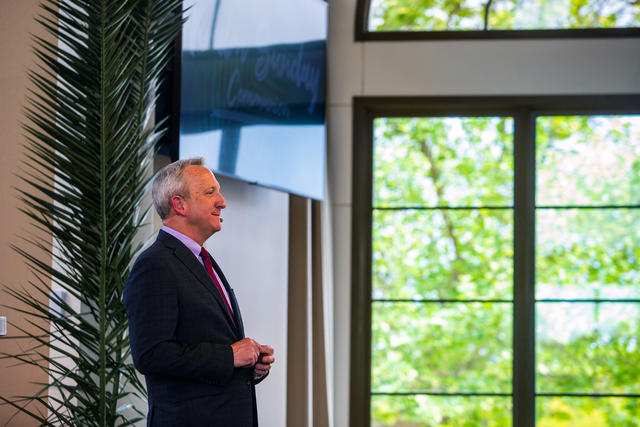 A Thousands Oaks councilman, Rob McCoy, who also serves as a pastor, quit his elected office to defy an order against holding a church service. Ventura County Star | L.A. Times

How did the Bay Area get a jump on the coronavirus? According to a new CDC study, Santa Clara County did a small survey of residents in early March and found that 11 percent of them tested positive for COVID-19. The next day, the chief health officer of Santa Clara County, Dr. Sara Cody, called a meeting of Bay Area health officials. The day after that the region was on lockdown. S.F. Chronicle | Mercury News 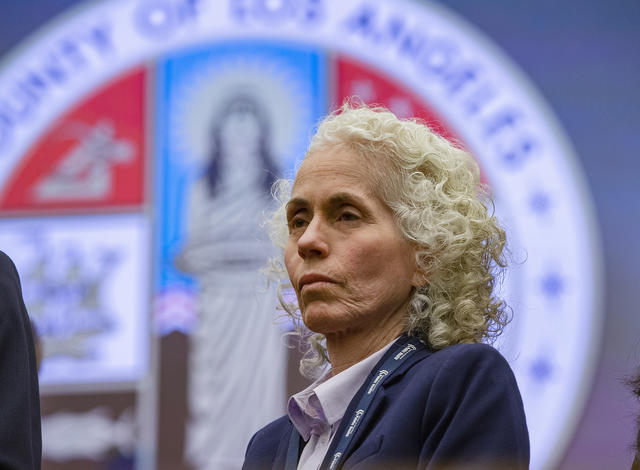 The columnist Steve Lopez profiled Barbara Ferrer, the public health director whose has emerged as Los Angeles's version of Dr. Anthony Fauci — straight-talking, respected, overworked. Ferrer has delivered daily updates on death tolls with a measure of compassion and unity, Lopez wrote. It's no act, a colleague said: "When she talks about the deaths ... she feels it." L.A. Times

First cases in Del Norte County, a mail carrier in Madera County, and 30 residents of a nursing home in Riverside. Here are the latest coronavirus totals, according to tallies by the S.F. Chronicle and N.Y. Times. 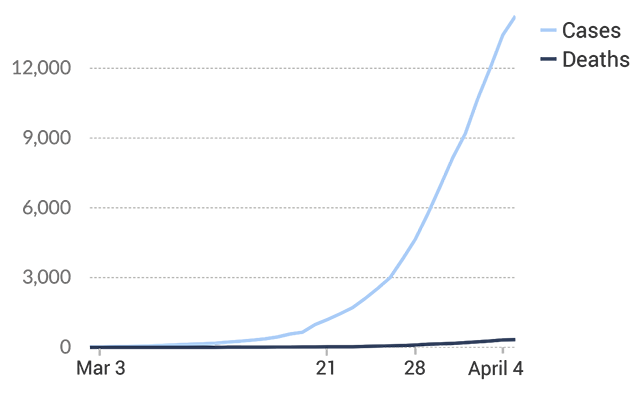 A reporter and a photographer visited Slab City, a renegade community on the ruins of a former military base in the Mojave Desert. It might seem like an ideal place to ride out a pandemic, but a general distrust of authority means few slabbers are adopting measures to protect themselves from an outbreak. Desert Sun

I ordered a chicken and an egg from Amazon.

A delightful family in Claremont has been posting a new dad joke in their front yard each day to mark the passage of time during the lockdown. Photos of the groaners were shared by a neighbor on the social network Reddit, where they've been a sensation. Harrison Klinski, 22, an aspiring medical school student cooped up in the home with his parents, told the Sun they came up with the idea to inject some levity into a dismal situation. "We just thought that laughter's the best medicine," he said.

Below, a few examples. 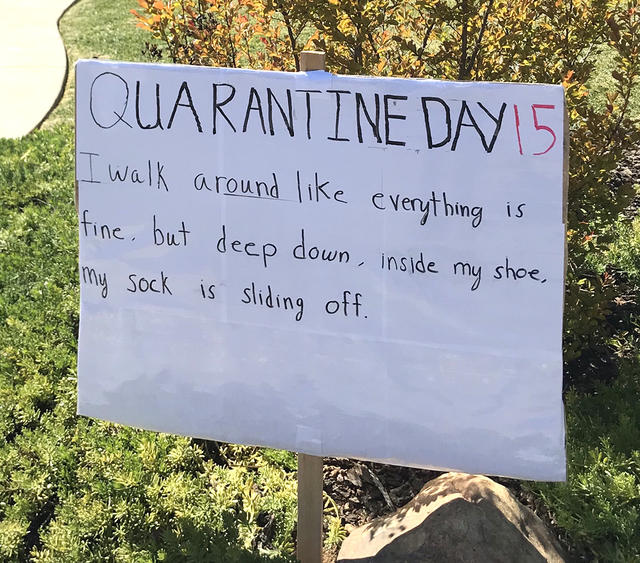 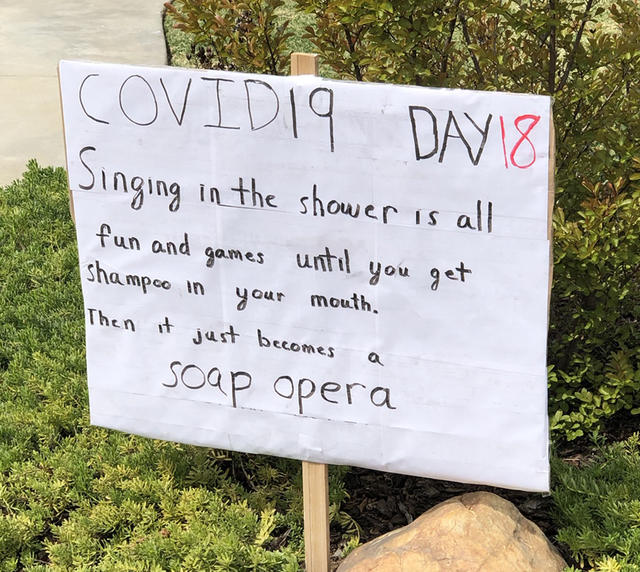 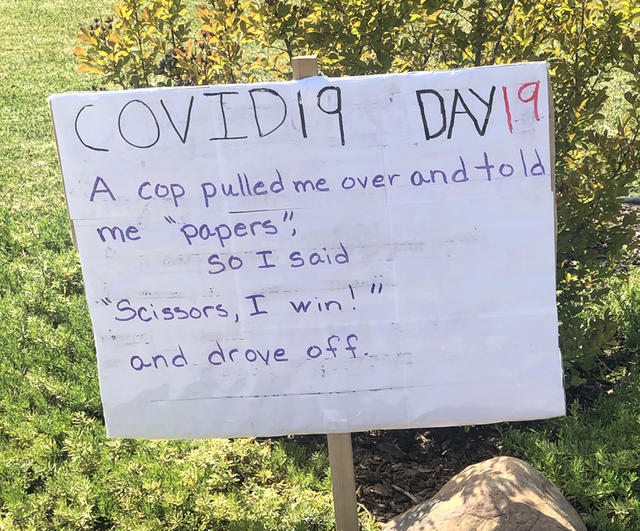 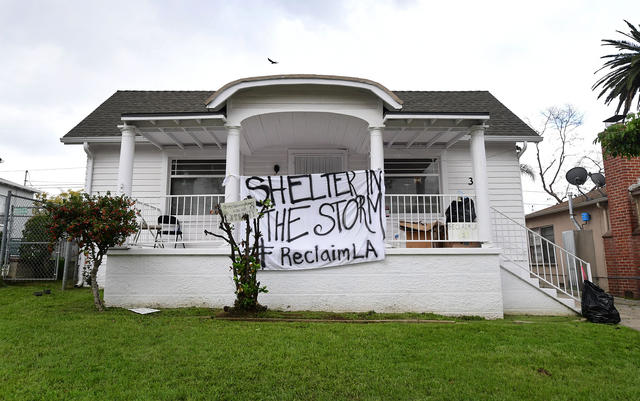 A banner hung from a home occupied by activists in Los Angeles on March 19.

A group calling themselves the "Reclaimers" have occupied a dozen empty homes in a working-class neighborhood of Los Angeles. The houses are owned by California, which bought them last century with a goal to expand a freeway. That plan was abandoned in 2018. Housing activists have been petitioning for years to make the homes available at affordable prices. The coronavirus pandemic, they now hope, will add urgency to that message. New Yorker

On Saturday, a foregone conclusion became official as Kobe Bryant was selected for enshrinement in the Basketball Hall of Fame three months after his death in a helicopter crash. The columnist Bill Plaschke imagined how Bryant might have reacted: "Here's guessing he would have been kind, embracing, inclusive, a reflection of a personal evolution that was evident in the final years of his life." L.A. Times | ESPN