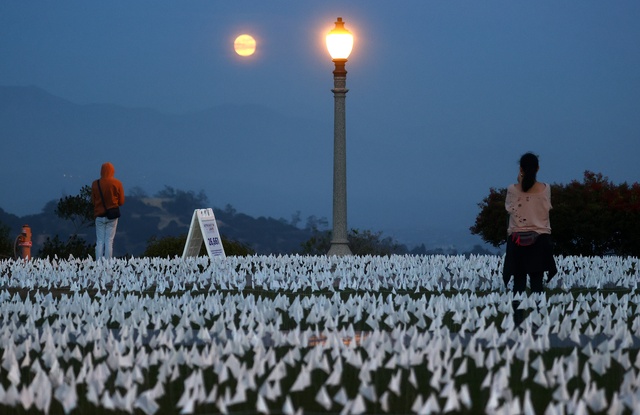 An installation outside Griffith Observatory last week honored Angelenos who have died from Covid-19.

Even as warnings of a potential winter surge have grown louder, Gov. Gavin Newsom highlighted good news on Monday: California's coronavirus positivity rate is now the lowest in the country at 1.9%. That's down from 2.2% at the start of November. Newsom also celebrated another remarkable data point: 91.3% of California adults have now gotten at least one vaccine shot. S.F. Chronicle | A.P.

Infections are surging in Colorado despite vaccination rates comparable to those of California, a cautionary tale of how quickly things can turn as the weather gets colder. L.A. Times

As the West grapples with a historic drought, research into artificial rainmaking is undergoing a small renaissance. Cloud seeding spurs rainfall by adding to silver iodide to clouds — or so its promoters say. Many scientists are skeptical it does much at all. Even so, several states — including Idaho, Wyoming, Colorado, and Utah — have embraced the technology. Washington Post

Cloud seeding has been practiced on the Central Coast for decades. Last month, an Inland Empire water agency voted to move ahead with a program of its own. San Gabriel Valley Tribune 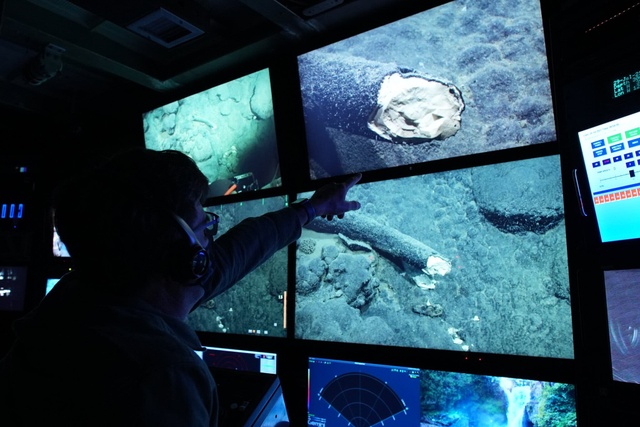 More than 100,000 years ago, a young female mammoth died along what would become California's Central Coast. Somehow its body floated 150 miles out into the Pacific Ocean, where a remote submarine piloted by Monterey Bay scientists stumbled upon its tusk in 2019 — just lying on the ocean floor. A UC Santa Cruz researcher described it as "an ‘Indiana Jones’ mixed with ‘Jurassic Park' moment.” N.Y. Times 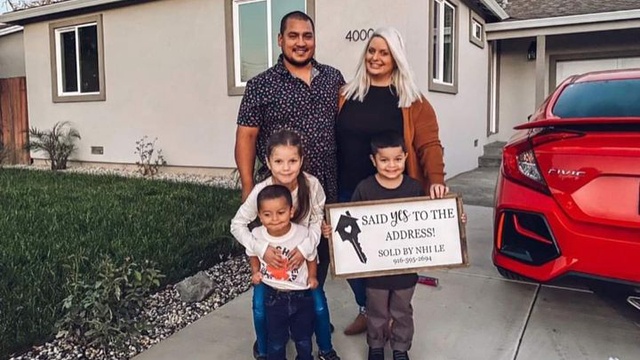 The Montano family were traveling for a Thanksgiving vacation when their vehicle was struck.

A wrong-way driver suspected of being drunk slammed head-on into a Honda Civic along I-80 east of Sacramento on Saturday, killing all but the youngest member of a family of five, the authorities said. Julian Montano, 4, lost both of his parents, his 9-year-old sister, and his 5-year-old brother. The wrong-way driver was hurt, but survived. "They were really that picture perfect family," Michelle Gonzalez, an aunt to Julian, said through tears. KCRA

A GoFundMe was set up for the family.

“They’re actually a gang with badges. That’s what these guys are.”

Chris Gurr and Ann Marie Borges were running a legitimate cannabis business in Mendocino County. Still, law enforcement officers raided their farm with guns drawn and hauled away plants over accusations that the farm diverted water from a creek, which a study later found to be unlikely. The business owners wondered: Would a winery have faced an armed raid and confiscation of their inventory? Gurr and Borges, along with two other marijuana growers, have now filed a lawsuit that accuses police of conspiring to steal marijuana and cash. NBC Bay Area 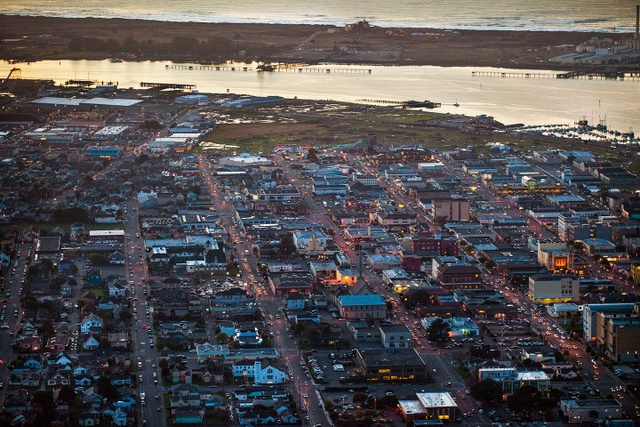 High-end retailers in San Francisco; pot shops in Oakland; a Nordstrom store in Walnut Creek; a jeweler at a Hayward mall; and a Lululemon and Sunglasses Hut in San Jose. As the accounting of last weekend's mass robberies came into clearer focus, authorities across the Bay Area convened Monday to discuss a regional approach to stamping out the crime. In San Francisco, Gov. Gavin Newsom said the state would step up its help. “We want real accountability," he said. "We want people prosecuted and we want people to feel safe. Mercury News | S.F. Chronicle

☝️ Here's a typical Friday night in San Francisco. Founded in 1989, Midnight Rollers Friday Night Skate is a weekly party on wheels. Rollerskaters decked in neon cover a 12-mile loop through the city, dancing all the way. At its height in the late 1990s, more than 700 skaters attended. These days it's more like 50, but the energy is as strong as ever. Someone shared a fun video from a ride this month on Reddit. 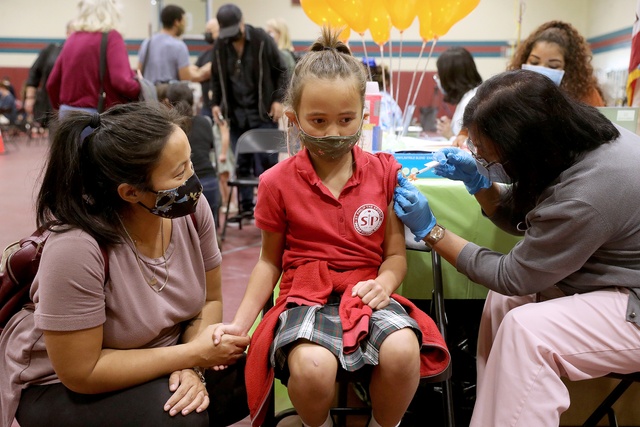 Adeline Fahey, 6, braved her shot at Eugene A. Obregon Park in Los Angeles on Nov. 3.

Roughly 44,000 students in the Los Angeles public school system failed to meet a Covid-19 vaccination deadline on Sunday, raising the prospect of thousands of kids being barred from classrooms in January. Officials said about 79% of students complied with the vaccine mandate, which is among the nation's strictest and applies to children 12 and up. L.A. Times | City News Service

“This is a staggering seizure."

Border officials at the Otay Mesa Port of Entry made what appeared to be the largest meth bust in U.S. history last Thursday, seizing 8.8 tons of methamphetamine and 389 pounds of fentanyl from a tractor-trailer, officials said. Carlos Martin Quintana-Arias, a Mexican resident, was arrested. In August, federal authorities made what they then called the largest ever meth seizure at the same border crossing, finding nearly three tons of the drug in another big rig. The Guardian | S.D. Union-Tribune

With roughly one in five community college students reporting homelessness in California, Long Beach City College is taking a drastic step: It set aside a parking lot for students to sleep in their cars. Officials said it could be the first program of its kind at a public college in California. They described it as a temporary solution, but the housing problem is unlikely to go away anytime soon. EdSource 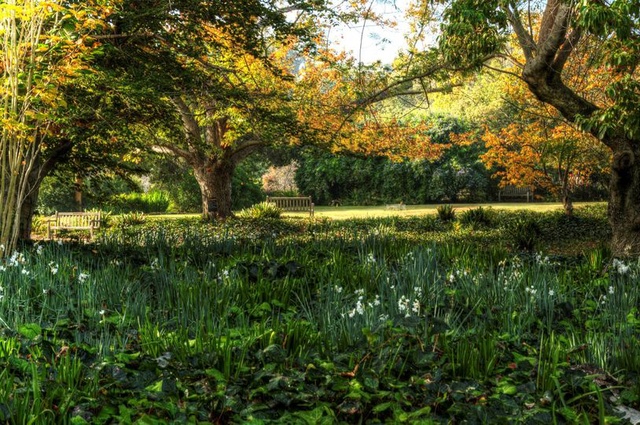 ☝️ It can be easy to forget that there are places like this around Los Angeles. The Los Angeles County Arboretum and Botanical Garden is a 127-acre oasis of more than 12,000 plants arranged by continent. The fall colors at the garden are brilliantly varied as nonnative plants respond to different climactic triggers. Now turning: Freeman's maples, crepe myrtles, pomegranates, and Chinese pistache. Frank McDonough, a botanical consultant at the arboretum, shared recent photos with California Fall Color.

Monday's newsletter referred incorrectly to Dodger Stadium. It is the third oldest major league ballpark, not the second.