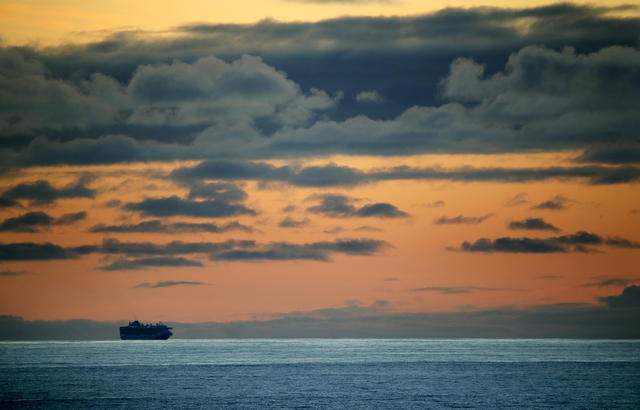 The Grand Princess sat off the coast of San Francisco on March 7.

"Oh, crap, the ukulele concert is going to be canceled."

On March 4, the Grand Princess notified passengers that the CDC was investigating coronavirus cases in California possibly linked to the ship. That day, passengers took line-dancing classes, played bridge at shared tables, and crowded into a lecture on Clint Eastwood movies. More than 1,500 people on Carnival's cruise ships have since been diagnosed with Covid-19. Dozens have died, and the lawsuits are just beginning. Bloomberg

Nearly 1,000 Californians have died from the coronavirus. The L.A. Times told some of their stories. L.A. Times

Deadliest days yet in L.A. County and the Bay Area, a record number of infections in Fresno County, and 51 infections at a Safeway warehouse in Tracy. Here are the latest coronavirus totals, according to tallies by the S.F. Chronicle and N.Y. Times: 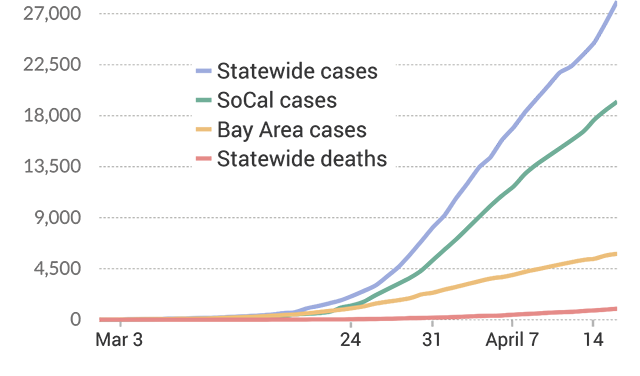 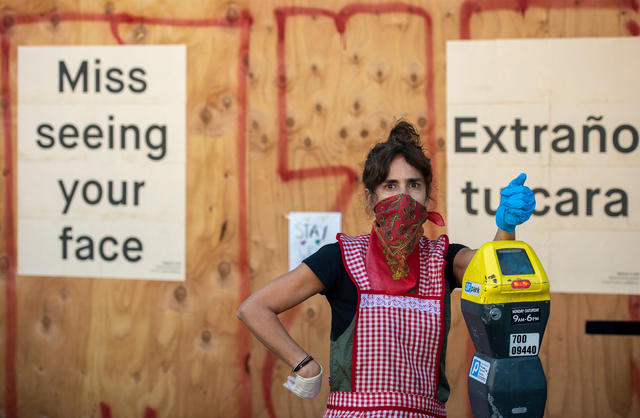 Restaurant owner Lorena Zeruche prepared for take-out only in San Francisco on April 1.

Health officials across the Bay Area are working on plans to relax shelter-in-place rules for 7 million people across the region beginning on May 4. Outdoor activities would likely be first to open up, officials said, but small gatherings could also be allowed. "We may start with gatherings of under 10 people and see how that goes," one health official said. S.F. Chronicle | Santa Cruz Sentinel

And Los Angeles? The county's top health official spoke of easing restrictions "later on in the month of May." L.A. Times

"Honk if you're healthy."

There are rumblings of dissent in Gold Country. On Wednesday, more than 100 people gathered in downtown Sonora, nestled in the foothills east of Stockton, to protest business closures. They argue small towns that haven't been hit hard by the virus shouldn't face the same restrictions as big cities. The surrounding county has reported just two infections. CBS13 | Union Democrat 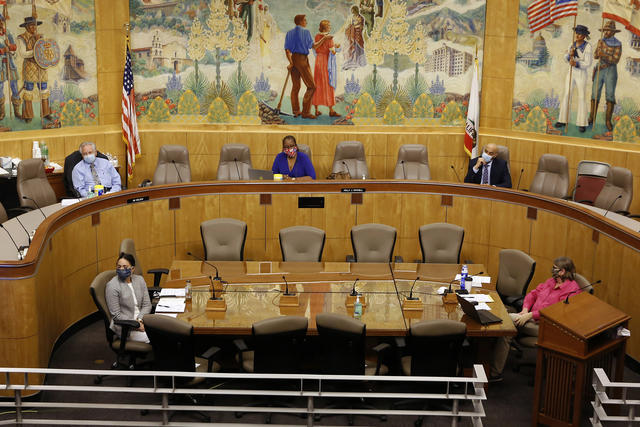 Lawmakers and staff members kept their distance at a budget hearing in Sacramento on Thursday.

Prepare for a revenue loss akin to the Great Recession, budget experts told the state Legislature on Thursday in the first legislative hearing since lawmakers left Sacramento to work from home in mid-March. Analysts said the state was expected to blow through its record $17 billion budget surplus, and face deficits of more than twice that much. Sacramento Bee | Bloomberg

An analysis of tree ring data concluded that California and the West are now in the grip of the worst "megadrought" in more than 1,200 years. According to a group of scientists, that means the three wetter winters since the end of a crushing five-year drought in California have merely been a blip in what is likely a decades-long drought. A major cause, according to the study: man-made global warming. KQED | S.F. Chronicle 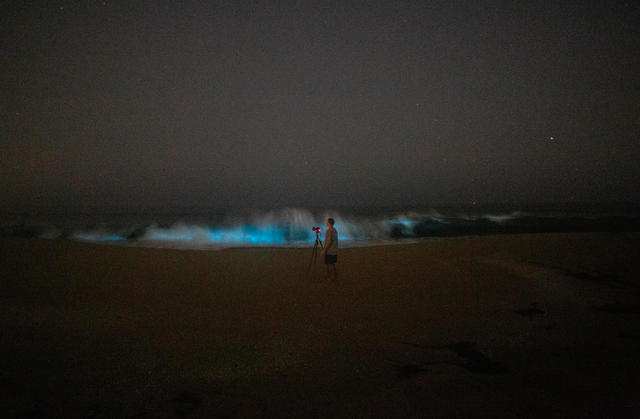 "Once you see it, your mind is blown."

The waters off Newport Beach have been shimmering with bioluminescent waves. The phenomenon known as bioluminescence is caused by tiny plankton that emit a bluish light when agitated. The photographer Royce Hutain shared the image above, captured Wednesday night. O.C. Register

Here's a short video clip of one of the waves crashing. YouTube 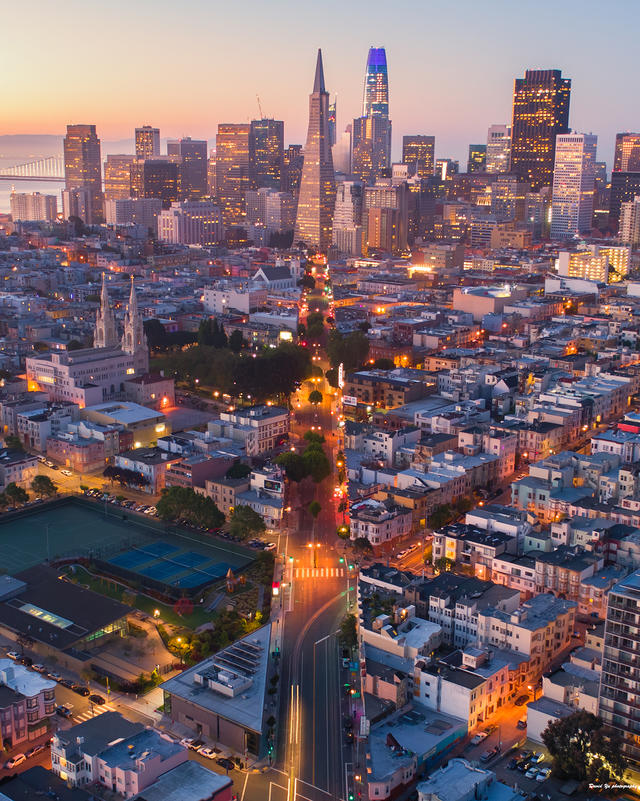 San Francisco "looks better than it ever has," Carl Nolte said.

On this week's California Sun Podcast, host Jeff Schechtman talks with the veteran San Francisco columnist Carl Nolte. Even as other commentators have disparaged San Francisco as overrun by elitism and homogeneity, Nolte offered an ode to a place of diversity, invention, and otherworldly beauty. The pandemic is now threatening all that, he added. "I just wonder if the city is going to come back the way it was. And I sure miss it." California Sun Podcast 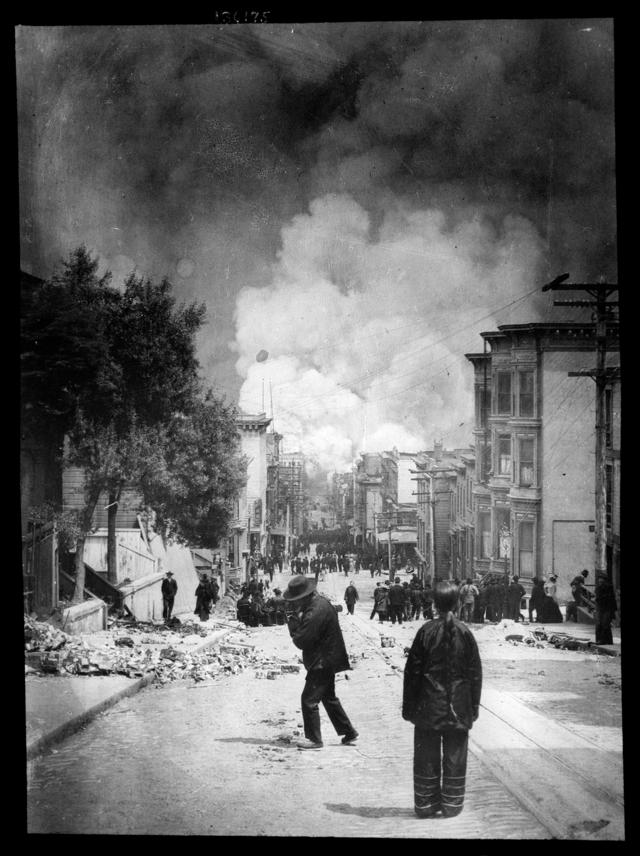 Residents of Chinatown watched a fire burning in San Francisco on April 18, 1906.

"Let us have no more Chinatowns in our cities."
— Oakland Enquirer, April 1906

On Saturday, it will be 114 years since the 1906 San Francisco earthquake. Subsequent fires lasted for days and laid waste to most of the burgeoning city, including all of Chinatown.

Chinese laborers had arrived to California in large numbers as part of the 1848 Gold Rush and the western expansion of the railroads. A distinct community rose in the heart of San Francisco with thriving businesses of both legitimate and ill repute.

Anti-Chinese racism was widespread. For San Francisco’s political establishment, which viewed Chinatown as a haven of sin and corruption, the earthquake presented a convenient excuse to expel its roughly 15,000 inhabitants for good.

It didn't fully recognize, however, the economic clout the Chinese enclave had amassed. Many inhabitants owned their properties, and weren't about to be muscled away. They allied with white property owners, who profited handsomely from charging high rents and firmly supported Chinese return. 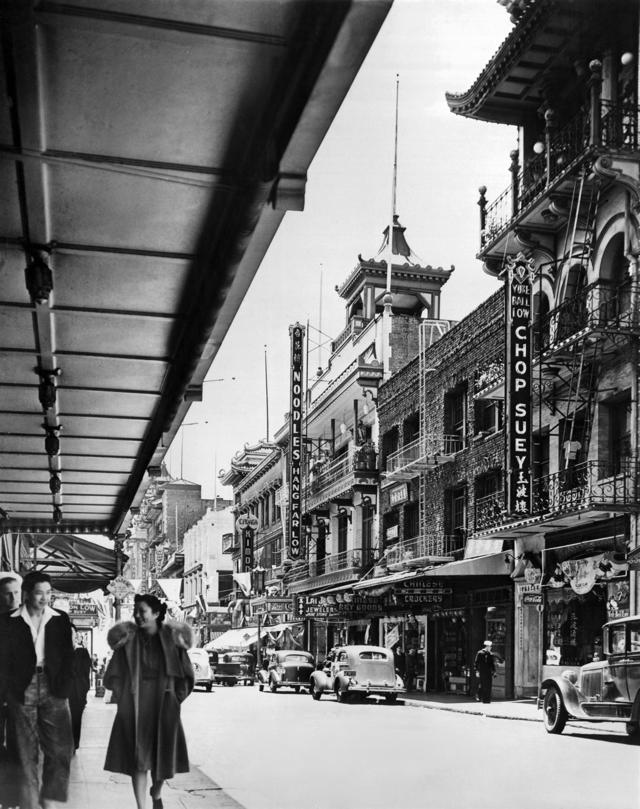 A view of San Francisco’s rebuilt Chinatown in 1945.

Moreover, San Francisco had grown to rely on the tourism and tax revenue that the community generated. Almost as quickly as the anti-Chinatown forces mustered, they disbanded.

The neighborhood's leaders seized upon the blank slate created by the disaster to rebuild with tourists as a primary consideration. Where brick, Italianate architecture once stood, buildings rose with "imitation oriental" designs including Pagoda-style flourishes and dragon motifs. It bore little resemblance to any place in China, but tourism only increased.

Within a few years, Chinatown grew to become a larger force in the city's cultural and political life than ever before.

On the centennial of the 1906 earthquake, the Chinese Historical Society of America created an exhibit with archival photos and firsthand accounts of Chinatown's experience of the disaster. You can see an online version, hosted now at Google Arts & Culture. 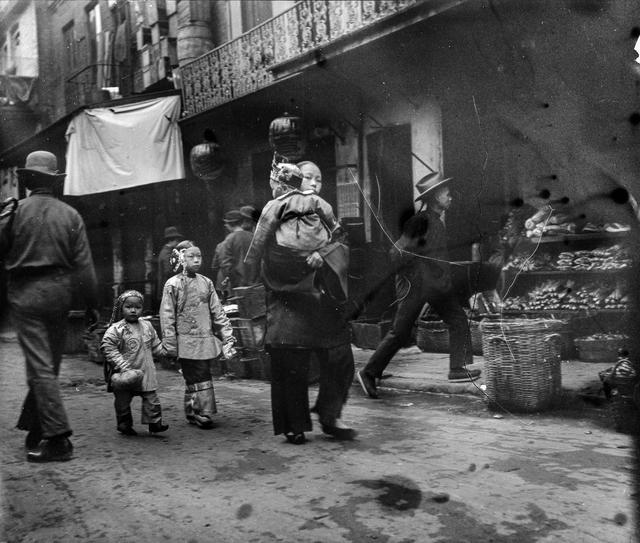 What was San Francisco's original Chinatown like? The German photographer Arnold Genthe captured hundreds of photos of the vibrant community between 1896 and 1906. Mashable 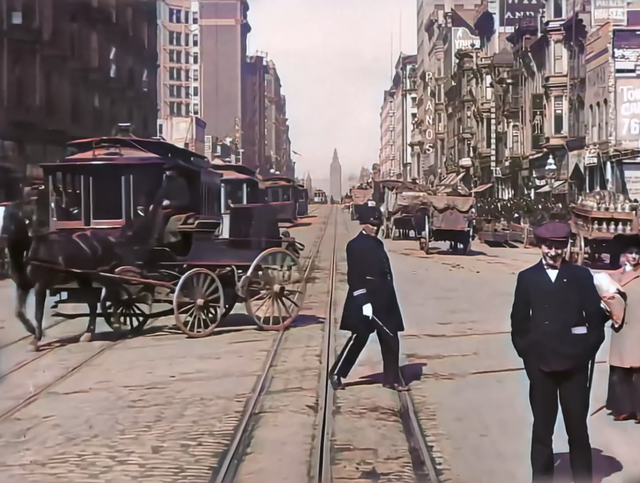