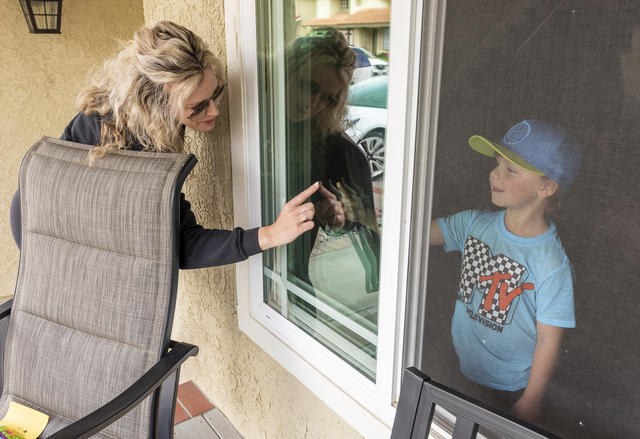 K-12 schools could reopen as soon as late July for an early start to next school year. Gov. Gavin Newsom made the startling proposal Tuesday as he laid out a vision for gradually reopening California. He said nothing had been decided, but added: "There's been a learning loss. And you can either just roll over and just accept that or you can do something about that." EdSource | S.F. Chronicle

Stanford may delay the fall quarter. U.C. San Diego is planning for a mix of in-person and remote instruction. Here's an updated list of universities' fall plans. Chronicle of Higher Education 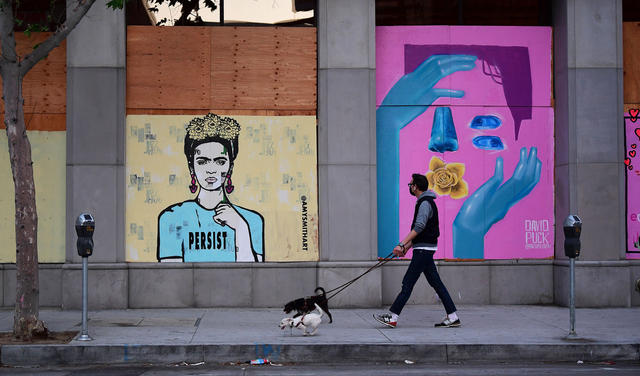 A man walked past boarded-up shopfronts in Los Angeles on Tuesday.

Newsom announced a four-phase plan to reopen the state. We're now in phase one, but officials plan to introduce phase two in the next few "weeks, not months," he said. That means:

Phase three would include reopening places like gyms and nail salons. Phase four would mark the end of the shutdown, with concerts and conventions allowed. That's likely far off. A.P. | L.A. Times

A Fresno City Council member lashed out over business closures: "The bottom line is we have a constitution," said Garry Bredefeld. "This is America. You don't get to destroy people's lives and their livelihoods." KSEE | Fresno Bee

America's two most populous states have chosen diverging paths. Texas is allowing its malls, restaurants, and movie theaters to reopen on Friday. "The lives saved are priceless, but the price has been steep," Gov. Greg Abbott said on Monday. That same day, Newsom scolded Californians for crowding at beaches and said his stay-home order would stand. Bloomberg 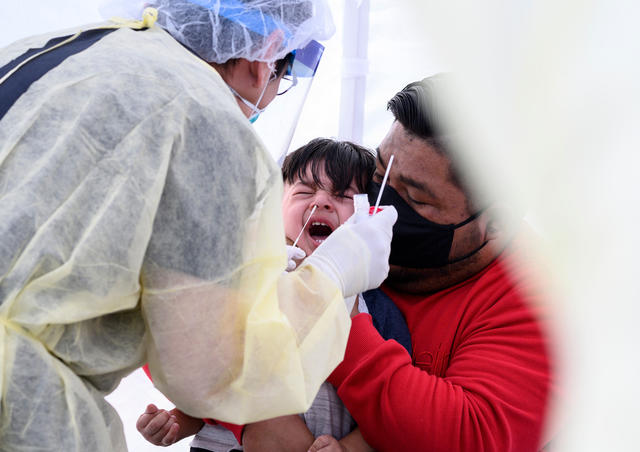 Jose Vatres, right, held his son Aidin as he was tested for Covid-19 in Compton on Tuesday.

Five people die and 94 others test positive at a Turlock nursing home, new data shows 40 percent of deaths statewide are from eldercare homes, and the number of hospitalizations in Orange County hits a new high. Here are the latest coronavirus totals, according to the S.F. Chronicle and N.Y. Times: 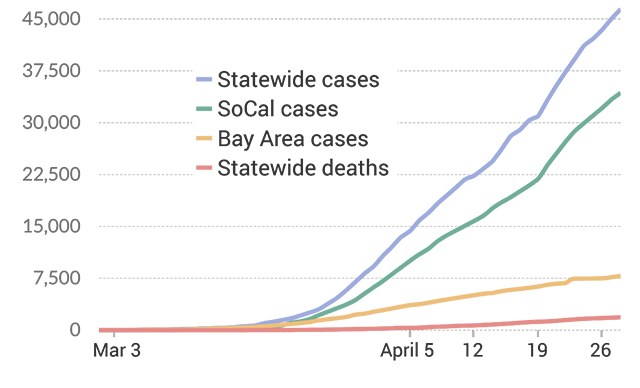 Hair salons seem to be emerging as frontline resisters of the lockdown. In recent days, businesses have reopened in Corona, Vacaville, Auburn, Winters, and Chico in open defiance of stay-at-home orders. ​"It's a survival tactic at this point," one owner said. KRON

Also flouting the shutdown: A gym in Sacramento and a Jiu Jitsu studio in Redding. Sacramento Bee | Record Searchlight 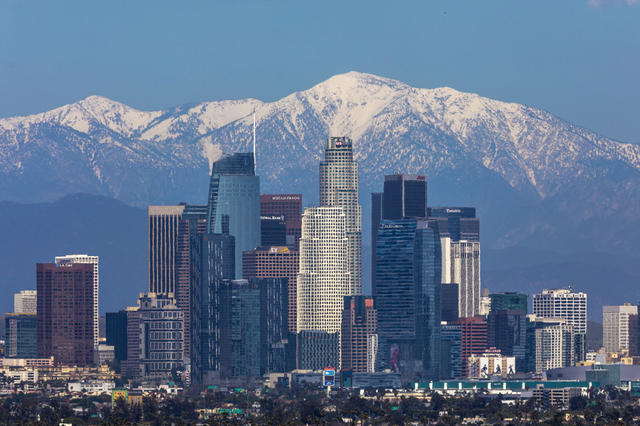 The Los Angeles skyline set against the San Gabriel Mountains on April 14.

Southern California is experiencing unhealthy air days again. After a run of crystal clear skies that was credited to the emptying of the region's freeways, hotter, drier weather has now replaced the showery days of March. And the hot sun, experts explained, plays a huge role in the formation of ozone. L.A. Times

Snake River Farms, a family-owned farm in Idaho, donated $2 million worth of American Wagyu steaks to the Bay Area to be handed out by food banks. That means 35,000 people will find in their grocery bags a $60 steak usually sold to high-end restaurants. "It's kind of a random thing to have come up," a charity official said, "but it'll be really nice to see people's faces when they get something they really weren't expecting." S.F. Chronicle 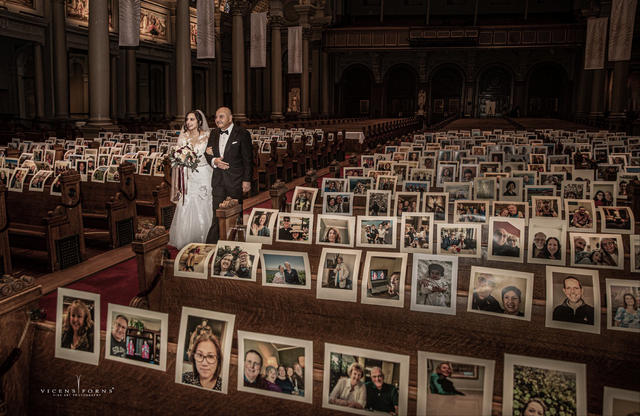 Emily Manashi and her father walked down the aisle at San Francisco's St. Ignatius church on Saturday.

In one fundraising email, Rep. Devin Nunes offered those who paid $30 an exclusive "Deep State Russia Hoax Puzzle," featuring the faces of Barack Obama, Hillary Clinton, James Comey, and Robert Mueller on Russian Babushka dolls. In another, the Central Valley Republican explained how he had uncovered a plot by the left and the "fake news media" to overthrow President Trump. The messaging has been very effective. Nunes's haul from the first quarter of 2020: $4 million. McClatchy

After a thumping in the 2018 midterms, California Republicans cried foul over Democrats' use of ballot harvesting, the sinister-sounding but legal practice of campaign workers collecting mail-in ballots from voters and dropping them off at polling places. Then the coronavirus happened. Now Republican leaders are demanding again that the practice be banned. Politico

L.A. County voted to send a mail-in ballot to every registered voter in the county before November. An election official said the model was likely to be adopted statewide. LAist 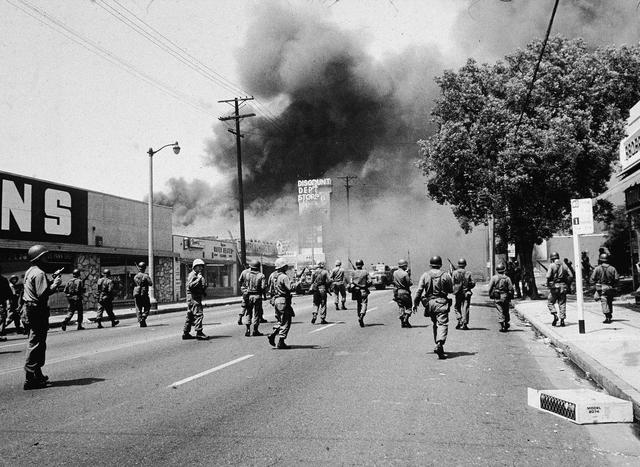 Mike Davis, author of "City of Quartz," has a new book out on the radical politics of Los Angeles in the 1960s. Asked if the city was ever likely to erupt again, he said, "I'm a wild, extreme leftist, but to me it's clear that global capitalism can no longer guarantee the survival of the human race." Also: "This seems an age of catastrophe, but it's also an age equipped, in an abstract sense, with all the tools it needs. Utopia is available to us." New Yorker 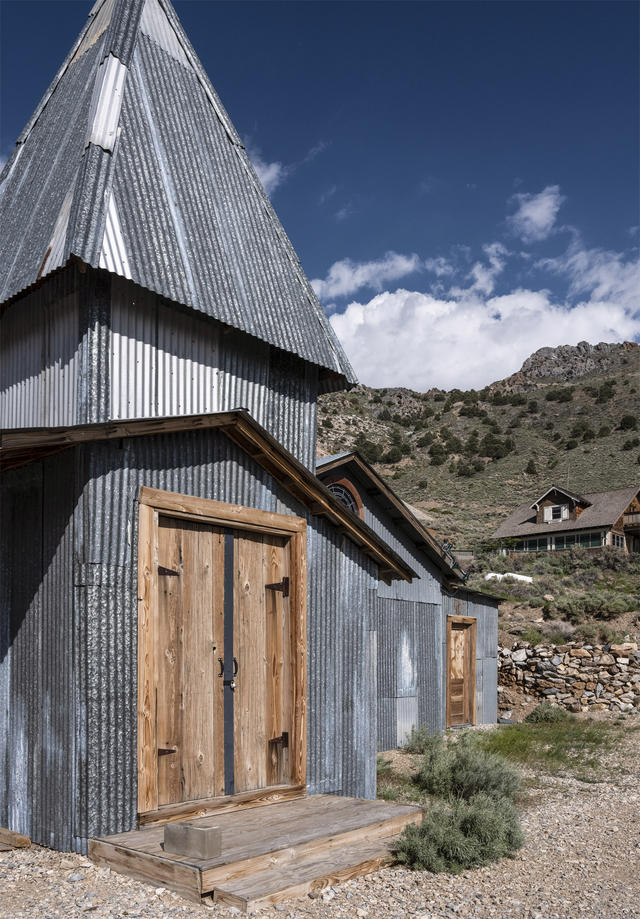 The theater in Cerro Gordo, a ghost town perched in the Inyo Mountains.

In the mountains east of Owens Valley, a ghost town famous for riches and rowdiness is being brought back to life as a tourist destination. In 2018, a pair of entrepreneurs sank their life savings into the $1.4 million price for all 300 acres of Cerro Gordo, including 22 historic structures. They expect to welcome their first overnight guests by the end of summer. California Sun