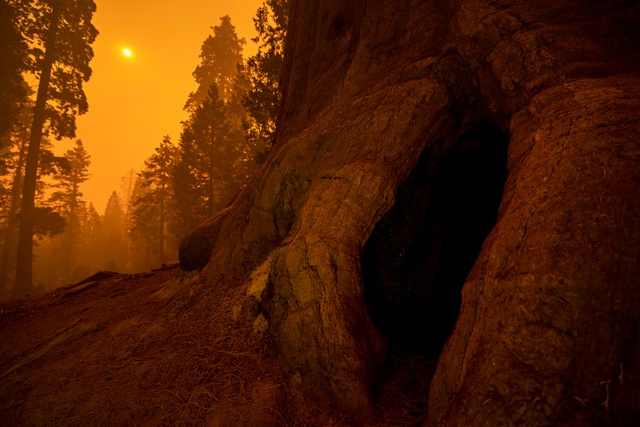 Standing in a cloud of wildfire smoke in Sequoia National Park on Thursday, Gov. Gavin Newsom signed a $15 billion climate package for California, the largest such investment in state history. Part of the money, he said, would fund forest management measures such as tree thinning and prescribed burns aimed at stopping blazes before they start. "The answer can't just be more Cal Fire engines," he said. Visalia Times-Delta | A.P.

With more schools adopting coronavirus vaccine requirements in Southern California and the Bay Area, California's top health official said Thursday that a statewide mandate was on the table. “That conversation is part of what we’re considering as a state, but no definitive action is being made at the moment,” Dr. Mark Ghaly said. California schools already require immunizations against polio, rubella, tetanus, and several other communicable diseases. S.F. Chronicle | East Bay Times

On this week's California Sun Podcast, host Jeff Schechtman talks with Gene Slater, the author of "Freedom to Discriminate: How Realtors Conspired to Segregate Housing and Divide America." He talked about how California realtors once justified racial discrimination as a high ideal in service of protecting property values. "'It's just the way it is,'" they would argue, Slater said. "It turns out this was entirely a lie." 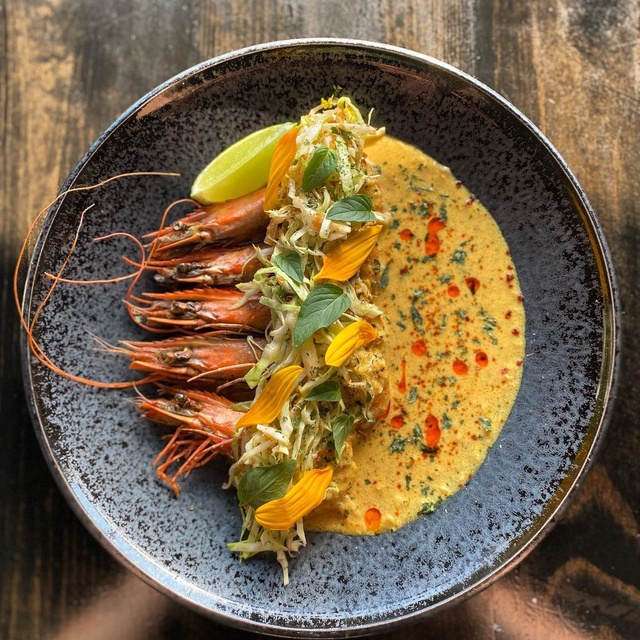 A dish from Dija Mara in Oceanside.

Aside from its fine dining focus, the storied Michelin guide also honors Bib Gourmand restaurants, those where you can order two courses and a glass of wine for under $40. Its latest edition includes 147 California restaurants, 45 of them newcomers, scattered from San Diego to wine country.

And 133 past honorees here. 👉 Michelin 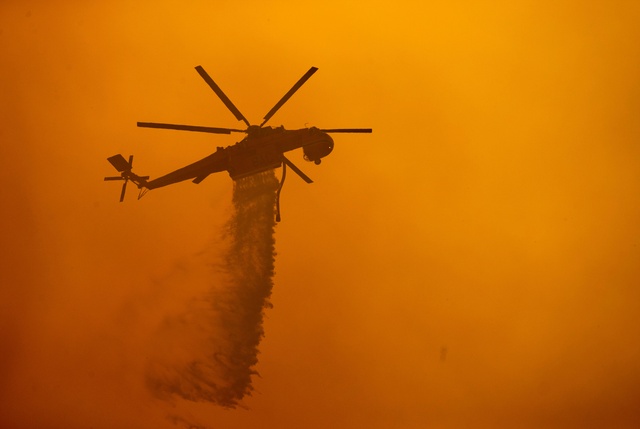 A helicopter dropped water on the Fawn fire north of Redding on Thursday.

A wildfire exploded into rural neighborhoods about 12 miles north of Redding on Thursday, destroying 25 structures and forcing residents to scramble to safety. The authorities said gusty conditions pushed the Fawn fire to roughly 9 square miles. It was just 5% contained. Alexandra Souverneva, a 30-year-old woman who showed up near the fire line and asked firefighters for medical assistance, was arrested on suspicion of igniting the blaze. A LinkedIn profile displays her title as "shaman." Record Searchlight | Sacramento Bee

When news broke in August that El Farolito, San Francisco's iconic Mission taqueria, was planning a location in North Beach, it was cause for jubilation. On Thursday, however, the planning department weighed in: The proposal was denied under the city's ban on chains. El Farolito — a local, family-run businesses — has 11 locations around the Bay Area. S.F. Chronicle

A researcher once mapped American cities by their chain-store prevalence. San Francisco was one of the country's least chainy places — by far. Bloomberg | Friendly Cities Lab

"Three states, one abortion in America."

A clinic that provides abortions in Oklahoma City has struggled to recruit local doctors because the procedure is culturally shunned. So Dr. Rebecca Taub, an obstetrician, travels once a month from her home in the East Bay to the clinic, where she performs dozens of abortions. On a recent weekend, most of her patients had arrived from Texas, having driven hours to avoid the state's new restrictions. S.F. Chronicle

One event involves getting a horse to slide on its back legs for as long a distance as possible.

Gif created from video by 9 Suertes.

In the Central Valley, female equestrians in stunning traditional costumes compete in a synchronized horseback ballet — all while riding sidesaddle. The events, known as charreadas, are popular in Mexico, but also thrive in diaspora communities. This dispatch from the tiny town of Snelling includes fantastic photos and video. 👉 National Geographic 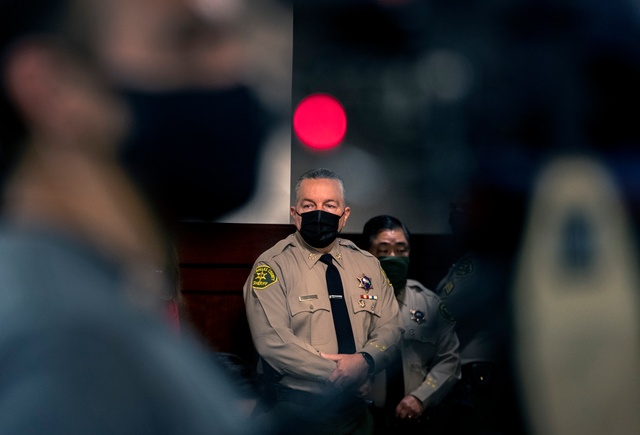 Sheriff Alex Villanueva has been accused of targeting political enemies.

The work of a unit formed by Los Angeles County Sheriff Alex Villanueva and other sheriff’s officials has been shrouded in mystery. But as its investigations have come to light, a thread has emerged, the L.A. Times wrote: "Their targets are outspoken critics of Villanueva or the department."

The U.S. 9th Circuit Court of Appeals on Thursday overturned a judge's decision that would have required Los Angeles to house the homeless population of Skid Row by October. The three-judge panel said Judge David Carter failed to follow basic legal requirements. Carter ruled that structural racism created the homelessness crisis. But, the panel noted, the plaintiffs never alleged racism, and most of those who sued had no standing to bring the case. L.A. Times | Courthouse News Service

According to the latest tally, Gov. Gavin Newsom is losing the recall election in Riverside County, with 50.4% in favor of his ouster. The result, if it holds, would be a shock in a county where registered Democrats outnumber Republicans by a wide margin. It would also make Riverside the largest county — and the only one in Southern California — to back the recall. L.A. Daily News | Desert Sun

The latest tally in Orange County, once a Republican stronghold, favored Newsom by a margin of more than 3 percentage points. O.C. Register 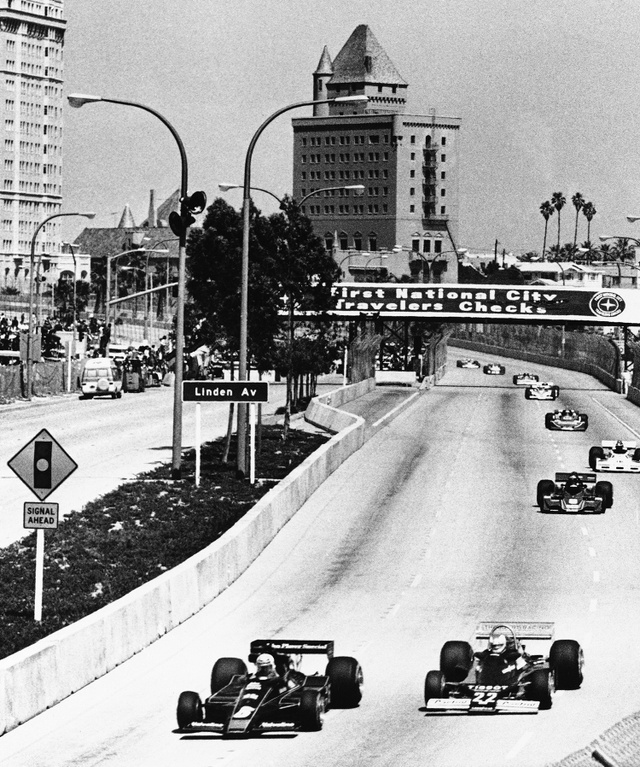 In the 1960s, much of downtown Long Beach was seedy, lined with Navy bars and pornography cinemas. A young British immigrant named Christopher Pook was operating a travel agency there when inspiration struck. What Long Beach needed, he declared, was a howling car race through the city streets, a celebration of beach, sun, and speed like that of Monte Carlo. City leaders told him he was crazy. Yet Pook — described as a "bulldog" of a salesman — won skeptics over with the promise that it would boost tourism. In 1975, an inaugural race drew 40,000 paying customers. “Guess what,” Pook told the L.A. Times years later. “People started knowing where Long Beach was.” The Grand Prix of Long Beach was born. Now the longest-running major street race held in North America, the 2021 event kicks off today after a pandemic hiatus last year. As many as 200,000 fans are expected. O.C. Register | NBC Los Angeles