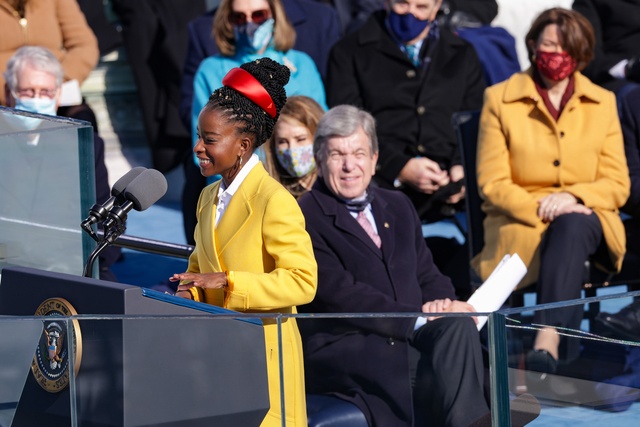 Amanda Gorman spoke at the inauguration of President Biden at the U.S. Capitol on Wednesday.

Amanda Gorman, a Los Angeles poet all of 22 years old, delivered one of the most stirring moments of Joe Biden's inauguration ceremony on Wednesday. Following in the footsteps of Maya Angelou and Robert Frost, she became the youngest person to write a recite a poem at a presidential swearing-in. It included these lines:

See Gorman deliver her poem "The Hill We Climb." 👉 @YouTube

Gorman grapples with a speech impediment. “But I don’t look at my disability as a weakness,” she said. “It’s made me the performer that I am and the storyteller that I strive to be." L.A. Times 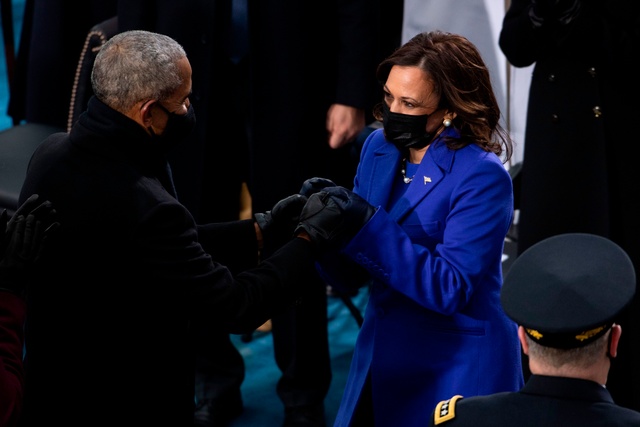 “It just shows her that anything is possible.”

The swearing-in of Kamala Harris as vice president, making her the first female vice president and the first Black American and first person of South Asian descent to hold the position, had a special resonance in the Bay Area, where Harris grew up. Mercury News | KQED

Fun fact: The second and third highest-ranking officials in U.S. government are now both women from the Bay Area.

Harris's first official act as vice president was swearing in her successor in the Senate, Alex Padilla, who became the first Latino to represent California in the upper chamber of Congress. "I’ve been telling folks I have big Chuck Taylors to fill,” he said, giving a nod to Harris’s favorite footwear. One of Padilla's first tasks: serving as a juror in the impeachment trial of Donald Trump. L.A. Times | S.F. Chronicle

CalMatters asked Padilla if he'd support the expulsion of Sens. Ted Cruz and Josh Hawley for objecting to the Electoral College votes. "I think the nation would be best served if they were no longer in the Senate," he said. "There are several procedures for that."

Rep. Kevin McCarthy, an ardent Trump ally who objected to Biden's election victory, struck a conciliatory tone on Wednesday, telling Biden and Harris that he was "very proud" of them. McCarthy skipped Trump's send-off. According to the N.Y. Times's Maggie Haberman, Trump has used colorful language to describe a newfound antipathy toward the Bakersfield Republican since he rebuked the president for stoking the Capitol mob. KFSN | USA Today 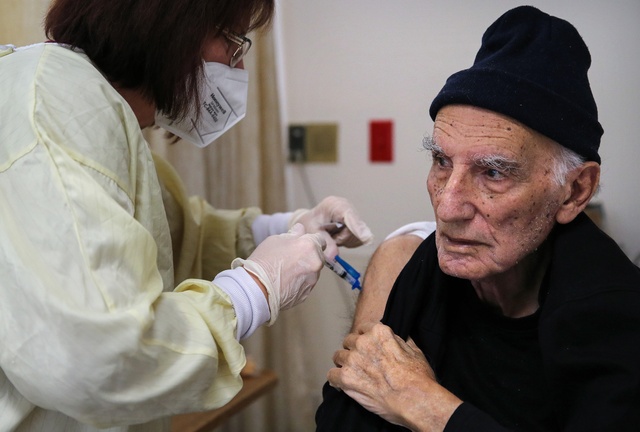 Abraham Hamamdjian got vaccinated at the Ararat Nursing Facility in Los Angeles on Jan. 8.

It could take until June to finish vaccinating Californians 65 and older, the state’s epidemiologist, Dr. Erica Pan, said Wednesday. That suggests a wait of at least four months for those who are not on the current priority list, which includes health care workers and people in nursing homes. There are 6.2 million Californians over the age of 65, but the state is only getting between 400,000 and 500,000 vaccine doses in a good week. L.A. Times | Sacramento Bee

When California announced an outdoor dining ban in early December, officials were asked to provide evidence of a link between the activity and coronavirus transmission. They didn't, instead arguing that the ban sends a message discouraging mixing. But some experts believe the ban has had the opposite effect, driving people toward riskier gatherings. "Things actually got worse," said Dr. Monica Gandhi, an infectious disease expert at UCSF. SFGate.com 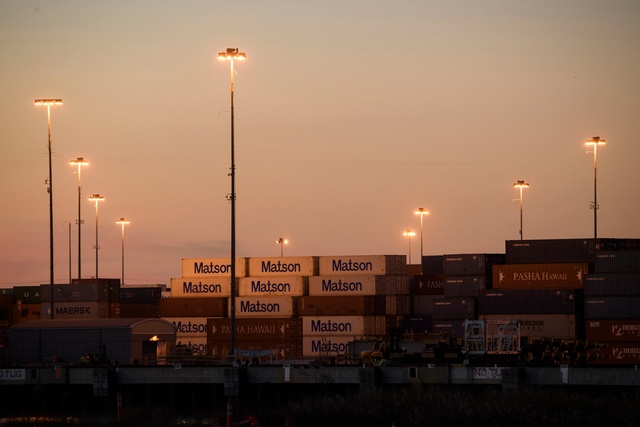 Officials have sounded alarms about a backup of containers at the ports of Los Angeles and Long Beach.

On Tuesday, 45 cargo ships were anchored outside the twin ports of Los Angeles and Long Beach, part of a major bottleneck that is being exacerbated by the coronavirus. Nearly 700 dockworkers at the ports have contracted Covid-19, and hundreds more have taken virus-related leaves. Members of Congress have pleaded with health officials to give dockworkers vaccine priority. “Without immediate action," Rep. Nanette Diaz Barragan wrote, "terminals at the largest port complex in America may face the very real danger of terminal shutdowns." L.A. Times

State Sen. Shannon Grove, of Bakersfield, was ousted as leader of the Republicans in the Legislature's upper house on Wednesday. An enthusiastic Trump supporter, Grove amplified misinformation about the presidential election and initially blamed the Capitol insurrection on antifa. Republicans chose state Sen. Scott Wilk, a moderate who sometimes votes with Democrats, to take her place. S.F. Chronicle | Politico 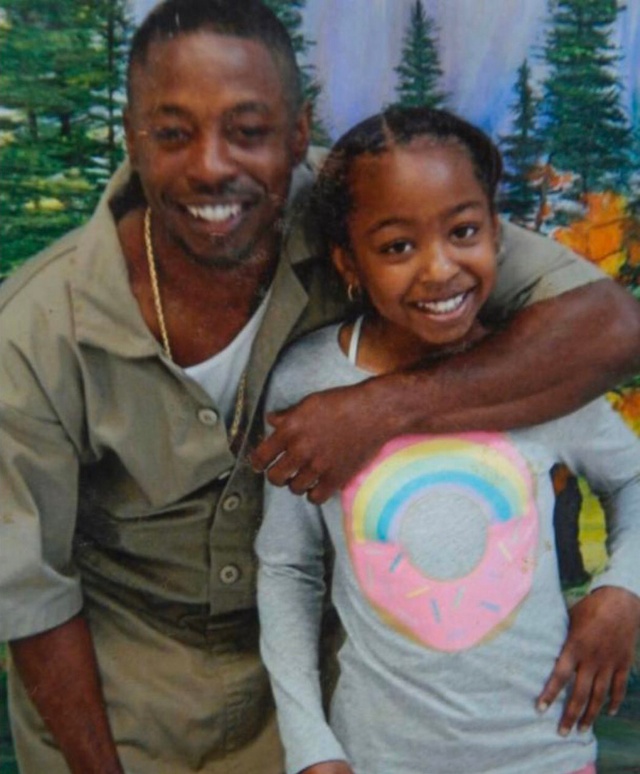 Corvain Cooper with his daughter, Cleer Cooper, at a federal prison in Merced County.

Donald Trump granted clemency to a Los Angeles man who was sentenced to life in prison without the possibility of parole for nonviolent marijuana crimes. In 2013, Corvain Cooper was convicted of trafficking large amounts of cannabis. Although he was low in the hierarchy of the operation, conspiracy charges allowed prosecutors to inflate his culpability. Cooper reacted from prison on Facebook: “I get to now be the dad I always wanted to be!” O.C. Register | NY Post

Forecasters expect as many as four storms to drop desperately needed rain and snow over California during final weeks of January. The first system, arriving midweek, was poised to dump heavy rain on parts of Southern California, followed by a succession of storms across the state beginning Friday. According to the U.S. Drought Monitor, 95% of California is now stricken by drought conditions. CNN | Weather Channel

Catalina Herrera, a dog groomer in Burbank, has become wildly popular on TikTok with short videos of bedraggled dogs being transformed by a haircut and a wash. In a recent video, Herrera treated a pup whose matted hair was among the worst she had ever seen. Knotted hair can be painful. After an hour of work, the dog was like new. "You're officially free," says Herrera. "You're free!" 👉 @catherrera 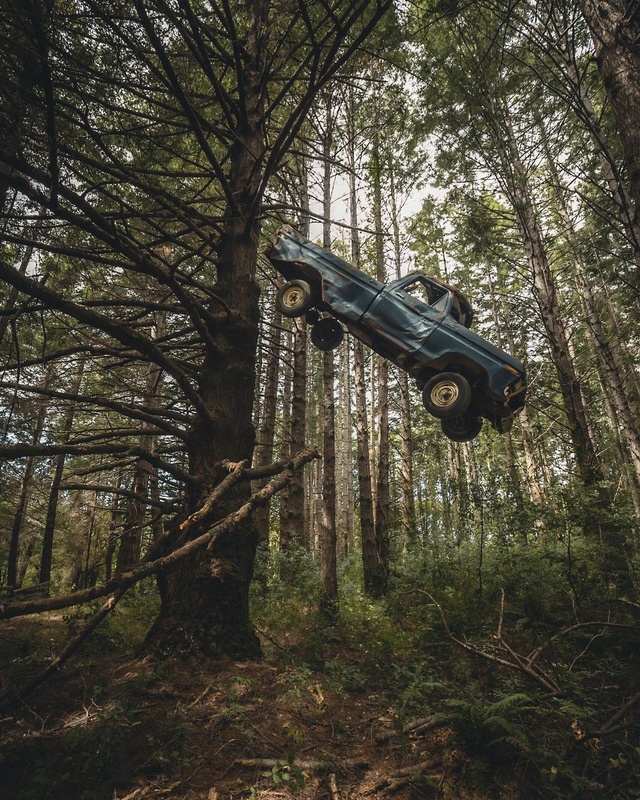 Pictured above, deep in the heart of the Lost Coast, is the aftermath of a GPS device gone haywire. Not really. Some years ago, a local doctor with a penchant for whimsy hoisted a Ford truck shell into the trees near the mouth of Mattole River just for the heck of it. Being the Lost Coast, with its live-and-let-live ethos, no government agent has thought to tell him to take it down. RudyRucker.com