A private school in North Hollywood that charges up to $32,020 in tuition was able to get Covid-19 vaccinations for its teachers even though county officials have told other educators they won't be eligible for at least another two weeks. In a note to parents, the Wesley School said its teachers were inoculated a week ago through "a special program." Los Angeles is facing an acute vaccine shortage, with just 20% of those 65 and older having gotten their shots. L.A. Times | CBSLA 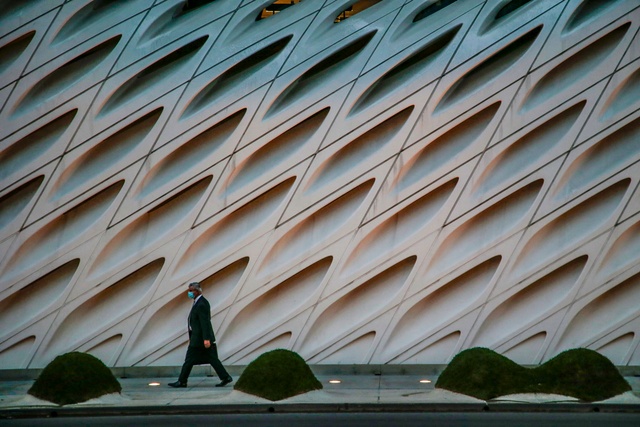 A masked pedestrian walked by the closed Broad Museum.

While many of the country's museums have reopened, those in Los Angeles remain an exception. Their prolonged closure is costing roughly $22 million a day in lost revenues, setting the arts scene back at a moment when some had pronounced Los Angeles the contemporary art world’s creative center. Museum directors have been especially frustrated watching places like indoor malls open. Art plays a vital role in society, said the Hammer Museum’s director, Ann Philbin: “Our museums function as real places of respite and healing and inspiration — they help people a lot.” N.Y. Times 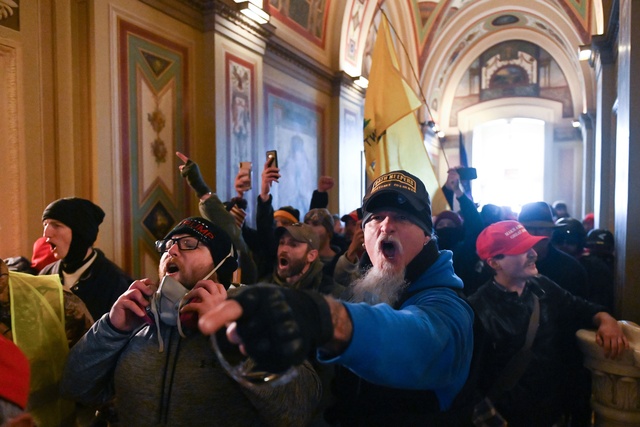 Trump supporters roamed inside the Capitol on Jan. 6.

Insurrectionists who stormed the U.S. Capitol on Jan. 6 searched feverishly for Speaker Nancy Pelosi, footage released on Wednesday showed. “Nancy,” one man cried out. “Oh Naaaaaaancy.” House impeachment manager Stacey Plaskett said the rioters had publicly declared their desire to harm or kill the San Francisco Democrat. Had they found her, Plaskett said, "they would have killed her.” S.F. Chronicle | Washington Post

Cannabis is legal in California, yet four out of five pot shops in Los Angeles are illicit. When the authorities come knocking, it's often low-level workers who get arrested for jobs they thought were legitimate, while the owners remain shielded behind shell companies. Here's a troubling account of how California's gray-market economy tends to hurt Black, brown, and poor Americans, reproducing the social inequalities that legalization was supposed to help fix. 👉 Politico magazine

More than $10 billion is sitting in an unclaimed property fund run by California — and some of it could be yours. State law requires that banks, insurers, and other entities turn over customers’ property after a period of account inactivity. It comes in the form of stock dividends, tax refunds, wages — even the contents of safe deposit boxes. L.A. Times | Sacramento Bee 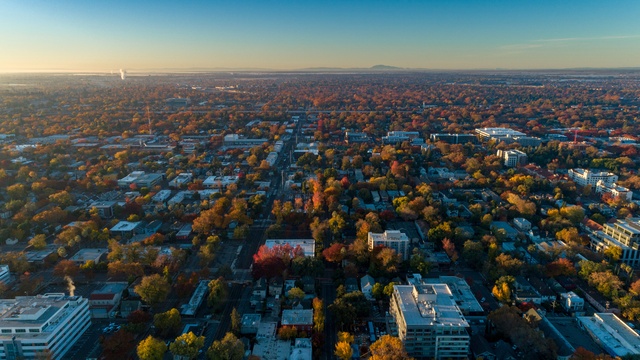 Sacramento is trying to address the housing crisis through zoning.

Sacramento is poised to become the first city in California — and one of the first in the country — to end zoning that permits only one single-family home on a property. Under the proposal, up to four homes could be built on lots. Backers of the change, including the mayor and a coalition of housing activists, say it's needed to ensure Sacramento avoids the skyrocketing housing costs that have left so many people behind in the Bay Area. L.A. Times

In September, a server at the prestigious Sonoma restaurant The Girl & The Fig quit rather than remove her Black Lives Matter mask after being informed of a new rule that staff must wear company branded masks. This week, her story was reported by SFGate, triggering a backlash. Targeted by threats, The Girl & The Fig, which said it supports Black Lives Matter, has now closed for the foreseeable future. S.F. Chronicle

☝️ With Valentine’s Day around the corner, here’s a fun view of one of San Francisco’s most romantic landmarks.

The Palace of Fine Arts, built to display artworks during a world's fair in 1915, was meant to be temporary. But San Francisco decided it was simply too beautiful to destroy. Rebuilt in the 1960s, the templelike structure and surrounding lagoon became one of the city's most attractive venues, for galas, performances, and picture-perfect marriage proposals. 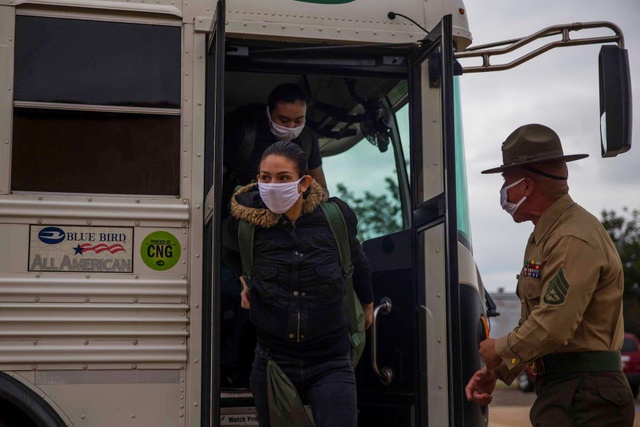 A new recruit with Lima Company stepped off the bus at Marine Corps Recruit Depot on Tuesday.

This week, a group of women began Marine boot camp training for the first time on the West Coast. About 60 women are forming one of six platoons at Marine Corps Recruit Depot San Diego, ending the all-male training that has existed there for nearly 100 years. “I have no words for it," said Teia Chutaro, 18. "I’m just proud to be here and I can be a part of making history.” CBS8 | S.D. Union-Tribune 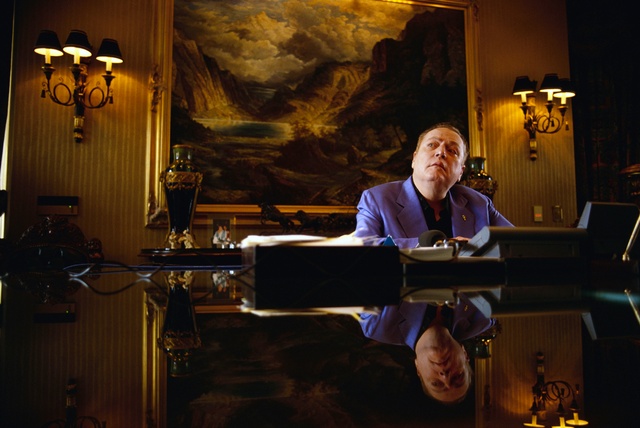 Larry Flynt at his Beverly Hills office in 1998.

Larry Flynt died of heart failure on Wednesday at his Hollywood Hills home. The ninth-grade dropout who built a $400 million empire of raunchy publications and other vices was, in the words of one writer, "an unpopular hero to civil libertarians, the Devil incarnate to an unlikely alliance of feminists and morality preachers, and a purveyor of guilty secrets to legions of men." He was also a candidate for California governor: in 2003, he ran to replace Gray Davis. Asked what made him qualified, Flynt said if Bill Clinton could hold office, so could he. Flynt was 78. N.Y. Times | L.A. Times 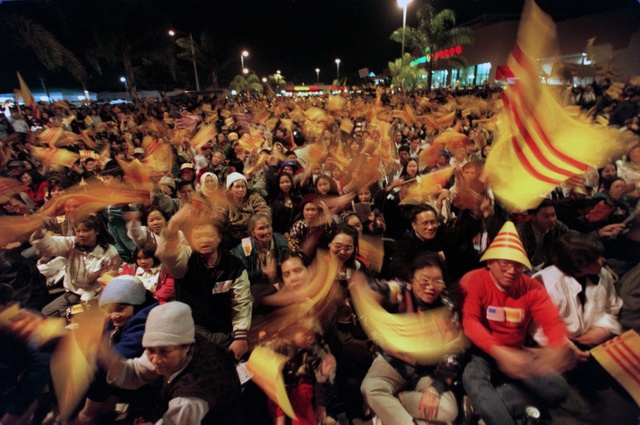 At the end of the Vietnam War in 1975, nearly 20,000 refugees were brought to Southern California’s Camp Pendleton. Many resettled a little ways up the coast in northern Orange County, forming what would become the largest Vietnamese enclave in the United States.

Little Saigon, straddling Westminster and Garden Grove, was a place of hope and reinvention. But memories of the war remained vivid. So in early 1999, when a local merchant dared his fellow immigrants to remove a poster of the Communist leader Ho Chi Minh in his video store, the reaction was passionate.

He was trying to spark a debate, Truong Van Tran explained. “I have a right to hang whatever picture I like in my store,” he told a reporter at the time. “I know the law in this country.” 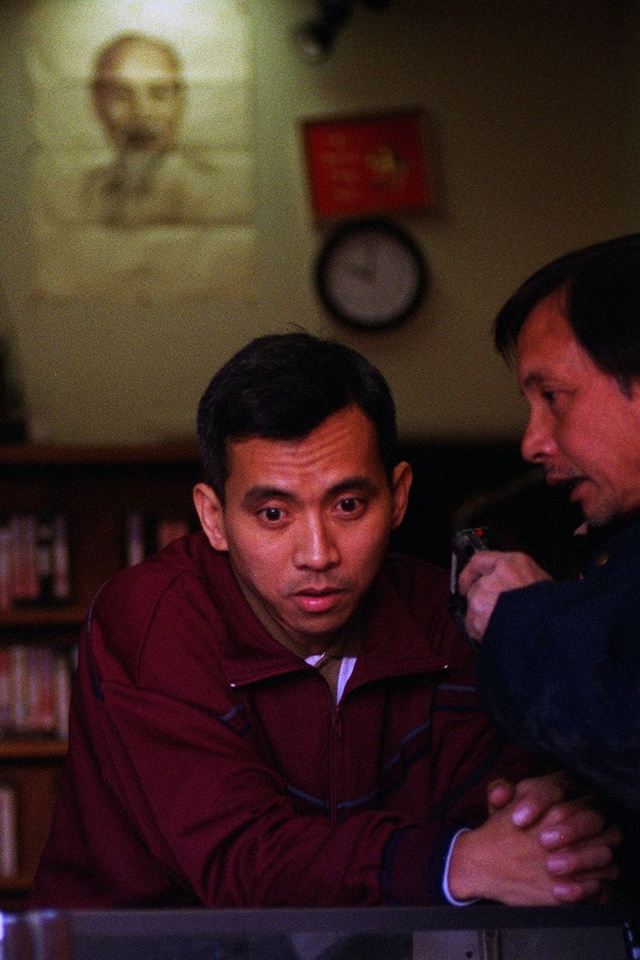 Truong Van Tran at his video store in 1999, with a poster of Ho Chi Minh on the wall.

What followed was the largest unrest Little Saigon had ever seen. For 53 days, protesters raged in the streets, chanting about the scars left by the war.

"Who killed my father?" a protester screamed.

"Who killed my brother?"

Some activists threatened to set themselves on fire, emulating the suicidal Buddhist monks of the 1960s. Dozens were arrested.

For a time, the poster was removed as a judge evaluated an argument from Tran’s landlord that it had created a public nuisance. When the court affirmed Tran’s First Amendment rights, he returned to his shop to rehang the poster on this week in 1999. An angry crowd was waiting. One protester slapped Tran with a hand smeared with spit, a N.Y. Times report said. As Tran fell to the ground, someone draped a yellow, red-striped flag of South Vietnam over him. 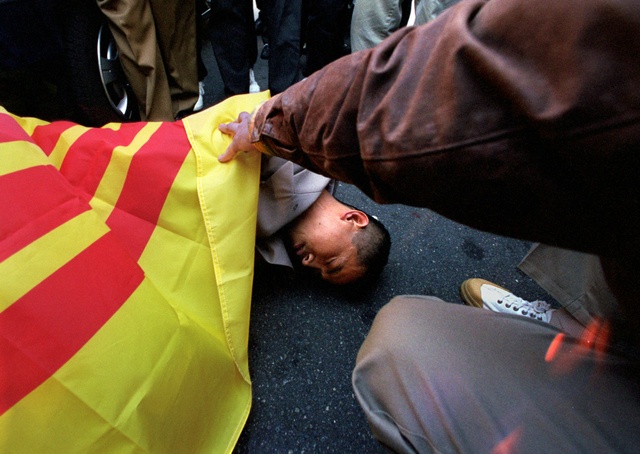 The protests ended only after Tran was evicted from his store a few weeks later over unpaid rent. With that, the activists declared victory.

But Tran’s troubles weren’t over. Officers who entered his store during the protests noticed an odd setup of video recorders. Tran was a peddler of counterfeit tapes. In August of 1999, he was sentenced to three months in jail for piracy. He fell from the headlines and in 2005 returned to Vietnam, where he got into the aquaculture business.

In a special report in 2015, the Orange County Register recounted how the Tran protests had led to a political awakening in Little Saigon. Where the community had stayed mostly on the political sidelines for a quarter century, after 1999 it helped elect more than a dozen Vietnamese Americans to political office. Among them was Janet Nguyen, the nation’s first Vietnamese American woman to serve in a state legislature. 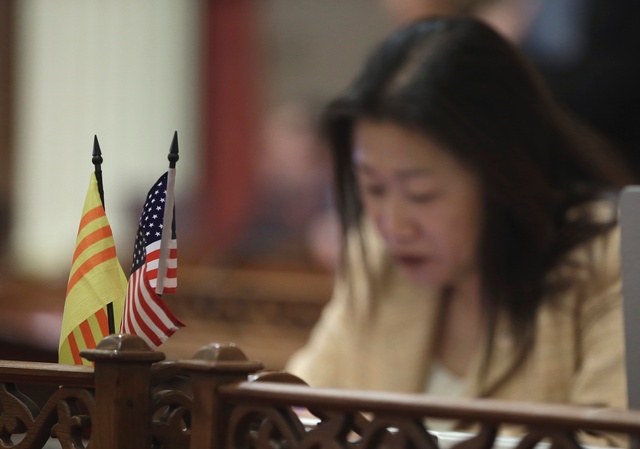 A flag of South Vietnam and an American flag were displayed on state Sen. Janet Nguyen's desk in Sacramento in 2017.

Nguyen, who had been a 5-year-old boat refugee, made national headlines in 2017. Two days after the late state Sen. Tom Hayden was memorialized in the California Senate, she rose to denounce his anti-Vietnam War activism, delivering her remarks in Vietnamese. Ruled out of order, Nguyen refused demands by the presiding officer to sit down and was physically removed from the chamber by a pair of sergeants-at-arms.