A federal appeals court ruled that the Trump administration cannot block California's net neutrality regulations, among the most robust in the country. The law barring internet providers from throttling web traffic was passed last year but has been on hold pending legal challenges. A Stanford law professor called the ruling "a historic win for California." Politico | S.F. Chronicle

California said it would appeal a federal judge's order blocking a law that would have required President Trump to release his tax returns to appear on primary ballots. "States have a legal and moral duty to restore public confidence in government," a spokesman for the governor said. U.S. District Judge Morrison England Jr. said California may have been well-intended but that its law likely violates the Constitution. A.P. | L.A. Times 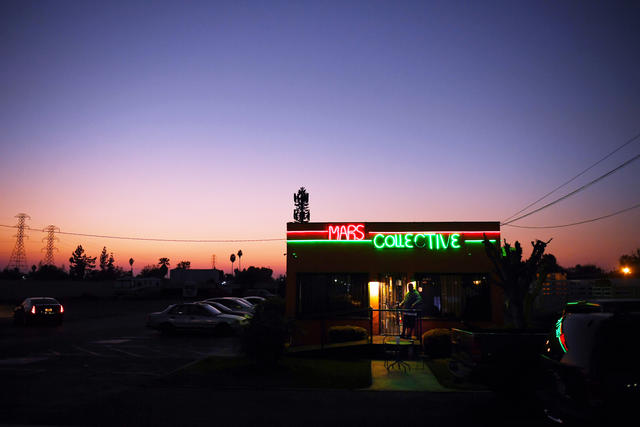 A medical marijuana dispensary in Bakersfield. The region is one of California's marijuana deserts.

"There hasn't been any real buyer's remorse about the initiative. If anything, support has gone up."

Nearly two-thirds of California voters want marijuana stores in their communities, according to a new poll, yet the vast majority of cities have outlawed them. Many local officials have said they are worried about crime. L.A. Times | U.S. News & World Report

An audit found that California's black market is at least three times the size of its regulated industry. NBC News | L.A. Times 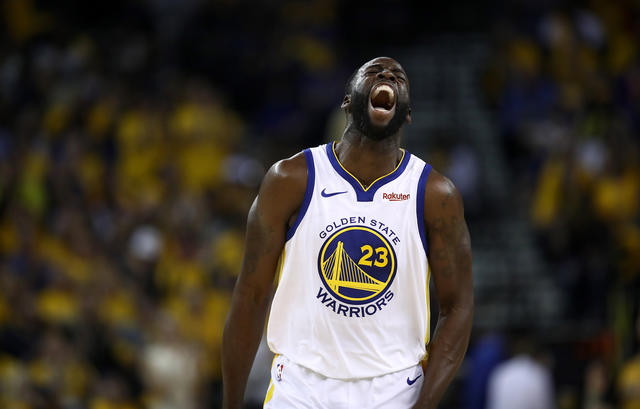 Draymond Green has been an advocate of the new California law.

Two of the Bay Area's most outspoken professional athletes lashed out at the NCAA over its resistance to a new California law that lets college athletes earn money from endorsements. 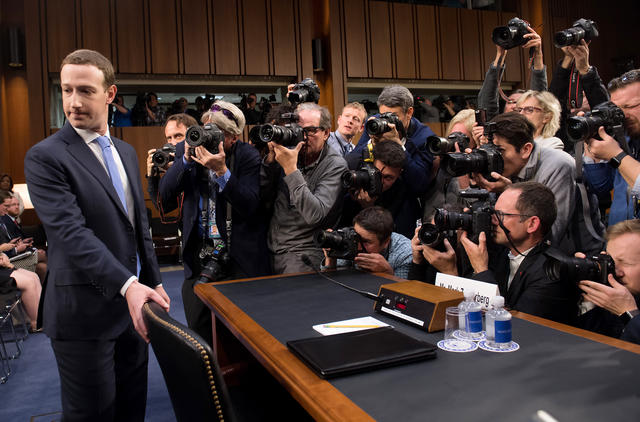 The Verge obtained two hours of audio from open meetings between Mark Zuckerberg and employees at Facebook, during which he sought to rally the company against competitors and the U.S. government.

On Sen. Elizabeth Warren's call to break up the company, Zuckerberg promised a legal fight: "If she gets elected president, then I would bet that we will have a legal challenge, and I would bet that we will win the legal challenge. And does that still suck for us? Yeah." He added: "But look, at the end of the day, if someone's going to try to threaten something that existential, you go to the mat and you fight." The Verge | N.Y. Times

Warren responded on Twitter: "What would really 'suck' is if we don't fix a corrupt system that lets giant companies like Facebook engage in illegal anticompetitive practices, stomp on consumer privacy rights, and repeatedly fumble their responsibility to protect our democracy."

Rep. Devin Nunes, a Central Valley Republican, filed his fifth lawsuit of the year, this time suing a former Esquire reporter and Hearst Magazines over a story on how the congressman's family had moved its dairy operation to Iowa and relied on unauthorized immigrants. The complaint claims the story harmed Nunes's reputation and accuses the reporter of behaving "like a sex offender or pedophile." It seeks $75 million in damages. McClatchy | Courthouse News Service 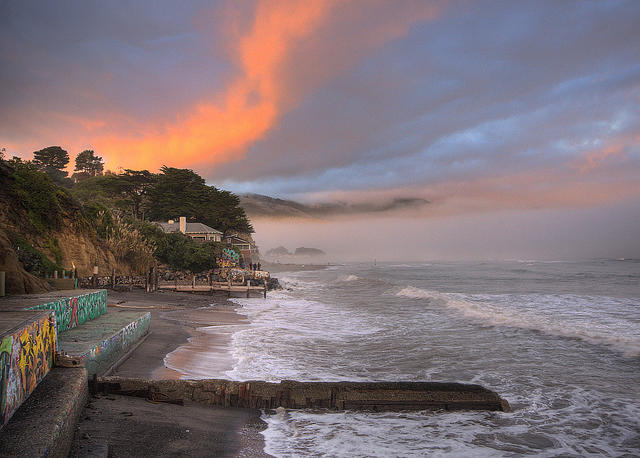 Bolinas, the quirky beach community in Marin County, has tried to stay hidden, famously tearing down road signs along Highway 1 to keep tourists away. Now Bay Area wealth and Airbnb are threatening the town's character. Since 2010, Bolinas's permanent population has dropped by nearly a quarter. "The internet has just torn through" the town, one local said. Curbed San Francisco 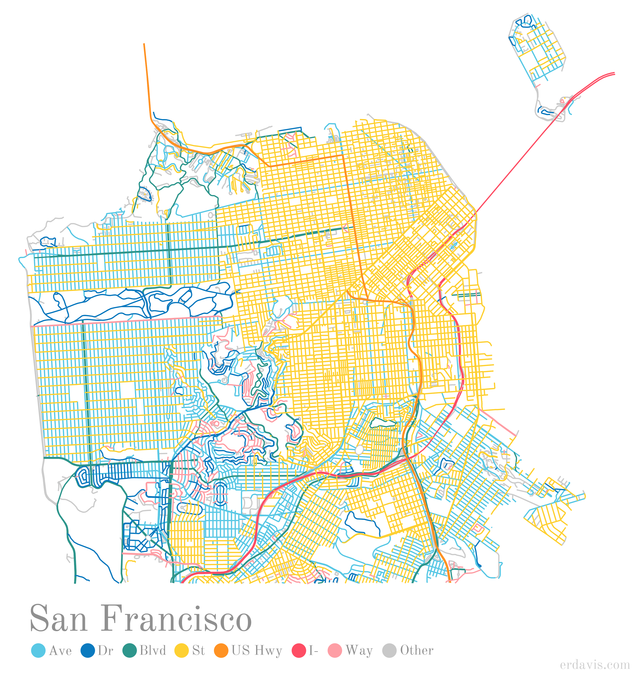 Erin Davis, an artist and cartographer, thought it would be interesting to color-code city streets according to suffix. Her San Francisco map, above, reveals an elegant logic. "Driving around your city, you're probably somewhat aware of Avenues and Boulevards and Streets and Roads and so on," she wrote. "By coloring them, we can suddenly see a new, stunning view of what we normally take for granted." erdavis.com

She did Los Angeles too. 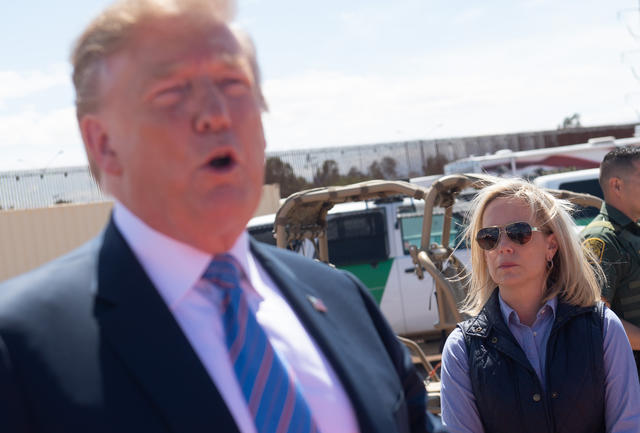 President Trump with Kirstjen Nielsen, then the homeland security secretary, in Calexico on April 5.

"You are making me look like an idiot! I ran on this. It's my issue."

The N.Y. Times offered a disturbing glimpse into President Trump's private deliberations on stemming illegal immigration at the southern border. He suggested a water-filled trench, stocked with snakes or alligators. He wanted the wall electrified, with spikes on top. He suggested that soldiers shoot migrants in the legs to slow them down. That's illegal, he was told. N.Y Times

What once was a Pearl Harbor survivors' group with 586 men has dwindled to just seven. The San Diego group held its final meeting a couple weeks ago, unable to continue for lack of enough board members. "It's certainly the end of an era," said chapter President Stuart Hedley, who is turning 98, "and it leaves me a little heartbroken." S.D. Union-Tribune

Emily Zamourka, the homeless subway singer who became an overnight internet sensation, is receiving a flood of attention — and money. A GoFundMe campaign has raised more than $46,000 as of early Wednesday. A City Council aide reached out to offer Zamourka a singing job at the opening of Little Italy, a section of San Pedro. "She was very excited, but I think we were more excited," he said. "We're going to treat her like a star." L.A. Times 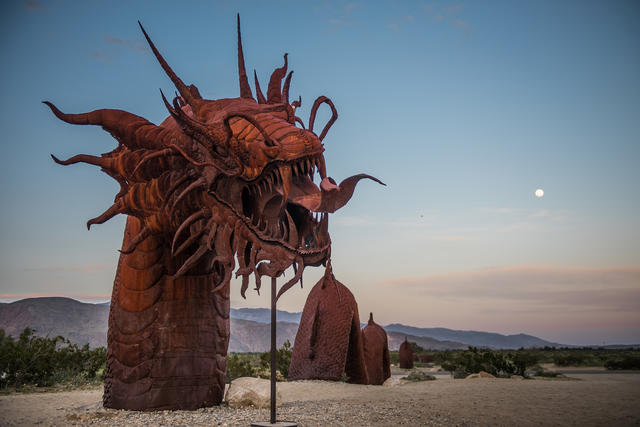 Galleta Meadows Estates in Borrego Springs is filled with massive and mythical sculptures.

Dennis Avery, the heir to a label-making fortune, liked to find good causes for his money. One of them was whimsy. So after buying 3,000 acres of the California desert to prevent it from being developed, he scattered the property with more than 130 giant metal sculptures of dinosaurs, mammoths, dragons, and other creatures, then opened it to the public. The wild metal kingdom in Borrego Springs, enhanced by some of the starriest skies in the West, is among Southern California's most unique and wondrous places. Atlas Obscura | California Through My Lens

When Avery died in 2012 at the age of 71, he was remembered as a man of unusual kindness. "Some people are bigger than life," the mayor of Borrego Springs said. "He was that man." S.D. Union-Tribune 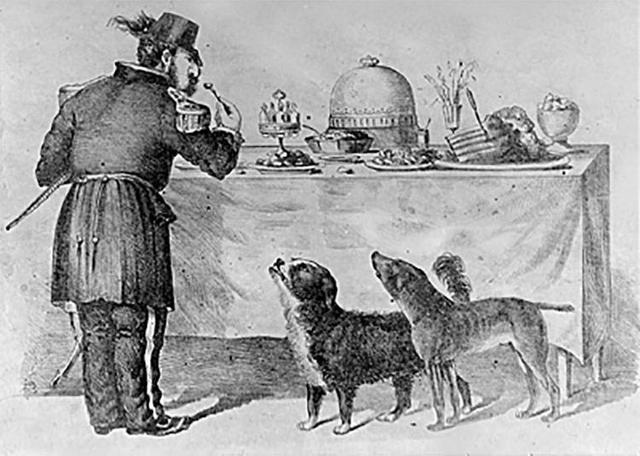 A cartoon depicted Bummer and Lazarus begging from Emperor Norton I.

Two of the most beloved characters to ever roam San Francisco were street dogs. In 1860s San Francisco, stray dogs were treated as pests to be handled lethally by dog catchers — except for Bummer and Lazarus.

According to newspaper accounts, the dogs' favored status began when Bummer, so named for his pleadings for food, rescued a scrawny dog from a fight with a larger opponent. Bummer then brought the injured animal food and huddled with him for warmth in doorways.

From then on, Bummer and his companion, dubbed Lazarus for his return from the dead, became inseparable. San Franciscans were touched by the friendship and grateful for the dogs' rat-killing exploits, which were recounted by an amused press corps.

When a new dog catcher captured Lazarus, angry residents demanded his release. City supervisors responded by declaring the dogs free to roam as they pleased. In one certainly embroidered tale, theater seats were reserved for the two dogs along with Emperor Norton I, the oddball character who claimed to rule the United States. 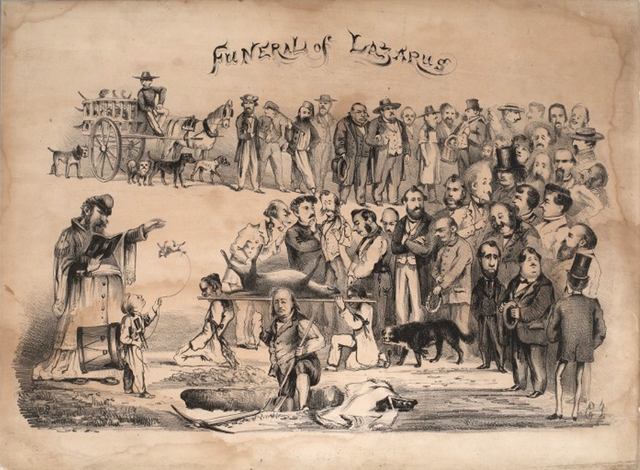 A depiction of Lazarus's funeral, presided over by Emperor Norton I, circa 1860s.

Lazarus died in October of 1863 under murky circumstances, perhaps by poisoning or by the kick of a horse after biting a boy. A cartoonist portrayed the funeral with notable San Franciscans in attendance and Emperor Norton I, arrayed in episcopal finery, presiding.

Bummer died a couple years later after being kicked down a staircase by a drunk. The offender was arrested for his own safety and was reported to be punched in the face by his outraged cellmate.

Tributes filled the pages of the city's papers, including a wry eulogy by Mark Twain. Bummer, he wrote, was "full of years, and honor, and disease, and fleas."

For decades, the taxidermied bodies of Bummer and Lazarus were displayed at Martin's Saloon, their old haunt, then eventually destroyed. Nearly a century later, a plaque was installed in their honor in a redwood grove at the base of the Transamerica Pyramid. "They belonged to no one person," it read. "They belonged to San Francisco." FoundSF | SFGate.com