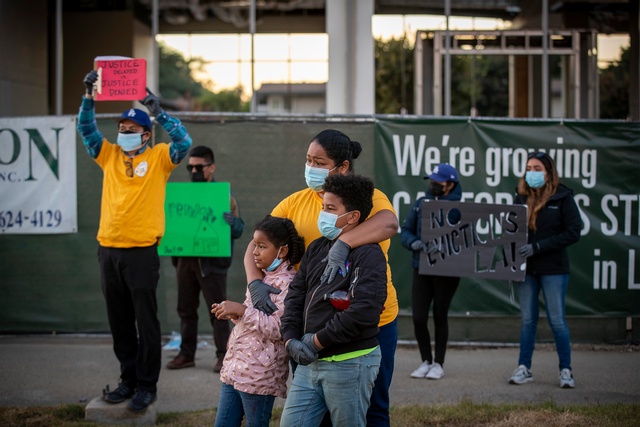 A tenant group rallied for rent protections in Lakewood in December.

California has a $1.4 billion fund to help tenants pay rent during the pandemic. But the submitted applications have accounted for less than one-third of the total. Of those, just a quarter have been approved. Tenant advocates blame red tape and confusion about the program. With eviction protections set to expire in June, some fear a wave of people will be needlessly forced from their homes. L.A. Times

In 2019, a Hanford woman named Chelsea Becker was charged with murder after she gave birth to a stillborn boy with meth in his system. On Thursday, a judge dismissed the case, saying prosecutors failed to show that Becker took the drugs knowing they could kill her baby. The dismissal, however, fell short of what Becker's advocates wanted: a clear ruling that California’s homicide law does not apply to pregnant women. L.A. Times | A.P.

What started as an offhand request for women's stories of sexism at craft breweries resulted in a #MeToo wave across the industry. Allegations of inappropriate touching, sexist comments, and other misconduct have rocked several California beer businesses. The CEO of San Diego's Modern Times stepped down. Oakland’s Original Pattern Brewing fired an assistant brewer. A bar chain said it cut ties with a contractor. S.F. Chronicle | Mercury News 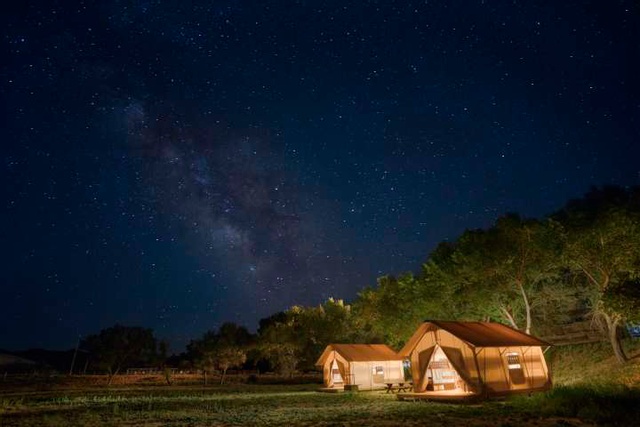 Hipcamp, the campsite booking platform, works with mostly private landowners who offer accommodations such as canvas tents, yurts, and tree houses. Outside magazine researched the best single rental near every national park, including all nine in California. Among them is a working ranch outside Pinnacles National Park, pictured above, where you can shoot skeet, walk a pig, and barbecue over an oak grill.

“It is simply wondrous."

A ranger in the Sierra foothills east of Stockton stumbled upon one of the most significant fossil discoveries in California history, researchers announced this week. Greg Francek first found a petrified tree, then a whole petrified forest. Paleontologists alerted to the site then dug up the bones of mastodons, ancestral elephants with four tusks, and 400-pound salmon with spiked teeth. They are thought to date back as far as 10 million years. SFGate.com | CBS SF 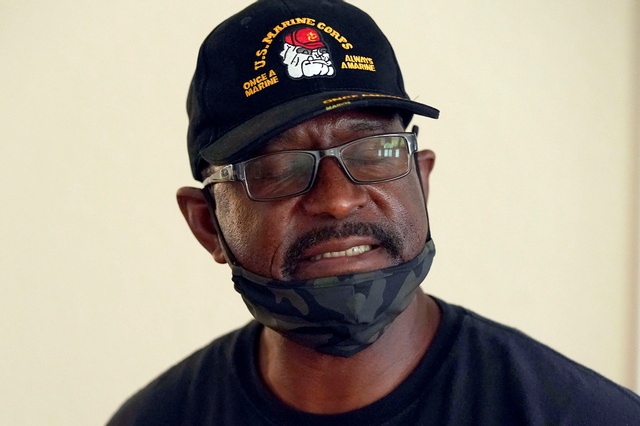 It took more than two years for prosecutors to charge a Bay Area officer in the fatal shooting of a suspect. By then, he had shot another suspect dead. The Associated Press published a deeply reported story on the case of the Danville officer, Andrew Hall, who on March 11 approached a homeless man named Tyrell Wilson and told him, "Come here for real quick.” Within 32 seconds, Hall shot him in the face. Wilson held a knife, but never lunged.

One of the Bay Area's largest hospitals reached a remarkable milestone: Zero coronavirus patients. San Francisco General Hospital hit a peak of 67 patients on Jan. 19. Since then hospitalizations have plummeted across the city, with just 13 as of May 16. About 76% of San Franciscans 16 and older have received at least one vaccine dose. S.F. Chronicle | KGO

In Los Angeles, just 39% of Latino men have gotten at least one vaccination shot, compared with 59% of white men, as of May 9. Surveys have shown that many Latino men want to get vaccinated, but have been hampered by busy lives, fear of side effects, and lack of familiarity with the health care system. Aura Ortiz, a medical assistant at a vaccine clinic in Los Angeles, cited another factor: “They hear all these crazy rumors that aren’t true” — including that vaccines cause infertility. L.A. Times 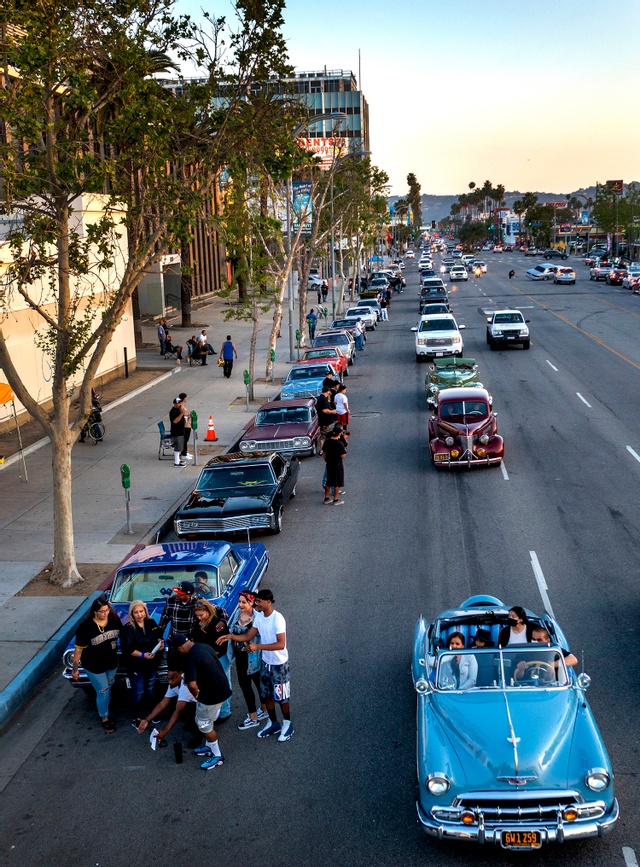 Cruising along Van Nuys Blvd. in the San Fernando Valley on April 17.

The tradition of driving leisurely down Van Nuys Boulevard in vintage lowriders never really died. But cruising is now reaching heights across Southern California not seen since the heydays of the 1980s and ’90s, aficionados say. The L.A. Times captured the resurgence with a fantastic collection of photos. 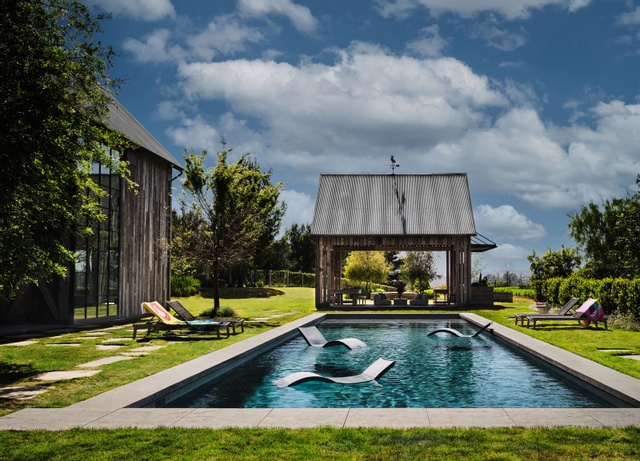 The pool at the home of Ashton Kutcher and Mila Kunis.

Ashton Kutcher and Mila Kunis gave Architectural Digest a tour of their Los Angeles home. The piece at times delivers some eye-rolling lines, like when describing the couple's approach to the 6-acre property — with an entertainment barn, barbecue pavilion, swimming pool, and 10-foot-long crystal chandelier — as "modest." Kutcher explained: “We wanted the house to look like an old barn," but also, he added, "modern and relevant.”

On this week's California Sun Podcast, host Jeff Schechtman talks with Denise Hamilton, the editor of the new fantasy anthology "Speculative Los Angeles." She talked about how Los Angeles in some ways teeters on a precipice, held on life support with water sucked from the Eastern Sierra. "You take that water away, blow up the California aqueduct, and within three weeks people are going to be killing each other for water." 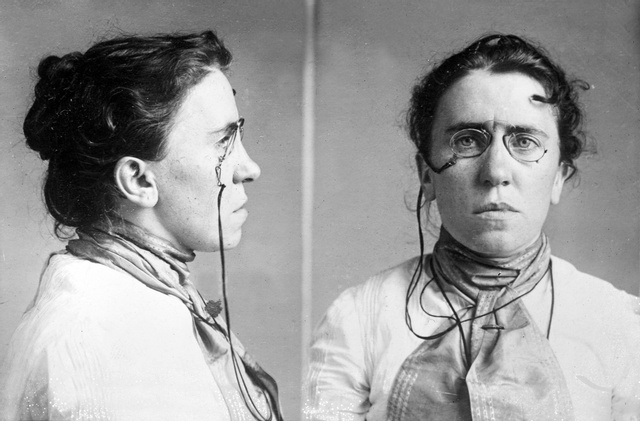 Mugshot photos of Emma Goldman, circa 1901.

It was on this week in 1908 that a mere handshake landed a man in Alcatraz. William Buwalda's trouble began when he attended a lecture on patriotism in San Francisco by the anarchist Emma Goldman.

After her remarks, Buwalda, an Army private in uniform, walked to the stage and shook Goldman's hand. The gesture, according to witnesses, electrified the gathering.

It also caught the attention of two plainclothes police officers at the event. Buwalda was hauled before a military court, where the soldier of 15 years insisted he was no anarchist and found Goldman's views to be "nonsense."

He shouldn't have gone to the speech, Buwalda acknowledged under questioning. He added, "I am, however, easy in my conscience." Even so, the court sentenced him to prison at Alcatraz, where he served eight months.

If the military hoped to set Buwalda straight, it failed. A few months after his release, he stuffed a medal he'd earned in the Philippines into an envelope and sent it to the secretary of war.

After thinking it over, he wrote, he had no use for such "baubles." He added: "It speaks of raids and burnings, of many prisoners taken and, like vile beasts, thrown in the foulest of prisons. And for what? For fighting for their homes and loved ones."

Buwalda returned to a farmer's life in rural Michigan, but his political radicalization deepened. He attended anarchist meetings and called for the abolition of the state in a letter to his local newspaper. "It is safe to say that governments have committed far more crimes than they have prevented," he wrote in 1912.

A friendship blossomed between Buwalda and Goldman, who would pay him a visit whenever passing through Michigan. Goldman later described being deeply moved by Buwalda's transformation.

In a letter to a friend, the woman who became known as among the most influential radicals of the early 20th century wrote, “I am prouder of having made Buwalda think, than of anything I have accomplished through all my public work.”

Buwalda died at the age of 76 at a veterans facility in Grand Rapids. His gravestone noted his military service.