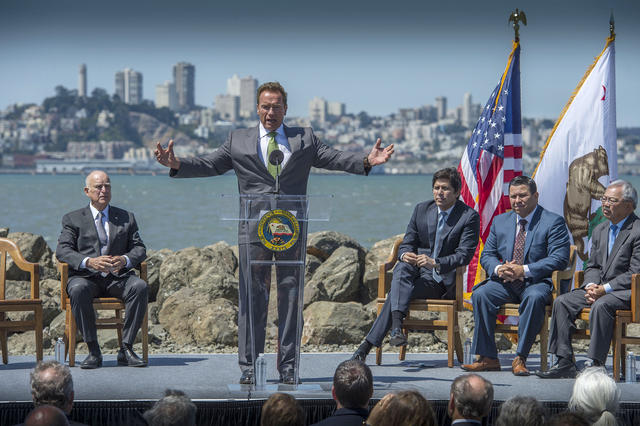 Gov. Jerry Brown, former Gov. Arnold Schwarzenegger, and others celebrated the extension of the cap-and-trade program in 2017.

Countries have called California's cap-and-trade program the answer to climate change. But it's just as vulnerable to lobbying as any other legislation. Journalists conducted a sweeping review of the state's cap-and-trade system and found that carbon emissions from the oil and gas industry actually rose 3.5 percent since it started. ProPublica

California said it would no longer buy vehicles from carmakers that don't recognize the state's clean car rules. The move amounts to a rebuke against automakers that sided with the Trump administration in the battle over California's authority to set its own pollution standards. It's expected to cost General Motors tens of millions of dollars. CALmatters | Sacramento Bee 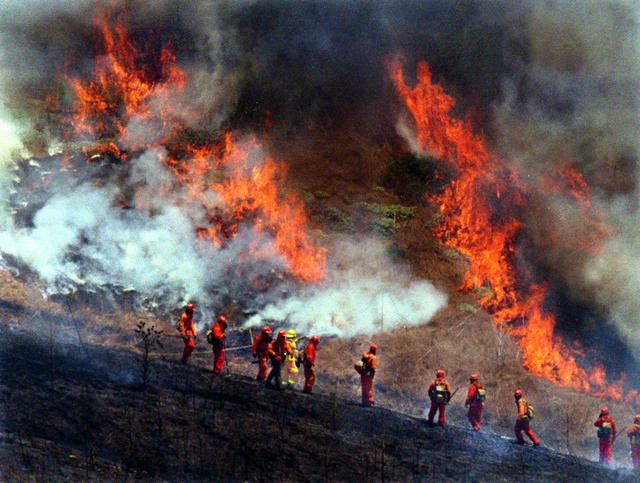 Firefighters performed a controlled burn in Crystal Cove State Park in 1998. California hasn't been nearly as aggressive as Florida in burning its overgrown wildlands.

"There's no place in Florida where fire is not an accepted practice."

Many fire experts want California to start emulating Florida, which has been setting small fires for decades as a way to use up fuels and prevent monster fires from erupting later. In 2017, the state burned more than 2 million acres. The amount burned that year in much larger California? Less than 50,000 acres. Sierra Magazine

State law enforcement experts have assumed that police departments always do internal investigations when officers kill someone. Not so in California. A review found that 10 percent of agencies failed to investigate fatal incidents between 2014 and 2018. KQED 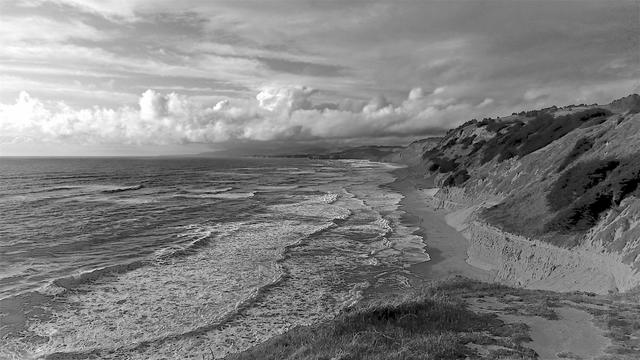 California is shaped by its endless watery backyard.

"How inappropriate to call this planet Earth when it is clearly Ocean."
— Arthur C. Clarke

A few fun facts about the vastness of the Pacific Ocean: 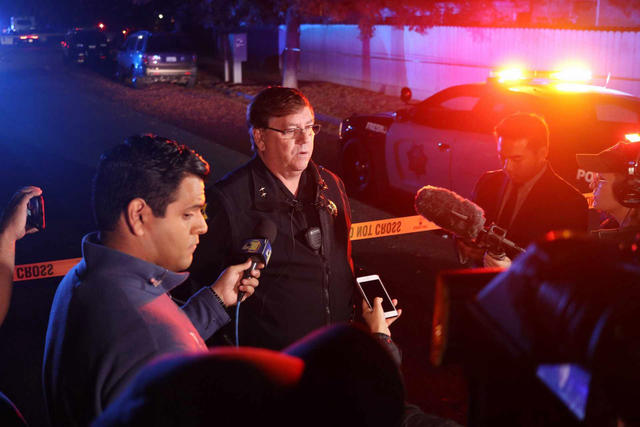 Fresno police Lt. Bill Dooley spoke to reporters near the site of the shooting in Fresno on Sunday.

Four men were killed and another six were injured after a gunman sneaked into a backyard party in Fresno and opened fire on people watching Sunday night football. The police were investigating a motive and said no arrests had been made. It was the third mass shooting in California in less than a week. Fresno Bee | A.P.

Google has said for years that its search algorithms are objective, unsullied by human biases. A yearlong investigation by the Wall Street Journal found that to be untrue. The Mountain View company has made algorithm changes to favor big businesses over small ones, made tweaks on behalf of eBay, and boosted websites like Amazon and Facebook. Wall Street Journal | CNBC 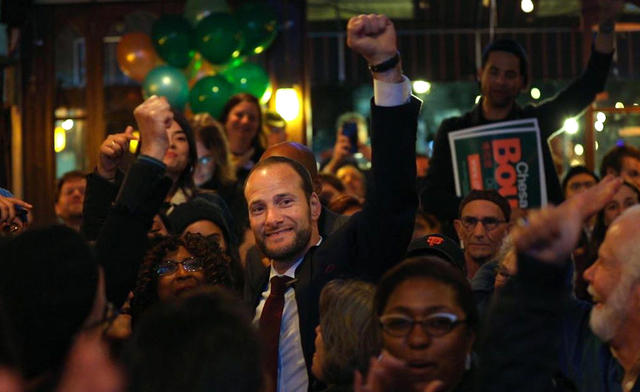 San Francisco's district attorney-elect Chesa Boudin said he plans to ease back on the prosecution of "quality-of-life crimes." That means no cases involving consenting sex workers, street camping, panhandling, or public urination. "We have a long way to go to decriminalize poverty and homelessness," he said. SFist | The Guardian 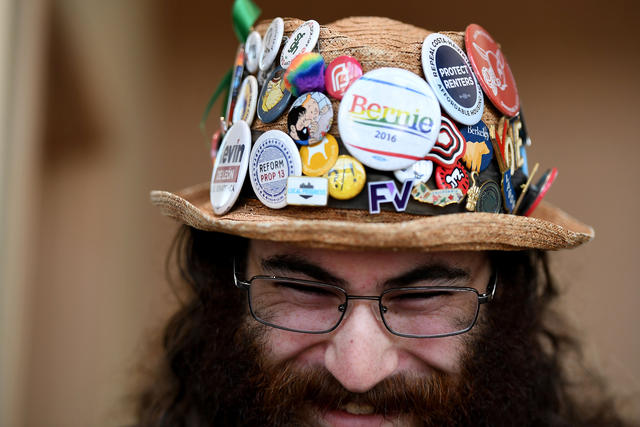 Soli Alpert was ready for the California Democratic Party Convention in Long Beach on Friday.

Eight Democratic presidential hopefuls gathered in Long Beach over the weekend for the state's Democratic convention. There were vows to ban assault weapons, allow 16-year-olds to vote, and solve homelessness by 2028. Los Angeles Mayor Eric Garcetti said it was nice to be getting more attention from the candidates. But, he added, "We'll never be Iowa." L.A. Times | Long Beach Post

The United Farm Workers named its choice: Sen. Kamala Harris. The endorsement came as some California Democrats questioned whether it was time for her to drop out. Politico 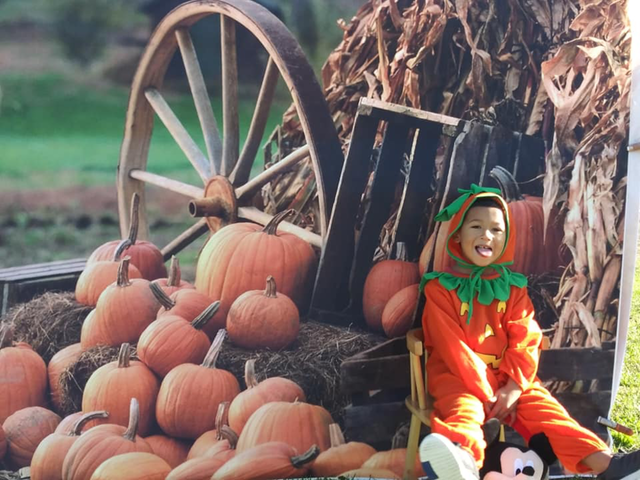 Enzie Valdivia, 3, was among those killed.

A domestic dispute in San Diego ended with five people dead from the same family, including three boys under the age of 12. Another boy, aged 9, was in critical condition. The couple at center of the family was estranged. The woman had a restraining order against the man. S.D. Union-Tribune | NBC San Diego

Here are photos of the family.

A Santa Ana surf instructor and his wife began hosting dinners for homeless people five years ago. Guests are treated to fine dining and conversation as a way of bringing them dignity, hope, and connection. "This is not a feed," the organizer said. "Feeding the homeless, that's not new. What's new is sitting together and being together as a family." L.A. Times 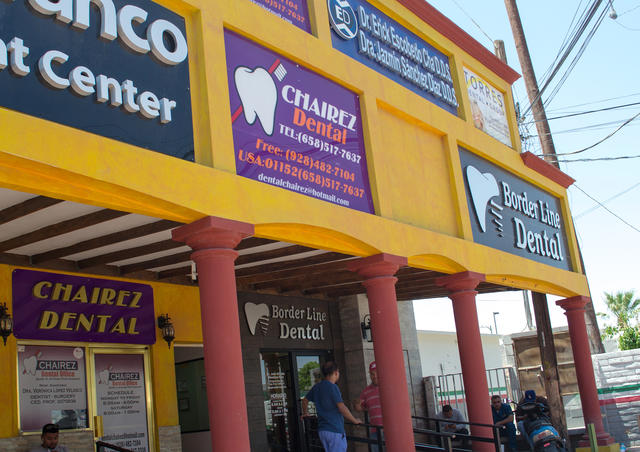 Dental services are easy to find in Los Algodones, Mexico.

Billboards lining a stretch of Interstate 8 east of San Diego beckon Americans to head south to Los Algodones, Mexico. But instead of resorts, they promote dental clinics. In a tiny city of just 5,000 permanent residents, an estimated 600 dentists offer bridges and root canals for half the typical American rate. It's become such big business that visitors have taken to calling it "Molar City." HuffPost 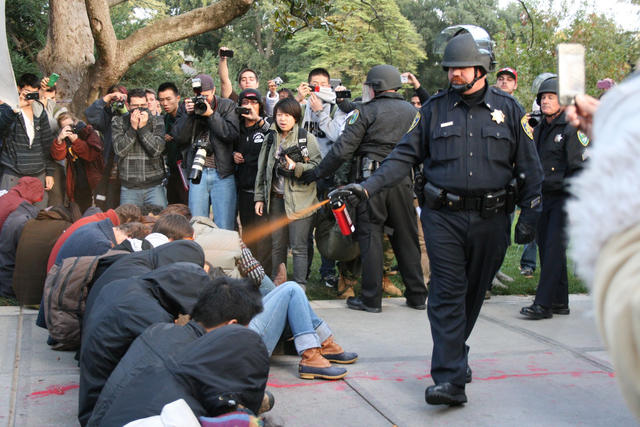 It was on this day in 2011 that the aerosol hiss heard round the world rang out from the quad at U.C. Davis.

Images of a campus police officer casually pepper-spraying a group of seated "Occupy UC Davis" protesters drew widespread condemnation. There were 10 months of investigations, an apology from the university chancellor, and $30,000 payouts to the students who were sprayed.

Then there was the cover-up. 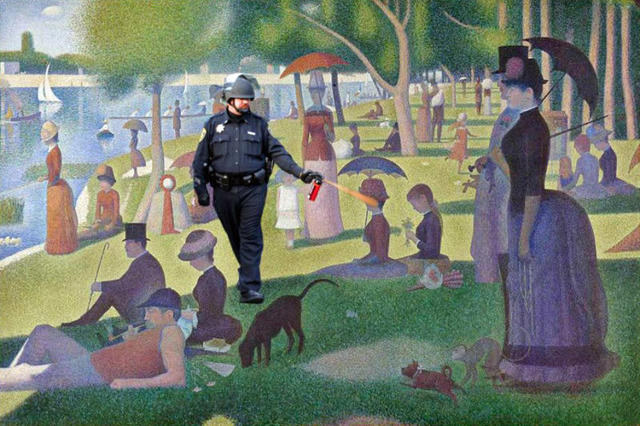 Pike was depicted spraying Parisians in Seurat's "A Sunday Afternoon on the Island of La Grande Jatte."

Two years after the incident, university administrators decided something needed to be done about all of that embarrassing negative coverage preserved online. So, according to documents obtained by the Sacramento Bee, they contracted with a communications firm for $15,000 a month to scrub posts about the pepper-spraying from Google search results.

The spending, at a time of severe budget cuts, set off a fresh round of anger from students and lawmakers. It also revived attention to the incident itself, which spread in memes that depicted the officer spraying SpongeBob SquarePants, Paul McCartney on Abbey Road, and Jesus at the last supper.

As for the officer who wielded the canister, Lt. John Pike, he was let go even though an internal investigation found he acted reasonably. He also got $38,000 in worker's compensation. All of that negative publicity, he said, sent him into a depression.