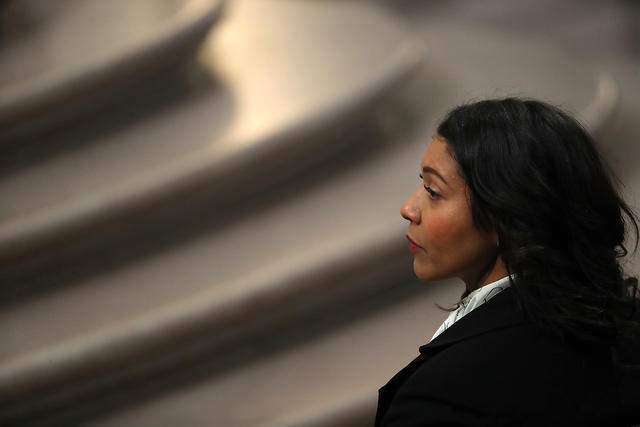 The night after Gov. Gavin Newsom attended his infamous soirée at the French Laundry, another prominent politician joined seven others for a birthday party at the Michelin-rated restaurant in Yountville: San Francisco Mayor London Breed. No rules were violated, but state guidelines at the time strongly discouraged such gatherings. Three days later, Breed banned indoor dining in San Francisco. S.F. Chronicle | A.P.

Across the bay, another mayor, San Jose's Sam Liccardo, apologized Tuesday for attending a Thanksgiving dinner with guests from five different households. A day earlier, he had urged his constituents to "cancel the big gatherings this year." CBS SF | Mercury News 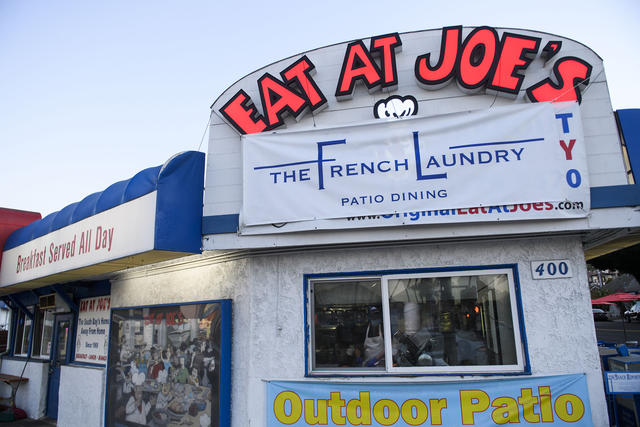 Eat at Joe's got a new name.

A Redondo Beach restaurant owner is defying a county order to shut down in-person dining, saying he found a loophole to stay open. Alex Jordan, owner of Eat at Joe's, hung a banner that reads "The French Laundry Patio Dining." "If it's good enough for Gavin Newsom," he said, "it's good enough for all of my clients." NBC Los Angeles

Los Angeles County shattered its daily coronavirus record on Tuesday, recording 7,593 new cases. The previous record: 6,186 on Nov. 23. The surge adds evidence that Thanksgiving gatherings fueled a new wave of cases. County officials believe the daily case load could hit 9,000 by next week. “We are in the middle of an accelerating surge in a pandemic of huge magnitude,” Public Health Director Barbara Ferrer said. L.A. Times | KTLA 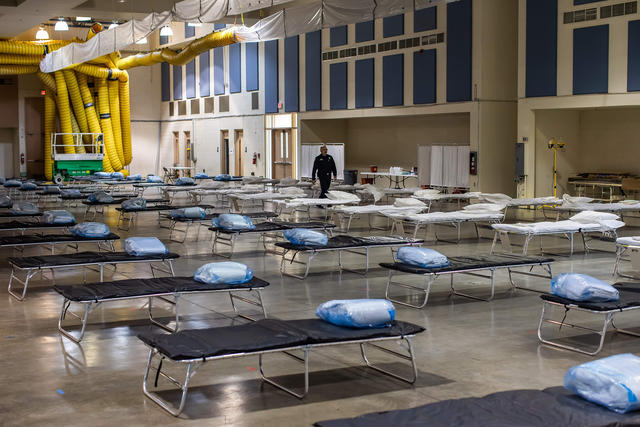 The California National Guard set up a temporary hospital in Indio in March.

State health officials say overwhelmed hospitals may have to turn patients away by Christmas. The crisis has exposed a potentially catastrophic weak spot in California's health care system: Not enough hospital beds. California has fewer beds per capita than all but two U.S. states, a dearth blamed on cost-cutting efforts. “This pandemic is a story of shortage," a hospital official said. N.Y. Times

In the early days of the pandemic, Newsom announced that 93,000 people had signed up to join an emergency health corps. All told, just 900 are now ready to be deployed. Sacramento Bee

California has given a staggering $400 million in fraudulent unemployment benefit payments to state prisoners, a state official said Tuesday. That's nearly three times the previously reported amount. In all, records show benefit claims were submitted in the names of 31,000 inmates, among them the convicted murderer Scott Peterson. A Republican state lawmaker demanded legislative hearings to determine accountability. L.A. Times | A.P. 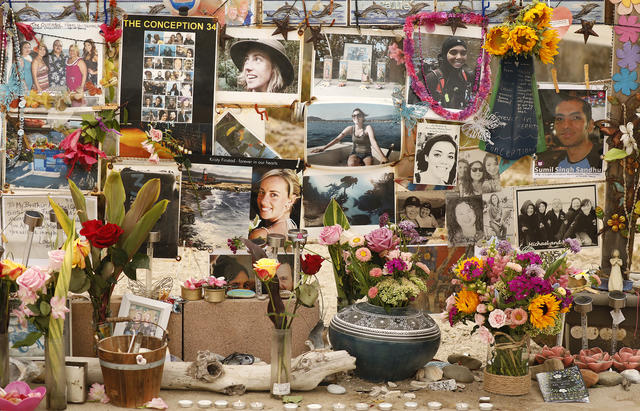 A memorial recalled the lives lost on the Conception in Santa Barbara.

The captain of a dive boat that caught fire near the Channel Islands last year, killing 34 people, was charged with 34 counts of seaman’s manslaughter on Tuesday. A federal indictment said Jerry Boylan, 67, failed to train his crew or post a roving night watchman on the Conception. As a result, a prosecutor said, "a pleasant holiday dive trip turned into a hellish nightmare." Noozhawk | A.P.

California has received more than $1.3 billion in federal aid to rebuild thousands of homes lost in wildfires in 2017 and 2018. Yet disaster victims have yet to get a single penny. The reason: years-long bureaucratic delays. Meanwhile, some people are still living in cars on their burnt-out properties. L.A. Times

In the winter of 2018, Samuel Kolb was staying at a rental cabin in Lake Tahoe with his son when he entered an altered mental state possibly brought on by epilepsy. He told his son to call for help. Soon Kolb lay bleeding, shot twice by a Placer County sheriff's deputy who accused him of trying to stab him with a fork. Doctors told him he'd never walk again. This week, Placer County agreed to pay Kolb nearly $10 million, the largest payout of its kind in the county's history. A.P. | S.F. Chronicle 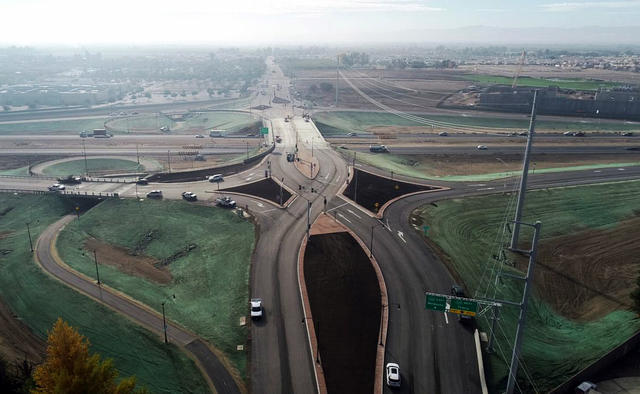 Manteca recently debuted the first diverging diamond interchange in California. Driving it is simple; understanding it less so. The design forces motorists to switch sides with opposing traffic on a freeway overpass, improving efficiency and eliminating risky 90-degree turns between oncoming cars. Some transportation planners want to do them all over California. Manteca Bulletin | ABC 10

A good video of a diverging diamond in action. 👉 Wikimedia 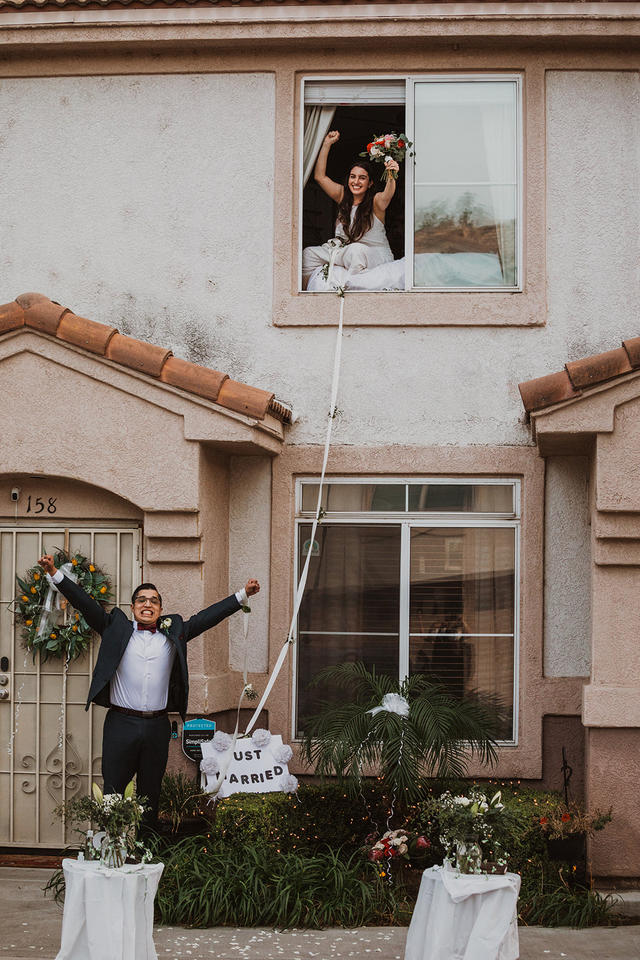 Lauren and Patrick Delgado were married according to schedule.

A Riverside bride-to-be tested positive for the coronavirus just five days before her scheduled wedding day on Nov. 20. So they improvised. Lauren and Patrick Delgado exchanged vows from a distance, with her donned in a white dress at the second-story window of her mother's home and him standing outside. “It was the most 2020 wedding I have ever shot during Covid-19,” the wedding photographer said. NBC News | KTLA 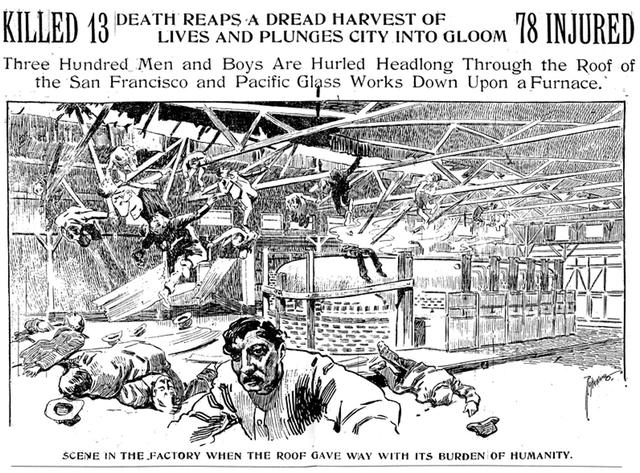 It was on this week in 1900 that San Francisco witnessed the deadliest spectator disaster in the history of American sports.

Unable to get inside, hundreds of boys and men clambered atop a glass factory whose roof offered a perch just beyond the edge of the stands. Some, it was later reported, joked about the flimsy roof straining to support their weight. Then, roughly 20 minutes after kickoff, the inevitable: The roof, one survivor recounted, “sprung open like a gallows trap,” sending a mass of bodies tumbling 45 feet onto the blistering hot furnace machinery below. 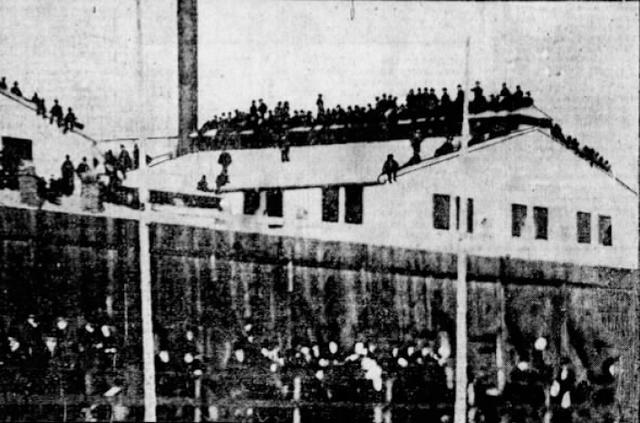 Fans piled atop the San Francisco and Pacific Glass Works building before the roof collapsed on Nov. 29, 1900.

News accounts described bodies writhing in agony. “I saw the poor fellow who had been chatting with me strike the furnace," one survivor told the Chronicle. "He curled up like a worm in the heat.”

As the dead were identifed, 23 in total, the scale of the loss came into tragic focus. Most were just children. The Chronicle ran the names in alphabetical order:

The roof collapse at the San Francisco and Pacific Glass Works building ranked as the worst loss of life ever at an American sporting event, a distinction unsurpassed to this day. Yet even as the city's newspapers splashed the story across their front pages, the sports sections included this item: Stanford 5, Cal 0.

While children lay dying at the edge of the stadium, the football teams played on. Later, as panicked mothers and fathers bellowed the names of their missing sons at the city's hospitals and morgues, Stanford fans, jubilant in victory, paraded down Market Street.

An official inquest was concluded within a week and placed all blame on the victims themselves. The story then dropped out of the news pages, never to return. In time, the 1900 Big Game catastrophe was all but forgotten. Today, a UC San Francisco building stands at the site of the old glass factory. No marker recalls the history.