On Mother's Day, a church in Butte County held an in-person service in defiance of stay-at-home orders. The next day one of the congregants tested positive. Health authorities now say as many as 180 were exposed to the virus. They've all been told to self-quarantine. KRCR | Sacramento Bee

Another Mother's Day church service in Mendocino County was blamed for an outbreak of three cases. Press Democrat | Mendocino Voice 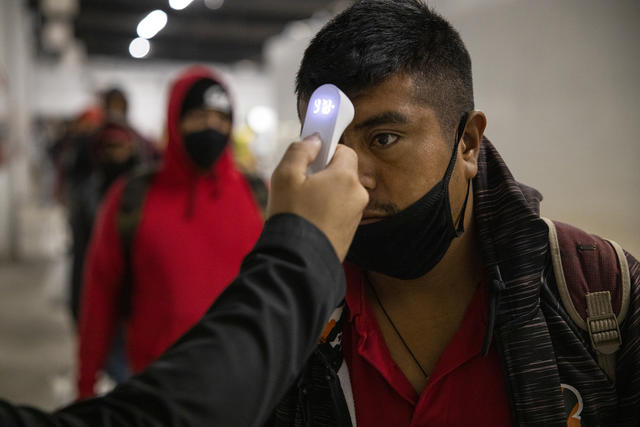 A farm laborer had his temperature taken before starting his shift in Monterey County on April 28.

In San Francisco, Latinos comprise 15 percent of the population but make up 43 percent of confirmed Covid-19 cases. The reason: Many have essential jobs for which staying home is not an option. "They're trying to do their part to get us out of this crisis," a workers rights advocate said. "Yet we can't provide face masks. We can't give them the space to give them 6 feet of separation between their co-workers." L.A. Times

Rural California is returning to pre-pandemic rhythms of life sooner than the rest of the state. But testing in many of those places has been scant, creating uncertainty about how much of the disease lurks out of sight. If the reopening works, the L.A. Times wrote, many Californians will be able to rebound from the coronavirus's economic carnage. "If it fails, the virus will swell in parts of California so far untouched." L.A. Times

The death toll is so high in California's nursing homes that privately run facilities are seeking immunity from lawsuits once the virus passes. "We're really not yet even seeing the epic scope of this in this state's nursing homes," a health care advocate said. "When we look back on this in 10 years, we will view it as more than anything a plague on the nursing homes." Washington Post

No visitors. No hugs from family. No shared meals. Isolation measures are taking a mental toll on nursing home residents. Mercury News 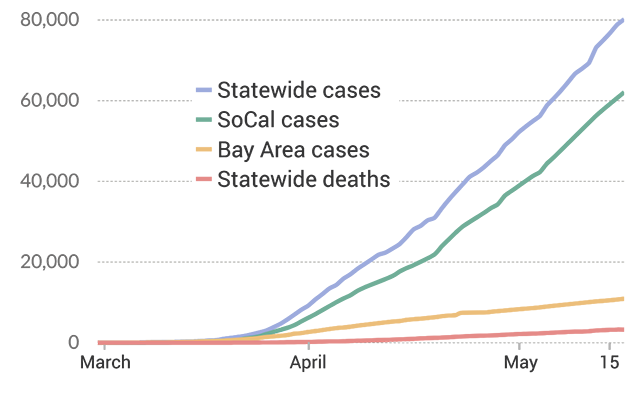 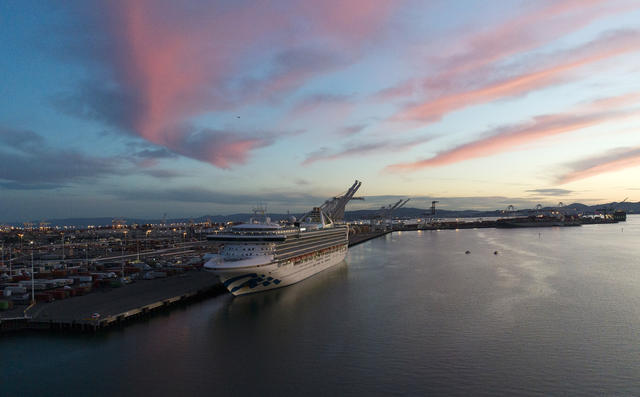 The Grand Princess docked in Oakland on March 9. A week later, the Bay Area was locked down.

In mid-March, as California moved to close things down, New York's governor reacted to the same idea with derision: "It was dangerous, he said, and served only to scare people. Language mattered, [Andrew] Cuomo said, and 'shelter-in-place' sounded like it was a response to a nuclear apocalypse." Here's an incredible reporting effort on how New York blew its response to the coronavirus — and suffered 10 times the number of deaths as California. ProPublica

It's falling to retail workers to enforce mask rules across California, adding tense encounters to jobs already fraught with health perils. At a Trader Joe's in Rancho Palos Verdes, a woman was asked to cover her face and had a 23-minute meltdown, which she recorded. "We are in America here," she said, "land of the free." N.Y. Times

Another video: Employees at a Dana Point Gelson's demonstrated the patience of saints as they dealt with a woman trying to enter the store without a mask. Reddit (~2:40 mins) 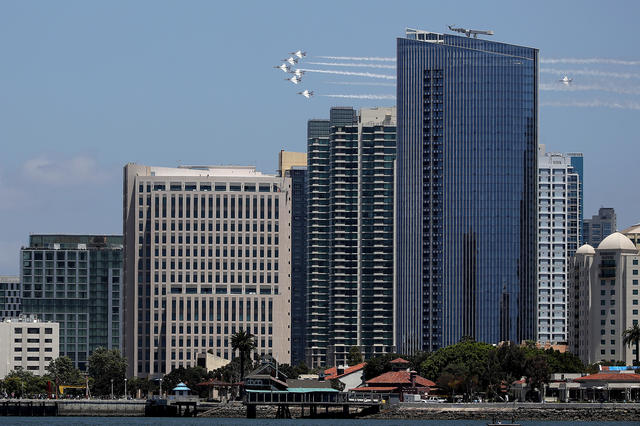 U.S. Air Force Thunderbirds did a flyover in recognition of health care workers in San Diego on May 15. 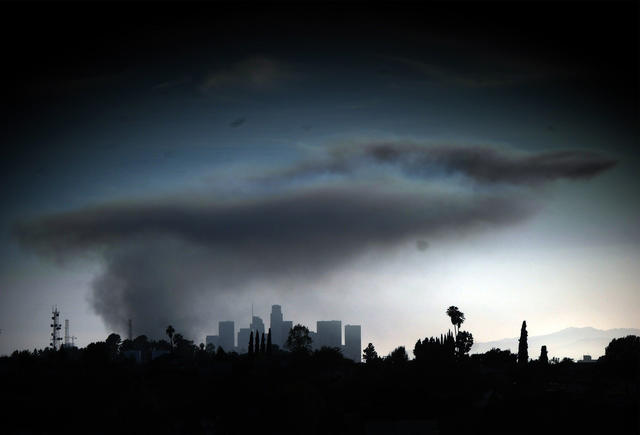 Smoke from a building fire gathered above Los Angeles on Saturday.

Eight firefighters remained hospitalized on Sunday, including two in critical condition, after a burning building in downtown Los Angeles exploded on Saturday. The flames were so intense that fire helmets melted. The cause of the fire at the business, a warehouse distributor with supplies for butane hash oil, was being investigated by arson investigators as well as the LAPD's criminal conspiracy section. L.A. Times | LAist 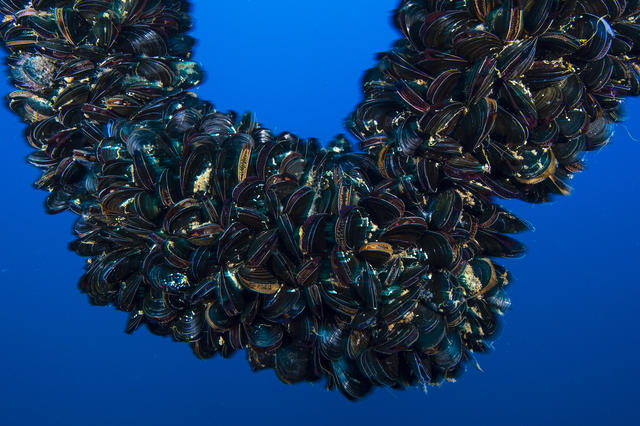 Mussels hung off the grow-line at Catalina Sea Ranch in 2018.

Ralph Pace for The Washington Post via Getty Images

Catalina Sea Ranch, the first aquaculture facility in federal waters, was touted as a solution to the world's food supply problems. Instead, the operator of the shellfish farm off the coast of Southern California ignored permit requirements, let equipment to fall into disrepair, and harvested seafood unapproved for human consumption. Last year, according to a lawsuit, the company's negligence caused a deadly boat accident. Pretty much everything that could go wrong has, a federal official said. "It's going to haunt the industry for quite a while." CalMatters 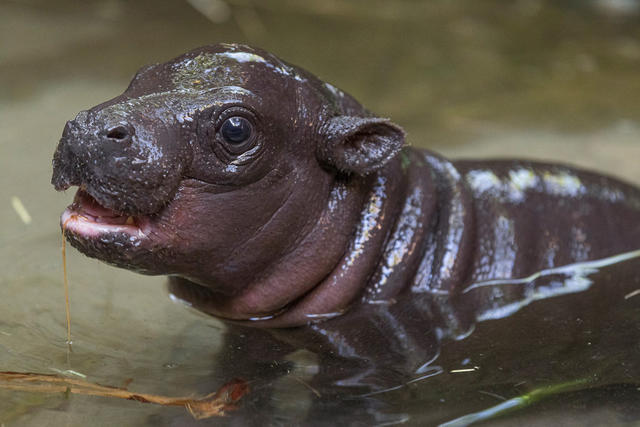 A male pygmy hippo was born on April 9.

The San Diego Zoo announced the birth of a pygmy hippopotamus, an endangered species. The 12-pound calf, not yet named, was the first successful pygmy hippo birth at the zoo in more than 30 years. "Mom and calf are doing very well," the zoo said. CNN | A.P. 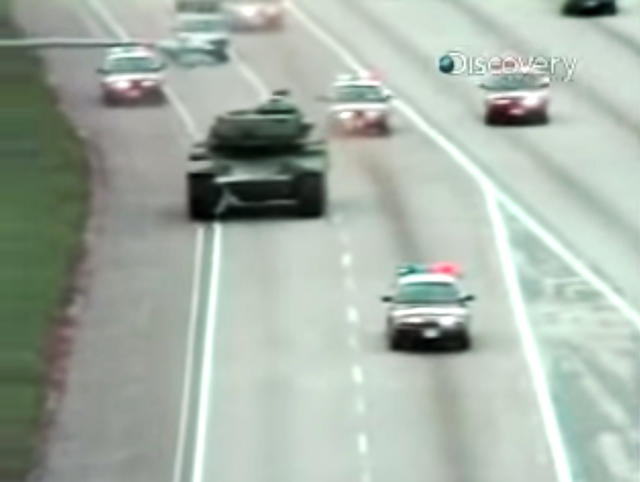 A tank piloted by Shawn Nelson tore through the streets of San Diego on May 17, 1995.

It was on this week 25 years ago that an out-of-work plumber walked into an unlocked National Guard armory, climbed inside a tank, pushed an ignition button, and rampaged through the streets of San Diego for 23 minutes.

Shawn Nelson, a 35-year-old Army veteran, aimed for maximum destruction: he drove the M-60 Patton tank over dozens of vehicles, squashing them like putty, and plowed through traffic signals and fire hydrants. Witnesses told the Union-Tribune that Nelson stuck his head above the turret and laughed. "He looked like he was having fun," one said.

With police and media helicopters circling overhead, he stopped only after becoming stuck astride a concrete freeway divider. Officers scrambled onto the tank, opened the hatch, and shot Nelson dead. Incredibly, no one else was hurt. 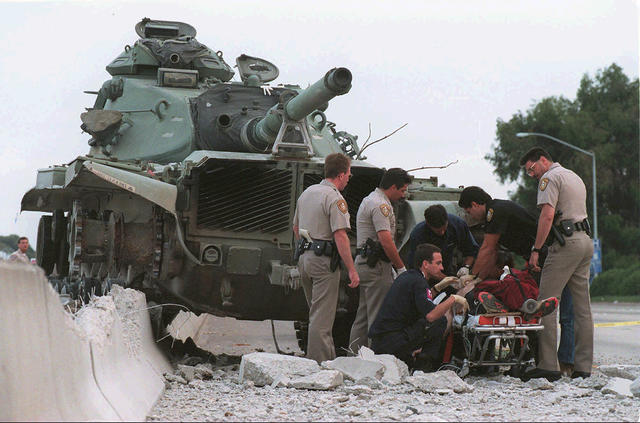 Police and paramedics tended to Nelson after he was shot on May 17, 1995.

Nelson, it became clear, had problems. He was broke. His parents died. His wife left him. He often binged on alcohol and meth. In the weeks leading up to the rampage on May 17, 1995, he talked to friends about suicide and his admiration for "Oklahoma," an apparent reference to the Oklahoma City bombing.

As a dazed San Diego sought answers, commentators pondered whether Nelson was a symptom of larger societal problems: the emasculation of the American male, perhaps, or middle-class rage. But no explanation seemed satisfactory. Jerry Sanders, the police chief in 1995, offered the Union-Tribune this moral to the story: "Don't leave the batteries and keys in the tank."

"Stay out of the street!" Watch police helicopter footage of the 1995 rampage. Discovery/YouTube