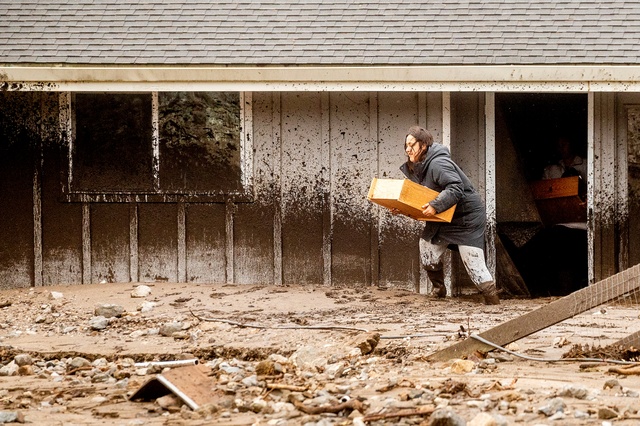 Hana Mohsin waded through mud with belongings in Monterey County on Wednesday.

A powerful atmospheric river stalled over Monterey and Big Sur on Tuesday, triggering mudslides that damaged about two dozen rural homes and blocked Highway 1. Communities in the Santa Cruz Mountains, where wildfires have loosened the soil, avoided any major debris flows. But forecasters warned that the danger had not yet passed. Across Northern California, numerous trees toppled, some onto cars and homes. In all, roughly 575,000 customers have lost power since the start of the storm. Monterey Herald | Mercury News | A.P.

See drone video of a mudflow near Salinas. 👉 @brianemfinger 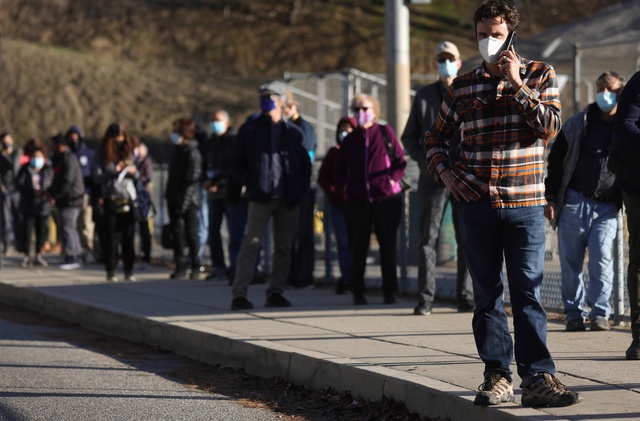 People waited in line to be vaccinated in Los Angeles on Wednesday.

Blue Shield of California is taking over California's vaccine rollout, a departure from the current patchwork system that has been plagued by inconsistency and sluggishness. The insurer has a massive network of providers and hospitals throughout the state. California has administered 50% of the vaccine doses it has received, ranking it among the bottom third of states for usage rates. S.F. Chronicle | A.P.

After a Long Beach restaurant flouted orders that banned dining service, the city shut off its gas. So the owner of Restauration, Dana Tanner, used an unauthorized line. When officials removed that, she converted her kitchen to electricity. Now that California has lifted its shutdown order, Tanner is getting no reprieve. She lost her health permit and it's unclear whether the city will approve another. Eviction is on the table. “I’m frustrated,” Tanner said Wednesday. “I just want to operate.” Long Beach Post

Mayor Eric Garcetti of Los Angeles got his coronavirus vaccine last Thursday. He's 49. Garcetti was moved up the line, his aides said, on the advice of medical personnel because of his contacts with the public. In Los Angeles County, only frontline workers and people over the age of 65 are currently eligible for the vaccine. L.A. Times | NBC Los Angeles

Garcetti on Dec. 21: “I’m not jumping any queue... I’ll wait for my place when it would naturally come."

S.F. Chronicle's editorial board on the city Board of Education's move to rename 44 schools: "While most of the country is rightly engaged in removing racist monuments to the Confederacy, only in San Francisco must the heroes of the Union be toppled: The board’s list includes Lincoln, Gen. William Tecumseh Sherman, and the abolitionist poet and editor James Russell Lowell."

Mayor London Breed: "What I cannot understand is why the School Board is advancing a plan to have all these schools renamed by April, when there isn’t a plan to have our kids back in the classroom by then." 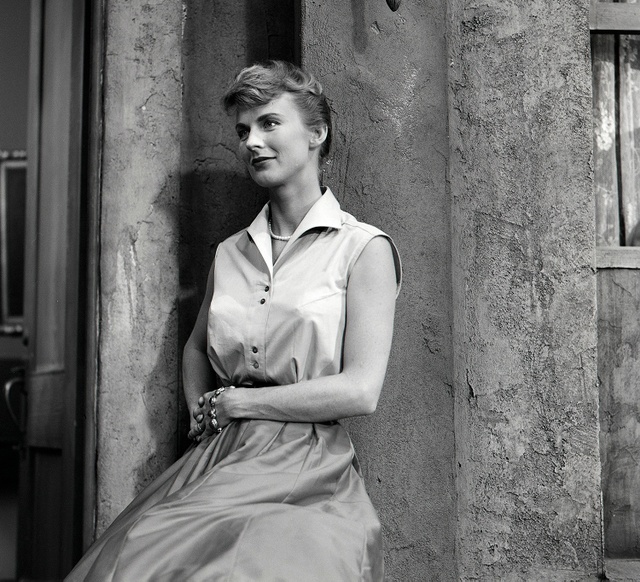 Cloris Leachman died on Wednesday. The actress won an Oscar for her portrayal of a lonely housewife in “The Last Picture Show,” but she was best known for her comic turns in Mel Brooks movies and on television shows like “The Mary Tyler Moore Show” and “Malcolm in the Middle.” In a career that spanned eight decades, Leachman was astonishingly prolific. She performed on stage and screen, became Miss Chicago, collected numerous Emmys, and at 82, competed with celebrities less than half her age on “Dancing With the Stars.” She was 94. N.Y. Times | Variety

In the week since she performed at the presidential inauguration, Amanda Gorman's star has continued to rise. The young L.A. poet is now being represented by IMG Models, a top talent agency. And next month, she'll have another turn in the national spotlight as she reads an original piece at the Super Bowl in Tampa, Fla. The appearance will mark the first time a poet has been part of the sporting event. L.A. Times | N.Y. Times 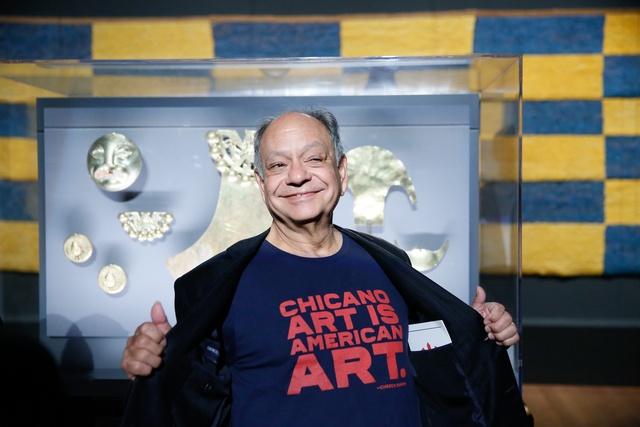 Cheech Marin has spent much of his life collecting art.

Cheech Marin, best known as half of the comedy team Cheech & Chong, has amassed one of largest collections of Chicano art in the world. Now, after four years of planning, his more than 700 paintings, drawings, photographs, and sculptures are getting a permanent home in the former Riverside public library. The Cheech Marin Center for Chicano Art, Culture and Industry is scheduled to open in the fall. N.Y. Times 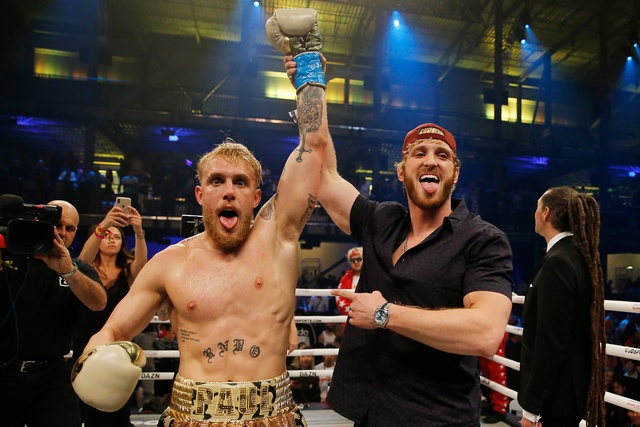 Jake Paul, the YouTube star people love to hate, is trying to make it as a legitimate boxer — and he's actually not terrible. He has yet to meet a truly formidable opponent, but some boxing professionals think Paul has the potential to revolutionize the sport. "Boxing owes these guys," Mike Tyson said. "They owe these YouTube guys some respect. ... These guys make boxing alive." ESPN 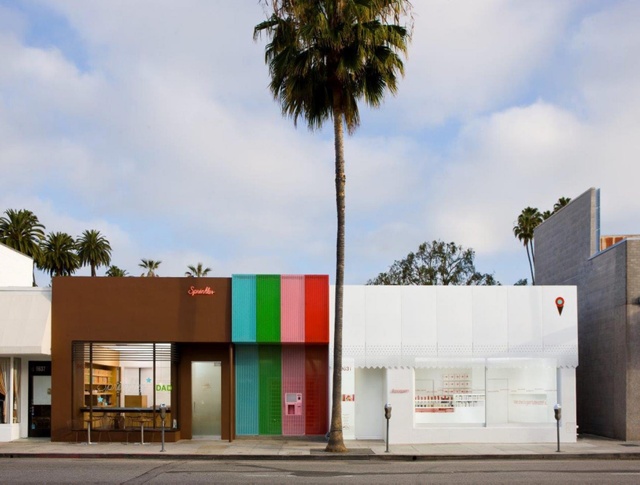 Insert your credit card into the cheerful pink machine outside the Sprinkles bakery, select from options such as lemon coconut and vegan red velvet, and out pops your confection in a tiny box. Since opening in 2012, the instant gratification devices have spread to 10 other locations across Southern California. Atlas Obscura