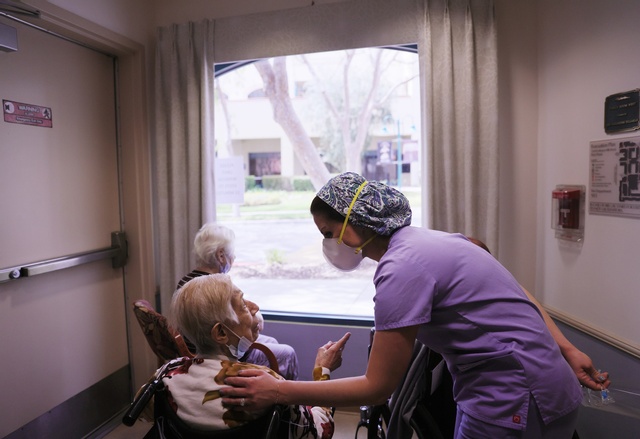 Residents at the Ararat Nursing Facility in Los Angeles prepared for in-person visits on March 24.

As California recorded the second-lowest rate of Covid-19 spread among U.S. states, the CDC director told reporters on Monday that she felt a sense of “impending doom.” Nationwide, infections have climbed 10% over the past week, raising fears of a fourth surge. "Right now I'm scared," a visibly shaken Dr. Rochelle Walensky said. Politico | N.Y. Times

California health experts are worried too. In the past, the S.F. Chronicle reported, the state has trailed a few weeks behind national trends. But some factors suggest we may be better positioned than we were before previous surges:

On Thursday, California opens up Covid-19 vaccine eligibility to people 50 and older, and two weeks later to all adults. There won't be enough doses to go around, but officials are growing optimistic that scarcity will soon transform into abundance. "When you make millions of people eligible overnight, there’s not millions of appointments immediately available at that moment,” Blue Shield's C.E.O. said. “But I would say by the time we get to the end of April, or potentially early May, I don’t think that’s going to be an issue.” CalMatters | L.A. Times

Santa Clara County fined businesses 50 times more than any other county during the pandemic. Violations ranged from the serious, such as operating indoors when prohibited, to the perplexingly minor, like playing "non-ambient music." “At this point," a restaurant owner said, "they’re literally just beating down small businesses that have already been decimated by the poor leadership of this county and the state.” Mercury News 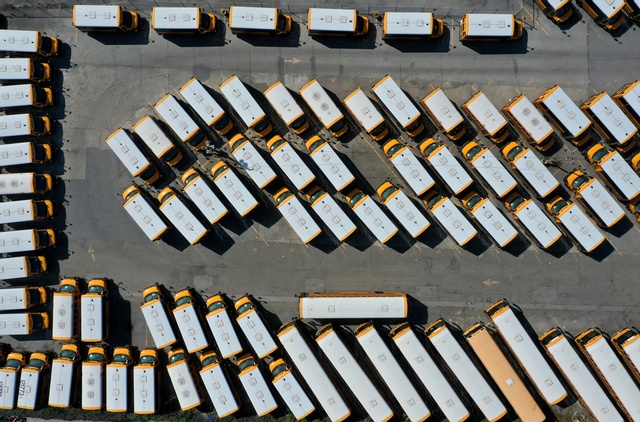 The New York Times on San Francisco's school reopening fight: "In the realm of education, the pandemic has reinforced the notion of a city divided by wealth and race. About one-third of the city’s schoolchildren, many of them white, go to private schools, one of the highest rates of any major city in the United States. Many of those private school students have been sitting in classrooms for months while public school students, who are disproportionately Black, Latino and Asian-American, have spent the year in virtual classes." 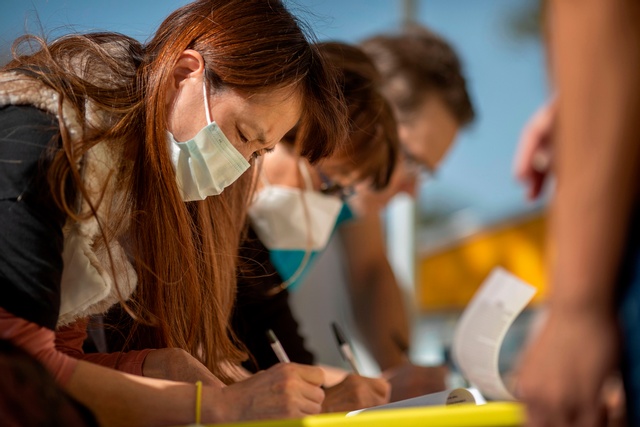 Democrats and independents who support the recall of Gov. Gavin Newsom have chafed at being portrayed as extremists. Hastin Zylstra, a Santa Ana Democrat who signed the recall petition, voted for Newsom in 2018. “It sucks to be lumped into a group of white supremacists and anti-mask Republicans when a few months ago I was text-banking for Joe Biden and helping in the Georgia runoffs,” he said. “It feels a little bit like a knife in the back.” Kaiser Health News

“We don’t want to be part of San Francisco anymore.” Nowhere is recall support stronger than in the Sierra foothills. S.F. Chronicle

It's not just Newsom. California has a case of recall fever. Shasta County residents are trying to oust supervisors over coronavirus restrictions. Sacramento activists launched a recall of Mayor Darrell Steinberg for failing to shelter homeless people during a winter storm. And San Franciscans are trying to recall school board members who spent hours renaming schools while classrooms sat empty. Politico described the upheaval as "coronavirus’ political side effects." 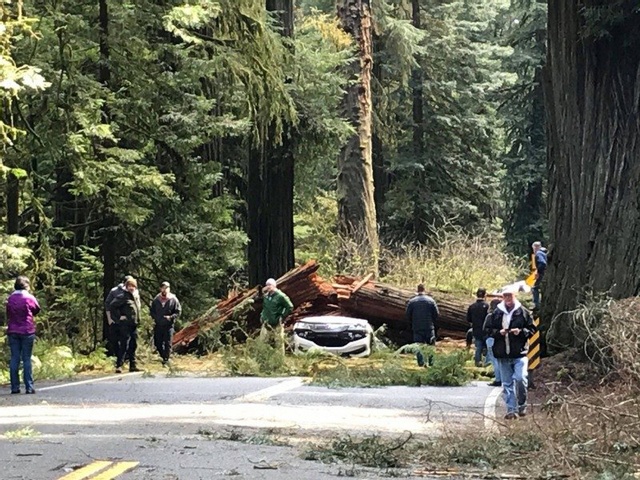 A redwood crushed a vehicle along Highway 199 last Thursday.

Jessica and Jake Woodruff, on a getaway for Jessica's 45th birthday, were driving along a densely forested highway on the North Coast last Thursday when a 175-foot-tall redwood came thundering down on their car, killing both. The couple left behind five children, ages 8 to 24. It was unclear why the tree fell on a day when winds were light. "I’ve been on the department for 19 years and I’ve been in this area 12 to 13 years and it’s very unusual," a CHP officer said. Wild Rivers Outpost | SFGate.com 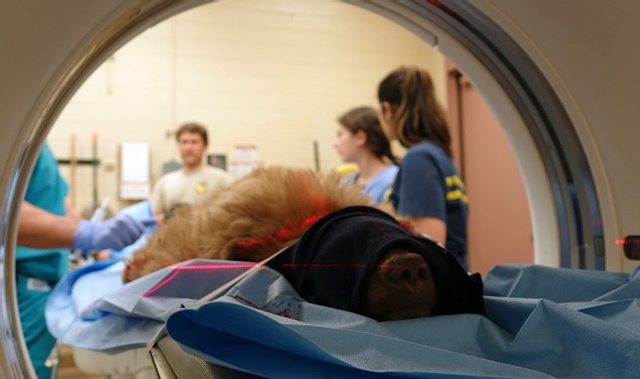 A bear displaying neurological abnormalities was studied at U.C. Davis in 2019.

In 2019, a small bear was filmed ambling up to a Tahoe snowboarder, its head tilted at an inquisitive angle. The cute interaction help make the video go viral, but scientists sensed something was awry. The bear was later found to have an inflamed brain that made it uncharacteristically fearless around humans. California veterinarians have encountered four similar cases in the last year, and they don't know what's causing it. Sacramento Bee | NBC News

Gif created from video by Voice of America

Every Sunday at sunset, a parade of LED-decorated bicyclists winds through Venice Beach led by a pied piper with white dreads known as the Captain. Everyone is welcome. The Venice Electric Light Parade began in 2015 as a joyful way to promote bicycle safety. Over the last year, it's doubled as a much-needed antidote to despair. Voice of America produced a nice short video on the new tradition.

In 1948, LIFE magazine dispatched the photographer John Florea to Santa Monica Bay to document the ways of the Southern California beachgoer. His photos recall a time along the shore when acrobatics were the rage, the old-timers played chess in suits and fedoras, and people just left their trash on the sand at the end of the day.

See a few of Florea's photos below, and many more here. 👉 Google Arts & Culture 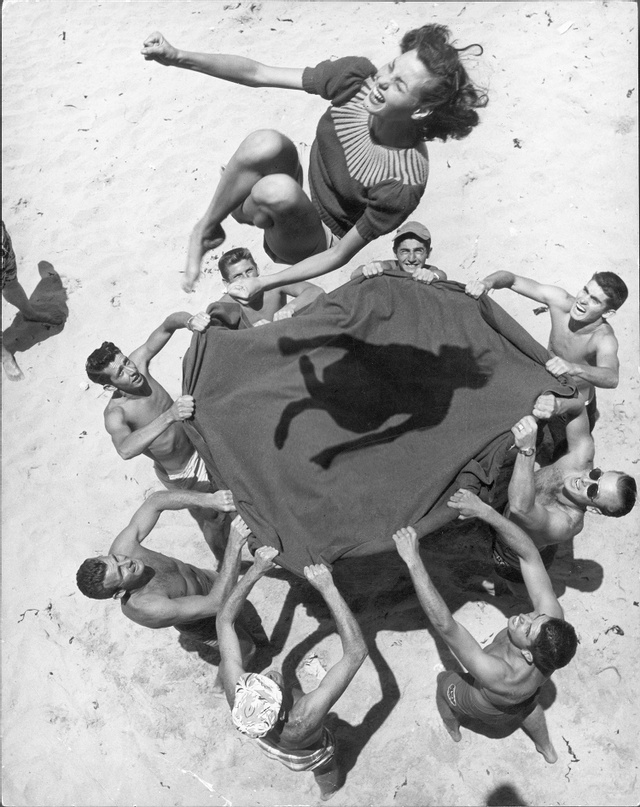 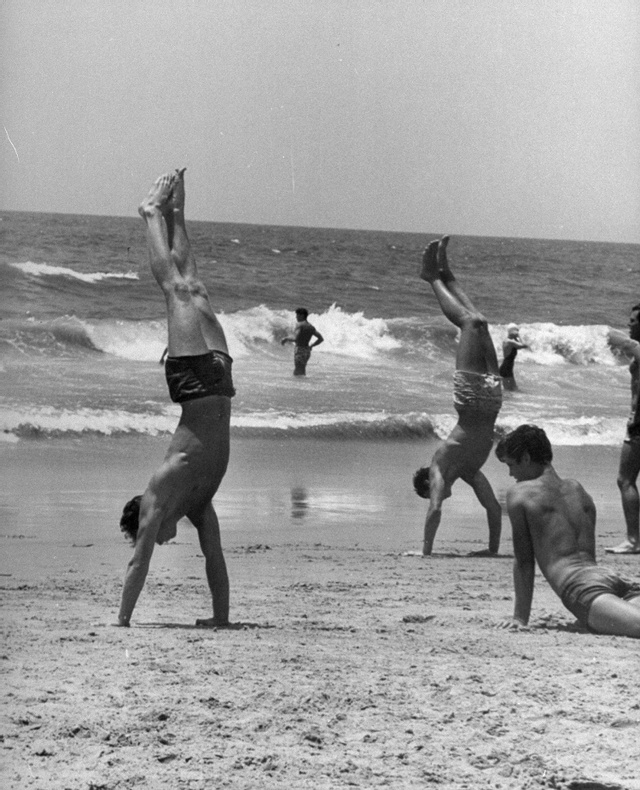 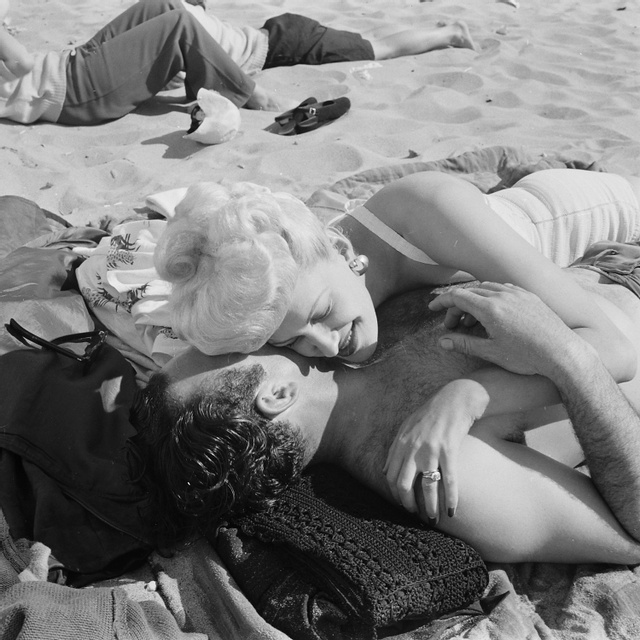 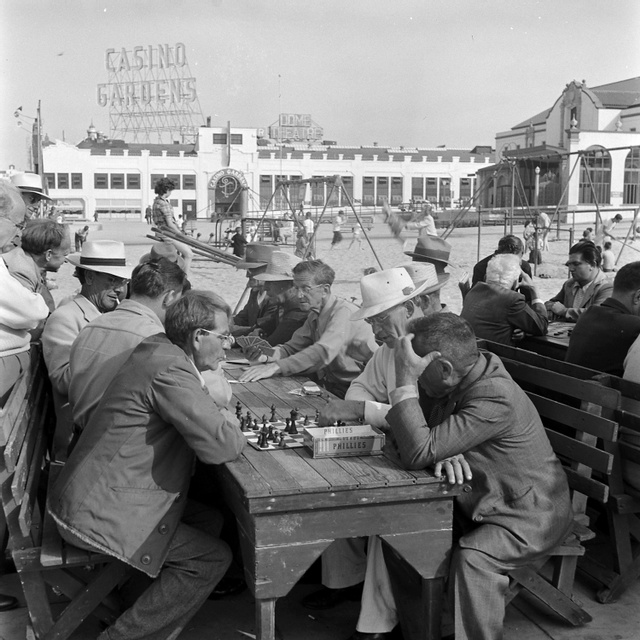 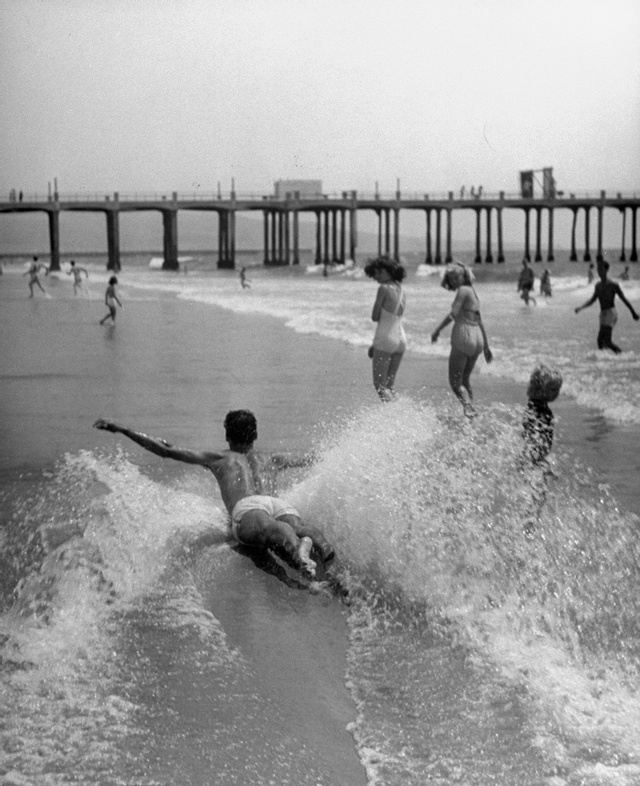 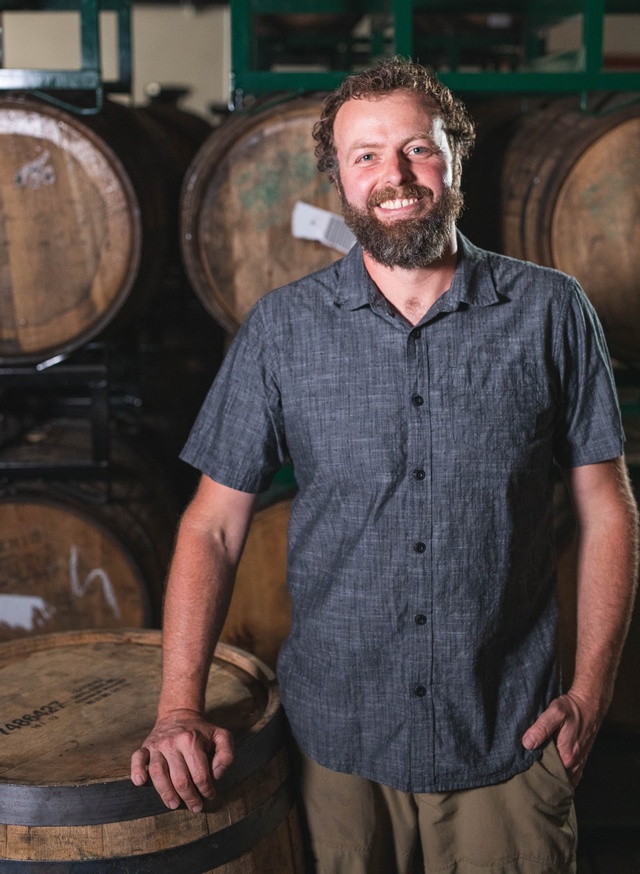 I moved to California from Ohio about two years ago. I continue to explore and find new treasures in this amazing state. Some highlights have been camping in the high Sierras, exploring Big Sur, and hiking in Yosemite.

I have been reading a number of the early issues of Wax Poetics, a quarterly music magazine that was first published in 2001. It focuses on vintage and contemporary music and how jazz, soul, funk, and rock all crossed paths with hip-hop and other sample-based music genres. The back stories on these incredible musicians from the 60's and 70's are given new life and purpose via the music and the context that Wax Poetics provides.

What’s a hidden food gem in your area? And do you have a favorite California beer?

A hidden food gem here in Santa Cruz is Hanloh Thai. Owner and chef Lalita Kaewsawang cooks food with so much identity and a true voice/personality. The flavor profiles, textures, spicing, and presentation are amazing. She only does pop-ups and my partner and I order it every week. So unique and truly an experience each and every time we enjoy it.

My favorite beer of 2020/21 has been 10°P from Urban Roots in Sacramento. It is so refreshing and a master class in czech style pilsner. Grab if you can find it!

David Axelrod (music composer/producer) Jack McAuliffe (New Albion Brewing) and Josh Davis (DJ Shadow). Each of these trailblazers changed their environments and pushed what people thought could be done in their respected worlds. Hearing the origin stories, reliving the scenes/feelings of those times and drawing parallels between my two favorite indulgences would be so thrilling. Private Press Brewing is the culmination of my love of brewing and music/record collecting; cracking a Private Press bottle would be a great way to get the conversation going.

What prompted you to start a subscription brewing service? What are the pros and cons of running this type of operation versus just a regular brewery?

I wanted to create a brewery that I could run instead of it running me. Something sustainable and focused on producing the beer styles I love to create: barrel-aged stouts and barley wines. The pros are no employees, low overhead, and flexible hours. The cons are budgeting due to only releasing a few beers each quarter, and doing everything yourself. At the end of the day, it is still very rewarding and a passion project through and through. I feel very fortunate to be doing this project here in California with my family, a dream come true.

I gave you a heads up last week that the newsletter would be off next week for Spring Break. Now I need to tack on another day because of a death in the family. The newsletter will pause Friday and return two Mondays later on April 12. Thanks for your understanding.