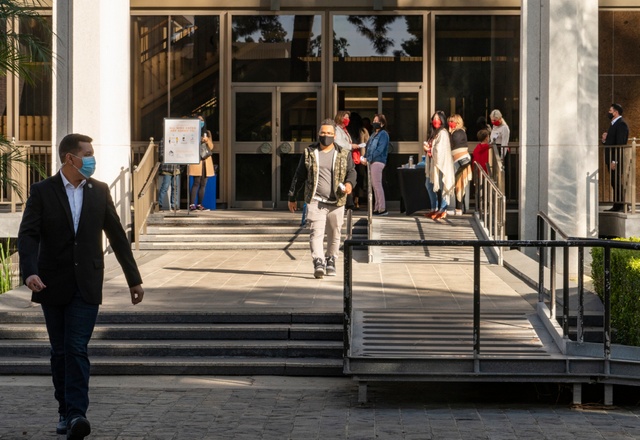 People gathered at Harvest Rock Church in Pasadena on Sunday.

A number of California churches reopened their doors Sunday after the Supreme Court ruled Friday that the state's ban on indoor religious services violated the Constitution. New guidelines now limit attendance to 25% of capacity, and leave in place a ban on singing and chanting. Even those restrictions, however, seemed likely to elicit defiance. “Fifty percent of worship is singing," a Pasadena pastor told his congregation on Sunday. "We’re gonna sing no matter what.” A.P. | S.D. Union-Tribune

Experts have grown alarmed that the vaccine rollout has been too slow to prevent another surge unleashed by a highly infectious mutant virus first identified in Britain. Research published Sunday showed the strain is doubling its prevalence among confirmed infections every week and a half. “We would all love to be able to say it’s all downhill from here, but we can’t say that based on these variants,” a Bay Area health officer said. S.F. Chronicle | Washington Post 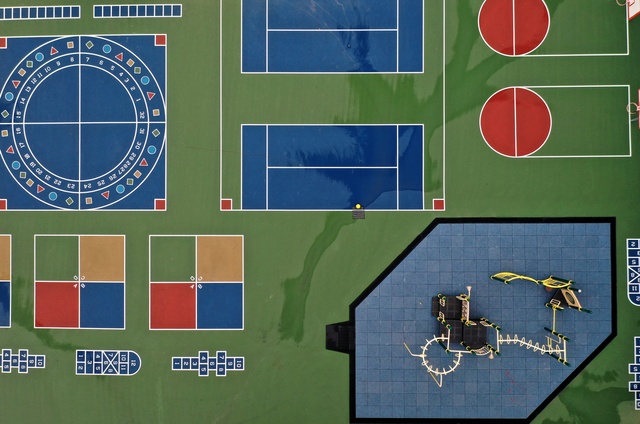 An empty schoolyard in San Francisco.

Unions representing San Francisco teachers announced a deal with district leaders on Sunday to return to the classroom, snapping a monthslong impasse that has infuriated parents and city leaders. Teachers would return once they can get vaccinated and the city's Covid-19 spread slows from the status of "widespread" to "substantial." The agreement raised hopes that at least some schools would open before summer. Even so, San Francisco's city attorney, which has sued to force school reopenings, was unsatisfied. Schools could safely open now, a spokesman said. S.F. Chronicle | S.F. Examiner

In rural Tehama County, draped across the northern Sacramento Valley, many residents have been skeptical of the coronavirus and hesitant about the vaccine. Some thought the pandemic was a hoax that would evaporate after the election. “We had a mindset like, ‘We’re not going to get it. That’s just in the cities,’” said Sonia Bravo, 34. Then all nine members of her household got the disease. After nearly dying, Bravo's father now relies on a portable oxygen tank. L.A. Times

Rep. Kevin McCarthy, the House minority leader, asked Rep. Liz Cheney last week to apologize for her vote to impeach former President Trump, hours before a contentious House GOP conference meeting, sources told Axios. She refused, yet easily kept her job. McCarthy, who has been desperately trying to unify the Republican establishment and the pro-Trump wing of his conference, emerged stronger as a result. “This Republican Party is a very big tent," he said after the vote. "Everyone is invited in.” 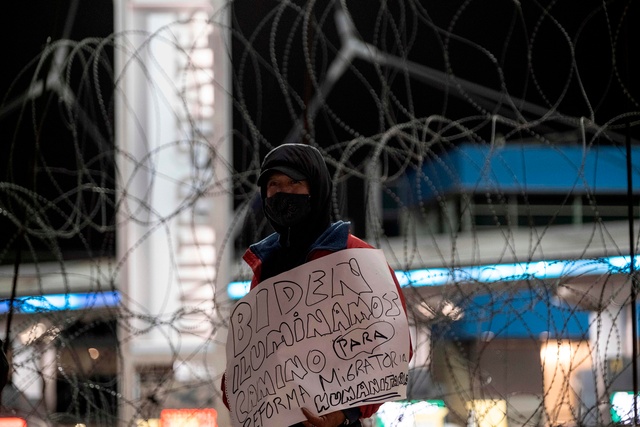 A migrant held a sign calling on President Biden for "humane immigration reform" in Tijuana on Jan. 19.

President Biden's first immigration crisis is already unfolding at the U.S.-Mexico border, the N.Y. Times reported. As thousands of families surge toward the border with expectations of a friendlier reception, health authorities in San Diego have arranged housing for arriving migrants in a downtown high-rise hotel. "We know that the numbers are only going to keep rising dramatically,” a social services official in San Diego said.

Mayor Eric Garcetti's wife spoke out about enduring daily protests over racial injustice and coronavirus restrictions outside the family's Los Angeles home. Sometimes the couple's 9-year-old daughter couldn’t do her homework or sleep. “I would be lying to you,” Amy Elaine Wakeland said, “to not tell you that it is hard on my daughter and the children in this neighborhood.” She added, "I don’t think you build movements by yelling at people.” L.A. Times 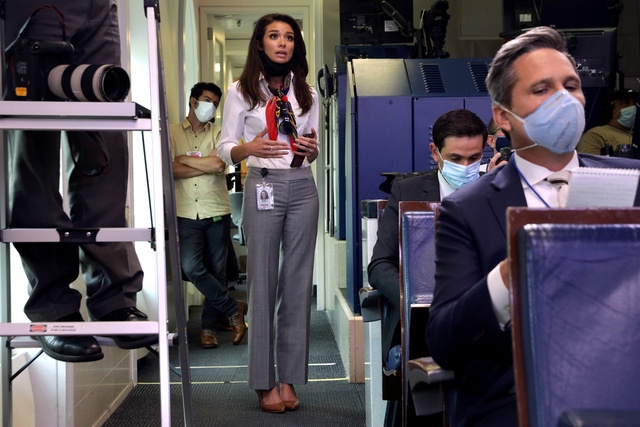 Chanel Rion of One America News spoke during a news conference in the White House on Sept. 18.

A reporter spent 11 straight hours watching One America News. The conservative San Diego network has been eating into the audiences of Fox News and Newsmax after they alienated viewers by acknowledging the fair election win of Joe Biden. On a day when the top news story was a massive $1.9 trillion Covid-19 relief package, OAN was focused on "Hunter Biden’s lawyer’s supposed connection to a DOJ official, CNN’s Brian Stelter Biden toadyism, the 'pedo money' flowing out of the Lincoln Project, and a pro-Trump beauty vlogger claiming Sephora had 'canceled' her." Politico

The New Yorker's Isaac Chotiner, famous for his politely unsparing interviews, spoke with the head of the San Francisco Board of Education, Gabriela López, about the decision to rename 44 city schools, including those named after Abraham Lincoln and George Washington. It's a painful read. López, when asked to respond to significant historical errors in the renaming panel's reasoning, said: "I think what you’re pointing to and what I keep hearing is you’re trying to undermine the work that has been done through this process. And I’m moving away from the idea that it was haphazard." 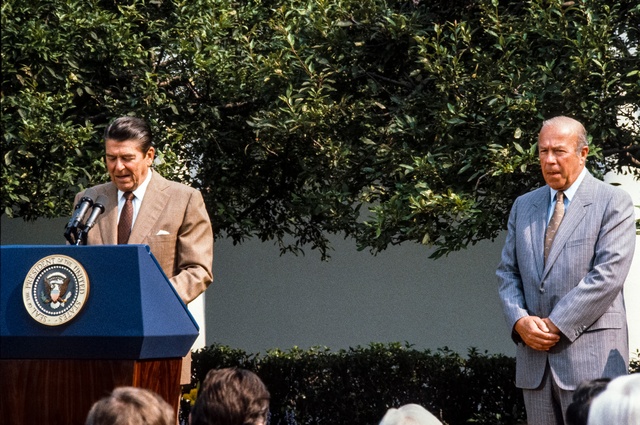 George Shultz, right, and President Ronald Reagan in Washington in 1982.

George Shultz, a giant of American diplomacy who as Ronald Reagan’s secretary of state tried to improve Cold War relations with the Soviet Union and forge peace in the Middle East, died on Saturday in Stanford. A lifelong Republican, he was one of only two people to have ever held four Cabinet posts in American government. After leaving Washington in 1989, Shultz moved to California, where he wrote for academic journals, advised Gov. Arnold Schwarzenegger, and taught at Stanford. He was 100. N.Y. Times | S.F. Chronicle 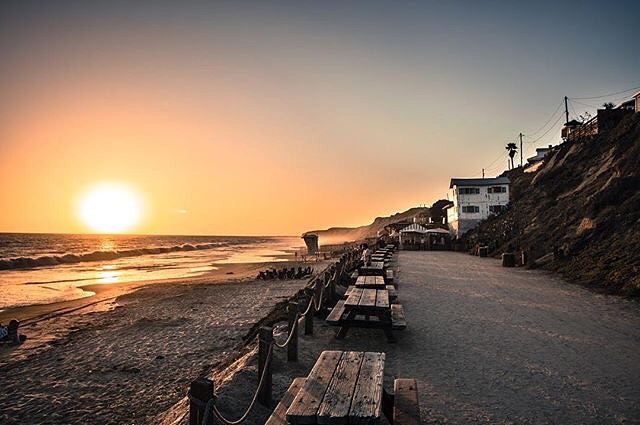 There's a restaurant on the sand at Crystal Cove State Park where you can eat barbecue around your own fire pit. The L.A. Times said a visit to the Beachcomber Cafe feels like being transported to a 1930s beach resort. It was included in this list of California's best al fresco restaurants by the reservation website OpenTable, which based its analysis on a database of 12 million reviews. 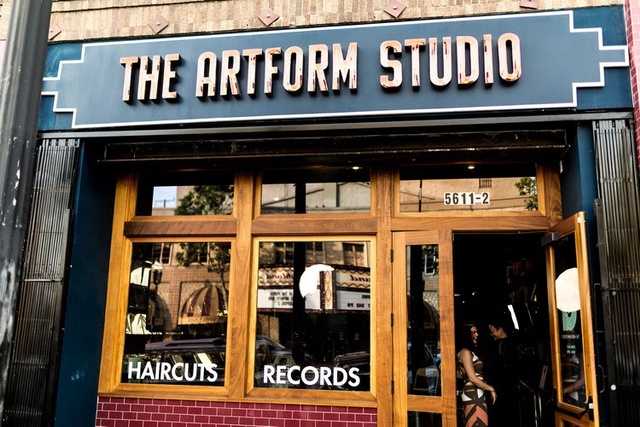 … Sherry Younge, a hair and makeup specialist in Los Angeles who owns The Artform Studio — a salon, record store, and homebase for a global streaming radio show — with her husband, the music producer Adrian Younge.

A. I personally love visiting San Francisco. I love it more and more every time I go. The intricate designs of older homes and buildings are always beautiful to be surrounded by. The drive onto the Golden Gate Bridge and seeing the water and feeling the cool breeze of the San Francisco Bay is always memorable. The food — especially the seafood at Fisherman’s Wharf — is delicious and so fresh. Boutique shopping in parts of the city is what I enjoy, supporting creative artists.

We have been playing the new Jazz is Dead 005 record featuring Doug Carn, produced by Adrian and Ali Shaheed Muhammad [of A Tribe Called Quest]. It keeps us moving while we work at The Artform Studio.

I really love going to Kindness & Mischief Coffee Shop a block away from us. I always order my favorite hot chai tea latte with oat milk and pair it with one of their flavorful pastries. They have great breakfast sandwiches, toast, and bowls.

Can you tell me a little about what prompted the idea for a salon that doubles as a record store? It seems like that would create a sense of community that a lot of record stores and salons don't have on their own.

My husband Adrian is a DJ and music producer, and we decided to collaborate our love for our art into one space. We play records from ‘60s and ‘70s jazz, soul, progressive rock, and world music while we work on cuts and color designs for our guests. Even during the pandemic, we have managed to keep music playing as a way to keep our community alive with streaming Artform Radio hosted on Worldwidefm.net every Thursday, from 12 p.m to 8 p.m., with Dj sets every hour.

Our DJs consist of some of us here at Artform. I have a set I call “The Artforms of Yesterday” where I play records straight from our retail bins that have artists with detailed hair, makeup, and styles on the album covers. I talk about style history, how those styles came about, and how it may relate to us during these times. Some of our DJs are regular guests in our salon chairs as well.