California announced new guidelines that allow health workers who test positive for the coronavirus to stay on the job, a drastic step to ease the strain on short-staffed hospitals. Labor leaders reacted with outrage. "It's a major disaster waiting to happen," said Zenei Triunfo-Cortez, of the California Nurses Association. "I think it's callous and it's putting our patients and ourselves in grave danger." S.F. Chronicle | KCRA 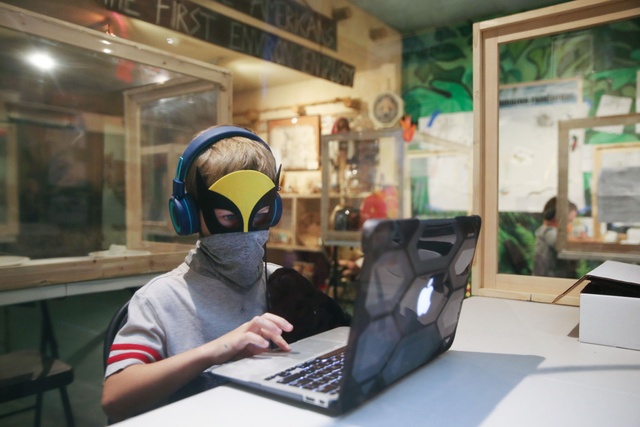 Newly released data offered the most comprehensive view yet of how California students fared during the pandemic — and it's troubling. After five straight years of gradual improvement, test scores fell significantly across the board last year, while achievement gaps between Black and Hispanic students and their white and Asian peers grew even wider. Among all students, more than half failed to meet minimum standards in English, and roughly two-thirds fell short in math. Edsource | L.A. Times

When General Motors sided with the Trump administration in a fight with California over emissions standards in 2019, Gov. Gavin Newsom announced a halt to all government purchases from the automaker. Three years later, with a Democrat in the White House, GM said on Sunday that it had agreed to recognize California’s legal authority to set its own tailpipe standards under the Clean Air Act. "We’re all in on putting everybody in an [electric vehicle],” said Omar Vargas, GM's vice president. Reuters | Detroit News 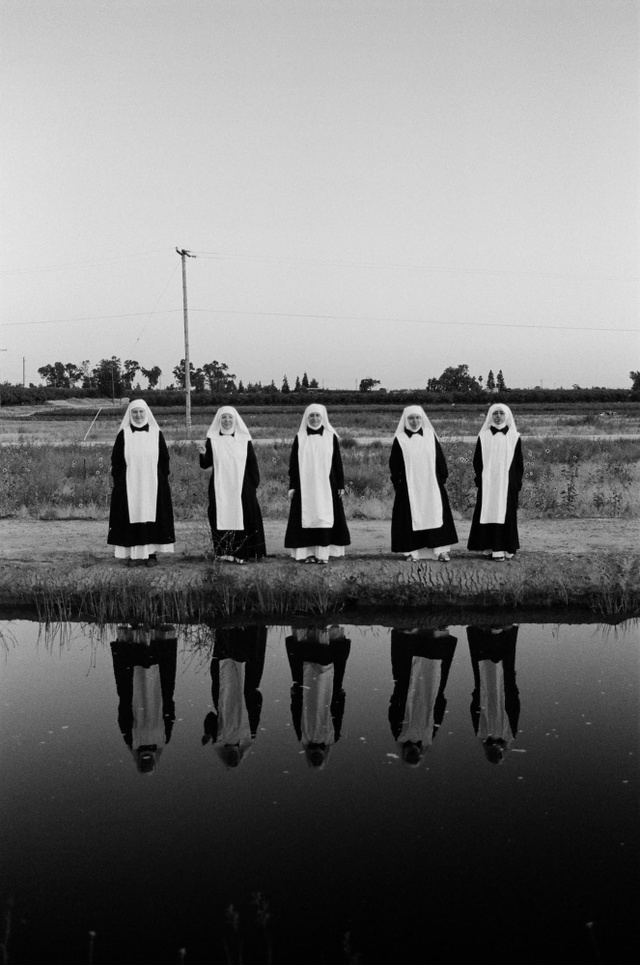 From left: Sisters Quinn, Kate, Sophia, Luna, and Camilla near their Merced farm.

The Sisters of the Valley is not your typical religious order. In fact, the nunnery on a marijuana farm in Merced County is unaffiliated with any religion at all. The feminist sisterhood was formed on a lark in 2013 as a repudiation of the establishment, but its members appear to be sincere about their stated mission: to heal the world — one joint at a time. Rolling Stone paid a visit and got some fantastic pictures. 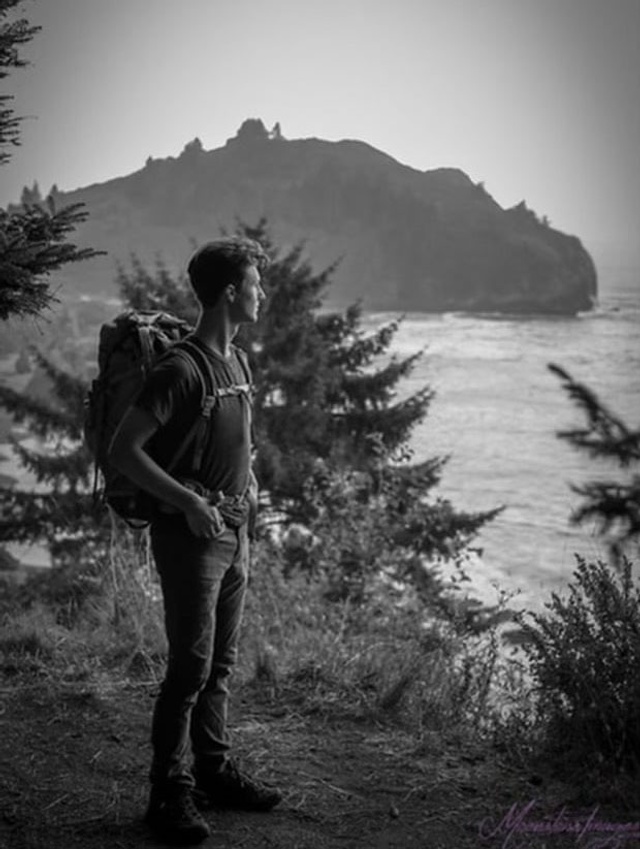 Courtesy Corey Lewis, via the Guardian

Hunter Lewis, 21, spent years creating an elaborate treasure hunt for his friends and family along the North Coast. On Dec. 30, he set off in a canoe from Trinidad state beach on a mission to hide the final prize. He never returned. In recent days, pieces of the canoe have washed up on shore, causing searchers to refocus. “We know it is not a rescue operation," Lewis' father said. "It is a recovery of the lost Lewis treasure: my son Hunter’s body.” The Guardian

In 2016, an analysis of San Francisco's luxury Millennium Tower found that it was sinking into the soft soil, leaning 6 inches at the top since its completion in 2008. Last week, the engineer responsible for shoring up the 58-story tower gave city officials an update: Now it's leaning 26 inches, adding 3 more inches of tilt annually. If it isn't fixed soon, he said, the plumbing and elevators will start having problems. NBC Bay Area 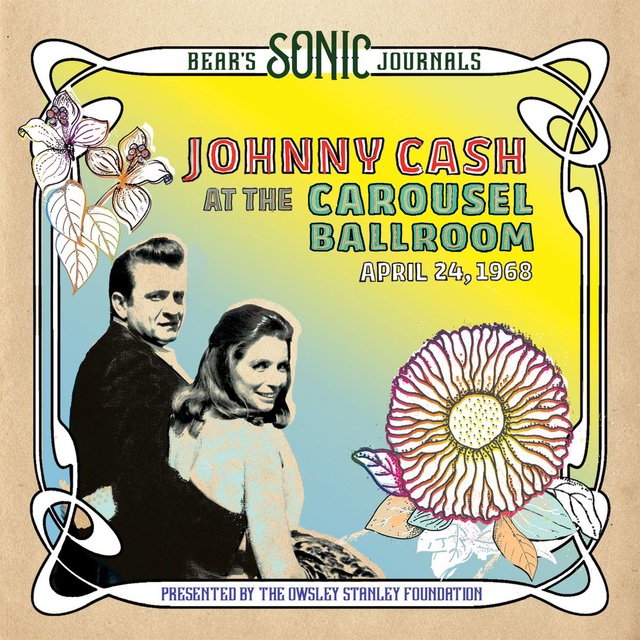 The album cover for "Johnny Cash At The Carousel Ballroom."

On the night of April 24, 1968, Johnny Cash took the stage at the Carousel Ballroom in San Francisco. It was just one week before the release of his landmark Folsom Prison album, which would revive the country singer's flagging career. Owsley Stanley, the Grateful Dead sound man and LSD chemist, made a recording of the performance that was subsequently lost to time — until now. The entire album, "Johnny Cash at the Carousel Ballroom," has now been released for free. KPIX | SFist

Video captured the incredible last-second rescue of a pilot who had been forced to land his aircraft on railroad tracks in Pacoima on Sunday. With an oncoming train blaring its horn, several officers struggled to free the injured man from the Cessna cockpit. As they finally pulled him free, the train smashed into the wreckage of the plane with a terrifying boom. Everyone was fine. L.A. Daily News | KABC

"It was the craziest thing I've ever seen."

A sea lion turned up on a San Diego freeway Friday some 3 miles from the Pacific, halting traffic. Rescuers said it wasn't the first time the 200-pound juvenile male sea lion had wandered to an odd location. In November, it was found near the airport. In December, it showed up along the boardwalk in Mission Beach, near a deli in Mission Bay, and at the Navy base on Point Loma. City News Service | KABC

California swore off new freeway building more than two decades ago because of environmental concerns and budget shortfalls. Yet Bakersfield is now nearing completion of a freeway project that officials have heralded as a solution to gridlock between the city's east and west sides. Critics see it differently, describing the so-called Centennial Corridor variously as "retrograde," "tragic," and “one of the dumbest highway projects in the entire U.S.” The end result will be a 1.7-mile ribbon of concrete through the middle of Bakersfield's Westpark neighborhood that swallows up 310 homes and displaces nearly 1,000 people.

Satellite imagery over the last seven years tells the story. 👇 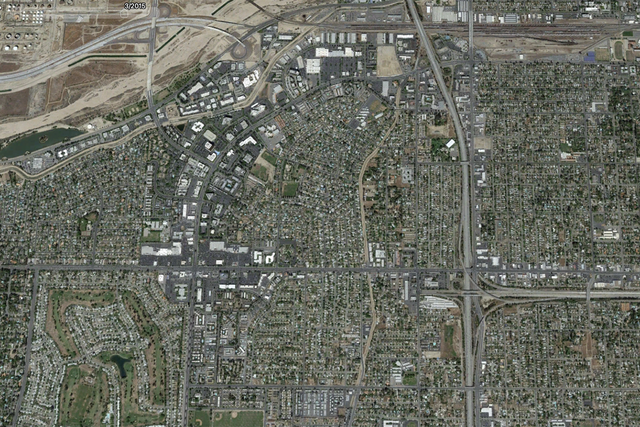 Central Bakersfield in 2015, before construction commenced on the Centennial Corridor. 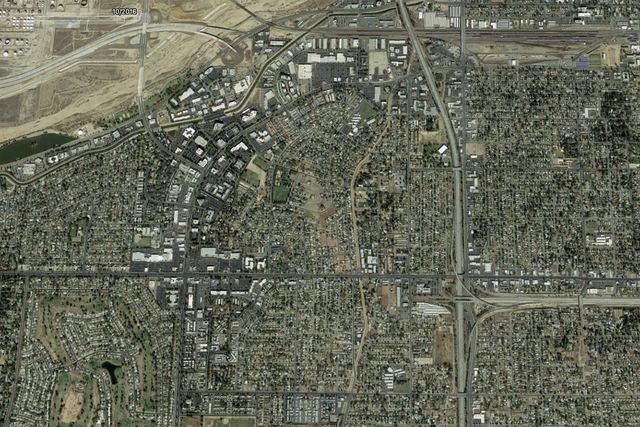 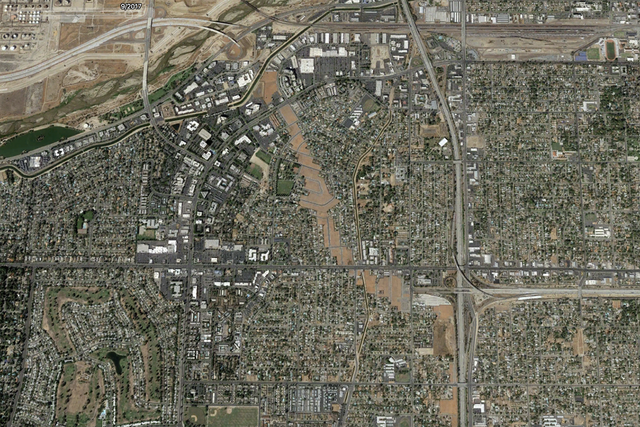 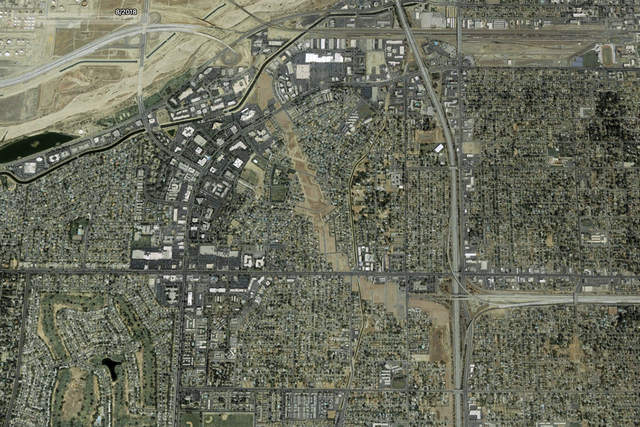 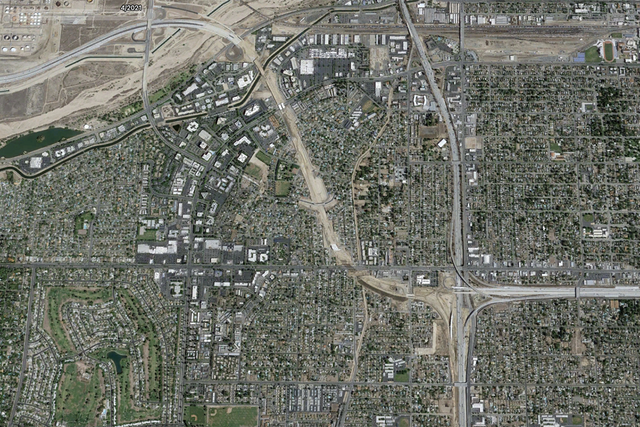 The hometown columnist Robert Price called the process of clearing the path one of "random injustice." Many displaced homeowners have been made whole — at least financially. But others along the edge of the highway have seen their home values plummet. Vicky Gresham described the horror of watching a 12-foot sound wall rise along her backyard, blocking the sunset. "It's like a prison," she told Price. The freeway is expected to open by the end of this year.

See a time-lapse of Bakersfield from 1984 to 2020, with the gash created by Centennial Corridor emerging after 2016. 👉 Google Earth 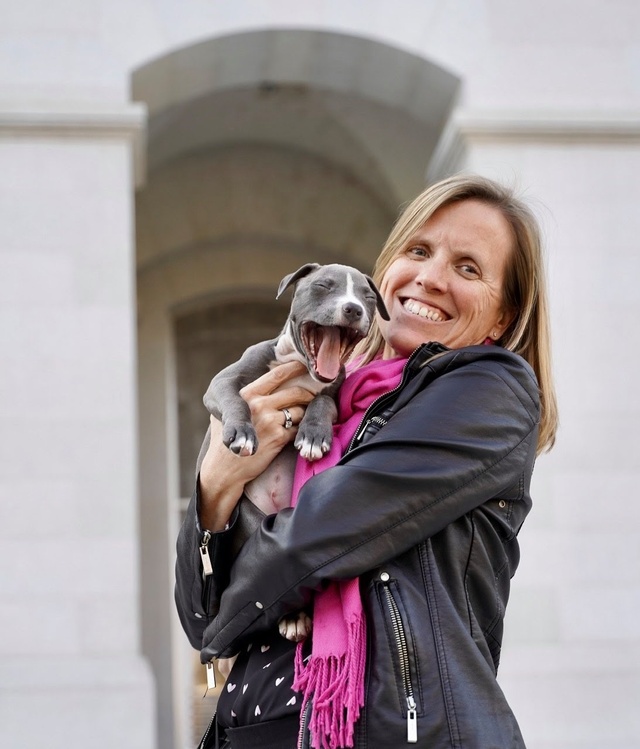 A: Everyone in California should visit a farmworker community like those in the San Joaquin, Salinas, and Coachella valleys where nearly $50 billion worth of the world’s food is produced every year. I volunteered at some COVID vaccination clinics last winter for farmworkers and their families in the Cantua Creek and Lanare communities in Fresno county. The humility and kindness of the people I met, who labor in often intense and extreme weather conditions and at heightened risk of contracting COVID, left a deep impression on me. We should all see where and how California’s farmworkers and their families live to gain a deeper appreciation for our groceries and to strengthen our support for improving their working and living conditions.

My husband and I listened to Isabel Wilkerson’s "Caste: The Origins of our Discontents" during a recent road trip to and from the East Coast. Maybe not everyone’s idea of vacation material, but we were anxious to continue our personal journeys toward active anti-racism. Wilkerson connects many painful dots and produces ample evidence of America’s long history of racial violence that shows up in systemic and structural ways throughout modern society. I am glad we listened to the book as we moved throughout the country, passing historic sites and places while being reminded that their stories depend on the perspective of who is doing the telling.

I am fortunate to work with the Community Alliance of Family Farmers, which advocates on behalf of thousands of California’s smallest farmers. Sacramento is the so-called “farm to fork'' capital, so we are able to shop at farmers markets year-round and purchase seasonal fruits and vegetables directly from local producers. Specifically, I love supporting and volunteering with the Yisreal Family Urban Farm, which grows herbs, fruit, and other produce on the grounds of a shuttered public school a couple miles from our house. Their work to transform neighbors’ backyards into edible gardens inspires me.

I’d invite Marce Gutiérrez-Graudiņš (founder of Azul), Veronica Garibay-Gonzalez (co-founder of Leadership Counsel for Justice and Accountability), and whoever I could identify as the wealthiest Californian ready to give away their fortune to maximize the power of community voices in pursuit of environmental justice. Right now, too many well-meaning philanthropists center their ideas and intentions instead of investing in getting the voices of those most impacted by climate change, air and water pollution, income inequality, and systemic racism into the rooms of power to speak for themselves.

Much of your advocacy work has focused on animal rights and environmental issues. What are two policies that you'd still love to see written into California legislation along these lines?

We urgently need to reduce single-use plastics. They cause harm from their very beginning (as petroleum-based products) to gumming up recycling infrastructure, piling up in landfills, and polluting our forests, rivers, and oceans. California voters — nearly two-thirds of whom consistently agree — will get to vote “yes” on a November 2022 ballot measure to reduce plastics packaging and foodware, fund improvements in reusable and refillable options for consumers, and pay to clean up our neighborhoods, coast, and waterways.

I’d also like to see California bring back beavers, amazing animals that bring enormous, urgently needed benefits to the state’s water challenges, habitats for endangered species, and climate change impacts. Nature’s engineers are native to California, but since the “fur rush” that preceded the race for gold nearly wiped them out, beavers have been treated as nuisance animals under California law and policy. I’m grateful to California scientists and beaver believers like Dr. Emily Fairfax who are making the case and communicating it to the public and decision makers.