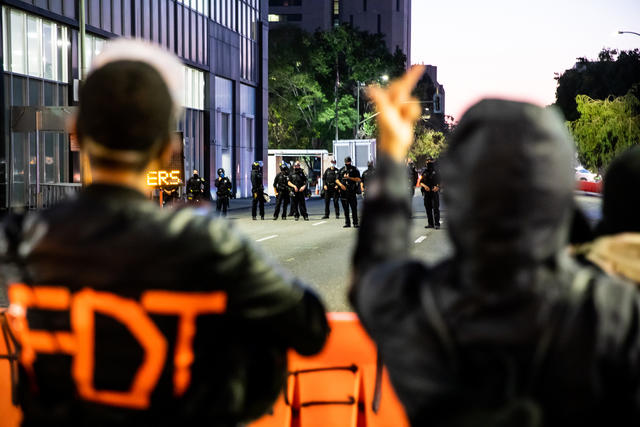 Protesters faced off with police in Oakland on Saturday.

Windows smashed at a federal building in Los Angeles. A courthouse set on fire in Oakland. A television news crew assaulted in Sacramento.

Over the weekend, a number of protests were held across California in a show of solidarity with demonstrators in Portland. In a familiar pattern, small groups broke away from what had been peaceful gatherings to engage in vandalism and battles with police. Oakland’s mayor complained that agitators were giving President Trump “the justification he seeks to send federal troops into American cities.” KABC | KPIX | Sacramento Bee

Gov. Gavin Newsom's lockdown allows worshippers to gather outdoors, as long as they wear masks and keep their distance from one another. But for some groups, even those restrictions are too much. Outdoor services in Huntington Beach and Fresno featured dense crowds, maskless faces, and calls for religious freedom. L.A. Times | Fresno Bee

Approved by voters in 1986, Proposition 65 was meant to help reduce consumers' exposure to harmful chemicals by forcing companies to put warning labels on their products. Instead, it's created mass confusion, as companies routinely attach warnings for any one of 900 chemicals. There has been one notable beneficiary of the law: a cottage industry of "bounty hunter" lawyers who file frivolous lawsuits against companies that can't afford to defend themselves. L.A. Times 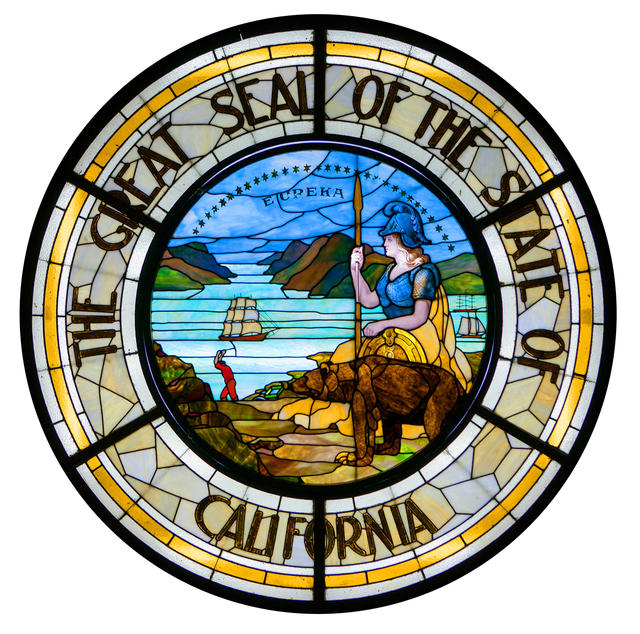 The Roman goddess Minerva is included because she was born fully grown, just as California joined the U.S. as a full-fledged state without having first been a territory. There's a grizzly bear, a prospector, and a bay with ships, all characteristic of California. And the state's official motto — "Eureka," or "I have found it" — is included in tribute to the history-bending discovery of gold. The great seal is stamped onto all California bills signed into law and also appears, ever so faintly, on every state driver's license. Capitol Museum | Pasadena Star-News 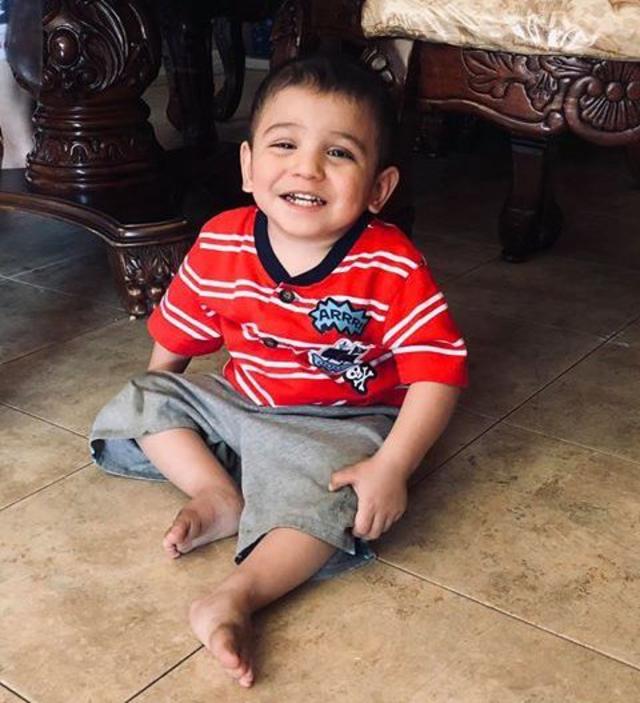 "I'm here before you to say that little Thaddeus will have some justice," Madera's police chief said.

Thaddeus Sran, a 2-year-old boy from Madera, was reported missing by his parents on July 15. The couple said they put him to bed one night and in the morning he was gone. Days later, investigators complained that the parents had become uncooperative. Then remains believed to belong to Thaddeus, who was nonverbal and couldn't walk, were found burned in a nearby almond orchard. The parents are now behind bars, charged with murder. KFSN | Fresno Bee

A Fresno artist is creating a giant mural of Thaddeus. 👉 KSEE

San Francisco officials had warned Catholic leaders to stop holding illegal indoor events. Yet in early July, nearly 100 guests secretly gathered for a wedding at Saints Peter & Paul Church. In the days that followed, the newlywed couple and at least eight attendees tested positive for the coronavirus. Guests flew back to Nashville, Arizona, and San Diego, potentially spreading the virus further. S.F. Chronicle

In early June, Stockton's mayor proposed requiring residents to wear masks. The response from the county's emergency services director: "Stay in your lane." Days later, the county allowed card rooms, hotels, and day camps to open. Today, the county is so overwhelmed by coronavirus cases that military medical teams have been dispatched to help two local hospitals. L.A. Times 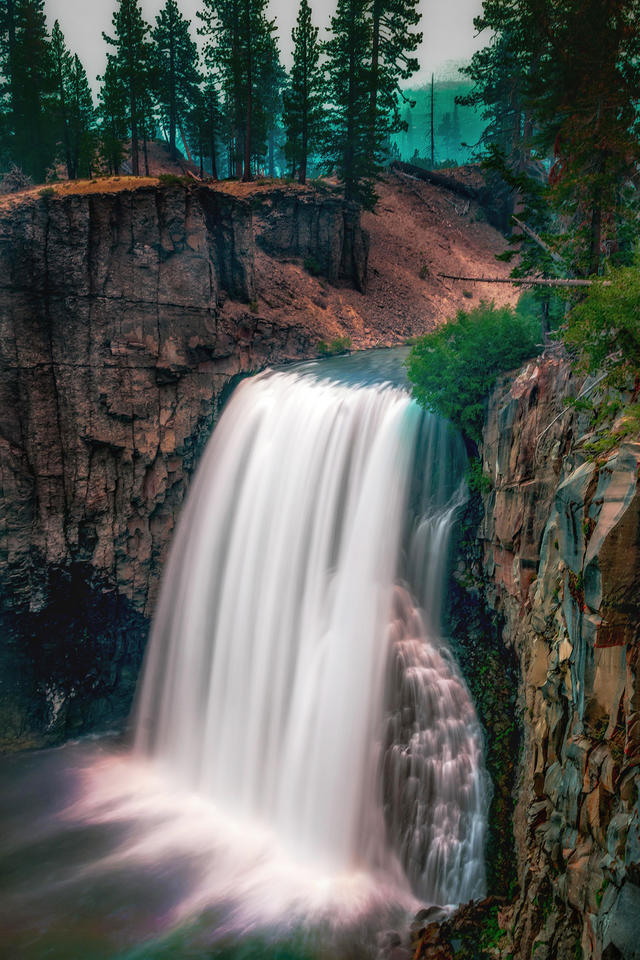 The marquee attraction at Devils Postpile National Monument is a group of oddly symmetrical basalt columns that resemble a giant pipe organ. But a short distance away, the waterfall is arguably the most majestic in the Eastern Sierra, plunging more than 100 feet along the middle fork of the San Joaquin River. Its name is derived from a propensity to churn out rainbows in the midday sun. hikespeak | California Through My Lens 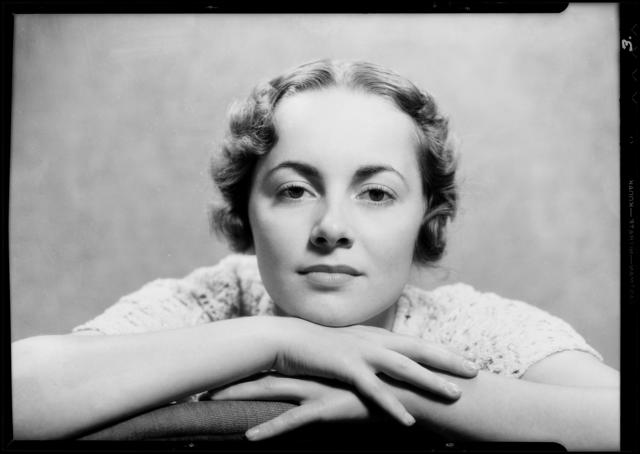 Olivia de Havilland died at 104. The "Gone With the Wind" actress and two-time Oscar winner was the epitome of Hollywood royalty during the industry's Golden Age. On-screen, she was known for her sincerity, beauty, and precise diction. Off-screen, she made headlines for winning a landmark court case that diluted the power of studios over actors, as well as an epic rivalry with her sister, the actress Joan Fontaine. De Havilland grew up in Saratoga and attended Los Gatos High School, where she joined the drama club. Five years after graduating, she was cast in "Gone With the Wind." N.Y. Times | Variety

De Havilland "helped destroy the indentured servitude that was the Hollywood studio contract system of the 1930s and ’40s." The Atlantic

Even before the coronavirus pandemic, California's inmates faced poor mental health care. At the women's prison in Chino, inmates now commonly spend 23 hours a day locked in their cells. Counselors, who inmates say are in short supply, hand out coloring books and brochures on anxiety. Four women have attempted suicide. Washington Post 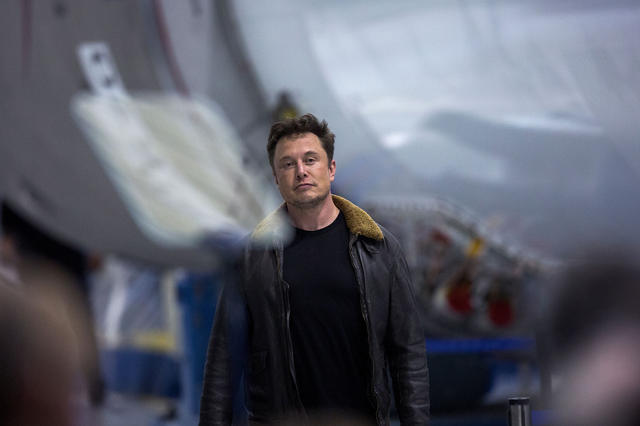 Elon Musk at the SpaceX headquarters in Hawthorne in 2018.

Elon Musk gave a revealing interview to Maureen Dowd from his home in Los Angeles.

On raising X Æ A-Xii: “Well, babies are just eating and pooping machines, you know? Right now there’s not much I can do.”

On time management: “I have lots of ideas, more ideas than I can act upon. I tend to bite off more than I can chew and then just sit there with chipmunk cheeks.”

On artificial intelligence: "We’re headed toward a situation where A.I. is vastly smarter than humans and I think that time frame is less than five years from now.” N.Y. Times

A brush fire on Sunday tore through more than 60 acres of the Bolsa Chica wetlands in Huntington Beach, a delicate ecosystem that is home to hundreds of bird species. Firefighters were able to contain the advancing blaze 100 yards from a row of multimillion-dollar homes. No structures were damaged. O.C. Register | KABC

Due to a data error at the S.F. Chronicle, Friday's newsletter misstated the number of coronavirus deaths in California on Thursday. It was 154, not 250.