Gov. Gavin Newsom on Thursday revealed his frustration with the failure of school administrators and teachers unions to agree on a plan to reopen schools. He was responding to a demand that all teachers be vaccinated first. “If we wait for the perfect," he said, "we might as well just pack it up and just be honest with folks that we’re not going to open for in-person instruction this school year.” Politico 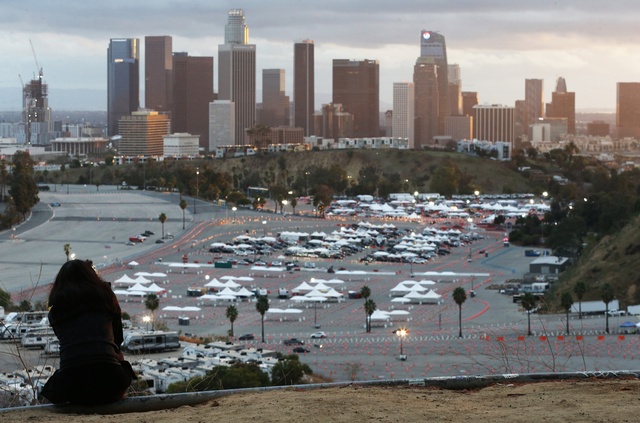 A person sat on a hillside as motorists lined up for vaccines at Dodger Stadium on Jan. 22.

People over the age of 65 have discovered that being eligible for the vaccine is not the same as getting the vaccine. Technology has been a major barrier, with overloaded sites and clunky online portals. Selda Hollander, 86, gave up. She sat in a standby line in Encino, shivering. “I can’t figure out if it’s worth it," she said. "I’m waiting for the vaccine, but I can get sick because of the weather.” L.A. Times

Despite the mishaps, L.A. has a higher vaccination rate than other cities and counties, with 83% of its allotted doses administered. The figure in New York: 74%. San Antonio’s Bexar County: 52%. Phoenix’s Maricopa County: 58%. N.Y. Times

The columnist Gustavo Arellano on how Southern California became the American epicenter of Covid-19: "One of the more obvious reasons is also one of the least highlighted: The coronavirus is as bad as it is here because it’s tailor-made to target those who work blue-collar jobs that are impossible to carry out at home, belong to deep social networks, and live in multigenerational households. Sounds like the Latino community, right?" The Atlantic

California's unemployment agency was warned about widespread bogus jobless claims, but did nothing to stop paying them for four months. A report by the state auditor found that the agency was flagging 1,000 suspicious claims per day, but had only two people reviewing the reports. In one case, it said, more than 1,700 claims came from a single address. The cost of the fraud to taxpayers: $10.4 billion and counting. A.P. | Sacramento Bee 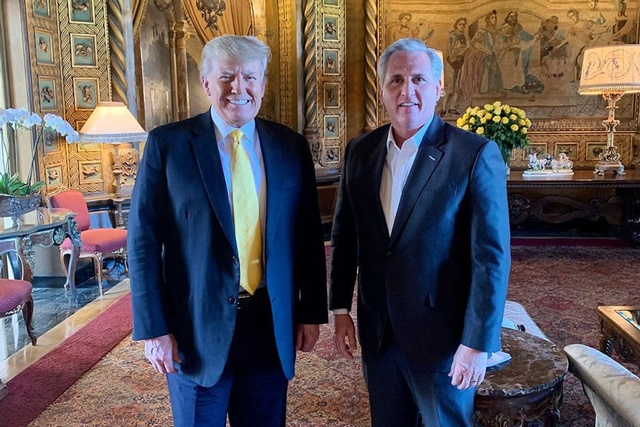 Kevin McCarthy, the House minority leader, met with Donald Trump in Palm Beach, Fla., on Thursday, as the Bakersfield Republican seeks to patch up his relationship with the former president. “I’m sure the president thought Kevin went too far," a Trump adviser told the Wall Street Journal, referring to McCarthy's criticism of Trump over the Jan. 6 attack at the Capitol. "In fact, I’m certain he did. Kevin asked for the meeting to make sure he’s in good shape.” Politico | N.Y. Times

In 2019, California passed a law allowing accusers of clergy sexual abuse to file lawsuits even if they were molested decades ago, threatening a surge of litigation that could cost the church billions. Now, California Roman Catholic bishops are asking a judge to throw out the law, calling it unconstitutional. An attorney for victims called the motions “morally reprehensible and hypocritical.” A.P. 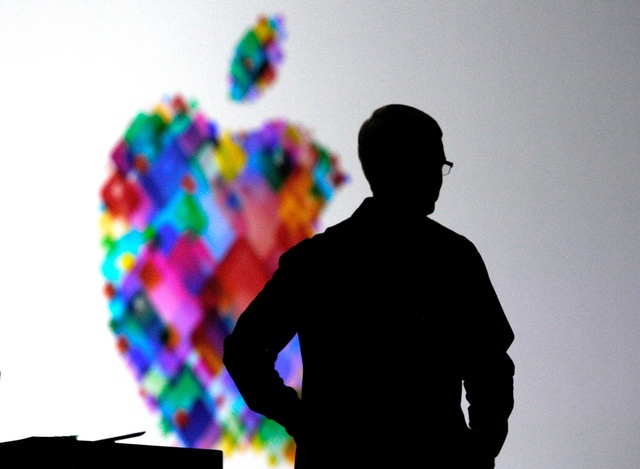 Two of Silicon Valley's largest tech companies appear to be on the verge of a legal war. Several publications reported Thursday that Facebook has been preparing an antitrust lawsuit over moves by Apple that would clamp down on data collection practices and thus cut into Facebook's ad business. Apple's CEO, Tim Cook, has made no secret of his distaste for business models that rely on "exploitation" of user data. "It deserves scorn," he said Thursday. N.Y. Times | NBC News 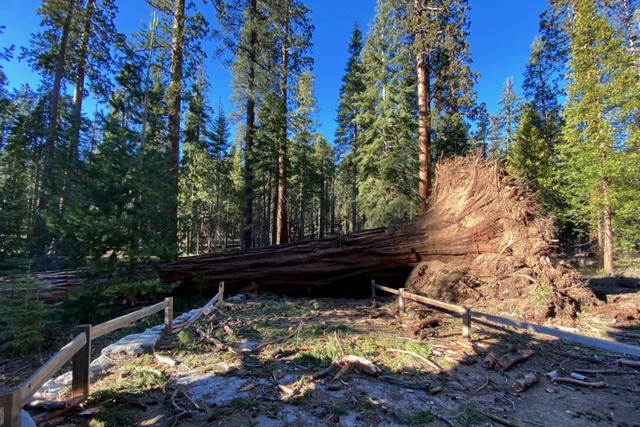 Yosemite National Park officials are getting a clearer picture of the awesome power of a wind storm that blew in from the east on Jan. 18. In Mariposa Grove, at least 15 giant sequoias came tumbling amid a “Mono wind event” that reached 100 mph. No famous trees fell, but the ones that did were massive. Along with damage to homes and cars, the storm caused perhaps the most damage measured in the park’s recorded history, a spokesman said. Mercury News | L.A. Times

Two Bay Area residents have sued Subway, alleging that its tuna sandwiches contain absolutely no tuna. According to the lawsuit, lab tests on samples taken from Subway locations in California found that the “tuna” is “a mixture of various concoctions that do not constitute tuna, yet have been blended together by defendants to imitate the appearance of tuna." Subway said the claims were without merit. Washington Post | S.F. Chronicle 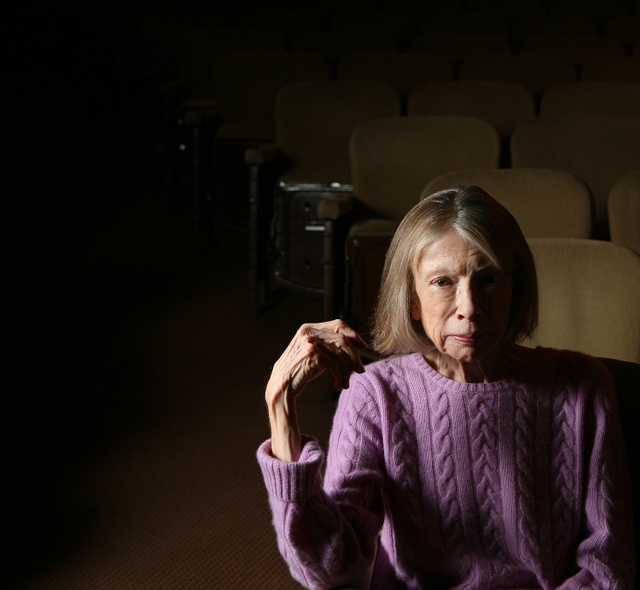 On this week's California Sun Podcast, host Jeff Schechtman shares a conversation he had with Joan Didion in 2016. She punctures the myth of "rugged individualism" in the California story. It was the federal government that built the railroad, the defense industry, and the infrastructure to irrigate the farms, she said. "Maybe the only truly entrepreneurial enterprise industry to grow up in California was high tech. That had a different feel to it. But it was totally uncharacteristic of California." 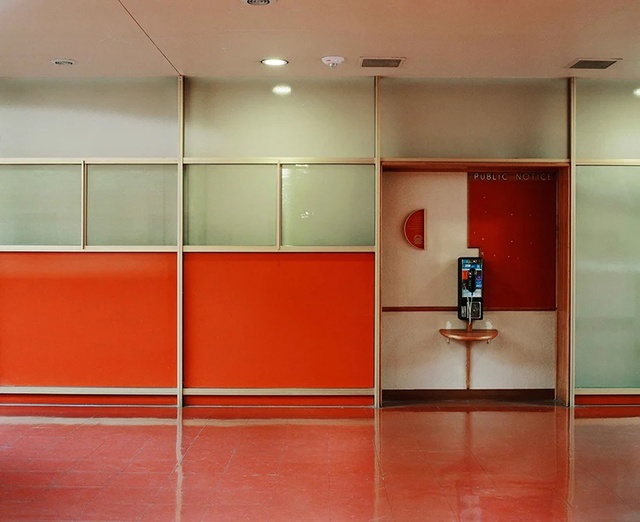 A phone booth in the Marin County Civic Center.