Good morning. It's Tuesday, May 4. 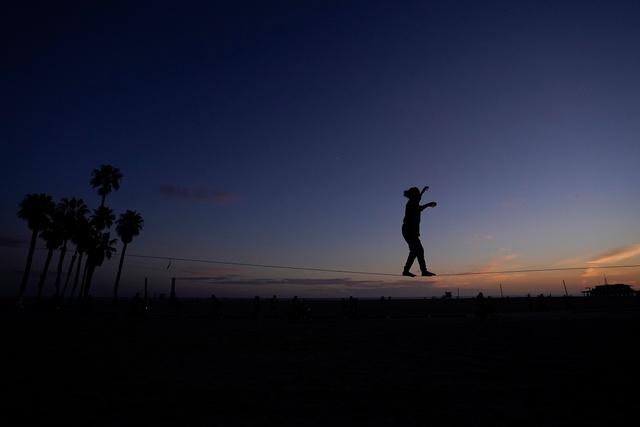 Christopher Hutchinson, 33, balanced on a slack line in Santa Monica on April 7.

Zero Covid-19 deaths in L.A. County on Sunday and Monday.

A single hospitalization in Napa County.

An exception: Humboldt County. A health official blamed an uptick in cases on the same coronavirus variant troubling the Northwest. S.F. Chronicle 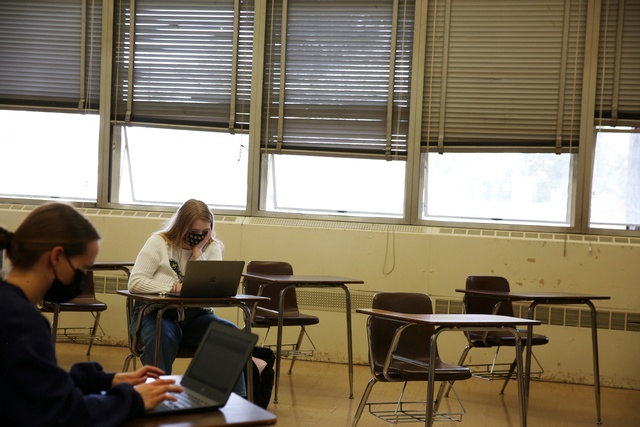 In San Francisco and Los Angeles, tens of thousands of middle- and high-school students have returned to classrooms in which they sit at desks and learn remotely while an adult supervises them. While rare nationally, the “Zoom in a Room” format has been embraced in the cities even as California's coronavirus case rate has plunged lower than any other state. In many cases, adolescents are opting to stay home. Wall Street Journal

California parents owe $18.4 billion in overdue child support payments. But a large portion of that sum — $6.8 billion — is owed not to children, but to the government, which charges interest on past-due payments. No other state takes a higher percentage of payments. Critics say California is drowning low-income parents in debt at the expense of the children it’s supposed to be looking out for. CalMatters

A CalMatters reporter drew a striking comparison with how politicians who fail to pay fines are treated. @LaurelRosenhall

The "recall circus" metaphor could be coming to life.

John Cox, a businessman from Rancho Santa Fe who is running for governor, told reporters that he planned to bring a special guest on his campaign tour: "a 1,000 pound live bear." The Republican, who also ran for governor in 2018 and lost by double digits, plans to stop at Napa Valley's French Laundry restaurant, where Gov. Gavin Newsom dined with friends during the state's lockdown. He changed his social media handles to @BeastJohnCox. San Joaquin Valley Sun | KTXL 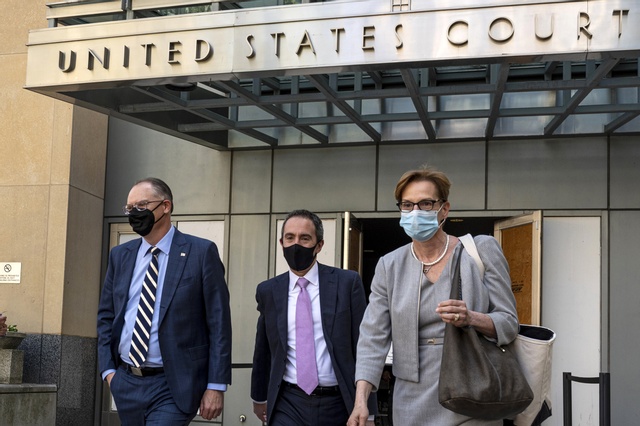 Last summer, Epic Games, the maker of Fortnite, told gamers on iPhones that they would get a discount if they completed purchases outside of Apple's payment system. Apple responded by ousting Fortnite from its app. That set up a court battle that kicked off Monday in an Oakland courtroom and could have far-reaching implications for the iPhone maker’s business model and U.S. antitrust law. Tim Cook, the Apple chief, is scheduled to testify. N.Y. Times | A.P.

In 1996, Tien Pham came to San Jose at age 13 as a refugee from Vietnam. He got involved with street gangs and was accused of stabbing someone during a fight. At age 17, he got 28 years in prison. His family waited at the gates on the day in August that he was to be released, but Pham never emerged. Transferred into ICE custody, he was flown in March to Vietnam, a country now unfamiliar to him. “America is my home," he said from Ho Chi Minh City. "My family, my loved ones, my friends, they are all there." The Guardian 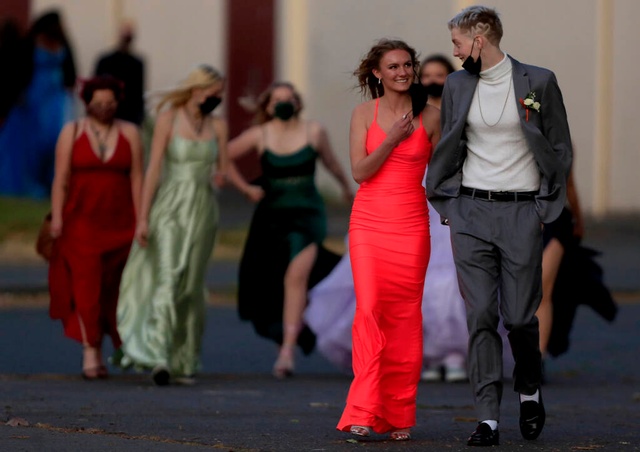 Students walked to their prom on the school football field in Santa Rosa on Saturday.

Santa Rosa High School held its prom on its football field Saturday. Teenagers dressed in colorful gowns, smart suits, and face masks danced to music piped in through headphones to avoid disturbing the neighborhood, making the best of a ritual of American youth in a time of pandemic. The photographer Kent Porter got some nice pictures. Press Democrat

The main branch of the San Francisco Public Library opened its doors to the public for first time in more than a year. As people spilled through into the lobby, they pumped their fists and a cheer arose. The reporter Peter Hartlaub caught the heartwarming moment on video. @peterhartlaub

The S.F. Chronicle: "The S.F. Library reopened. Here's wisdom and hope from the first man in line."

Feather River Canyon is one of America's great destinations for train watching. Carved along a narrow gorge in the Northern Sierra in 1909, the rail line navigates a gantlet of obstacles, weaving above and below bridges, performing a full 360-degree loop, and passing through the magnificent Keddie Wye, in which two elevated tracks merge in a tunnel. While the Feather River Route hasn't seen regular passenger travel since 1970, motorists can see several freight trains rumble the tracks daily along a scenic byway that shares the canyon.

Here's a fantastic "drone chase" of a train along Feather Canyon. 👉 YouTube (8:45 mins)

The Biden administration approved a massive solar energy project in the Southern California desert. The $550 million Crimson Solar Project will be sited on 3 square miles of public lands just west of Blythe, with the potential to supply enough power for 87,500 homes, the Interior Department said. Some conservationists have said the project will disturb too much pristine desert. Reuters | A.P. 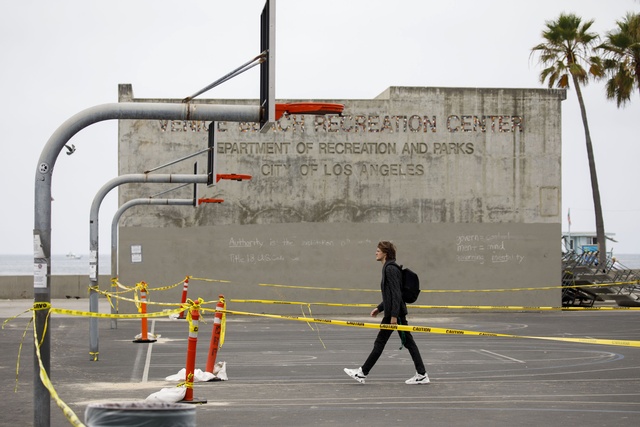 The basketball courts at Venice Beach have been closed for a year.

At Venice Beach, park officials are still refusing to remove locks from the basketball hoops that keep people from playing. Local players say it's maddening. At one point, someone tried to remove the locks, only to be detained and fined. "Every sport, every restaurant, even the Staples Center is open," a Venice basketball league founder said. "It's ridiculous.” KCRW 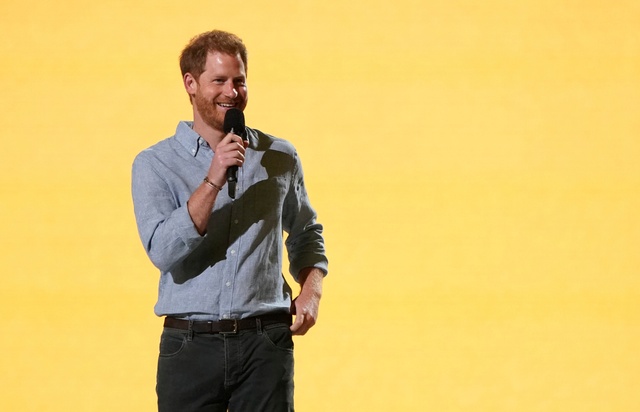 Prince Harry spoke at a charity concert at SoFi Stadium in Inglewood on Sunday.

Prince Harry got the rock-star treatment Sunday night at a star-studded benefit concert in Southern California: “Vax Live: The Concert to Reunite the World.” He and Meghan, denizens of Montecito, have been reinventing themselves as typical American mega-celebrities, the Washington Post wrote — the kind who dabble in content, philanthropy, technology, and a tasteful dash of politics. "They weren't just interviewed by Oprah. They want to be Oprah."