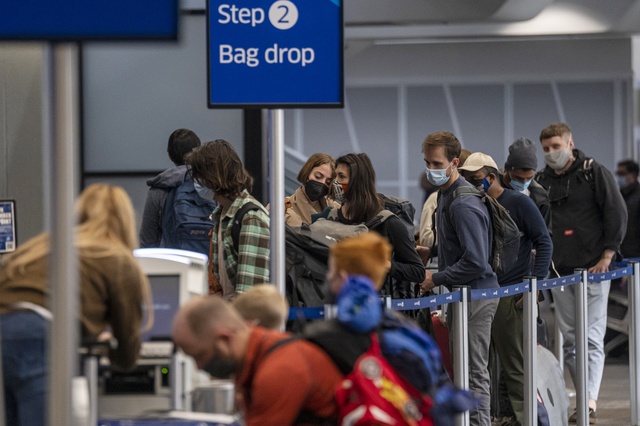 The first known case of the Omicron variant in the U.S. was identified Wednesday in a San Francisco resident who returned from South Africa on Nov. 22. Health and political leaders expressed confidence that the arrival of the new strain did not presage the reimposition of lockdowns. “There’s more panic than information around this variant,” Gov. Gavin Newsom said. “Doubling down on what we’re doing is the most important message." The infected person, identified only as between ages 18 and 49, was vaccinated and had only mild symptoms, officials said. The person is in isolation, and aggressive contact tracing was underway. S.F. Chronicle | N.Y. Times

See a map tracking the spread of Omicron. 👉 N.Y. Times

Each year, water agencies across the state request a share of supplies from California's network of canals and reservoirs known as the State Water Project. On Wednesday, officials announced how much everyone would be getting to start 2022: nothing. The unprecedented curtailment, forced by unrelenting drought, means municipalities from the Bay Area to San Diego — including 1,200 square miles of farmland — will have to rely on alternative water sources. Mandatory cuts seemed all but certain. A.P. | Bloomberg

Vice President Kamala Harris is facing an exodus of staffers. The latest departure is by Symone Sanders, a senior adviser and chief spokesperson who confirmed on Wednesday that she is planning to leave the White House at the end of the year. Harris’ communications chief, Ashley Etienne, announced her exit in November. Two additional staffers have told colleagues they also plan to leave. Harris has battled claims of staff dysfunction in her office. Washington Post | Politico

California, it's often noted, is big.

At 163,695 square miles, it's bigger than the 12 smallest U.S. states combined. If it were a country, California would be bigger than most, ranking 59th out of 195. But to get a sense of what that means, the website True Size has a fascinating tool that lets you compare geographic regions while correcting the size distortions common when projecting a round Earth on a flat map. A few comparisons. 👇 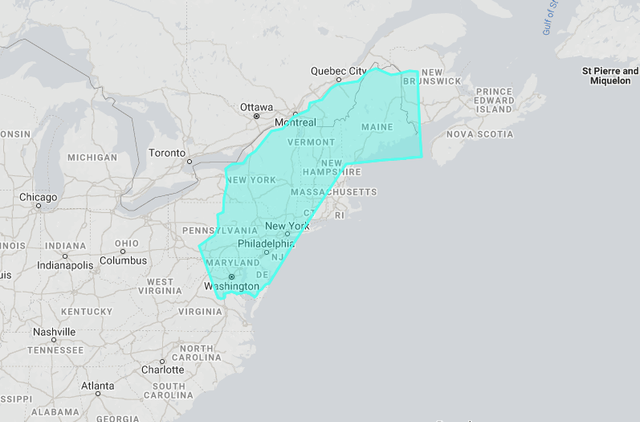 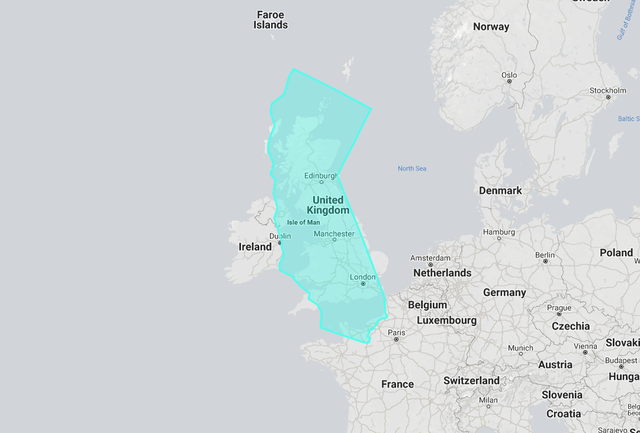 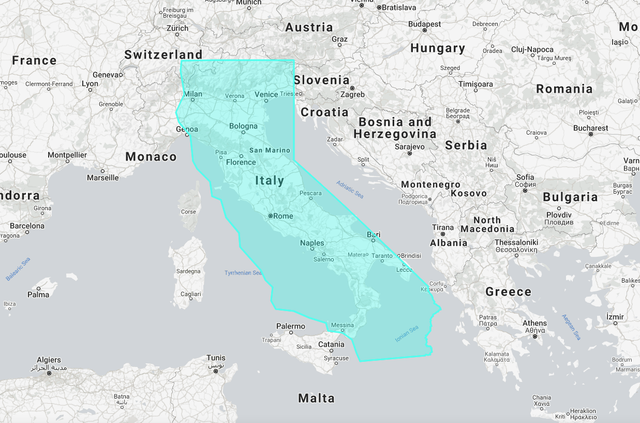 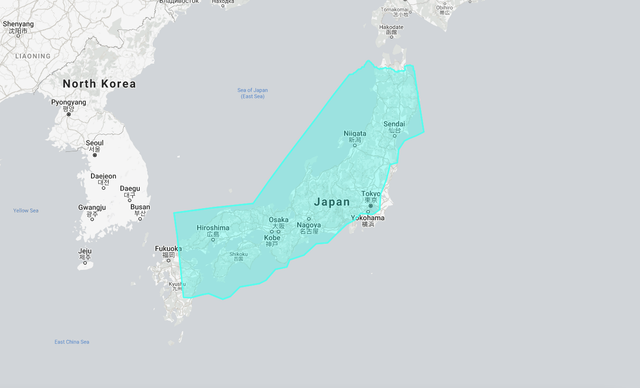 In 2018, a string of motorists came forward with accounts of illegal stops and seizures by Rohnert Park police officers along a major marijuana transportation corridor of Highway 101. On Wednesday, former Rohnert Park police officer Brendan Tatum pleaded guilty in a San Francisco courtroom to federal charges of conspiracy to commit extortion, among other charges. Facing prison, he apologized through his lawyer for "huge mistakes." KQED | NBC Bay Area 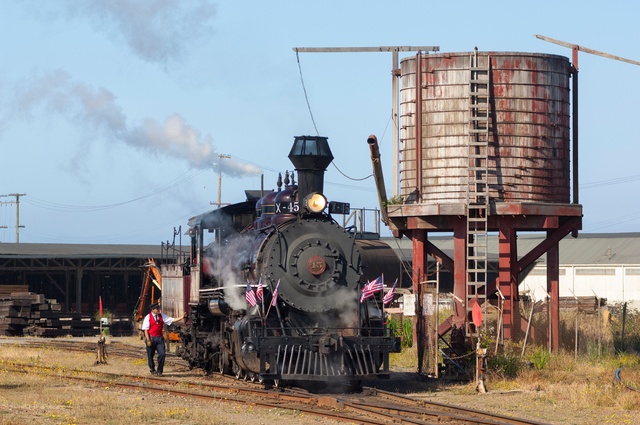 The Skunk Train runs from its headquarters in Fort Bragg.

Long ago in Mendocino County, the Skunk Train transported lumber. But it has operated as a heritage line for decades, carrying tourists along a scenic route through the redwoods. Yet Mendocino Railway, the Skunk Train owner, just claimed eminent domain rights as a public utility to acquire the west side of Fort Bragg, setting off a furious reaction from town leaders. “It is a land grab,” said Vice Mayor Jessica Morsell-Haye. “There’s no other name for it. They now own 20% of this damn town.” SFGate.com | Press Democrat 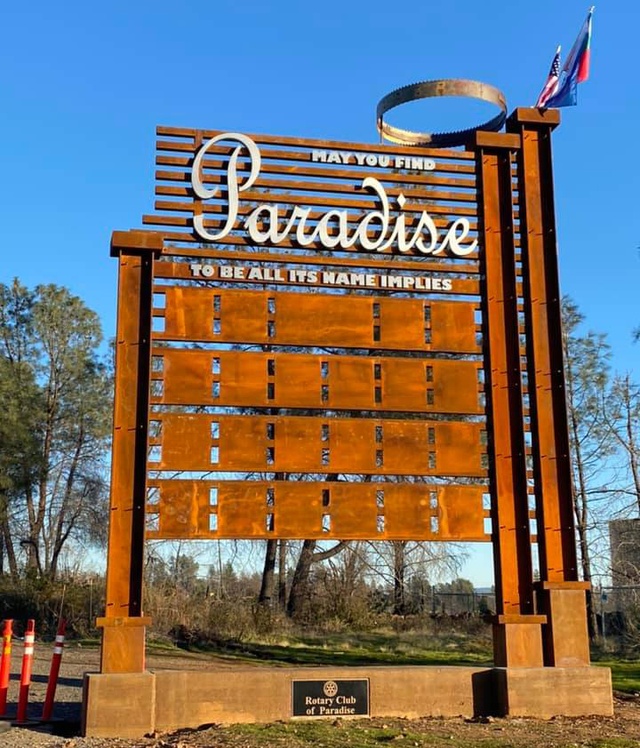 Paradise has a new sign welcoming visitors to town.

Paradise just put up a new welcome sign three years after the Camp fire all but destroyed the foothills community. "May you find Paradise to be all its name implies," it reads, just as the original sign did. Before the 2018 inferno, Paradise had a population of roughly 26,000. It now hovers around 6,000 residents, living among empty lots, debris piles, and rebuilt homes. “It doesn't really undo all the trauma, but it's great,” Brian Halberson, a resident, said of the sign. Action News Now | KRCR 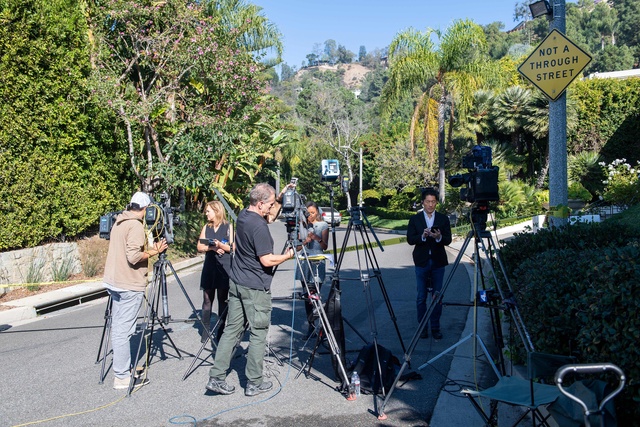 Reporters gathered at the home of Jacqueline Avant in Beverly Hills on Wednesday.

Jacqueline Avant, a philanthropist and the wife of famed music producer Clarence Avant, was fatally shot in her Beverly Hills home early Wednesday, the authorities said. The Beverly Hills police chief said he did not think it was a “random attack,” but neither a suspect description nor motive was yet known. The death of Avant, 81, prompted an outpouring from prominent figures, including Magic Johnson, who said he and his wife were devastated. “This is the saddest day in our lives,” he wrote. L.A. Times | A.P.

On Monday, Los Angeles began enforcing a rule that patrons show proof of vaccination before entering restaurants. On Tuesday, a reporter visited five In-N-Out locations across the city — but was never asked for his vaccine card. The burger chain became embroiled in the Covid-19 wars in October when it lashed out against San Francisco's vaccine rules, declaring, “We refuse to become the vaccination police for any government.” It closed indoor dining at several restaurants rather than comply. CBSLA 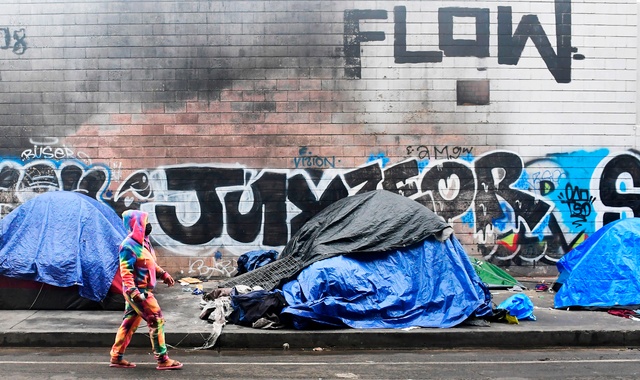 A woman walked by tents lining a street in Los Angeles on Feb. 1.

In a new poll of Los Angeles County voters, four in 10 said that homeless people in their neighborhood made them feel significantly unsafe. Homelessness topped voters' list of the most serious problems in the country, beating housing affordability, traffic, and climate change: "Asked to describe their concerns in their own words, voters repeatedly mentioned urine and feces in the streets, a rising sense of disorder, and concern for their children." L.A. Times

Planned Parenthood Los Angeles said on Wednesday that hackers accessed the personal information of roughly 400,000 of its patients in October. The reproductive healthcare provider said the stolen data included names, addresses, and clinical information, such as diagnoses and prescriptions. A motive was unknown, but Planned Parenthood has been targeted in politically motivated cyberattacks in the past. Washington Post | L.A. Times 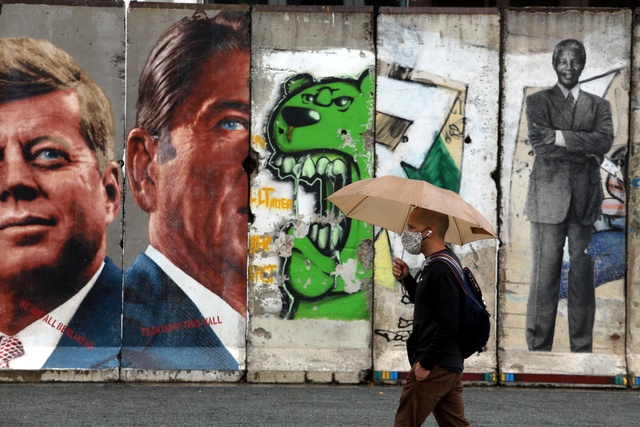 The largest remnant of the Berlin Wall outside Germany stands along a road in Los Angeles, pictured above.

Known as the Wall allong Wilshire, the 10 barricade segments were brought to Los Angeles in 2009 to commemorate the 20th anniversary of the wall's collapse. They were unveiled facing the street with both original graffiti and new artwork, including portraits of Ronald Reagan and John F. Kennedy. A couple years later, artists were invited to also paint the backside of the slabs — the deadly “East Berlin side” — which had remained untouched by graffiti. One artwork is ripe for interpretation: a skeletal Captain America bursting though the wall against a backdrop of fast food restaurants. MyModernMet.com | Wende Museum