Sen. Kamala Harris enjoyed a surge of support after her breakout debate performance last month. Yet somehow Pete Buttigieg, the small-town Indiana mayor, outraised her in her own state in the second quarter. Going by the money race, Democratic California is Harris-and-Buttigieg country. And President Trump? He's collected more than both candidates combined. CALmatters has some nice visualizations of the numbers. CALmatters | L.A. Times 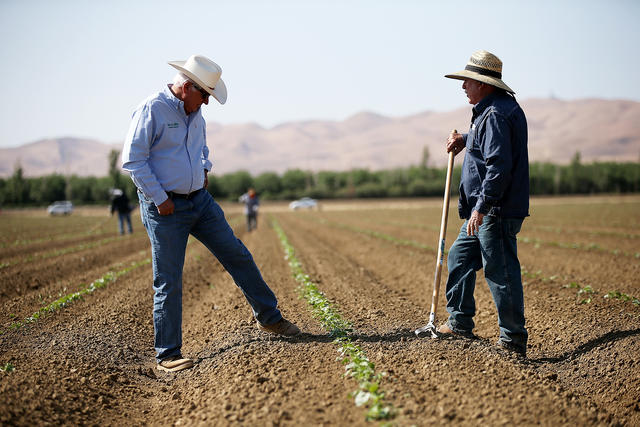 Farmers in California's conservative-leaning Central Valley often resist talk of climate change, but they are no less anxious about choosing crops that can thrive over the next quarter century. "Everyone," a nursery operator said, "is thinking about the impacts of warm winters and not enough water." Bay Nature

Potentially deadly valley fever is on the rise, caused by a fungus that thrives in dry, undisturbed soil. NBC News

California counties and cities sued paint-makers in 2000, hoping they'd pay billions to remove dangerous old lead paint from hundreds of thousands of homes. A settlement has finally been reached, though for a much smaller sum: $305 million. In the decades it took to prevail, tens of thousands more kids have been poisoned. In Alameda County, for example, some ZIP codes have lead poisoning rates higher than those found in Flint, Michigan, at the peak of that city's water contamination crisis. Reuters | A.P. 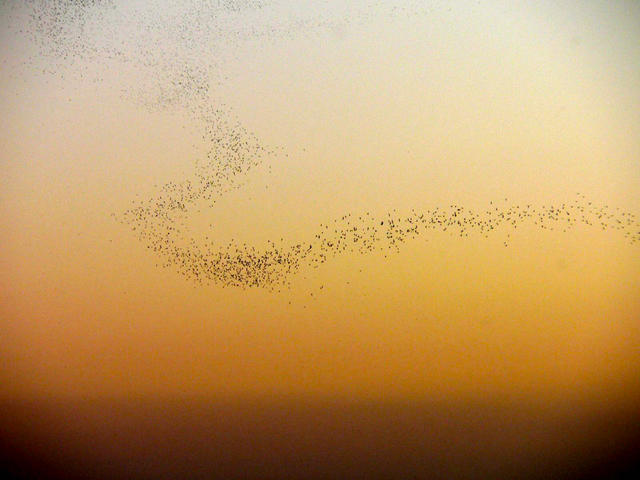 Every summer evening, a ribbon of black loops out from the underside of a Northern California bridge and into the soft light of sunset. It's the dance of the Mexican free-tailed bat. A colony numbering about a quarter million has lived in the warm crevices below the Yolo Causeway outside Sacramento since the 1970s. Voracious eaters, they gulp down millions of insects every night. The Sacramento Bee has a nice video: "They're just all around us," a bat expert said, "and because they fly at night we often don't notice them at all." Sacramento Bee | Atlas Obscura

A similar nightly spectacle unfolds from under a bridge in Riverside County. SoCal Wild 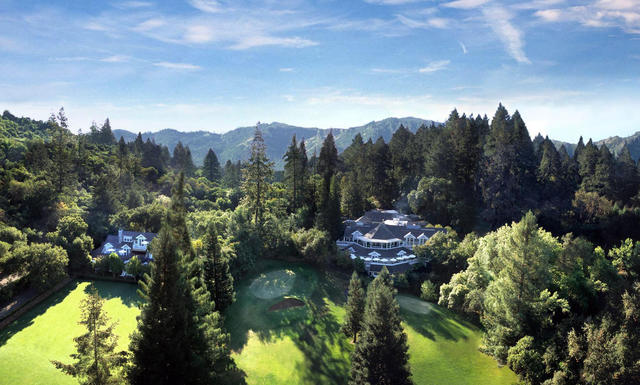 Travel+Leisure named the world's 100 best hotels based on a survey of readers across categories including facilities, food, and overall value. Three California properties made the cut: Post Ranch Inn in Big Sur, North Block Hotel in Yountville, and Meadowood Napa Valley in St. Helena, pictured above. Travel+Leisure

Oakland's City Council voted unanimously to ban facial recognition software by city agencies. Oakland is now poised to become the third city in the nation to pass such legislation — along with San Francisco and Somerville, Massachusetts — but it could get more company soon. Berkeley is weighing a measure, and a bill in Sacramento would create a moratorium on facial recognition for police body cams statewide. KQED | The Verge 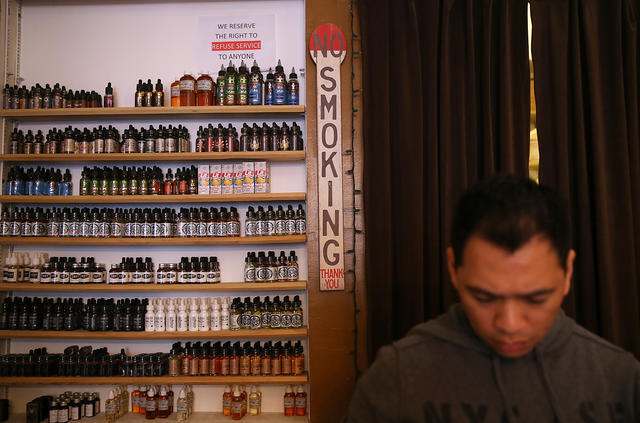 In 2016, San Francisco voted in favor of recreational cannabis by a wide margin. The county's supervisors later backed safe injection sites for drug users. So why is the city banning the sales of e-cigarettes? That's what vape store owners are asking: "We have no future," one said. "We play by the rules, and they change the rules in the middle of the game." City Lab

Juul, the San Francisco vaping company, has a shot at overturning the e-cigarette ban with a ballot initiative in November. S.F. Chronicle | CBS SF 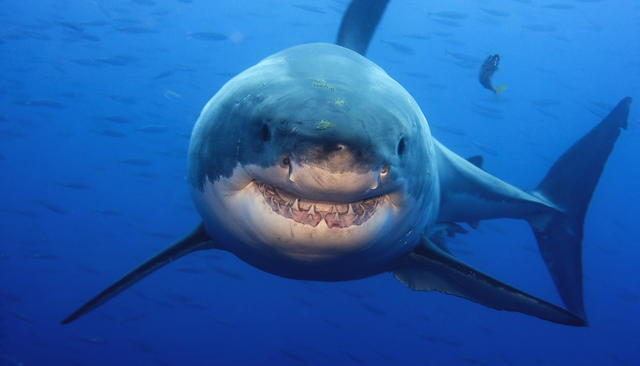 Great white sharks in the waters around Monterey Bay have become so abundant that locals have taken to calling it "shark park." A TV crew went up in a helicopter and spotted more than a dozen of the 15-foot long killers in about 10 minutes. KPIX | SFGate.com

"Everyone was in shock": A group of fishermen hooked a great white in the San Francisco Bay and it jerked their boat around for 30 minutes and two miles. NBC Bay Area | SFGate.com

A Fresno school district trustee has managed to shift attention away from a blackface incident involving a student to questions about his own behavior.

Here, according to reports, is what happened:

In 1970, 1 in 7 San Francisco residents was black. Today, it's about one in 20. A data scientist created a series of visualizations of the Bay Area that depicts the racial proportions of each census block based on data from the 2017 American Community Survey. "In the white sea of the Bay Area," he wrote, "there is an Asian continent, a few small Hispanic islands, and a buoy of African Americans." The San Franciscan

Here's an incredible map that shows every person in the U.S. mapped, by race, based on the 2010 census. University of Virginia 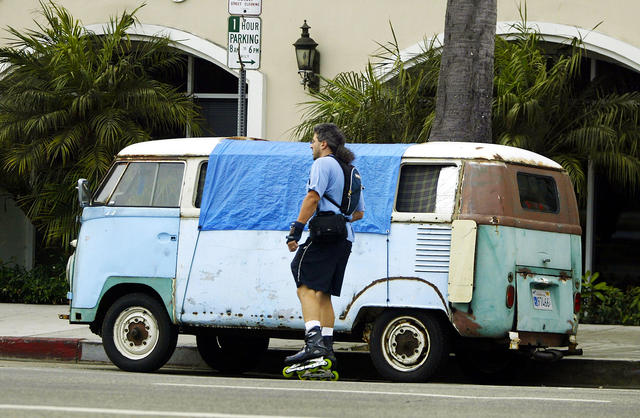 A van serves as a home in Venice.

Sign of the times: A man living in his van in Venice is earning income by renting out 14 other vans to homeless people for $300 a month. Call him the vanlord. Local homelessness experts said the business was unprecedented but unsurprising in an area with a median rent of about $2,500. Santa Monica Daily Press

Los Angeles police have been instructed to stop issuing citations to people sleeping in vehicles after an ordinance barring the practice expired. City News Service 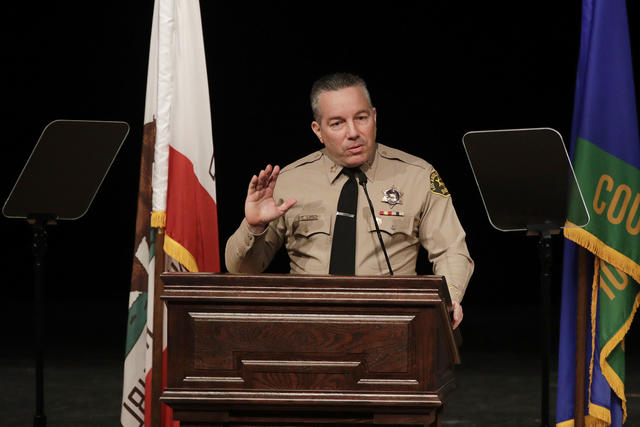 Sheriff Alex Villanueva was said to make it his “No. 1 priority” to reinstate Caren Carl Mandoyan.

Sheriff Alex Villanueva courted criticism from watchdogs when he reinstated a deputy accused of domestic abuse and stalking. Now it turns out that the decision raised alarm within the department as well. A top official resigned after 34 years rather than carry out what she said was a "highly unethical" and "unheard of" directive to rehire the former deputy, Caren Carl Mandoyan. L.A. Times

Disney punched back against criticism of the company's pay practices by Walt Disney's grandniece Abigail Disney. Her account, the company said, is "a gross and unfair exaggeration," adding that it is "an insult to the thousands of employees who are part of the Disney community."

Abigail Disney has called C.E.O. Bob Iger’s $65.6 million compensation package "insane." In a survey, many Disney workers said they struggle to pay for food and medical expenses. One in 10 said they experienced homelessness. N.Y. Times | Bloomberg 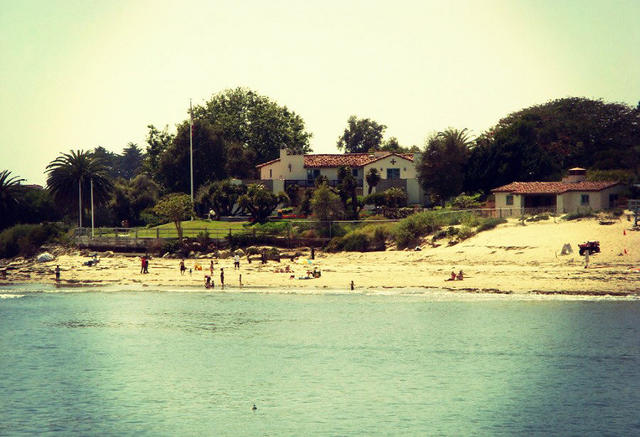 Malibu's Adamson House was built in the Mediterranean revival style.

A century ago, Malibu was one family's personal playground. The heiress of the Spanish land grant that included Malibu grew up hiking, horseback riding, and boating. She later married the ranch foreman and built a Spanish-style mansion by the sea that would become regarded as one of California's most exquisite homes.

Over time, the family was forced to relinquish more and more of their land. The state bought the Adamson House with plans to level it and build a huge parking lot. The home was saved only after a decade-long fight by preservationists. "Today," wrote Curbed Los Angeles, "it is part of the Malibu Lagoon State Beach, and is open for tours, a permanent monument to the family that discovered the beauty of Malibu, and for a time kept the magic all to themselves." Curbed Los Angeles 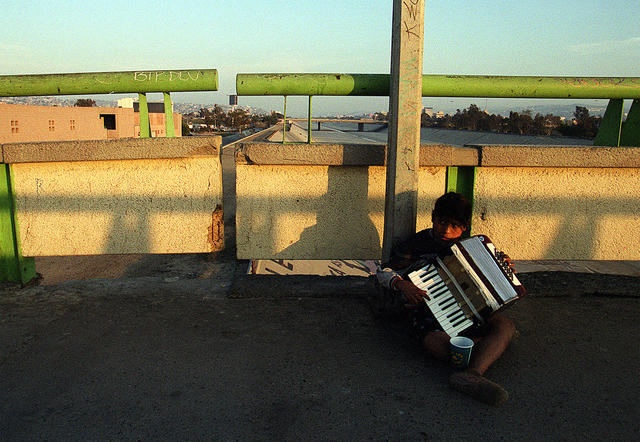 Maricela Garcia, 9, played an accordion on the bridge at the U.S.-Mexico border.

In the early 1990s, Southern California authorities dumped thousands of immigrant orphans into Tijuana. Waves of Mexican children had streamed across the border into California, many in flight from abuse and poverty, creating a small army of street children that took root under freeways and in parking lots.

Many resorted to stealing, peddling drugs, and huffing gasoline additives. Historian Kevin Starr gave an account in his book "Coast of Dreams": "Malnourished, violently treated or sexually abused or both, unschooled, addicted to drugs, soon to join the more than five thousand homeless children roaming the streets of Tijuana — here were the truly wretched of the earth."

Citing a lack of resources, the counties of Los Angeles, Orange, and San Diego summarily sent thousands of the kids back to Mexico. Some, usually minor offenders, were deposited directly into the Tijuana jail. A Los Angeles advocate for migrant children who visited the jail found the conditions appalling. "They have no humanity," she told the L.A. Times in 1991.

An opinion column in the L.A. Times offered another concern: "It seems inappropriate and unwise for a county government to be, in effect, carrying out its own foreign policy. The deportation of people from this country is properly the province of the federal government." Timeline | L.A. Times (1991)

I wanted to check in with you on a potential change to the newsletter. Here's the idea: I'd move to 12 items a day, instead of 15, and introduce a Sunday edition of the newsletter that includes mostly long reads.

Anyhow, I'd love to hear your thoughts if you have any: mike@californiasun.co.