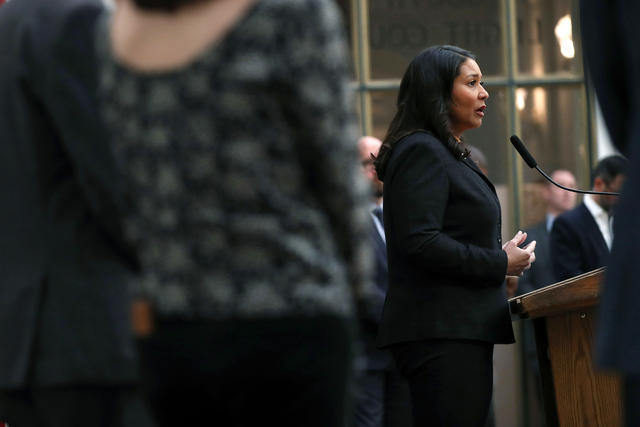 The measures get more extreme by the day, and the latest is a massive "shelter-in-place" mandate by seven counties across the greater Bay Area. The unprecedented move directs most businesses to close and orders 7 million residents to stay inside, venturing out only to meet basic needs such as food and medicine. It's in effect now until April 7. "This is our generation's great test, our moment to stand tougher as a community," said San Jose Mayor Sam Liccardo. Mercury News | S.F. Chronicle | A.P.

The question on many others' minds is who's next? Sacramento is discussing a shelter-in-place order. So is Sonoma County. Los Angeles and San Diego are following a pattern of escalating restrictions. Sacramento Bee

The legislation was passed under surreal circumstances. Several lawmakers above the age of 65 were absent as they followed orders to isolate. After the vote, lawmakers adjourned and headed home for a month — or possibly longer. Sacramento Bee | CalMatters 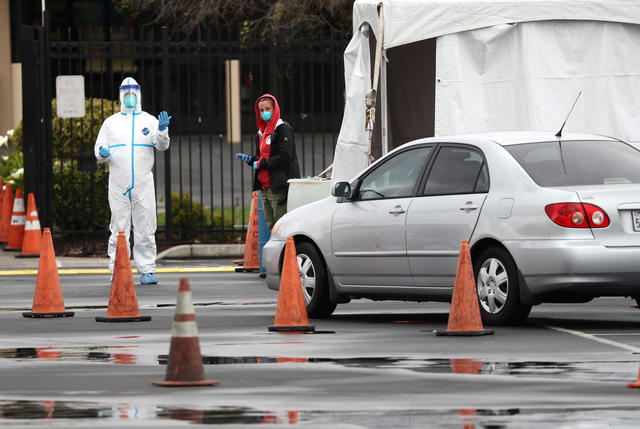 A medical worker guided a car at a drive-thru test clinic in San Mateo on Monday.

Several coronavirus deaths were announced Monday, among them two patients in Santa Clara County, two others in Riverside County, and a substitute teacher in Sacramento. Here are latest numbers, according to the S.F. Chronicle and N.Y. Times.

The Los Angeles County Sheriff's Department has been releasing hundreds of inmates from its jails to protect those housed in close quarters from infection. Deputies, meanwhile, have been directed to cite and release people whenever possible, instead of arresting them. "Our population within our jail is a vulnerable population just by virtue of who they are and where they're located," Sheriff Alex Villanueva said. L.A. Times | NBC News

San Diego's sheriff's department has moved to do the same. S.D. Union-Tribune 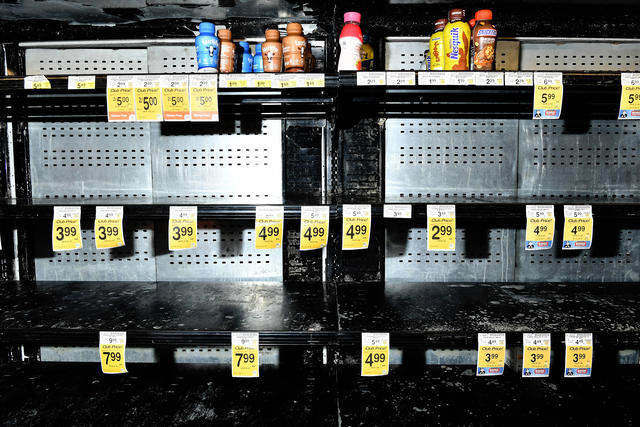 Empty shelves at a Vons in Burbank. Grocery stories have been crushed by panic-buying.

Layoffs are mounting across the state. But some companies are desperate for workers. Raley's, a Northern California grocery chain, and Safeway both announced massive hiring pushes at stores across the West as they struggle to meet surging demand. Amazon, which operates numerous warehouses in California, said it would also hire thousands of new workers. S.F. Chronicle | Sacramento Bee

As the U.S. veers toward a recession, a UCLA analysis projected that California would take the heaviest hit — more than 280,000 payroll jobs lost by early 2021. Times of San Diego | San Gabriel Valley Tribune

The pandemic is adding urgency to California's homeless crisis. Gov. Gavin Newsom said the state would marshal a massive effort to move people off the streets and into hotels and motels purchased by the government. Further, 450 state-owned trailers were to be deployed as temporary housing to locations around California. L.A. Times | Sacramento Bee 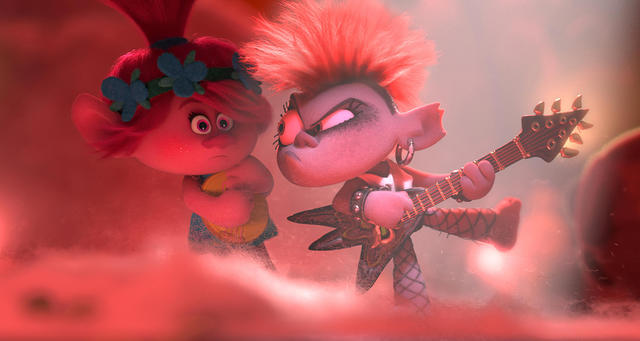 "Trolls World Tour" was to be released on-demand on the same day as its global theatrical release.

With people unable to go to the movie theater, Universal announced that it would make its films available in homes on the same day as their global theatrical releases. That goes for movies currently out too, including the Elisabeth Moss horror film "The Invisible Man." Set for release on April 10: "Trolls World Tour." L.A. Times | Hollywood Reporter

A couple other ways to manage your self-isolation:

Weeks after a group of homeless mothers successfully took over a vacant property in Oakland, another group of moms is trying to do the same thing in Los Angeles. The squatters say they were forced to act by the lack of affordable housing and the threat of the novel coronavirus. "I am a mother of two daughters," said Martha Escudero, 42. "I need a home." L.A. Times | Curbed Los Angeles

"I knew for sure I'm never going to own a home. So I talked to my girlfriend, and that was our defining moment. I said: 'I want to buy a house and start a life. Will you move with me?'" So many Californians are starting new lives in Arizona that it's changing the political hue of the state. Once solidly conservative, it's now more purple. N.Y. Times

Here's a parable on the squeezing of San Francisco's creative class. George Rocha creates furniture from old skateboards. He became a fixture of the city's skating culture. But he just can't afford to stay any longer. S.F. Chronicle 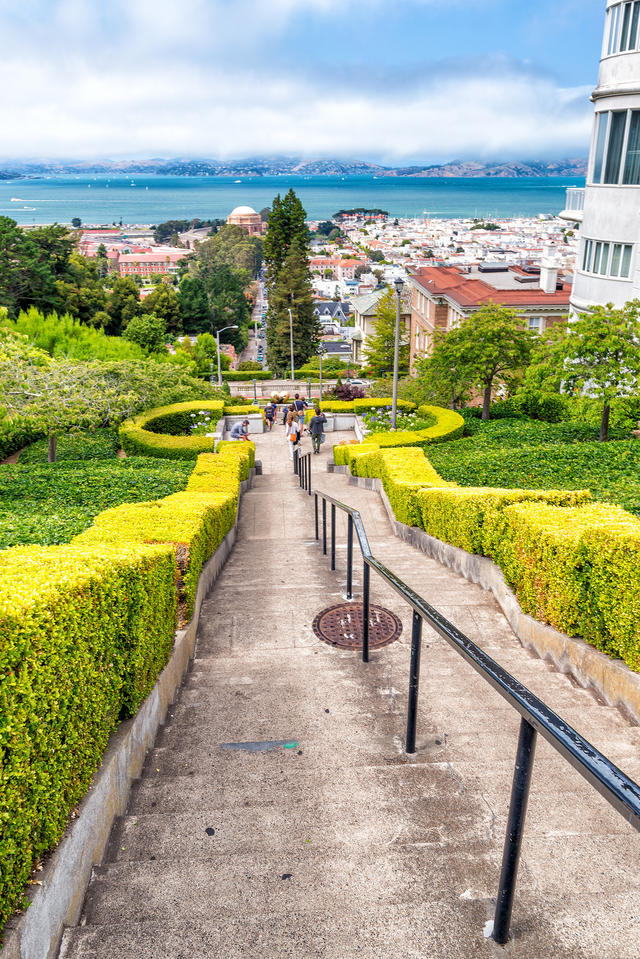 Grabbing fresh air is allowed, even encouraged, under San Francisco's shelter-in-place order. Pictured above is the city's Lyon Street stairs, a place hiddenSF called "one of the most wonderful places in all of wonderful San Francisco, indeed in all of the world." Getting to the top requires hoofing it up eight flights of steps, but the reward is eye-popping views of the bay and the Palace of Fine Arts. Curbed included Lyon Street in its list of 15 perfect San Francisco strolls. Curbed San Francisco 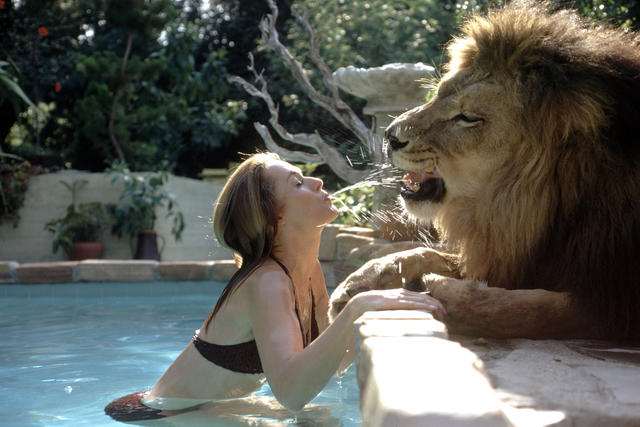 The actress Tippi Hedren used to live with a 400-pound lion at her home in Sherman Oaks. The star from Alfred Hitchcock's "The Birds" welcomed the remorseless killer into her home as part of research for a movie. She later acknowledged it was "stupid beyond belief." LIFE 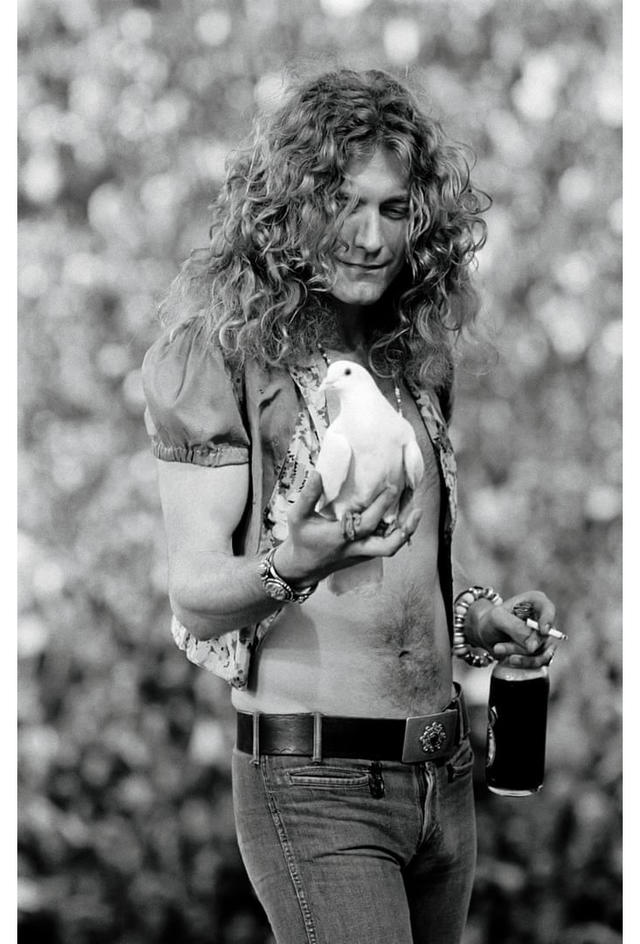 Here's Robert Plant having a wildlife encounter of his own at Kezar Stadium in San Francisco in 1973. The photographer, Neal Preston, later called it the best picture he ever captured. Of Plant, he said, "Nobody else could have pulled it off without looking pretentious." The Guardian