An analysis of history textbooks books used at schools in Texas and California found them altered by partisan politics. Students in both states, for example, learn about the Harlem Renaissance. Texans, however, also read that critics "dismissed the quality of literature produced." In an annotated Bill of Rights, a California textbook explains that rulings on the Second Amendment have allowed some gun regulations. The Texas edition leaves that space blank. N.Y. Times

The Federal Emergency Management Agency is trying to recover nearly $4 billion from PG&E for work it performed in response to California wildfires. And if the utility doesn't pay up, it plans to bill wildfire victims for a portion of the money instead. Wildfire survivors are fighting FEMA's effort, arguing in part that it undermines the agency's very mission: To assist disaster victims. S.F. Chronicle | Press Democrat 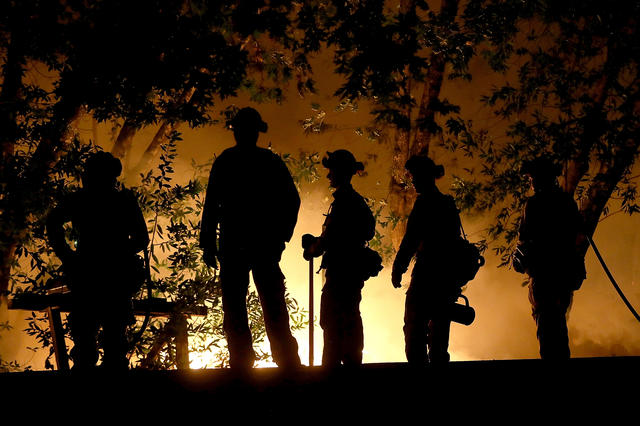 CalFire firefighters near Calistoga in 2017. Newsom wants to grow the force by more than 10 percent.

Gov. Gavin Newsom's budget proposal calls for the state to add more than 600 new firefighters as California grows warmer and development pushes further into fire-prone areas. Six of the 10 most destructive wildfires in state history have taken place since 2010. Mercury News | Sacramento Bee

The budget also seeks a one-time allocation of $50 million that would help animal shelters end euthanasia of cats and dogs. "We want to be a no-kill state," Newsom said. Sacramento Bee | The Hill

Researchers have known for a long time that childhood trauma increases the risk of serious health problems later in life. Now California has become the first state in the nation to create a formal reimbursement strategy for screening childhood trauma, paying health care providers to screen patients covered by Medi-Cal. "To say that it's groundbreaking," one pediatrician said, "would be an understatement." California Health Report | California Healthline

Car break-ins are surging across parts of the Bay Area. Since 2018, car burglaries have risen by 25 percent in Oakland, 32 percent in Berkeley, and 48 percent in San Leandro. Law enforcement officials say the crime wave — along with laptop thefts in cafes — has been fueled by a black market hungry for laptops. "Unfortunately, it's so easy to take a laptop, and so easy to flip it," a prosecutor said. "They can get a couple hundred dollars cash for each." Mercury News | S.F. Chronicle

In the winter of 2013, a 94-year-old woman was found brutally murdered in her Yuba City apartment. Police had no suspects. Then they went knocking on a neighbor's door and found Michael Alexander, a socially awkward gamer with an intellectual disability.

A nine-month Chronicle investigation revealed in infuriating detail how police appeared to coerce a confession from an innocent man, then charged him with murder and kept him in jail for more than three years — even as evidence of the real killer was readily at hand. S.F. Chronicle 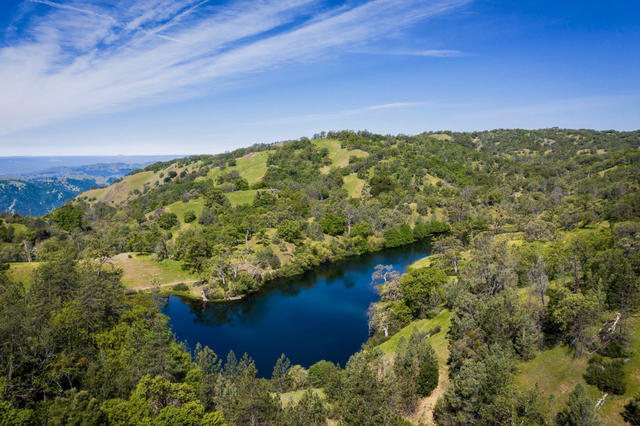 The N3 Ranch is up for sale for the first time in 85 years.

California wants to create one of the largest new state parks in decades. Gov. Gavin Newsom asked legislative leaders to dedicate $20 million for the purchase of parkland, while declining to say where. But signs point to the legendary N3 Ranch near Livermore, a mostly pristine wilderness covering 80 square miles. It's by no means a sure thing, the broker said. The property, asking $72 million, has been on the market since last July and has drawn significant interest. L.A. Times | A.P.

Here are pictures of the property. 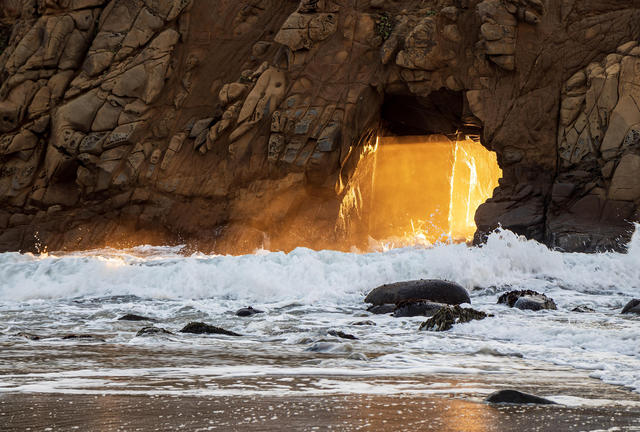 Keyhole Arch on the Big Sur coast is gorgeous any time of year. But for a few weeks every December and January, the rock puts on a dazzling show as the setting sun aligns just so, sending beams of light through a natural doorway. A Long Beach photographer, Jakob Patterson, shared a recent picture, above. outdoor project 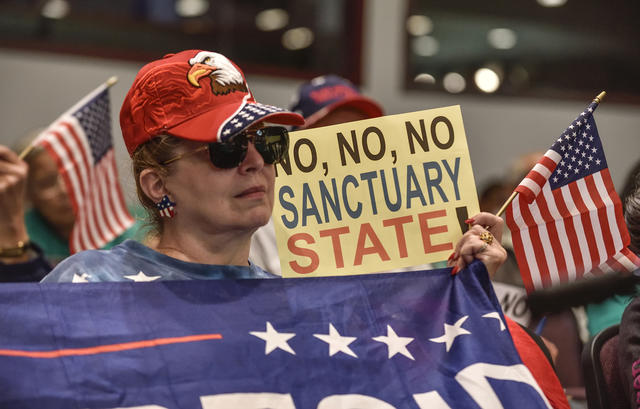 Stella May listened as Orange County supervisors discussed whether to join a lawsuit opposing California's sanctuary law in 2018.

A state appeals court overruled a lower court decision that had allowed Huntington Beach to ignore the state's sanctuary law. A number of California jurisdictions have opposed the law, which limits cooperation between law enforcement and immigration agents. But only Huntington Beach took the state to court. A city official warned of a future where an overbearing state renders local governance "pointless." O.C. Register | S.F. Chronicle

In a survey of Hollywood assistants, more than 100 out of 1,500 said that a boss had thrown something at them. Emboldened by #MeToo, entry-level workers in a notoriously demeaning job are banding together and demanding more money and better behavior. Their movement is called #PayUpHollywood. "I just don't think we can be silent on certain things anymore," a former assistant said. N.Y. Times 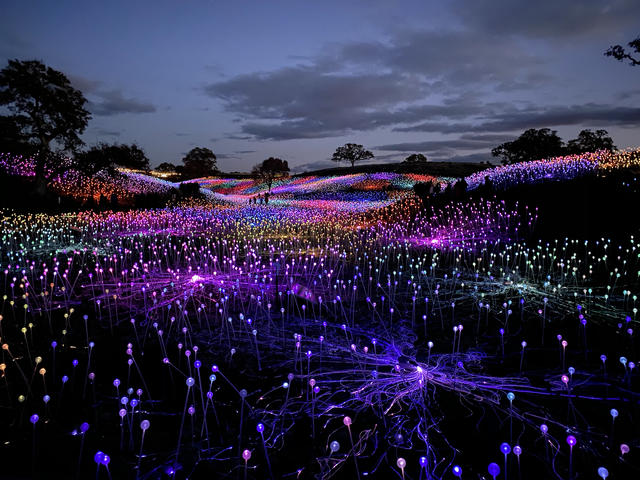 The N.Y. Times included a light show in Central Coast wine country on its list of "52 Places to Go in 2020." The artist Bruce Munro's Field of Light, a luminescent pasture of nearly 60,000 glass orbs in Paso Robles, has been so popular that the temporary installation is being extended through June. N.Y. Times | Paso Robles Press 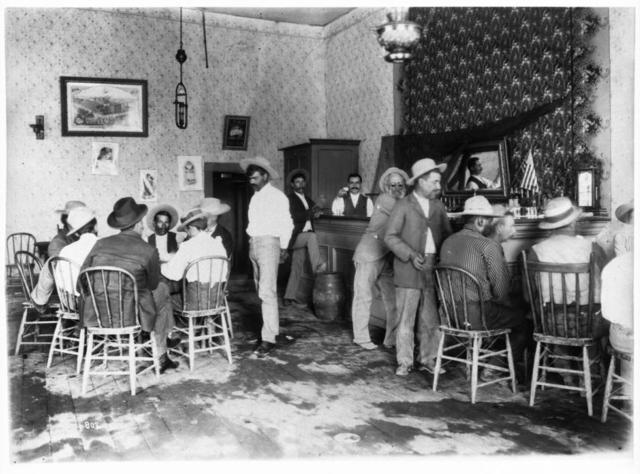 Men hung out at a Southern California saloon, circa 1898. Insult-driven brawls were common at the time.

Forged in violent conquest and riven by racial animus, the frontier city recorded a murder rate 50 times greater than that of New York City. Yet killers and thugs often escaped accountability as the city's fledgling legal system was simply unable to keep up with the carnage. It was in this unsettled atmosphere that outlaw justice came to be viewed by even the most enlightened Angeleno as a public good.

Such was the sentiment in the fall of 1854 after Dave Brown, a former scalp hunter with a violent temper, fatally plunged a knife into his roommate's chest during a drunken quarrel.

A crowd gathered and plotted revenge. Brown would surely have been doomed that day had the city's mayor himself, Stephen Foster, not climbed atop a table and urged patience. If the courts fail to deliver justice, he declared, "I will resign my office and assist you in the hanging myself."

It was three months later, on this week in 1855, that Foster kept his word. 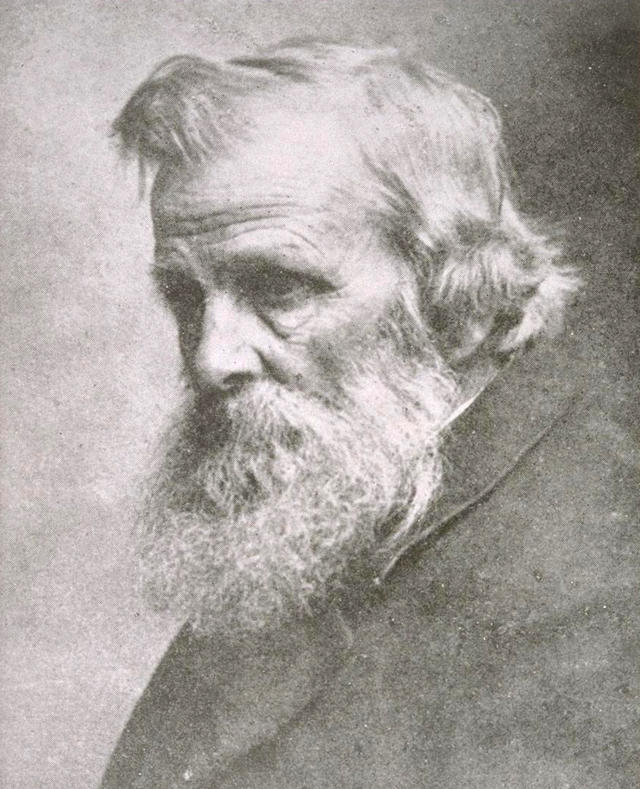 Stephen Foster, circa 1880, led Los Angeles during a period of lawlessness.

While a local jury returned a guilty verdict against Brown, California's Supreme Court issued a stay of execution. On Jan. 12, 1855, Foster informed a gathering at the jailhouse that he had resigned as mayor and asked what they wanted done with Brown. "Hang him!" was the reply.

So be it, said Foster, who anticipated a violent clash with the sheriff and his deputies. He added, "And I will die with all of you." Armed with axes, men forced their way into the jail to find that the lawmen had fled. Brown was dragged from his cell and hanged from an improvised gallows across the street.

Yet Foster's embrace of mob violence was seen by the public as the righteous act of a leader with no better choice. Popular justice, they reasoned, was better than no justice. Less than two weeks after Brown breathed his last, Foster was reelected as mayor in a near unanimous vote. The city marshal who opposed the vigilantes was forced to resign.