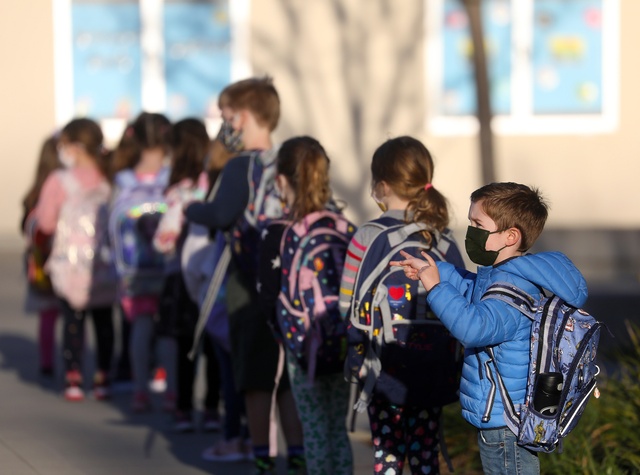 Kindergarten students lined up at Greenbrook Elementary School on Feb. 10.

Desperate to get kids back in classrooms, California leaders announced a deal Monday to dangle $2 billion in incentives for school districts that resume in-person instruction by April 1. Under the terms, for every day districts miss the deadline, they'll lose 1% of the funding. Gov. Gavin Newsom portrayed the deal as a hard-won triumph. Reaction — sampled below — was mixed. EdSource | A.P.

A Los Angeles labor leader condemned the plan, which she said propped up structural racism by ensuring money goes to wealthier, whiter districts where infection rates are lower and reopening is less fraught. Politico | KABC

The L.A. Times editorial board also criticized the deal — for lacking urgency: "We're sacrificing weeks of in-person schooling in order for teachers to obtain a little extra protection in schools, many that have already been operating safely without vaccines."

With 97 coronavirus deaths, the deadliest nursing home in California is Kei-Ai Los Angeles Healthcare Center, a facility built for Japanese Americans. Covid-19 cases had plateaued at the home for months until December, when infections and deaths soared. That was when the region's ICU capacity maxed out and Kei-Ai took in at least 71 overflow patients, according to a doctor. Families were unaware of what was happening. L.A. Times 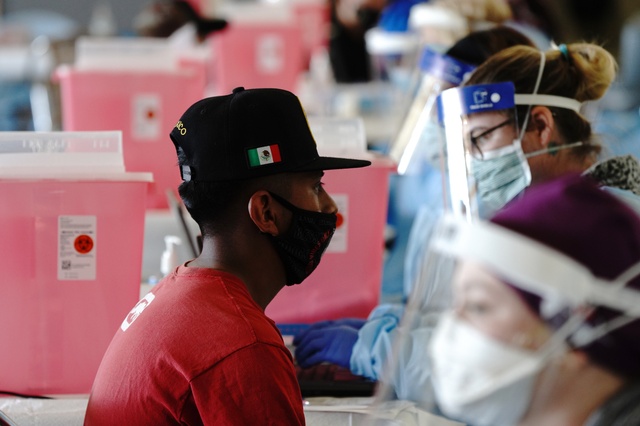 A farmworker waited to be immunized at a vaccination clinic in Coachella on Feb. 17.

A vaccination effort in the Coachella Valley is the first in the nation to prioritize farm workers, regardless of their age and health conditions, on a large scale. The program brings pop-up vaccination sites into the fields, where workers are spared the online registration experience and hours-long waits. America Aguilera, a farm worker, said she could recall no instance of undocumented immigrants getting such preferential treatment. “With all due respect,” she said, “it’s about time we got the opportunity to be first at something.” N.Y. Times 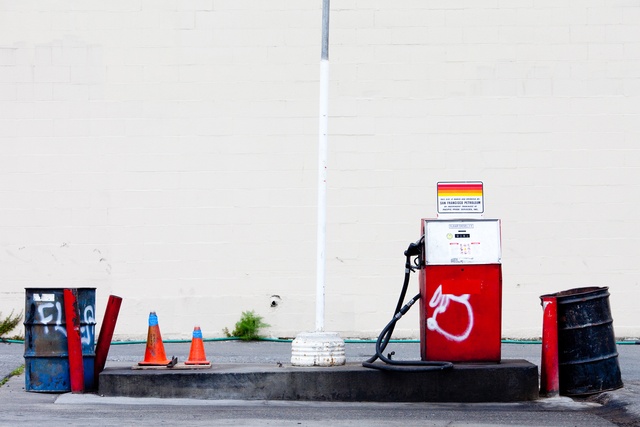 Petaluma officials are looking to move away from fossil fuels.

Petaluma has become the first city in the nation to permanently ban new gas stations — even if one of its current 16 stations goes out of business. The measure, which also streamlines new electric vehicle charging stations, is being hailed as a watershed moment among climate activists. “The goal here is to move away from fossil fuels, and to make it as easy as possible to do that,” a council member said. Argus-Courier | Gizmodo

Five years after California legalized marijuana, some employers still test workers for past marijuana use. Now a new bill would prevent companies from using results of urine or hair tests — which can indicate past marijuana use but not one's current level of intoxication — as justification for termination or denying employment. “Urine tests are like going through employees’ trash every week and looking around for empty beer cans or liquor bottles," a supporter of the measure said. Sacramento Bee | KTLA 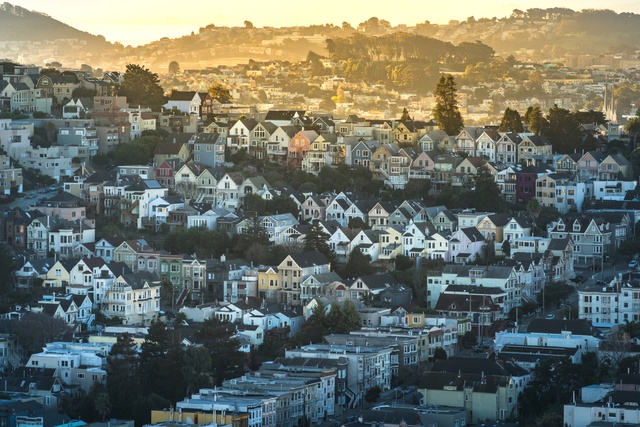 In Bay Area cities, land is scarce and lots are small.

A movement to eliminate single-family zoning has caught on in several California cities, including Sacramento and Berkeley. But some builders say those hoping that the change will increase housing stock shouldn't hold their breath. Daniel Solomon, a Bay Area architect who has designed fourplexes on single-family sized lots, called it a "completely fallacious" idea. "Just because something is permitted doesn’t mean it happens," he said. S.F. Chronicle

A serial killer known as the the “I-5 Strangler” in the 1970s and 1980s was killed in his cell at Mule Creek State Prison southeast of Sacramento, officials said. Roger Kibbe, 81, was serving multiple life sentences for killing at least seven women. He was found lifeless on the floor of his cell with his cellmate, 40, standing nearby during a routine check. A homicide investigation was opened. S.F. Chronicle | A.P.

The raconteur known as Broke-Ass Stuart said for the first time in a long time he's optimistic about the future of San Francisco. "The reason for this is that almost every person in San Francisco is here because they want to be here. Whether they’re transplant or native, rich or scraping by, tech worker or artist, nearly everyone here looked the pandemic in the face and said, 'Not even you can make me leave San Francisco.'" S.F. Examiner 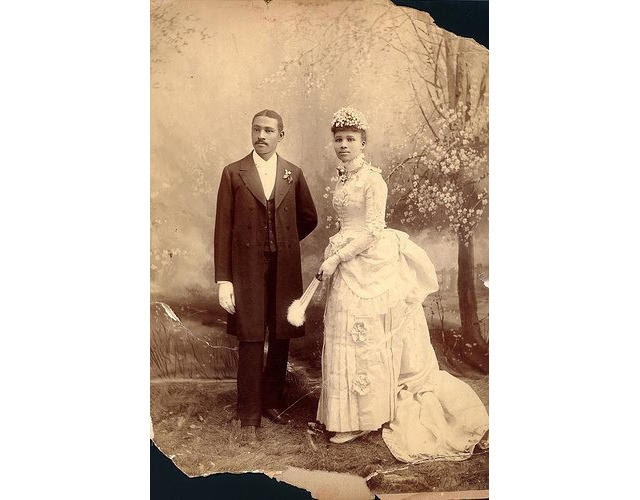 The pioneer couple Charles and Willa Bruce in an undated wedding photo.

Bruce's Beach was once a thriving Black-owned resort in Manhattan Beach until disgruntled white neighbors drove the owners from town. The resort was razed. A century later, L.A. County is looking into returning the land to descendants of the Bruce family. "I want L.A. County to be part of righting this wrong,” said Supervisor Janice Hahn. NBC LA 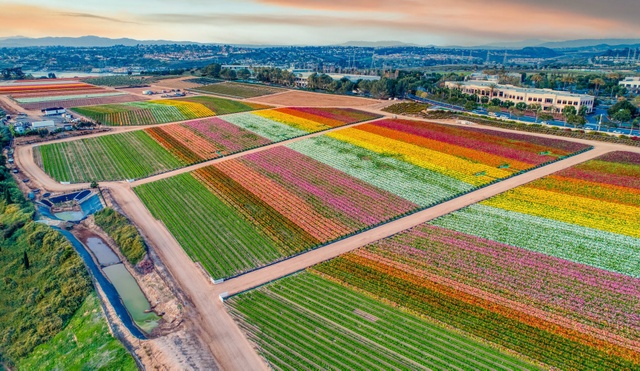 Carlsbad's famous Flower Fields reopened to the public Monday after shuttering early last year because of the pandemic. The brilliance of the ranunculus blossoms on 50 acres overlooking the Pacific owes to generations of toil. Each year, only the healthiest and brightest flowers are used to produce seeds for the next crop. Over time, they have developed long stems, spirals of multi-layered petals, and exotic colors, including café, lavender, and variegated picotee. kpbs | NBC 7

At first glance, a homeless encampment along a boulevard in Oceanside looks like any other, with tents in a row. But a closer look reveals that the tiny community of 13 people is spotless. Rodney McGough, who lives there, has led the effort to keep the site clean and organized. “We understand that trashing this area is the number one reason why people wouldn’t want us here,” he said. S.D. Union-Tribune 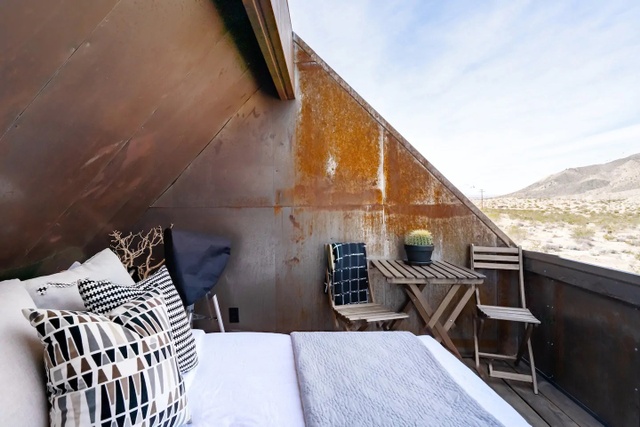 A tiny home in Twentynine Palms has an open-air bedroom.

A home with floor-to-ceiling windows on 120 secluded acres; a geodesic dome that was featured on the cover of a design magazine; and a minimalist cabin with a bedroom that opens up to the stars. A travel writer who specializes in off-grid adventures listed her 11 favorite Airbnbs for nature lovers near Joshua Tree. Field Mag