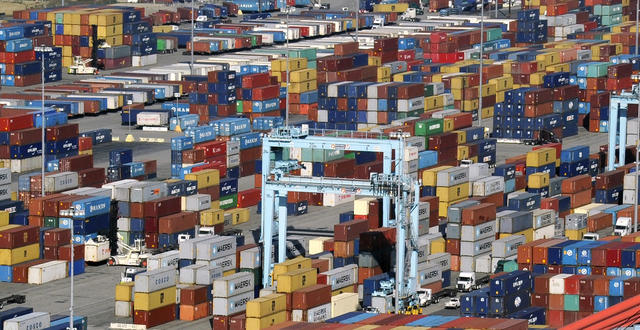 Cargo containers were stacked at the Port of Long Beach in 2015.

California air quality regulators adopted their biggest pollution-cutting regulations in more than a decade, requiring diesel trucks and cargo ships to cut tons of air pollution. Moving goods from ship to truck to warehouse accounts for nearly half of California's air pollution, much of it choking disadvantaged communities. Critics said the new rules would hurt an already battered economy. L.A. Times | CalMatters

More than a dozen police reform measures were introduced in the state Legislature after the police killing of George Floyd in May. Three months later, much of the package of bills appears headed for full or partial defeat. Supporters of the reforms are blaming the shortened session, opposition from law enforcement groups, and "weak-kneed legislators." L.A. Times | A.P.

Among the most controversial bills is one that would require cops to be state-certified. The L.A. Times editorial board called it long overdue: "Bad apples may not be the only problem in policing, but they are clearly an important one."

Protests over the Kenosha police shooting of Jacob Blake broke out in California again on Thursday. In Los Angeles, demonstrators showed up at the home of Police Chief Michel Moore and plastered it with anti-police posters. In Sacramento, protesters smashed up several downtown businesses and vandalized the Sacramento County sheriff’s office, district attorney’s office, and City Hall. A.P. | Sacramento Bee | KABC 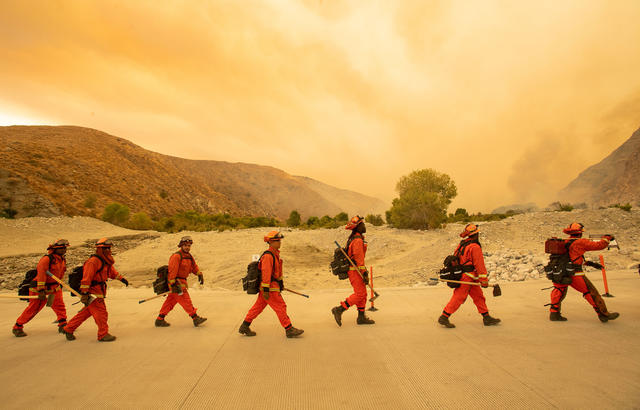 Inmate firefighters arrived at the Water fire in Riverside County on Aug. 2.

Inmates are an integral part of California's firefighting force. Yet after their sentences end, their criminal records make it virtually impossible to get hired by fire departments.

Washington Post opinion column: "This is the great wrong of California’s inmate firefighting program. It shows us exactly what offenders need to set their lives to rights: the opportunity for meaningful and recognized work that connects them to society and positive social relationships. Yet the program is based on a system of justice that largely denies people such pathways — mass incarceration." 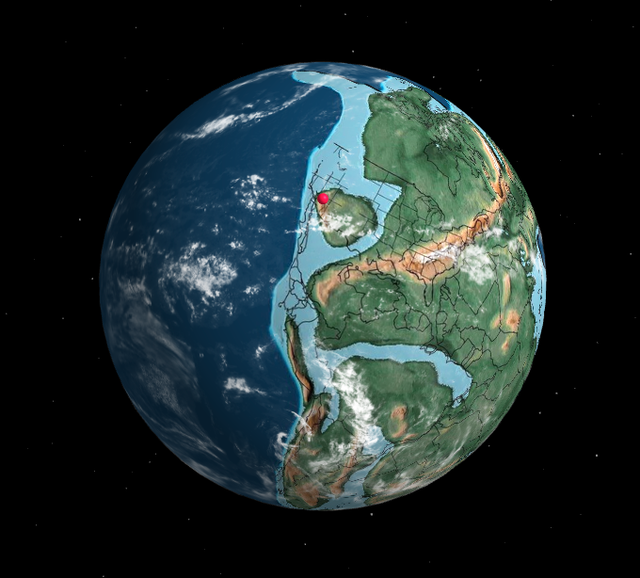 ☝️ That red dot is Needles, California, 260 million years ago.

That's according to a fascinating mapping project by engineer and Google alumnus Ian Webster. Using a trove of tectonic and paleogeographic data, he created a tool that lets you plot modern addresses from up to 750 million years ago, including a time when California lived up to the myth of being an island. Dinosaur Pictures 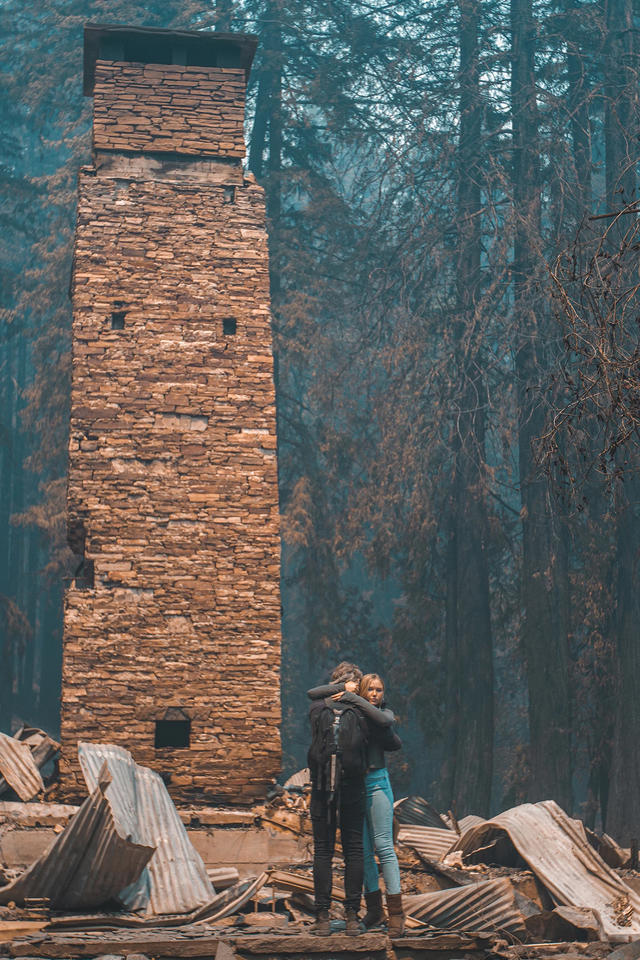 "You are strong, thanks to this home. You carry the memories of our canyon. You are made of Mill Creek water, the fruit from our trees, Swanton berries, and Pacific salmon. You are my wild child."

Wallace J. Nichols, a marine biologist, wrote his daughter a letter breaking the news that their home in the redwoods north of Santa Cruz burned to the ground — a day after she left for college. It's heartwrenching. Outside Magazine

More than 50,000 people forced to flee their homes in Northern California were allowed to return by Thursday. A.P.

San Francisco's dining landscape, once declared the best in America by Bon Appétit magazine, may never be the same. A new study found that sales at city restaurants have dropped by 91% since March. More than half of the restaurants are ringing up no sales at all. That means roughly 1,300 have closed, either temporarily or for good. Eater San Francisco | SFist

On this week's California Sun Podcast, host Jeff Schechtman talks with Geoffrey King, the founder of Open Vallejo. He founded the nonprofit newsroom in part to shine a light on one of the nation's most violent police forces. Vallejo residents are fed up, he said. "And it seems at every single turn, the city government either ignores their pleas or in fact in some cases people are retaliated against." California Sun Podcast 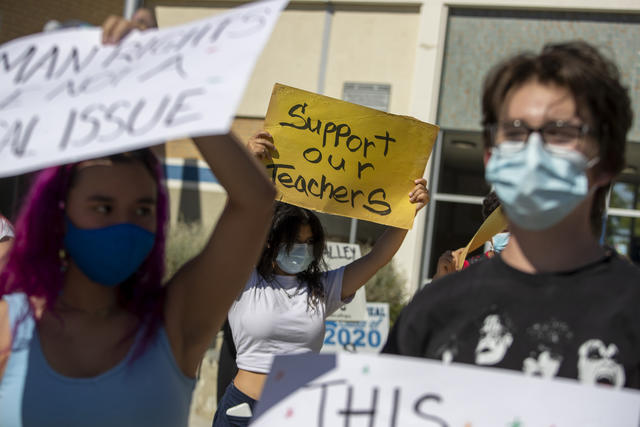 Students rallied on Wednesday in Los Angeles in support of a teacher who wore an "I can't breathe" shirt to class.

A Los Angeles teacher appeared before her ninth-grade class a couple weeks ago wearing a T-shirt with the words “I can’t breathe.” A parent objected to the slogan, posting a screenshot of the teacher that was shared widely on social media. "I just want my daughter to go to English class and learn about English,” he said. The turmoil that followed has included death threats, protests, and requests for restraining orders. L.A. Times | CBSLA

Sky Brown, of Huntington Beach, is a 12-year-old skateboarding prodigy with dreams of qualifying for the 2021 Olympics in Tokyo. She asked Tony Hawk to help her learn to do a "mega ramp" in Southern California. Her attempts, viewed nearly 3 million times on Twitter, are nerve-wracking — and awesome. 👉 @tonyhawk 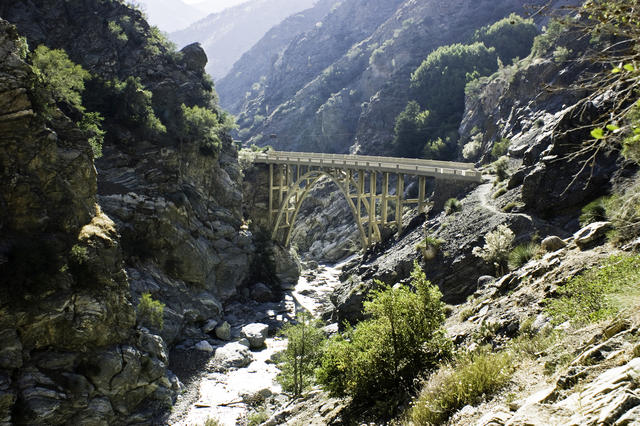 In 1938, a monster flood wiped out a road-building project, leaving the bridge pictured above stranded in the San Gabriel Mountains.

The Bridge to Nowhere, as it's known, was constructed across the east fork of the San Gabriel River as part of an ambitious plan to blast a roadway through the precipitous terrain. Then the “storm of the century” hit, ripping the roadway to pieces and killing the project. It may have never felt the rubber of vehicle tires, but the elegant 120-foot-high span lives on with purpose nonetheless — as the prize for hikers who venture 5 miles into the gorgeous wilderness. California Through My Lens | Hikespeak 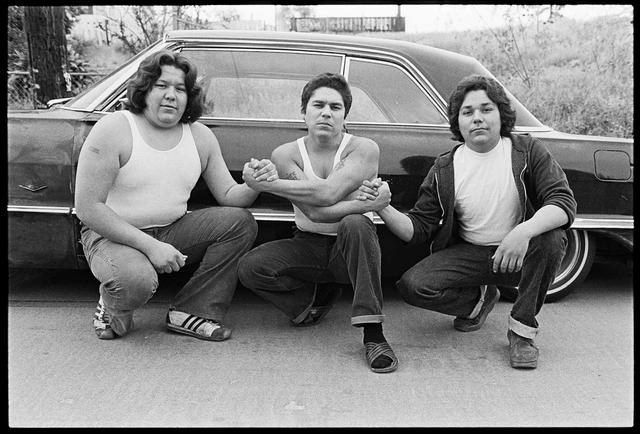