With the recall vote less than two weeks away, one of California's most respected pollsters offered the strongest indication yet that Gov. Gavin Newsom would keep his job. A survey by the nonpartisan Public Policy Institute of California found that 58% of likely voters oppose removing Newsom, while just 39% want him out. A key factor behind Newsom's strength appeared to be fears about the coronavirus. Politico | S.F. Chronicle

A consolidated average of polls by FiveThirtyEight showed 51% opposed to the recall and 45% in favor. 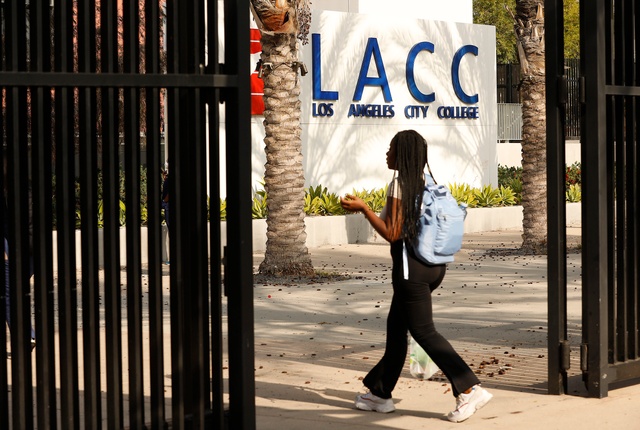 A student returned to class at Los Angeles City College, one of the targeted campuses.

More than 65,000 fake students applied for financial aid at California community colleges in what is believed to be one of the state’s biggest financial aid scam attempts in recent history. It was unclear if any money was disbursed. The fraud also threw off enrollment numbers, prompting many professors to assess whether they have a class of students or bots. A journalism instructor said she was down to six real students among 45 registered. L.A. Times

The state Legislature passed a first-in-the-nation measure to require that department stores display children's toys in gender neutral ways. “We want to make sure that there’s no stigma around a little girl who wants to be a scientist or engineer, or a little boy who wants to be artistic and creative by painting his nails,” the bill's author, Assemblyman Evan Low, told the San Gabriel Valley Tribune in March. Critics called the measure "paternalistic" and hostile to free-market enterprise. A.P.

One of California’s greatest areas of antiquity is spread across the rugged high desert of the Eastern Sierra. As long as 8,000 years ago, prehistoric clans carved hundreds of fantastical works of art into the area’s volcanic boulders: concentric circles, tree-like figures, rattlesnakes, hunters with bows and arrows. Preserved within the Volcanic Tablelands in the Owens Valley, a few magnificent clusters of the petroglyphs are open to the public just north of Bishop. Archaeologists are uncertain exactly what the symbols represent. But it's easy to imagine how the artists found inspiration standing amid the austere beauty of desert, mountain, and open sky. BLM | Eastern Sierra | outdoor project

Below, a few images by the photographer Matt Artz. 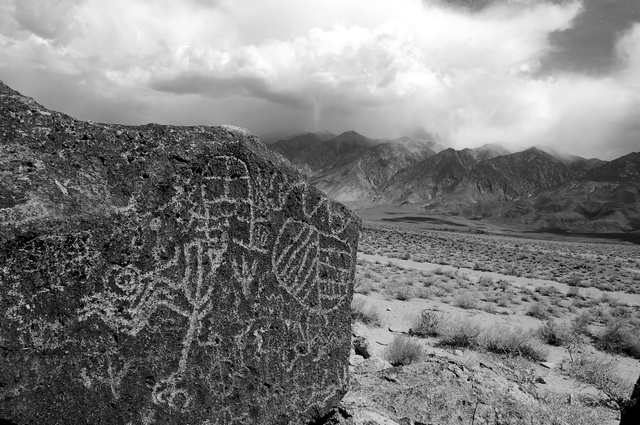 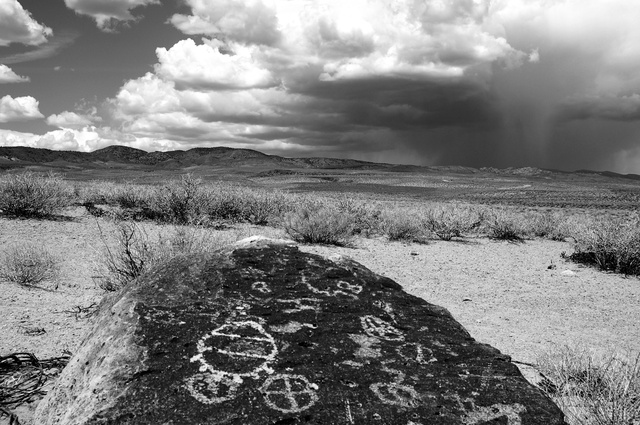 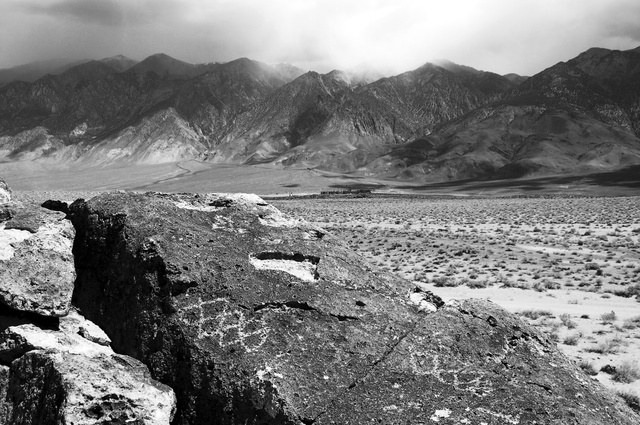 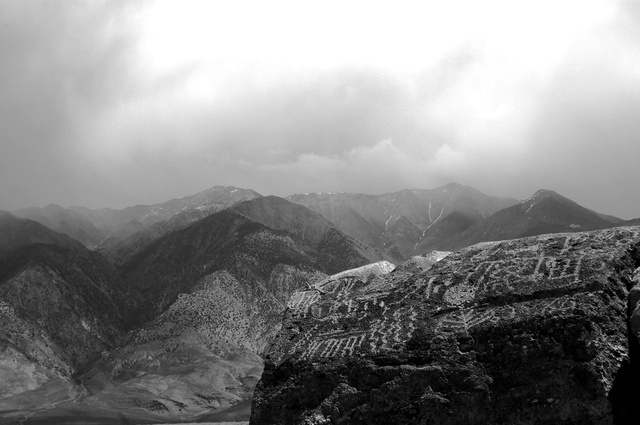 With winds in the Tahoe region expected to die down on Thursday, some fire experts said the worst appeared to be over more than 18 days into the fight against the Caldor fire. The flames stayed away from South Lake Tahoe and many of the homes in Christmas Valley and Meyers, both within the Tahoe basin. But exhausted firefighters weren't able to rest yet as the fire lurched toward communities across the Nevada state line. “We all know we still have a long grind ahead of us,” a Cal Fire official said. L.A. Times | A.P. | S.F. Chronicle

Heavenly Mountain Resort and Kirkwood, two of Tahoe’s most famous ski resorts, have been running their snow-making machines around the clock, soaking everything in sight. Mercury News 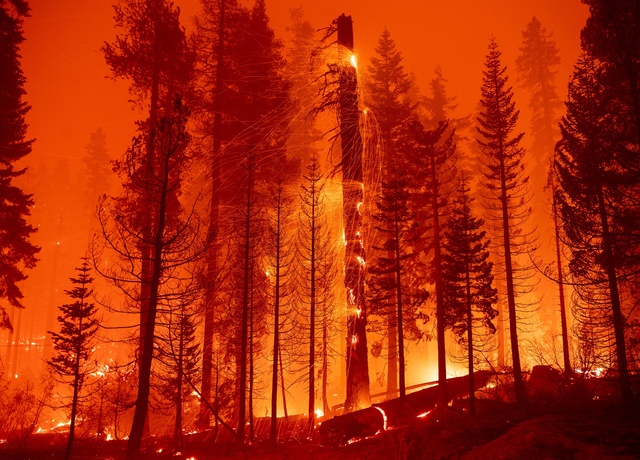 Embers flew off a burning tree during the Caldor fire in Twin Bridges on Sunday.

"The day feels toxic. All those tiny pieces of ash combining to shroud Lake Tahoe, a gray miasma that warns of the megafire just eight miles from the shore. But the night. The night feels treacherous. Well after dark the Caldor fire engulfs pine trees with a crackling sound that crescendos into a roar. The flames don’t burn boughs laden with needles so much as they make them disappear with a blinding flash." N.Y. Times

Dominic Foppoli, a former Wine Country mayor who resigned in May after nine women accused him of sexual assault, filed paperwork on Tuesday to run again for mayor. When the allegations arose, virtually every public figure in Windsor denounced him; his chief political ally called him a "predator." Sophia Williams, one of Foppoli's accusers, was dumbfounded by his apparent plan for a comeback: “I would never want to show my face in the light of day again and here he is — just can’t not be in the spotlight.” S.F. Chronicle | KTVU

Arrayed along the south San Francisco Bay are a collection of multicolored salt ponds fitted together like giant puzzle pieces. The massive mining operation extracts the mineral through evaporation, yielding the pinks, reds, and yellows of microbes that thrive at different levels of salinity. The aerial view is a treat for travelers landing at SFO. A few days ago, Brett Stevens, a paramotor enthusiast, got a closer look during a sunset flight. 👉 Reddit (~1 min)

The San Diego County Board of Supervisors became the first in the nation to declare medical misinformation a public health crisis on Tuesday. The vote came after an astonishing 15-hour meeting that included the sort of rancor now commonplace during public comment on vaccine and mask policies. “We’re in the unfortunate position of taking action against an issue we wished didn’t exist,” said the board chair, Nathan Fletcher. S.D. Union-Tribune | NBC San Diego

"You know that those masks don't do anything."

"This is psychological warfare. It has nothing to do with our health."

"Within 10 years, 2.1 billion people could die from these dangerous Covid shots."

A San Diego County Board of Supervisors meeting in August illustrated the problem. 👉 @TheActivatedPod 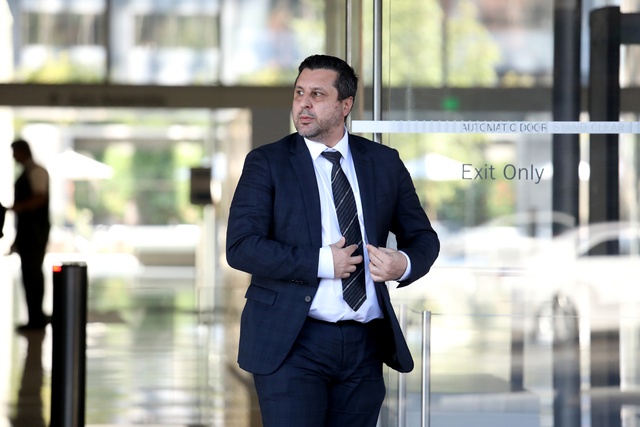 In June, a Tarzana couple was convicted of conspiring with family members and others to swindle $18 million in emergency relief money using fictitious companies. Now Richard Ayvazyan, 43, and Marietta Terabelian, 37, are missing. Scheduled to be sentenced on Oct. 4, the pair is believed to have cut their ankle monitoring bracelets and gone on the run. They are considered fugitives, the FBI said. L.A. Times | NBC Los Angeles

A federal lawsuit that accuses the Beverly Hills Police Department of bias includes a startling statistic: Of 106 people arrested by a “safe streets” task force in 2020 and 2021, all but one were Black. Created under pressure from businesses on Rodeo Drive, the unit targeted people roller skating, scootering, and jaywalking, the lawsuit said. “There’s absolutely no way that the city of Beverly Hills is going to be able to argue that there was some kind of non-racially motivated basis for those arrests,” said constitutional rights attorney Alexandria Kazarian. LAist | CBSLA

The lawsuit cited a video of police officers stopping Salehe Bembury, a Versace executive, for jaywalking, then patting him down for weapons. Vimeo (~3:40 mins) 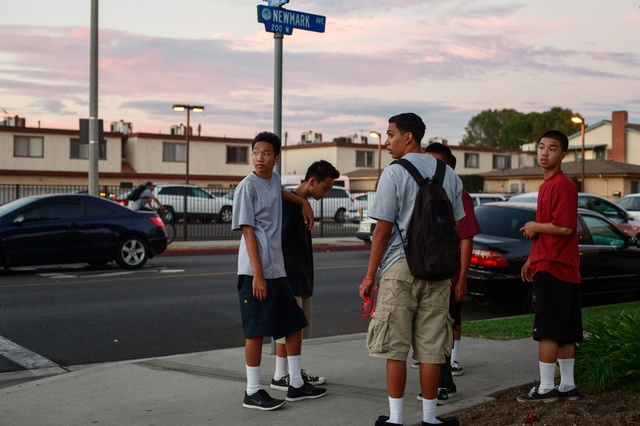 In the 1980s, a wave of Asian newcomers moved into a band of predominantly white bedroom communities in the San Gabriel Valley, a cultural transformation attributed in part to relaxed immigration laws and rising economic mobility. Once moribund business strips sprang to life with Filipino grocers, Vietnamese cafes, and Japanese bakeries. Sociologists declared Monterey Park the first suburban Chinatown in America. Today, the region is home to an Asian-American population of more than half a million people, more than that of 42 states.

Raised in San Gabriel Valley, the photographer Jessica Chou said the community always had a feeling of "same but different," an idea she explores in her photo series "Suburban Chinatown." “It’s seeing how the immigrant community has grounded its way into this type of landscape," she told China Underground. "So it’s seeing assimilation as a two-way street.” See a selection of Chou's photos. 👉 It's Nice That | JessicaChouPhotography.com