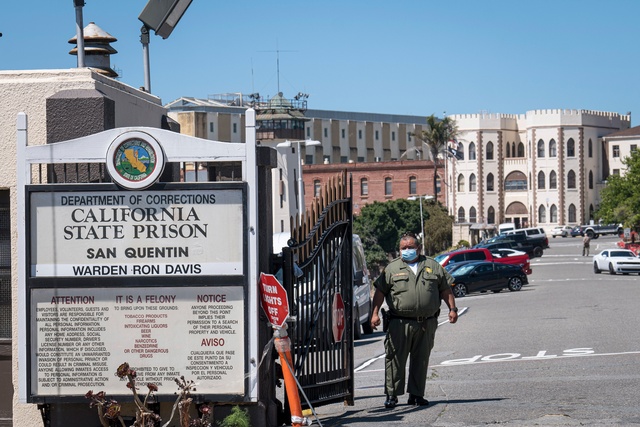 California prisons have been hotspots of coronavirus infection.

Gov. Gavin Newsom has explained his Covid vaccine mandates for state workers and students as necessary measures to save lives. But his approach has differed for prison guards, a group backed by a powerful union that donated $1.75 million to Newsom's recall defense. On Wednesday, CalMatters reported that the governor asked an appeals court to overturn a judge's order requiring prison guards to get inoculated. SFGate.com | Mercury News

The California attorney general’s office filed felony charges against the leader of the state's largest labor union, accusing her of tax fraud, embezzlement, and perjury. Alma Hernández and her husband under-reported their income by more than $1.4 million to evade $143,000 in taxes, prosecutors said. Hernández resigned, ending her 11-year tenure at SEIU California, which represents more than 700,000 workers and wields significant political influence. Sacramento Bee | L.A. Times 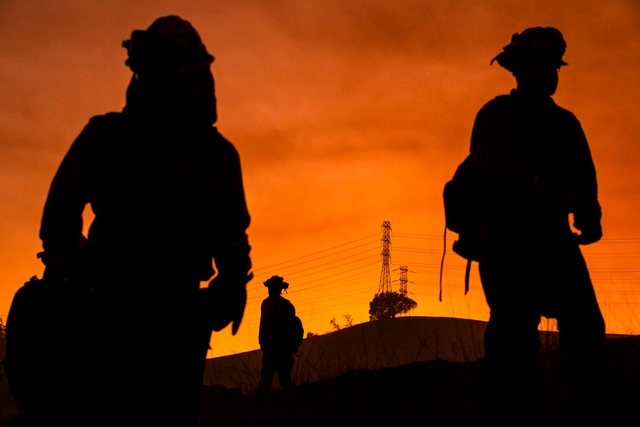 Firefighters battled a wildfire in Healdsburg on Oct. 26, 2019.

Researchers estimate at least 4 million acres burned each year in prehistoric California. In recent decades, that amount of annual wildfire acreage across the entire country has been portrayed as "extreme." ProPublica wrote about the "insanity" of how we manage fire: "We keep doing overzealous fire suppression across California landscapes where the fire poses little risk to people and structures. As a result, wildland fuels keep building up. At the same time, the climate grows hotter and drier. Then, boom: the inevitable."

If the forecasts hold true, California will at long last get a good drenching soon. The National Weather Service said an atmospheric river — a dense band of moisture likened to a river in the sky — could swirl into the state between Oct. 21 and Oct. 27. Its arrival would quench wildfires, put a dent in the drought, "and replenish water resources throughout the West Coast.” L.A. Times | SFGate.com

New analysis: the summer months this year were California's driest since 1895. S.F. Chronicle 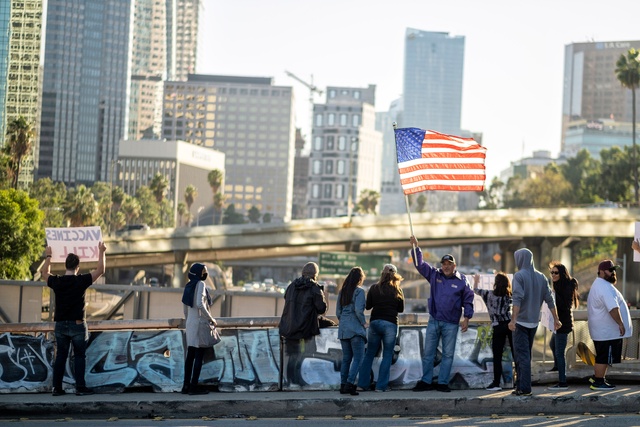 A few dispatches from the vaccine wars: 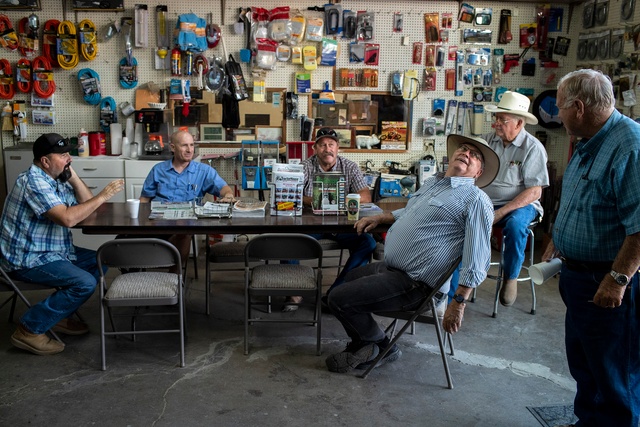 Farmers, ranchers, and residents at the NAPA Auto Parts store in Stratford on Sept. 22.

In tiny Stratford, about 40 miles south of Fresno, the old-timers gather for their morning coffee at the local auto parts store. On a recent day, they recalled how Stratford once flourished, abounding with farming jobs and businesses. “It used to be a little Mayberry when we were kids,” said hay farmer Danny Rodrigues. Now jobs and residents are fleeing. The L.A. Times wrote about how years of drought and recession are hollowing out California's small farming towns.

A Bay Area police chief is on leave after a family member accused her of assault and threats to kill. In a restraining order request, the family member, an 18-year-old woman, said Richmond Police Chief Bisa French and French's husband, an Oakland police sergeant, became violent while demanding that the woman leave the man she says is her partner. The Frenches say the man, once convicted of human trafficking, is in reality a pimp and that the young woman is being manipulated. Mercury News | KGO 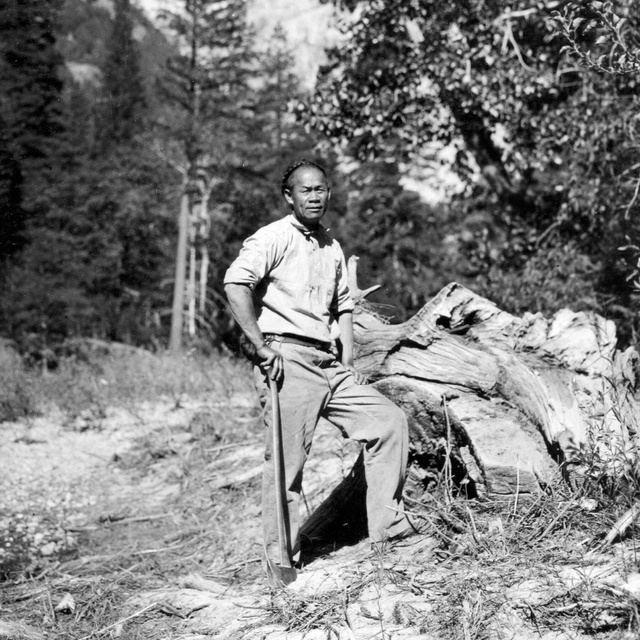 Tie Sing, a cook working for the United States Geological Survey, at Yosemite National Park in 1909.

In 1882, Chinese workers used pickaxes and shovels to carve the 56-mile route that became Tioga Road, traversing Yosemite National Park from its east and west entrances. Chinese workers also served in Yosemite as cooks, laundry workers, and gardeners. That history has been largely overlooked in park exhibits— until now. This month, a former laundry building at the iconic Wawona Hotel was dedicated as a visitor attraction honoring Chinese contributions to the development of Yosemite. Fresno Bee | NBC News 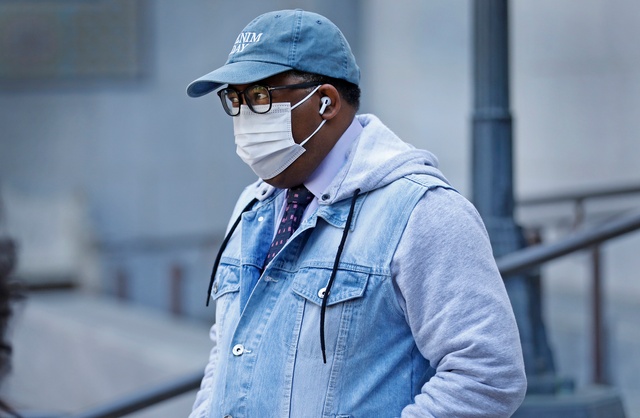 City Council member Mark Ridley-Thomas, one of the most powerful politicians in Los Angeles, was charged on Wednesday with a bribery scheme. In a federal indictment, prosecutors said Ridley-Thomas conspired with a USC dean to steer millions of dollars in public funding to the university in exchange for a scholarship and teaching job for his son. Ridley-Thomas declined to comment Wednesday. The dean, Marilyn Louise Flynn, denied wrongdoing through her lawyer. L.A. Times | A.P.

President Biden announced Wednesday that the Port of Los Angeles would begin operating “24 hours a day, seven days a week” to relieve the logjam in the nation's overworked supply chain. White House officials said the nearby Port of Long Beach moved to an around-the-clock schedule last month, though port officials portrayed that as an exaggeration. With blockages up and down supply chains, some experts were skeptical the longer hours would make a difference. N.Y. Times | Washington Post 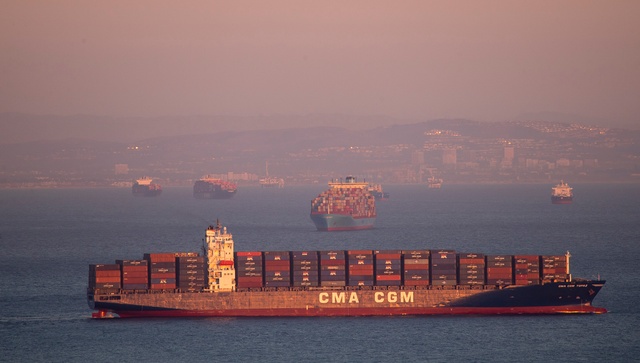 Ships waited to be unloaded at the Ports of Los Angeles and Long Beach on Wednesday.

There's a facility at the Port of Long Beach that provides meals, internet, television, and a place to rest for the foreign workers who staff container ships. Lately, it's been empty. With unprecedented gridlock at American ports, seafarers have remained stuck on their ships, some going for months without ever setting foot on land. Long Beach Business Journal reported on an overlooked symptom of the port crisis: stir-crazy seafarers. 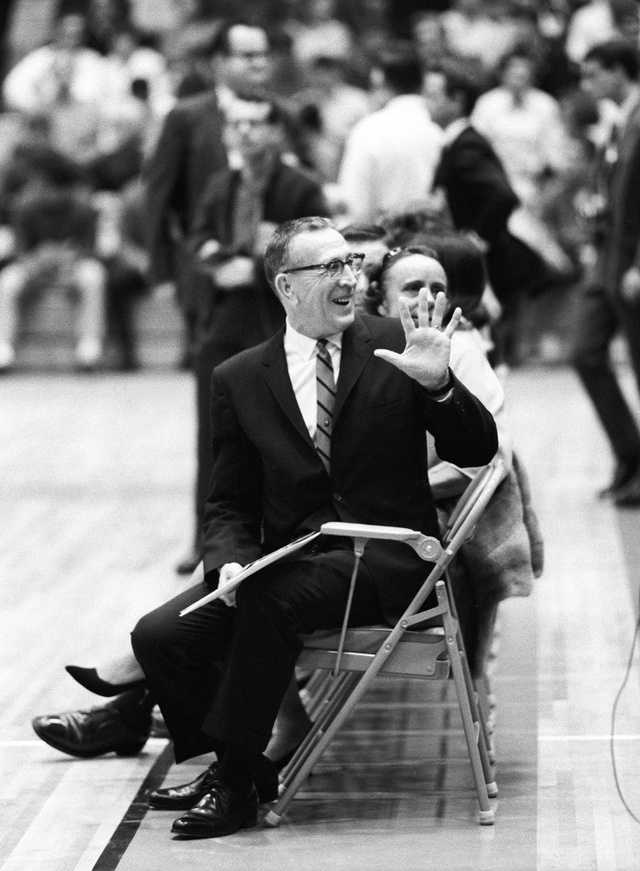 The quintessential American coach, Wooden arrived at UC Los Angeles in 1948 to take over a little-known basketball program that played in a cramped gym. He left in 1975, having transformed the Bruins into a powerhouse with 10 national championships. Wooden was said to be as conversant in Shakespeare and the Bible as basketball, imparting lessons that transcended sport.

"A coach is someone who can give correction without causing resentment."

“The true test of a man’s character is what he does when no one is watching.”

"Ability is a poor man's wealth."

"You can't live a perfect day without doing something for someone who will never be able to repay you."

“Make each day your masterpiece.”