The 9th Circuit Court of Appeals on Tuesday tossed out a California law banning privately owned immigration detention facilities, saying it interfered with federal powers. Gov. Gavin Newsom signed the law in 2019 as part of a broader campaign to limit state cooperation with the federal government on immigration enforcement. But it cannot stand, Judge Kenneth Lee wrote, because "it bars the Secretary [of Homeland Security] from doing what federal immigration law explicitly permits him or her to do.” Politico | A.P. 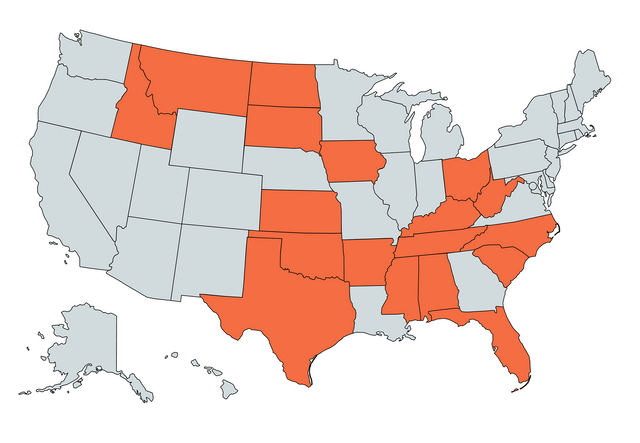 Created by the California Sun with MapChart

☝️ In this map, the orange states are all of those to which California now prohibits state-funded travel. Since 2016, when California lawmakers restricted travel to states deemed discriminatory to LGBT people, the number of targeted states has ballooned to 18, encompassing an area home to more than a third of the nation's population. According to a Sacramento Bee analysis, all of the states on the travel ban list supported Donald Trump in 2020.

Since adopting a Covid-19 vaccine mandate on Aug. 2, the inoculation rate of Kaiser Permanente's workforce has risen from 78% to more than 92%. But more than 2,200 workers have remained defiant. On Tuesday, the Oakland-based health system said all of those workers had been suspended. They now have until Dec. 1 to get in line or be fired. Similar showdowns are unfolding at medical facilities across California. Mercury News | Sacramento Bee 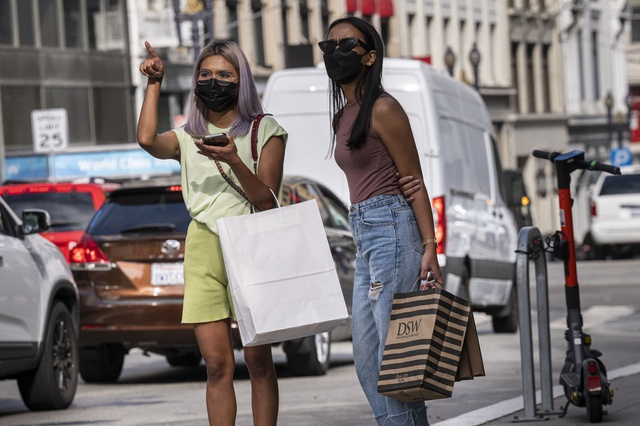 Shoppers in San Francisco on Sept. 16.

On Feb. 10, Juliana Ramos, a 26-year-old nurse and mother of three, pulled over along Highway 99 outside Fresno to help a crash victim. As she ran out, a passing SUV fatally struck her. The driver briefly stopped, but then sped away without rendering aid. After an agonizing eight months, the authorities on Monday arrested a suspect: a 68-year-old cardiologist from Sonora named James Comazzi. KFSN | Fresno Bee 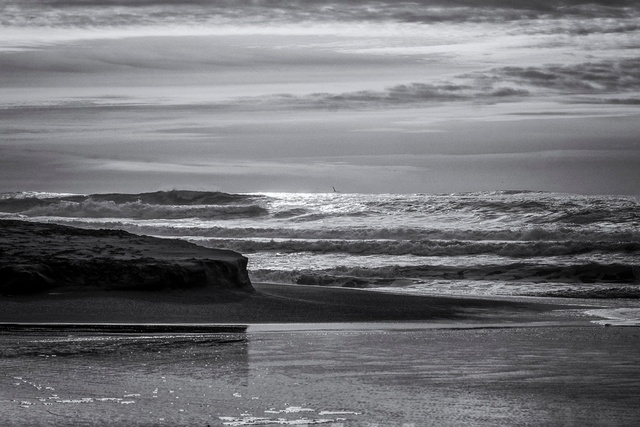 Salmon Creek Beach was the site of a shark attack on Sunday.

A Sonoma County surfer bit by a shark over the weekend recounted the attack from his hospital bed on Tuesday. Eric Steinley was waiting for a wave when the shark lunged from below, chomping down on him as many as three times. Steinley managed to wrestle away and paddle to shore, where other surfers quickly used a surfboard leash as a tourniquet on his badly injured leg and summoned help. He was lucky to survive. “I want to make sure everyone knows how thankful I am,” he said. Press Democrat

Last Friday, the Golden State Warriors' Andrew Wiggins got vaccinated against the coronavirus, but he wasn't happy about it. In candid remarks Monday night, Wiggins said he had no choice. "I guess to do certain stuff, to work and all that, I guess you don’t own your body,” he said. “That’s what it comes down to. You want to work in society today, I guess they make the rules of what goes into your body and what you do.” He said the rest of his family remains unvaccinated. S.F. Chronicle | ESPN 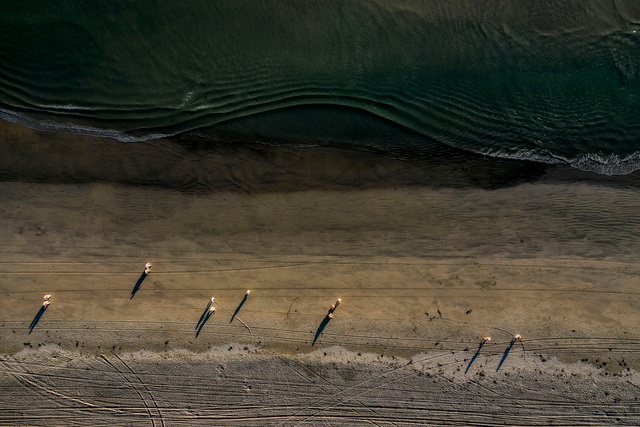 A crew picked up chunks of oil in Huntington Beach on Tuesday.

The Coast Guard acknowledged on Tuesday that it did not investigate for nearly 10 hours after the first call came in Friday evening about a possible oil spill off Orange County. The agency defended the delay, saying it was following procedure and that spills can be difficult to detect at night. Experts say every minute counts when responding to oil slicks because floating barriers can be used to limit the harm to coastal habitats. Voice of OC | L.A. Times

The pipeline operator also appeared to have been flat-footed. According to a government report, Amplify Energy Corp. took more than three hours to shut the oil pipeline after being alerted that something was awry. Investigators believe a ship's anchor snagged the pipeline, dragging it more than 100 feet across the seabed. It was unclear why workers on the rig waited as thousands of barrels of oil leaked into the ocean. Bloomberg | O.C. Register

Riverside County Sheriff Chad Bianco acknowledged on Tuesday that he was member of the Oath Keepers after a whistleblower site revealed that he had paid dues to the group in 2014. “I’m not ashamed of what I did in 2014,” Bianco said. The Oath Keepers played a key role in the storming the U.S. Capitol on Jan. 6. The Anti-Defamation League has described the organization as "heavily armed extremists with a conspiratorial and anti-government mindset looking for potential showdowns with the government." Desert Sun | Press-Enterprise 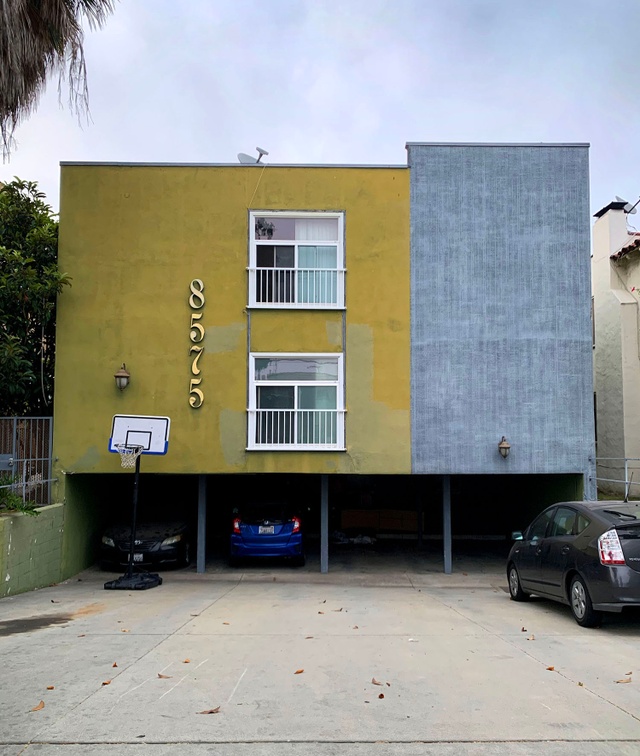 In the 1950s and 60s, Southern California developers crammed lots with aggressively economical two- or three-story apartment complexes. With little room left outside, they included exposed carports beneath the second floor. Known as dingbats, they became regarded as both blight and beauty. Bloomberg published a great piece on the lessons that the stucco boxes offer for our 21st-century housing crisis: "The first of those lessons might be that aesthetics aren’t everything." 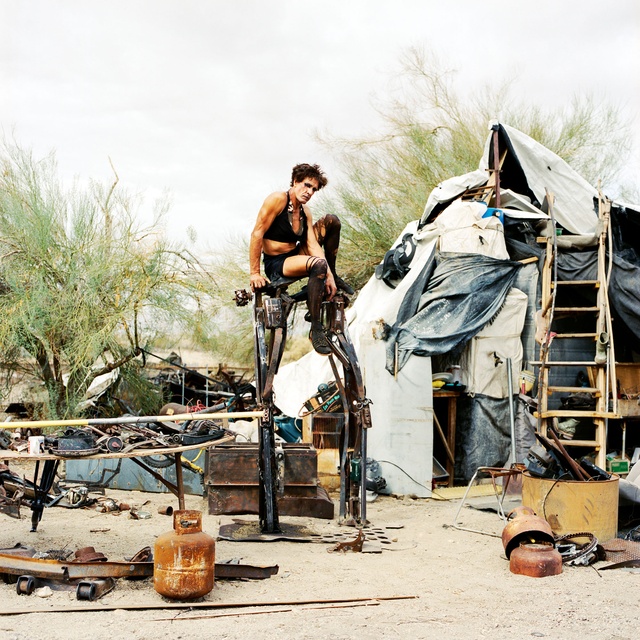 Deep within the Sonoran Desert, beyond Palm Springs and the Salton Sea, is one of the poorest places in America. The squatter community known as Slab City scratches out a hand-to-mouth existence on an abandoned military base. The photographer Daniel Skwarna declared it both "America the Great and the toxic end-product of American capitalism." A photography magazine selected Skwarna's brilliant Slab City series as a 2021 Critics Choice winner. LensCulture | Dodho