Gov. Gavin Newsom said new modeling projected that California needs 50,000 additional hospital beds to meet an expected surge of coronavirus patients. Many of those are to be added at current hospitals and three new facilities. But even with those, the state would be 17,000 beds short. Also needed: 1 billion gloves and hundreds of millions of masks. "It's going to take a heroic effort," Newsom said. N.Y. Times | L.A. Times | A.P.

Nurses at an Oakland hospital treating exposed patients said they have been asked to reuse disposable medical equipment, including masks and eye protection, endangering themselves and other patients. "Without widespread testing," one said, "there's no telling how many of us are going to silently pass Covid around." The Intercept

How you can help. 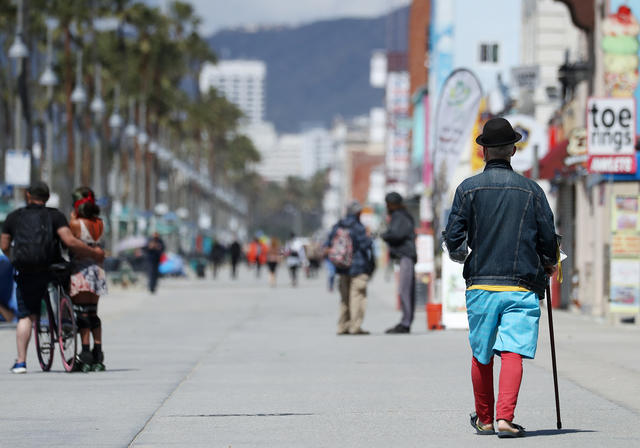 A man walked on the Venice Beach boardwalk on Monday.

Gov. Gavin Newsom had hoped social pressure would suffice to enforce his statewide stay-home order. Now he's shutting things down. On Monday, dozens of parking lots at state beaches and parks were marked for closure — with more likely to follow. A recreation official in Los Angeles — where trails, parks, and beaches have been closed — said it was a shame: "Our whole mission as an agency is to provide open space for the public especially in times of stress, but people are putting everyone at risk." Ventura County Star | A.P.

Park goer in San Francisco: "I'm like prime age, you what I mean? Like not a lot of people my age are dying." KRON 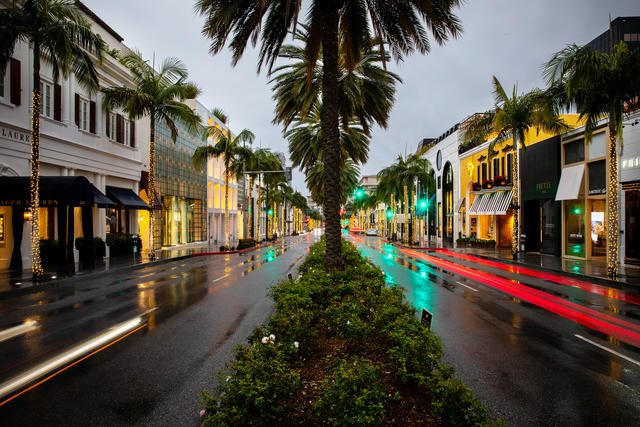 Rodeo Drive in Beverly Hills was empty over the weekend.

That's how many jobs could be lost in California by the summer, according to an analysis by the Economic Policy Institute, a think tank. Already the daily average number of unemployment insurance claims in California has soared to 106,000 over the last week. The normal average? 2,500. Sacramento Bee | SFGate.com

A few of the reports of job losses from across the state:

Even as President Trump questioned whether stay-home orders have gone too far, Gov. Gavin Newsom suggested California was in it for the long haul. "We are looking at the next eight weeks, on our curve, maybe the next eight to 12 weeks, to address this surge," he said. Mercury News

San Francisco public health chief: "I am sad to have to say the worst is yet to come." SFGate.com

On a call with White House officials, the police chief of Vacaville delivered a pointed message: "Stop testing NBA players, and start testing our first responders." Referring to reports of tests of players including Kevin Durant and two Lakers players, Chief John Carli said he had to rely on back channels to procure tests for first responders possibly exposed to the virus. He added: "We're gonna lose our first responders." ABC News

Coronavirus tests are hard to get — unless you have money, fame and the right doctor. L.A. Times 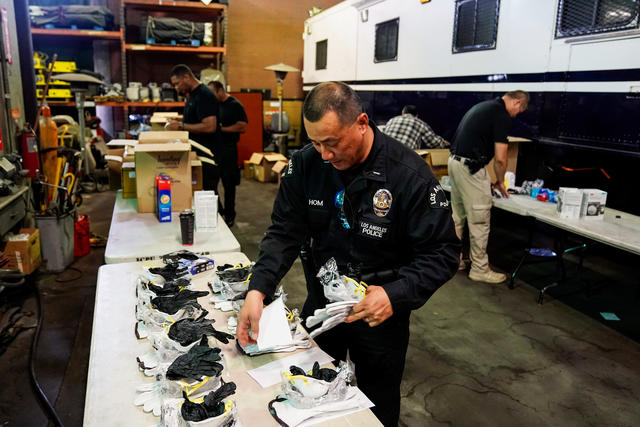 Two high schoolers along the Central Coast, at least eight LAPD officers, and the top health officer in Marin County. Here are the latest coronavirus totals, according to the S.F. Chronicle and N.Y. Times: 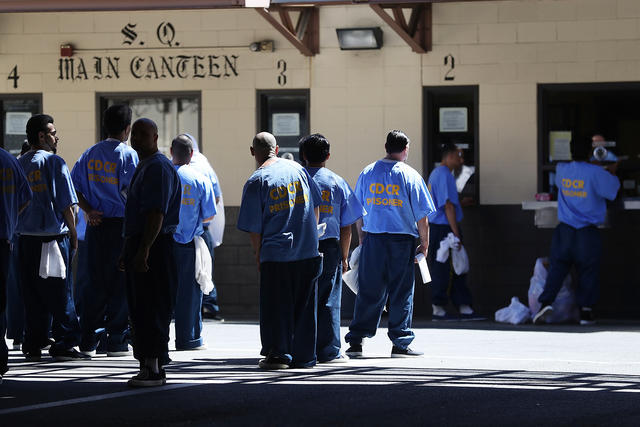 Inmates at San Quentin waited in line at the canteen in 2016.

Not only are police arresting fewer people, jails have been letting hundreds of inmates go in counties across the state, among them Los Angeles, Kern, Alameda, and Sacramento. Now that several coronavirus cases have emerged within California's massive prison system, pressure is increasing to release many more. A.P.

Former head of prisons: "It's a tinderbox of potential infection." KQED

The columnist Frank Shyong checked in with a number of Asian Americans across the state to see how they were holding up in a climate of xenophobic fear. They described being accosted, shunned, and bullied. It's too much, one woman told him. "I tell her I agree, it is too much, it's not fair. But there's nothing else to say, so I don't say anything, and for a minute, we're just on the phone, crying together." L.A. Times

Pacific Gas and Electric said it had agreed to plead guilty to 84 counts of involuntary manslaughter in the deadly 2018 Camp Fire, the state's deadliest wildfire. The Chronicle said the step amounted to one of the greatest corporate admissions of criminal liability in American history. California regulators determined last year that PG&E's equipment caused the fire. S.F. Chronicle | N.Y. Times 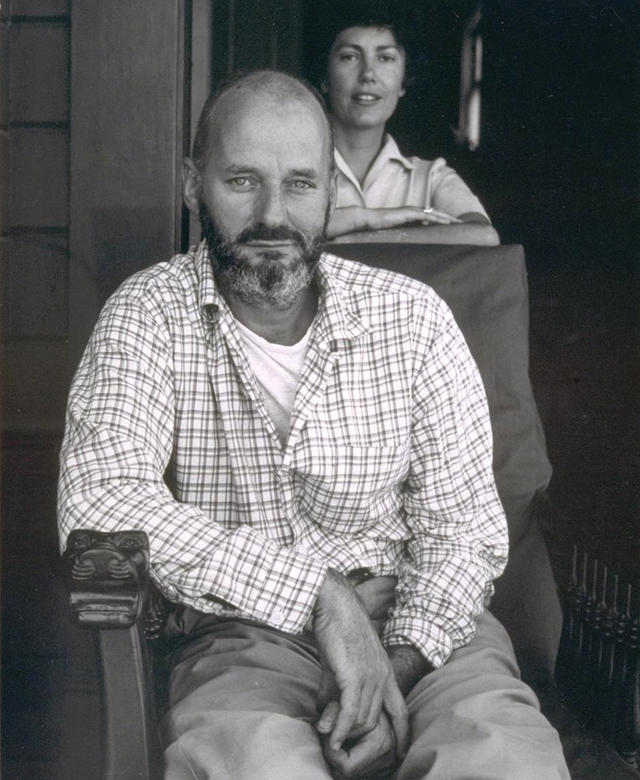 Lawrence Ferlinghetti, with his wife, Kirby, in San Francisco in 1959.

Lawrence Ferlinghetti turns 101 years old today. Born in Yonkers in 1919, he was drawn to San Francisco and its radical traditions in his early 30s, becoming the city's de facto poet laureate for the next seven decades.

Arguably his greatest contribution: the City Lights Bookstore, which he opened on a tiny block in North Beach in 1953 in a bid to rescue literature from the ivory towers of academia and deliver it to the masses.

City Lights became a haven for the Beats and other writers, and survived an obscenity trial in 1957 after publishing Allen Ginsberg's "Howl." Its funky warren of rooms included sections with names such as "Anarchy," "Muckraking," and "Stolen Continents" (where American history could be found). 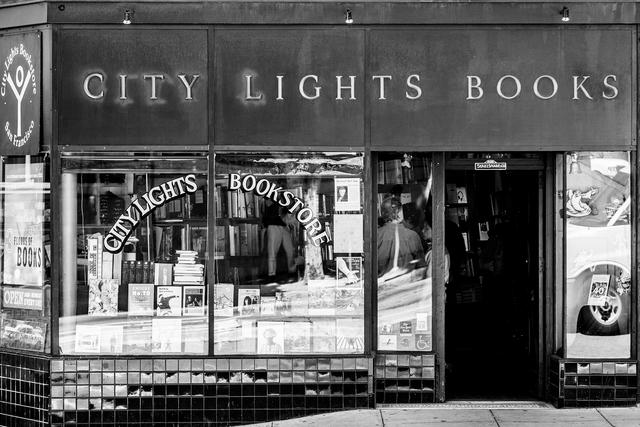 City Lights Bookstore is as quintessential to San Francisco as Coit Tower.

The shop belonged to a grittier version of San Francisco, before the tech boom and the juggernaut of online retail. Yet it has somehow survived for 67 years, open till midnight seven days a week — and with its revolutionary zeal intact. "It at once embodies the spirit that turned America on its head in the 1950s and invigoratingly carries it into a new generation," the novelist Pico Iyer wrote in 2014.

Last year, the N.Y. Times book critic Dwight Garner used the occasion of Ferlinghetti's 100th birthday to take a pilgrimage through old-school San Francisco, pausing at those places where the spirit of the Beats still lingers.

His first stop was City Lights, which Garner declared "pound for pound" the best bookstore in America. "It's so dense with serious world literature of every stripe, and so absent trinkets and elaborate bookmarks and candles and other foofaraw, that it's a Platonic ideal," he wrote. "It can inspire, even in jaded bookstore-goers, something close to religious awe."