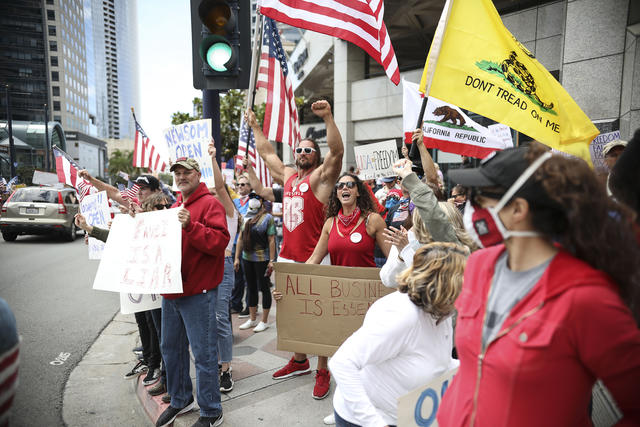 Demonstrators held a "Freedom Rally" in San Diego on Saturday.

Protesters spilled onto the streets of San Diego, Encinitas, San Clemente, and other places between Friday and Sunday to demand the reopening of the state. Maga gear and American flags abounded amid the tightly packed crowds in which most people went without masks. Signs included "Give me liberty or give me death," "Defy fascist lockdown," and "Covid-19 is a lie." NBC San Diego | O.C. Register | L.A. Times

Sobering assessment based on interviews with 20 experts: "If Americans pour back out in force, all will appear quiet for perhaps three weeks. Then the emergency rooms will get busy again." N.Y. Times

A study based on an analysis of blood from 3,300 people in Santa Clara County concluded that coronavirus infections were up to 85 times more common than official figures indicated. The research, which hasn't been peer-reviewed, has been interpreted to indicate a much lower death rate from Covid-19 — closer to seasonal influenza — than earlier estimates. It also suggests we may be nearer to herd immunity. The Guardian | Nature

For the first time since the pandemic hit U.S. shores, a whole town will be tested for the coronavirus: Bolinas. A favored outpost of tech multimillionaires, the beach community in Marin County raised funds to test all 1,680 of its residents in partnership with UCSF. A doctor on the project defended the choice: "Wealthy people? Whatever," she said. "It's a motivated community." Mercury News | S.F. Chronicle

The U.S. and South Korea confirmed their first infections around the same time. Yet the cafes are bustling in Seoul, a city with 18 new cases as of Friday. The secret? Mass testing. Bloomberg 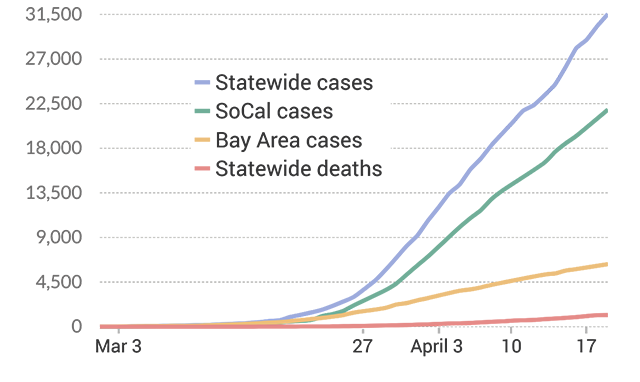 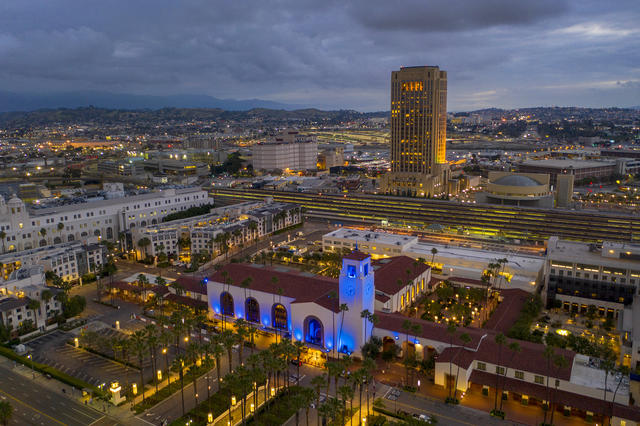 Los Angeles Union Station was lit up in tribute to health care workers on Saturday.

"Our city is under attack."

Mayor Eric Garcetti of Los Angeles choked back tears Sunday during a remarkable State of the City address during which he announced that the city would furlough thousands of workers for 26 days. "From a fiscal perspective," he said, "this is the worst it's ever been." L.A. Times | LAist

What lessons can be drawn from California's handling to the 1918 influenza pandemic? San Francisco went mask crazy, while Los Angeles shut down early and stayed closed longer. But both made a common mistake: They relaxed too soon, unleashing second waves of infections that killed more people than the first wave in other cities. L.A. Times

One positive side effect of sheltering in place: A plunge in traffic accidents. A U.C. Davis study found that California taxpayers have saved about $40 million a day — or roughly $1 billion since March 20 — as vehicle collisions have fallen by more than half. SFGate.com | L.A. Times

Elon Musk has been sparring with CNN over a report that he failed to deliver on a pledge to deliver 1,000 ventilators to California hospitals. On Twitter, Musk questioned how CNN exists. Here's what happened: Musk sent breathing machines, but not the high-end ventilators most in need. Even so, hospitals have been grateful to receive them. "They won't help the sickest patients, but did help free up some of the advanced ventilators to those who need them the most," one hospital official said. Bloomberg 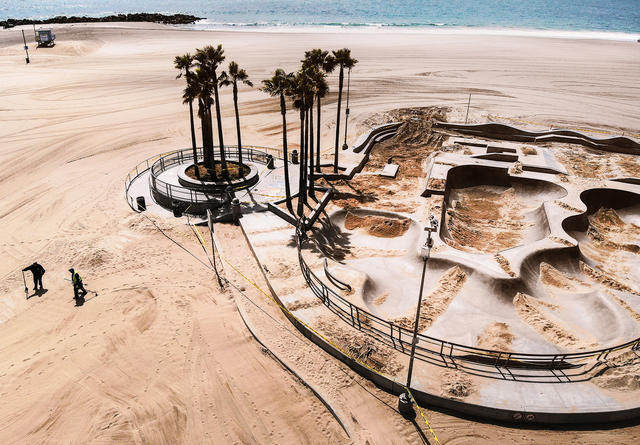 Venice Skate Park was filled with sand to deter skaters.

The mayor of Auburn, a small town in the foothills northeast of Sacramento, died in a plane crash over the weekend. Bill Kirby, a urologist, was in the news last week after he shared a Facebook post comparing Trump supporters to members of the Ku Klux Klan. An ensuing outcry led him to announce that he would step aside as mayor. Sacramento Bee | Auburn Journal 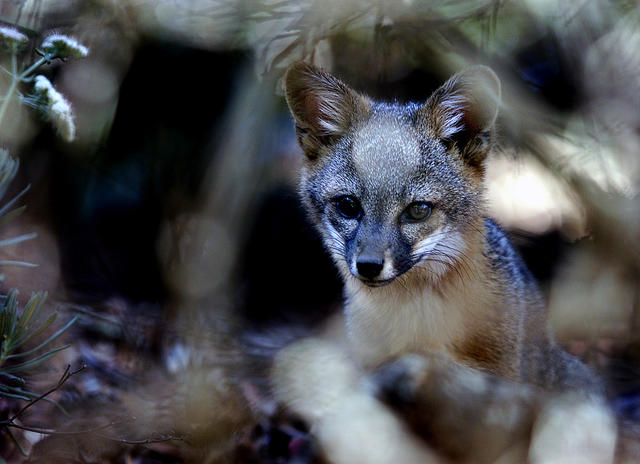 Island foxes are curious and playful with pointed noses and rust-colored fur.

The adorable island fox is the only carnivore unique to California. Native to the Channel Islands, they were very nearly wiped out by predators by the early 2000s. National Geographic recounted the gripping tale of how ecologists brought the pointy-nosed foxes back from the brink. Crucial to their success: fending off animal rights activists and killing 5,036 feral pigs. National Geographic

They look like they could be fossilized dinosaur vertebrae. Or perhaps the architecture of some ancient Roman ruin.

The Crowley Lake columns rise as high as 20 feet from the fringes of an artificial reservoir in the Eastern Sierra. But their perfectly cylindrical shape, evenly spaced grooves, and high arches were crafted not by hand but geological forces dating back 760,000 years. Scientists believe the pillars formed as water seeped through a vast layer of volcanic ash, creating something akin to natural pipes that hid underground for eons until being exposed by the lapping waves of the reservoir, completed in 1941.

The resulting interplay of symmetry and light amid the formations led the geologist Robin Wham to lapse into some non-scientific language when discussing them with the L.A. Times. "They are kind of magic," she said. Atlas Obscura | L.A. Times

Below, a few pictures. 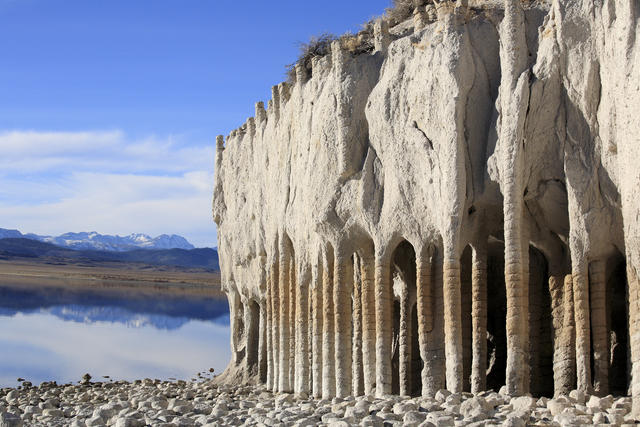 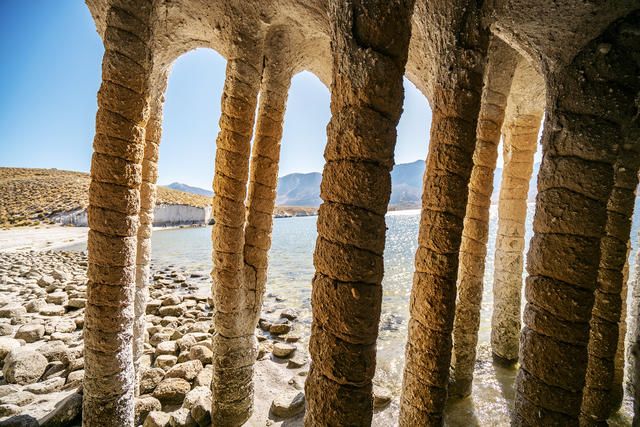 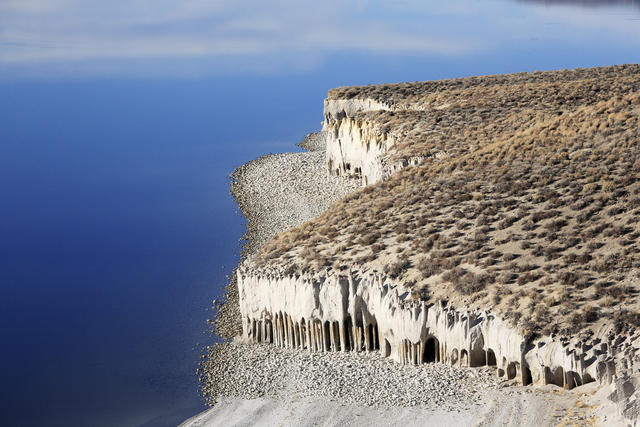