Californians will vote on whether to restore affirmative action on Nov. 3 after the state Senate approved the ballot measure. In 1996, voters approved a ban against preferential treatment on the basis of race or sex in public education and employment. But much has changed. Back then, Republicans ruled government and California was majority-white. Today, Democrats dominate every statewide office, and Latinos have surpassed whites as the state's largest ethnic group. A.P. | EdSource 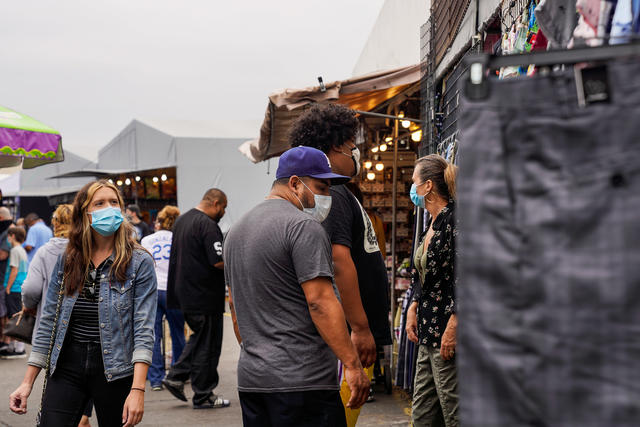 Shoppers milled about a swap meet in Santa Fe Springs on Saturday.

California once again shattered its record for daily coronavirus cases, with more than 7,100 added infections. At the start of June, roughly 2,000-3,000 daily totals were common. Gov. Gavin Newsom said Californians were letting down their guard. “I’m not naive,” he said. "People are mixing. We are spreading this virus. It is our behaviors that are leading to these numbers.” L.A. Times | The Guardian

Newsom has rejected calls to halt the state's reopening. But he delivered a warning to those local officials who continue to defy safety measures: Keep it up and see your state aid dwindle. “There are some that have made rhetorical comments about not giving a damn," he said. “That’s exactly why I look forward to signing this budget that will afford me a little bit of leverage in that conversation.” S.F. Chronicle | A.P. 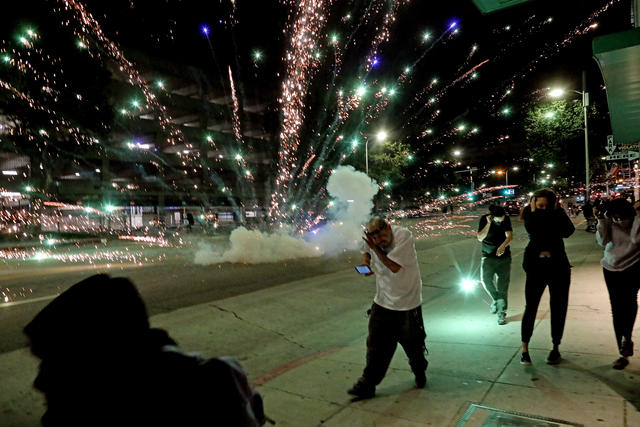 A firework was ignited during protests in Los Angeles on May 29.

It's not unusual for fireworks to increase in the weeks before Independence Day — but this summer has been off the hook. Sleep-deprived residents in Oakland said it feels like the Fourth of July every night. A petition in Silver Lake is demanding police action. A popular conspiracy theory holds that the police are doing it to disrupt Black Lives Matter. A pyrotechnics expert pointed to a simpler explanation: A nation full of young people fed up with quarantines. A.P. | SFGate.com | L.A. Times 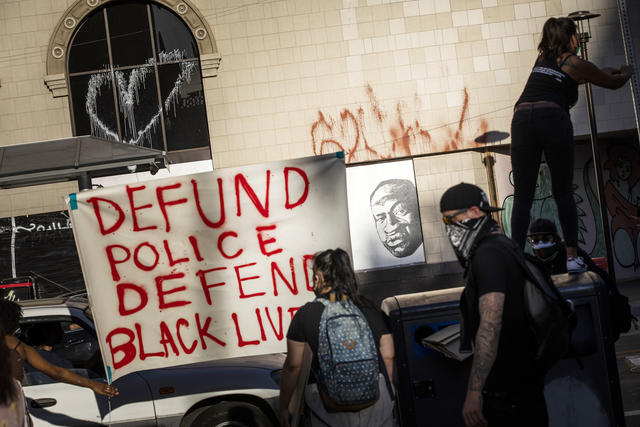 Demonstrators hung a sign in Oakland, where calls to defund the police have mounted.

When Oakland Mayor Libby Schaaf took office in 2015, she pledged to boost the police force by 800 officers in a city battered by violence. Five years later, amid mounting calls to defund the police, the politics of law and order have shifted. On Wednesday, the City Council voted to slash the police budget by $14 million, with several members aiming to eventually cut spending by half. The Oaklandside | S.F. Chronicle

Oakland Unified School District has its own police force. The board just voted to eliminate it. East Bay Times | KPIX 5

A judge ruled that Rep. Devin Nunes can't sue Twitter over statements by a fake internet cow. The Central Valley Republican had accused the company of defamation and negligence after being made fun of by parody Twitter accounts. But the judge said federal law protects social media companies against litigation over what people post on their platforms. Fresno Bee | Washington Post 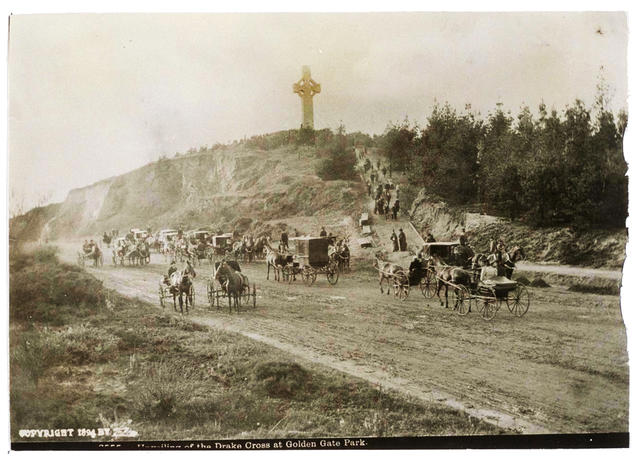 The dedication of Drake’s Cross in 1894. A historian called it a "monument to white supremacy."

Rising 60 feet in Golden Gate Park is Drake’s Cross, a monument commemorating the English explorer Francis Drake. It has so far escaped notice in the debates around contentious symbols. But the cross was erected by Episcopalians in 1894 to enshrine Anglo-Saxonism, a late-19th-century variant of white supremacy, writes the historian Richard White. N.Y. Times 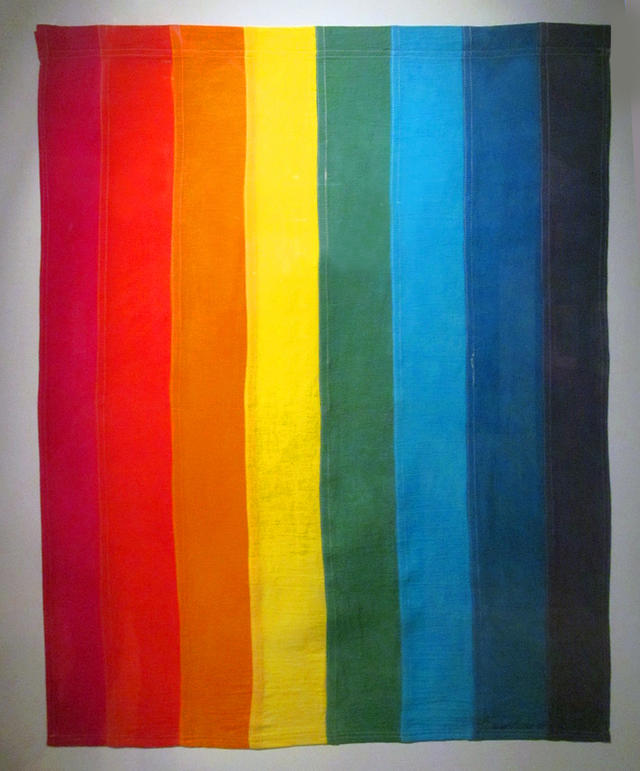 👆Here’s the original eight-striped rainbow flag, on display last year at the Oakland Museum of California.

It was on this day in 1978 that the flag first flew in a gay pride parade in San Francisco. The gay rights leader Harvey Milk and others had asked Gilbert Baker, who was known for his creative talents, to create an emblem that could promote their movement. So Baker dipped eight strips of fabric into trash cans filled with dye and stitched them together. Later versions of the flag were reduced to six.

Upon its debut, Baker sensed something special was happening. “It completely astounded me that people just got it, in an instant like a bolt of lightning — that this was their flag,” he wrote. “It belonged to all of us. It was the most thrilling moment of my life.” Baker, who died in 2017, refused to apply for a trademark. It was his gift to the world. CNN | dwell 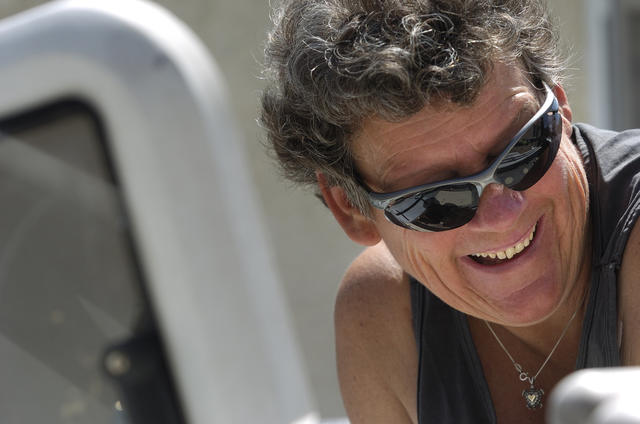 Angela Madsen became a three-time Paralympian after sustaining an injury in the military.

Angela Madsen, a Paralympic rowing star from Long Beach, set off from Marina del Rey in April in a 20-foot rowboat with the goal of reaching Hawaii within four months. She would have become the first paraplegic, first openly gay athlete, and oldest woman to row solo across the Pacific Ocean. Instead, Madsen died at sea about halfway to her destination. She was 60. Long Beach Post | The Guardian

Disneyland has reconsidered its plan to reopen on July 17. On Wednesday, the company announced that the park would stay closed indefinitely. It blamed California for dragging its feet on reopening guidelines. But Disneyland has faced severe criticism from park employees and others for what they said was a dangerous rush. Hollywood Reporter | A.P. 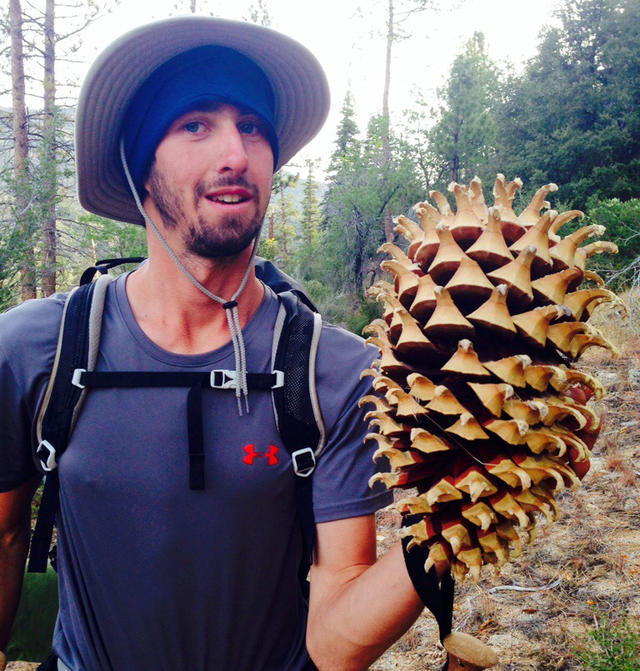 A hiker presents a Coulter pine cone along the Pacific Crest Trail.

Native to the coastal mountains of Southern California, the Coulter pine produces the world's largest pine cones — growing up to 16 inches long and weighing up to 10 pounds. They're also equipped with sharp, curving scales. When a cone breaks loose from 70 feet above the ground, the threat of head injury is no joke. Hence their nickname among locals: "widowmakers." Calscape