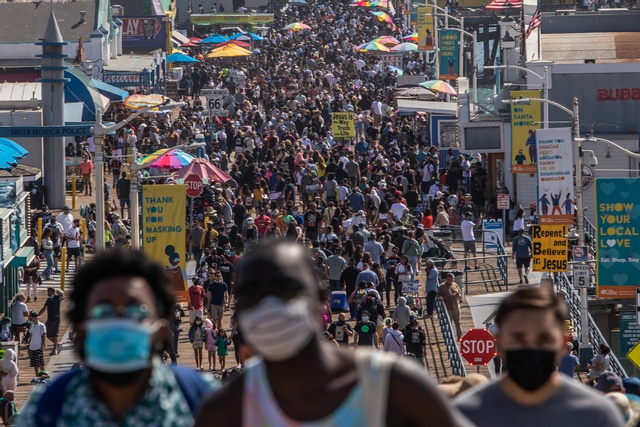 Crowds at Santa Monica Pier on May 29.

An agonizing 15 months after Gov. Gavin Newsom ordered Californians to isolate in their homes "until further notice," the state today officially goes back to normal — mostly. Here are highlights of what's changing, with the caveat that local governments and business can still set tougher restrictions: 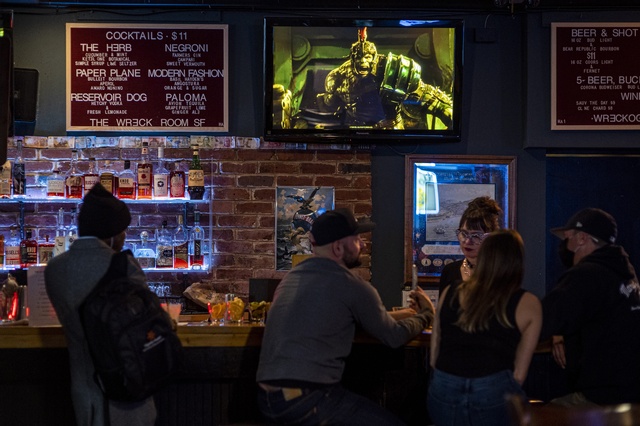 Bar patrons in San Francisco, where vaccination rates are high and cases numbers are low.

A Washington Post analysis found that coronavirus cases are markedly falling in places where people are vaccinated, and rising where they are not. An x-y graph with variables of case rates and vaccination rates placed California, where 72% of adults have gotten at least one dose, firmly within the "more vaccinations, fewer cases" quadrant.

NBC News: "Virtually all hospitalized Covid patients have one thing in common: They're unvaccinated."

“They’re immediately one paycheck away from homelessness.”

New research showed how the coronavirus has attacked Hispanic Americans in an especially insidious way: They have died at younger ages than people from other racial or ethnic groups. It led their families to experience a very different pandemic as income streams and support networks unraveled. The N.Y. Times told the story of one family's grief in Santa Clara County.

“By adding 1.3 million people to its non-farm payrolls since April last year — equal to the entire workforce of Nevada — California easily surpassed also-rans Texas and New York. At the same time, California household income increased $164 billion, almost as much as Texas, Florida and Pennsylvania combined, according to data compiled by Bloomberg. No wonder California's operating budget surplus, fueled by its surging economy and capital gains taxes, swelled to a record $75 billion.”

☝️ This eye-opening animation shows U.S. Drought Monitor maps from January of 2000 to the present month.

A climate scientist at the Union of Concerned Scientists offered a point of comparison: In June of the second year of the last drought, which began in 2012, none of California was experiencing "extreme drought." Right now, in the second year of the current drought, 85% of California is experiencing "extreme drought" or worse. And the hottest months are still to come.

It's going to be so hot this week that doctors who work in burn centers warned people to be careful touching hot pavement. Excessive heat watches and warnings were issued throughout California as forecasters predicted temperatures along parts of the coast in the upper 90s along with broiling heat in the Sacramento, San Joaquin, and Coachella valleys as high as 120 degrees. Grid operators asked people to conserve energy. Accuweather | L.A. Times | S.F. Chronicle 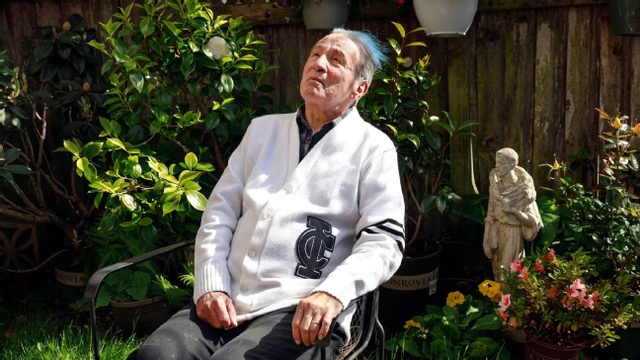 Tom Ammiano in his letterman sweater.

As a high school student in 1950s New Jersey, Tom Ammiano was denied a varsity track letter by a teacher who had bullied him with anti-gay rhetoric. Ammiano went on to become a prominent activist and politician in San Francisco. The letter became ancient history. But then, 63 years later, someone finally stood up for him. Here's a touching short documentary about how Ammiano finally got his varsity letter. ESPN (~7 mins)

Kings Canyon cuts a swath through the Sierra range deeper than the Grand Canyon, measuring as much as 8,200 feet from river to rim. Amazingly, you can drive right through it. The Kings Canyon Scenic Byway is the only vehicular route to penetrate the national park, snaking about 40 miles along progressively more stunning views of granite cliffs, giant sequoias, and the roaring south fork of the Kings River. The terminus is aptly named Road's End, which sends motorists around a short loop back the way they came. For backcountry hikers, it's just the start of another adventure on foot. 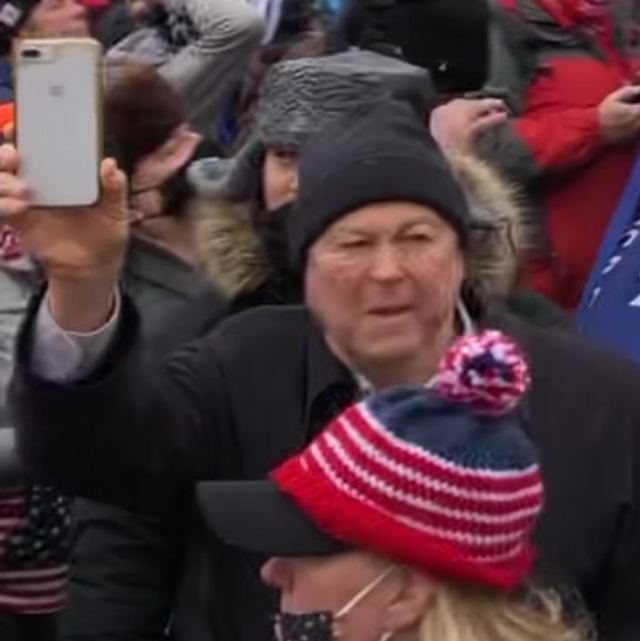 Dana Rohrabacher was seen at the Capitol on Jan. 6.

Newly released video showed that Dana Rohrabacher, a former Orange County congressman, breached the police barricades outside the U.S. Capitol on Jan. 6, making him the highest profile politician known to be on the grounds that day. “I marched to protest," the Republican told the Portland Press, "and I thought the election was fraudulent and it should be investigated.” Weeks before the siege, Rohrabacher told a "Stop the Steal" rally in Huntington Beach that communists were trying to take over the country. Press Herald | O.C. Register

The music entrepreneurs Dr. Dre and Jimmy Iovine are starting a public high school in South Los Angeles, and the district school superintendent has predicted it will be "the coolest school in America." The men, both reportedly billionaires, admitted to hating their own school experiences. So they've embraced a vision to excite inner city youth: “This is for kids who want to go out and start their own company or go work at a place... like Marvel, or Apple or companies like that,” Iovine said. L.A. Times | L.A. Daily News 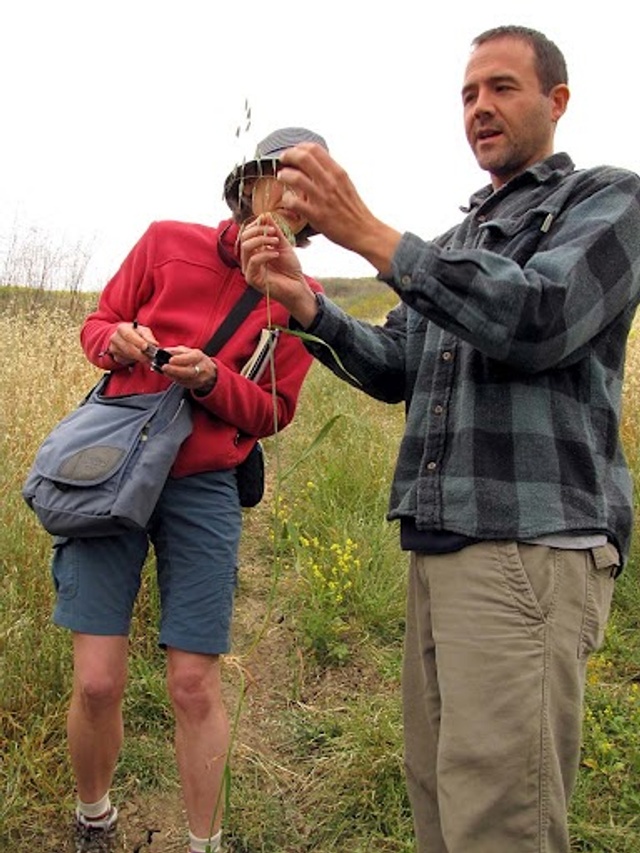 … Kevin Feinstein, an avid forager and co-author of the Bay Area Forager.

A. Some place where epic cliffs overlook the coast. There is just something about these areas that makes you feel you are at the edge of the world somehow. Beautiful forests and breathtaking hills overlooking the crashing waves of the Pacific Ocean. It's a must-see in California.

“For the Love of Paw Paws.” I'm too busy farming (and moving) lately to listen to podcasts or read much, but I am super excited about growing paw paws, and am really loving the book. They are native North American fruits that are delicious!

The food forest at the Children's Center that I created over 16 years. Although the Children's Center Garden is not open to the public, I have never been to a cooler place as far as food. It is a half-acre food forest, with "normal" and rare fruits, wild plants, herbs, wildlife, and free-range chickens and ducks. Moraga Garden Center is one of the coolest nurseries around, and the super-knowledgeable owner, Kenny, stocks lots of unusual edibles.

John Muir (the uber California naturalist), David Aurora (the king of wild mushrooms), and Steven Murray (he grows soooo many types of rare fruits as well as normal California fruit staples). I would start by saying, "California is the best state for nature and growing, don't you agree?"

How has the current drought affected the available foraging environment? Which areas in California are better positioned to withstand it, and which areas are the most vulnerable?

The drought is not as straightforward as it may seem. There is the actual lack of rainfall in certain areas (this year has been the lowest in a long time), there is the political "drought" that is used in rhetoric for various agendas, and there is the human-created drought, where people are prevented from doing drought abatement practices and there’s gross mismanagement of the forests and dumping water in the ocean.

As far as foraging areas, near the more moist coast they are likely to do better than inland areas. California naturally experiences droughts throughout its natural history. There are ways to mediate that. Allowing this to be done is the key to making it through. If agencies are intentionally or through gross neglect making it worse, then more people will be fleeing.