Scheduling note: The newsletter will pause Monday. Back in your inbox Tuesday.

At least 30 tech and health care companies got lucrative, no-bid government contracts or helped with other critical public health activities in California's fight against Covid-19, an analysis found. The vast majority have backed Gov. Gavin Newsom's political career. Critics say the reliance on Silicon Valley has come at the cost of weakening the state's public health system. “What is best for Google," a former Newsom adviser said, "is not necessarily best for the people of California.” Kaiser Health News 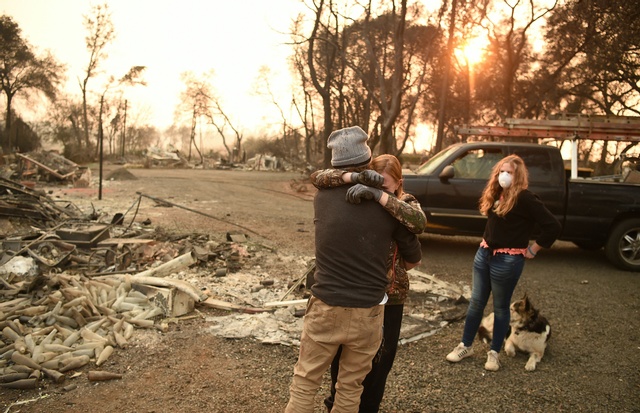 Kimberly and Ryan Spainhower hugged at their burned home in Paradise on Nov. 18, 2018.

"They're paying themselves very well."

In 2019, PG&E announced a multibillion dollar settlement deal to resolve claims associated with several Northern California wildfires. An investigation has now found that the Fire Victim Trust established to compensate survivors spent 90% of its fund on overhead in its first year of operation. Lawyers and administrators have been paid millions. The vast majority of victims has yet to see a dime. KQED 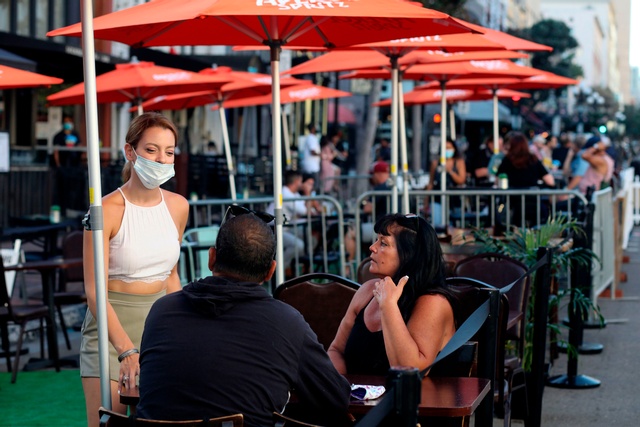 The country's restaurant industry is facing an unprecedented staffing shortage as workers have shown a reluctance to come back. In the Bay Area, dishwashers are being asked to cook, bartenders are busing tables, and owners are eliminating tables. Employees say it's not that no one wants to work: They just want wages that make the jobs worth it. Mercury News | Eater

The owner of a small bar outside Stockton was arrested this week and charged with selling forged Covid-19 vaccination cards, authorities said. Undercover agents were able to buy the phony cards at the bar for $20 apiece. Officials said it was the first such arrest in California, and perhaps the nation, making it a watershed moment in a coming fight against forgeries that could undermine the inoculation effort. KTXL | Washington Post

Human toll collectors are now a relic of the past in the Bay Area. When the pandemic started, highway officials abruptly replaced in-person collection on seven state-owned bridges with electronic systems because of the risk of contagion. Then there was no turning back. The S.F. Chronicle interviewed Sonny Hasme, a collector for 19 years who won fans among commuters by dancing in his booth. “Commuters will definitely miss the personal touch,” he said.

While exceptionally dry weather suppressed much of California's spring wildflower display this year, an extraordinarily rare super bloom has erupted along the edges of Folsom Lake just northeast of Sacramento. As the shoreline retreated, dormant seeds took the opportunity to get their moment in the sun, creating a carpet of purple lupines in areas normally inundated by water. “Who knows how long those seeds had been laying in the soil," a limnologist said. "It could be decades.” S.F. Chronicle

A drone pilot got some nice aerial views. 👉 4D ImpactMedia 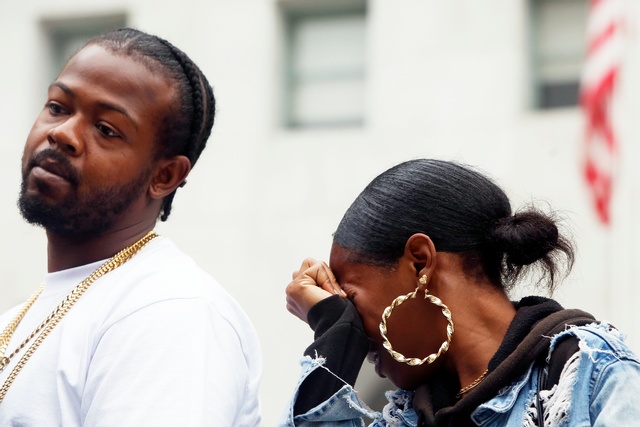 A press conference was held Oct. 20 on the death of Fred Williams III in Los Angeles. Sheriff’s officials refused to identify the deputy who shot him.

After a person is shot by law enforcement in California, their family has a legal right to know the name of the officer who opened fire. Police departments in Los Angeles, Sacramento, San Francisco, San Diego, and elsewhere in California abide by the transparency rule. But the Los Angeles County Sheriff's Department has routinely denied requests to name officers. L.A. Times

Daft Punk built its biggest hit, “One More Time," on samples from Eddie Johns' 1979 song "More Spell on You." But Johns, who battled homelessness on the streets of Los Angeles for more than a decade, never saw a dime. While Daft Punk paid royalties, the rights owner said it was unable to track Johns down. More than anything, Johns said, “I just hope I can get some credit, you know?” L.A. Times 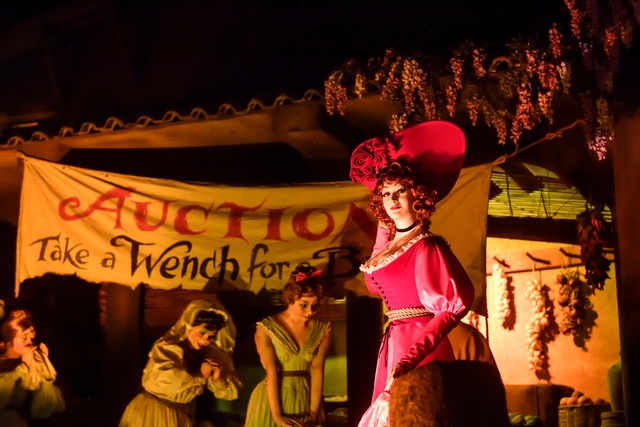 The Pirates of the Caribbean "Wench Auction" at Disneyland is no more.

First the "wench auction" was removed from the Pirates of the Caribbean ride. Then Disney said it would rework Splash Mountain to lose references to a controversial film. Most recently, the Jungle Cruise ride was updated to remove “negative depictions of ‘natives.’” Disney has tried to cast a more critical eye toward its attractions in recent years. Some fans say it's ruining the Disney experience. Washington Post

On this week's California Sun Podcast, host Jeff Schechtman talks with Michael Storper, an urban planning professor at UCLA. Storper talked about how income inequality has become so deeply embedded in Los Angeles. "The difference with us is we're expensive but we have a much bigger low-wage sector," he said, "and those two things just can't coexist in the long run. So we have to figure a way out of that." 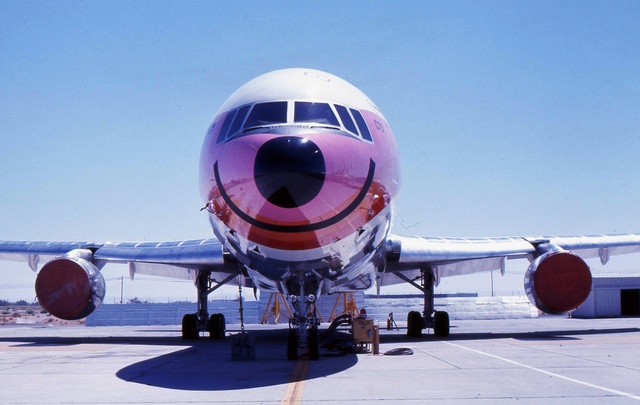 A California airline used to operate a fleet of planes with smiley faces on their noses. They called them the Grinningbirds.

Pacific Southwest Airlines, based in San Diego, was the first large discount carrier in the U.S., growing into an industry leader of intrastate flight in the 1960s and 1970s and paving the way for copycats like Southwest Airlines.

The smiles grew out of a playful corporate culture reflected in the carrier's slogan: “The World's Friendliest Airline.” PSA pilots were encouraged to joke with passengers. Stewardesses wore go-go boots and hot pink miniskirts. Martinis, at $1 each, flowed freely. 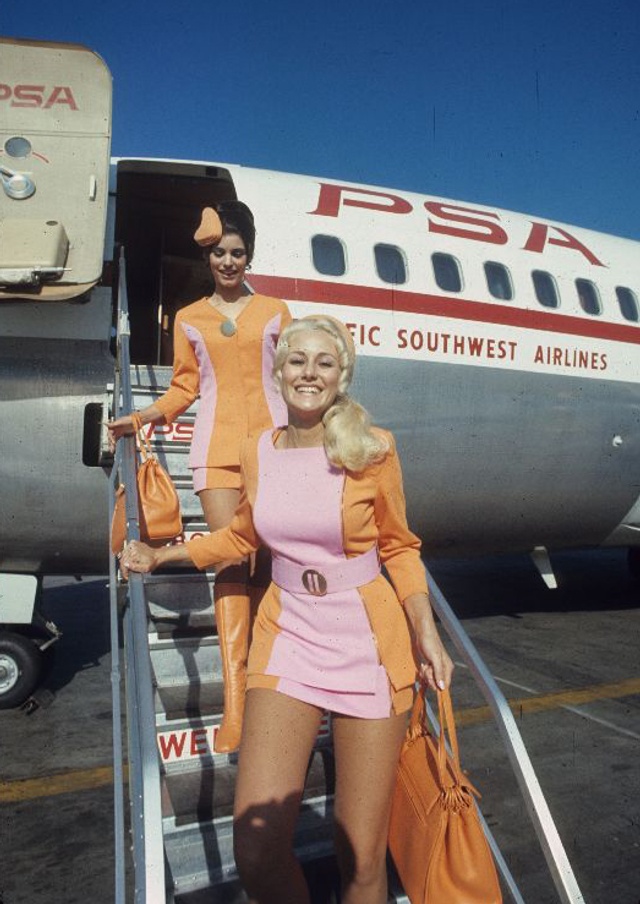 The fun-in-the-sky approach won a loyal clientele. Unimaginable today, PSA made it possible to love an airline, the L.A. Times once wrote. It "summed up everything that was groovy and freewheeling about California."

By the 1980s, rising competition began eating into PSA's bottom line. A trend of airline consolidation finally came for the company in 1988, when it was swallowed up by US Airways. The smiles faded away. From time to time, however, a mischievous mechanic has been known to add a smile to a plane in a nod to the good old days.

Below, a few more finds from the PSA photo archive: 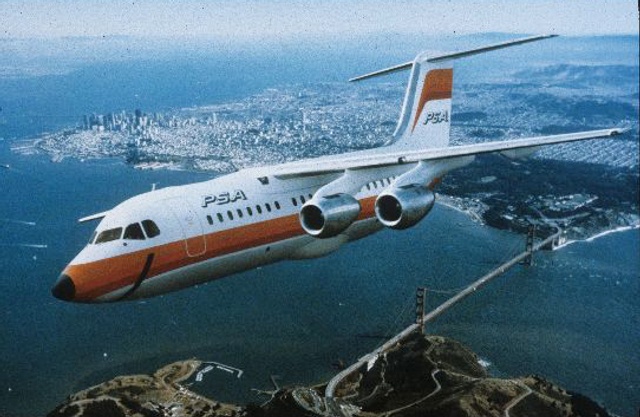 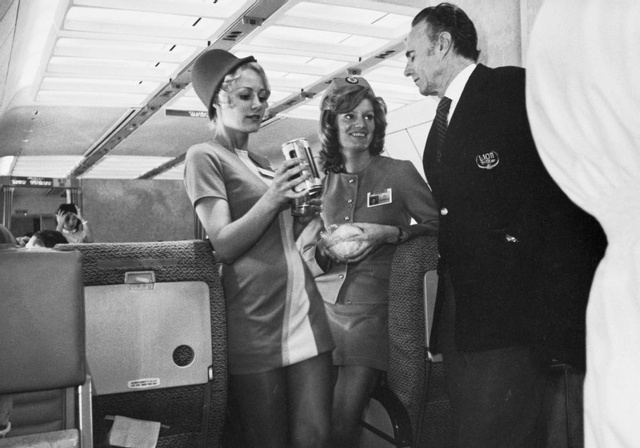 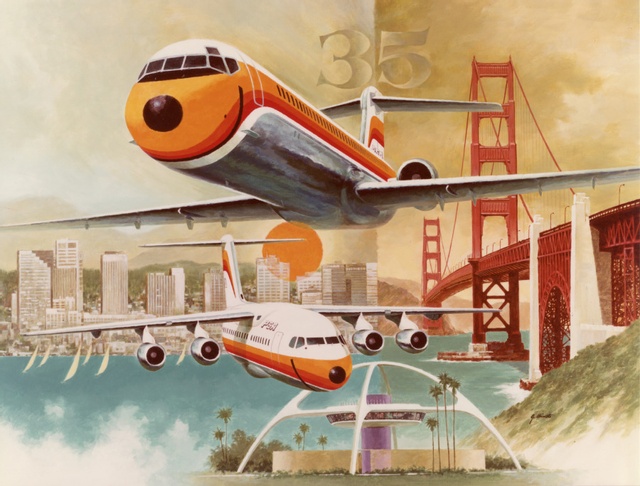 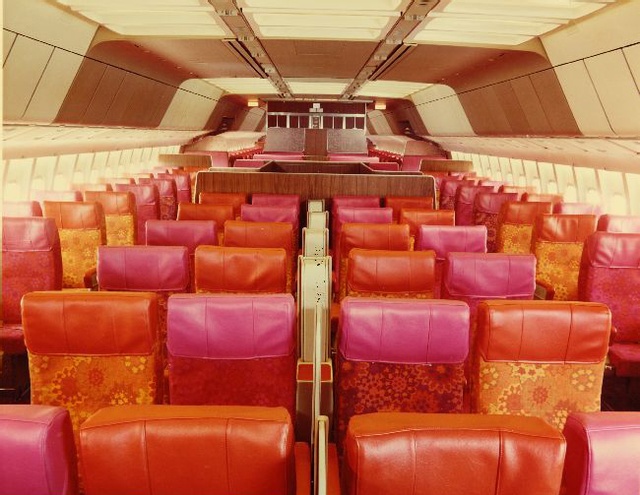 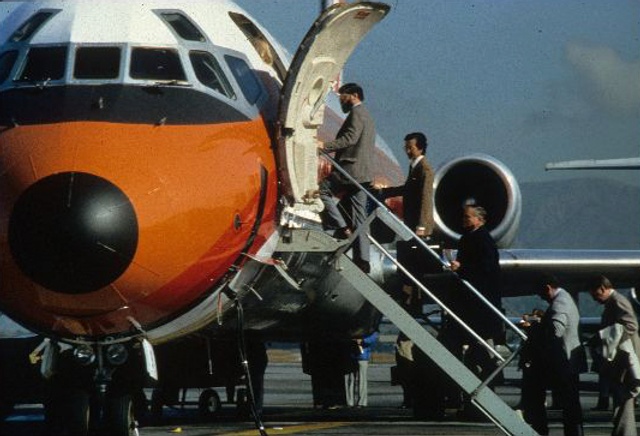 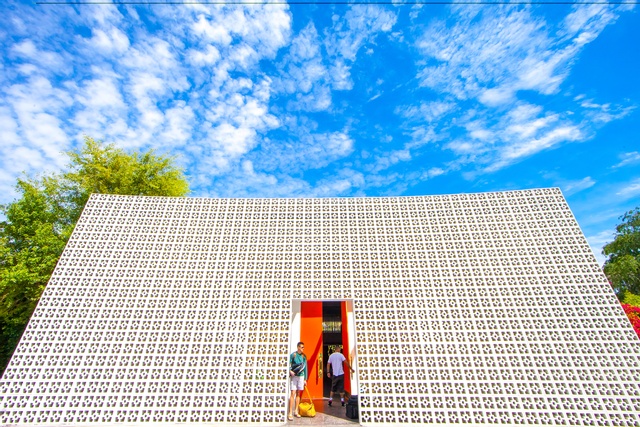