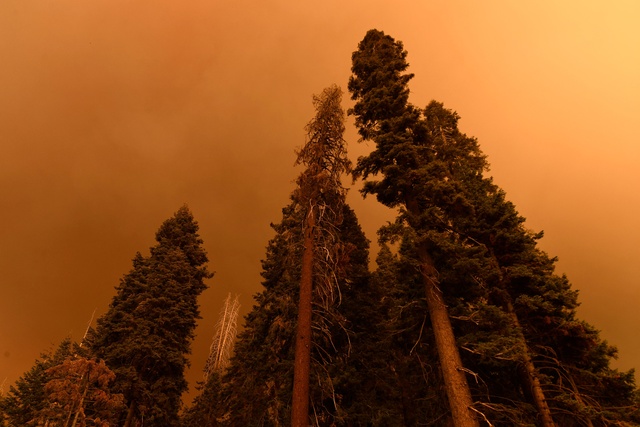 Fire moved through the Sequoia National Forest on Sept. 17.

According to the National Park Service, nearly a fifth of the world's mature giant sequoias died in wildfires over the past 15 months. The staggering estimate came as officials released a new damage assessment from the KNP Complex and Windy wildfires that tore through the southern Sierra in September, which killed between 2,261 and 3,637 sequoias greater than 4 feet in diameter. That's on top of as many as 10,600 killed in last year's Castle fire. A.P. | Bloomberg

About half of the American West's water supply originates on national forest land. But before it reaches cities or rivers, much of it is drained away by farmers, ranchers, and housing developments. While the Forest Service is supposed to protect the water, an investigation of water permit data found little evidence that the agency limits diversions, or that it even knows how much water is being taken. The result is an unchecked transfer of public water to private purposes. USA TODAY Network

While much of the world was locked down during the pandemic, two Stanford University friends planned the adventure of a lifetime: to hike three of the country's most arduous trails — the Appalachian, Pacific Crest, and Continental Divide — in a single year. This presentation on Jackson Parell and Sammy Potter's journey is really well done, with gorgeous maps and photography. 👉 L.A. Times 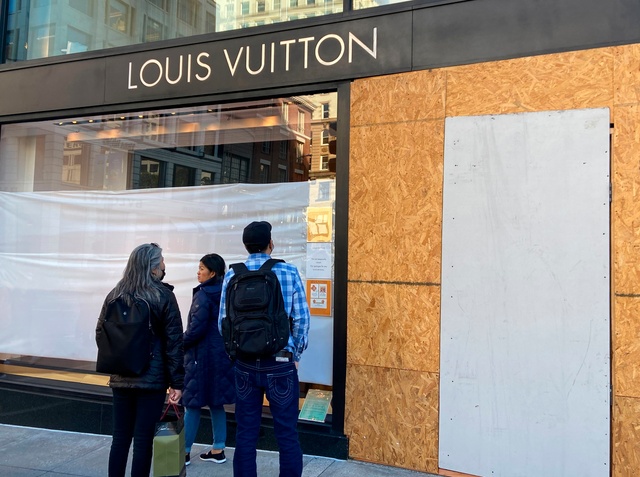 Union Square visitors looked at damage to the Louis Vuitton store on Sunday.

It was retail mayhem in the Bay Area over the weekend. On Friday night, dozens of looters ransacked high-end shops including Louis Vuitton and Yves Saint Laurent in San Francisco. Then on Saturday, roughly 80 people tore through a Nordstrom store in Walnut Creek, emptying shelves and fleeing in waiting vehicles. On Sunday, a Hayward mall was hit. While the unrest followed the Kyle Rittenhouse murder trial verdict, officials said criminals simply saw an opportunity to plunder. “It’s a lame excuse," Supervisor Aaron Peskin said. "There’s no justification.” S.F. Chronicle | CBS SF

And from Walnut Creek. 👉 @JodiHernandezTV

The Sacramento suburb of Folsom has launched a campaign to encourage retirees, stay-at-home parents, and students to work 20 hours a week at struggling business to help resolve a crippling labor shortage. Sarah Aquino, the city's vice mayor, stepped up herself as a restaurant hostess. “We figured we needed kind of a World War II-type of campaign — a combination of Uncle Sam saying 'I want you,' and Rosie the Riveter saying 'We can do it,'” she said. CBS13 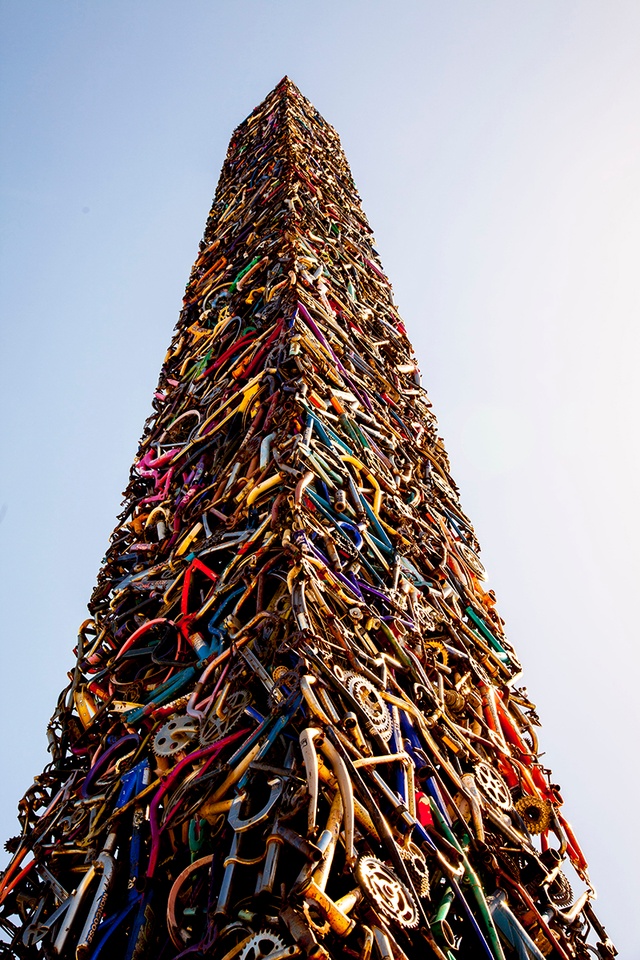 In Santa Rosa, any commercial development valued at more than $500,000 must donate 1% of the construction budget to public art. That's resulted in hundreds of outdoor artworks such as the "Cyclisk," above, a 65-foot-tall obelisk made of discarded bicycles that rises like the Washington Monument from a corner on the south side of town. It was funded, ironically, by a nearby Nissan dealership. Atlas Obscura | WIRED 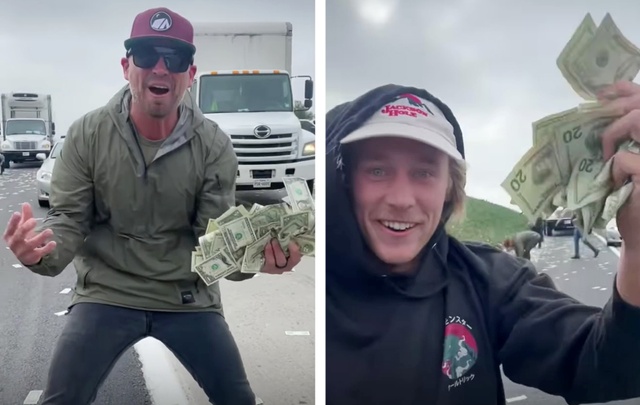 The FBI released pictures of people who picked up cash.

The police are vowing to track down motorists who jumped out of their cars to scoop up cash that fell from an armored truck on Friday on a freeway in Carlsbad. “If you found money on the freeway, it is not your money,” California Highway Patrol Sgt. Curtis Martin told reporters. “It belongs to the FDIC and this armored truck and the bank." He said police were investigating video posted to social media that showed people laughing and literally jumping for joy as they scooped up wads of cash. Washington Post | KSWB

A 13-year-old boy was struck and killed by a stray bullet on Saturday evening while playing a video game in his room in Pasadena, police said. The boy, Iran Moreno-Balvaneda, walked out of his room and collapsed in the living room, a family member told a reporter. His mother was seen waiting for an ambulance, screaming "They hurt my boy!" The boy was described as a straight-A student who loved to play soccer. Pasadena Star-News | L.A. Times

This is a view of the area around Fontana's Jurupa Hills High School in San Bernardino County in 2011. 👇 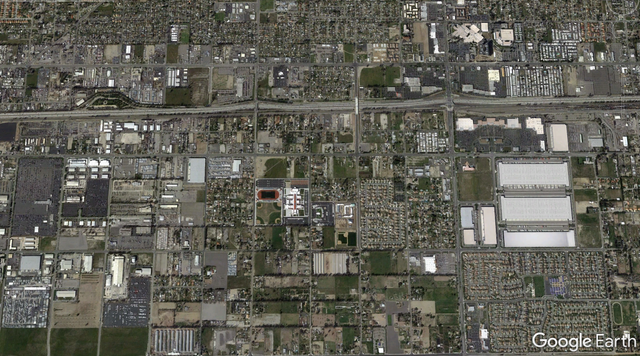 And this is the same area today. 👇 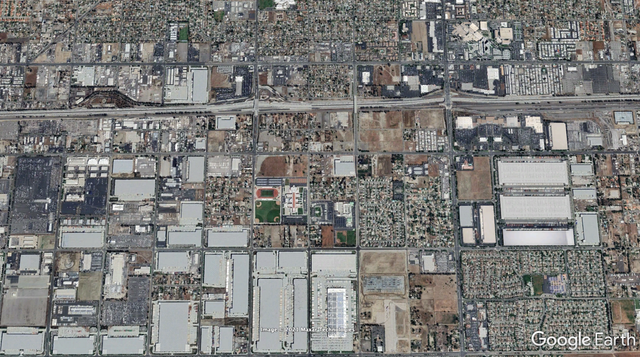 More than 20 warehouses for companies like Amazon and UPS now sit within a mile of the school. Fontana's mayor has taken pride in helping transform the community into California's warehouse epicenter, providing thousands of jobs. But community groups say neighborhoods are being choked with traffic and toxins. Here's a short video on how online shopping is polluting the Inland Empire. 👉 L.A. Times (8:30 mins)

ABC News aired the first public interviews with children from the Turpin family, who were held captive by their parents in a Riverside County home in a case that shocked the nation. Jordan Turpin, now 21, described how in 2018 she slipped out of a window and dialed 911, her hands shaking so violently she struggled to press the keys. "I literally never talked to someone on the phone," she said. Newly revealed body cam footage showed what officers found in the home hours later: flustered parents, trash everywhere, and children emaciated and shackled. ABC News | Desert Sun

"They're living in squalor." ABC News also found that despite $600,000 in private donations, the children have been at times without food and living on couches. ABC News | A.P. 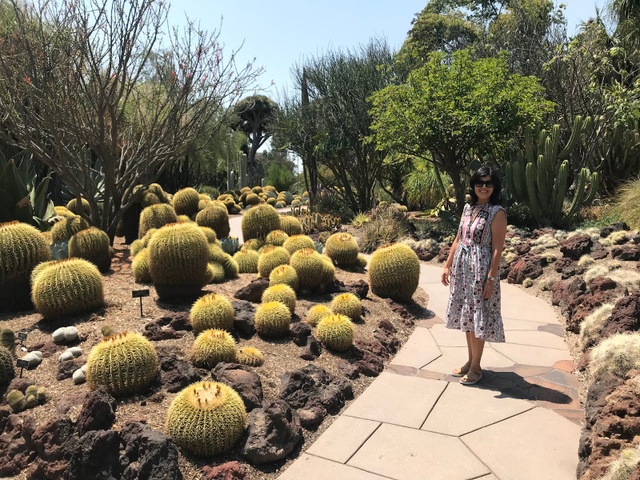 … Natalia Molina, a Distinguished Professor of American Studies and Ethnicity at the University of Southern California. Her upcoming book, “A Place at the Nayarit,” explores the immigrant community around the Nayarit, an Echo Park restaurant her grandmother opened in 1951.

Dodger Stadium. It is the third oldest major league ballpark in the country — it’s not new or shiny, but there is not a bad seat in the house. But the real gem of the stadium are its fans. You’ll find families that have been coming for generations, passing Dodger memories down through their DNA. As a Latina who grew up in Echo Park, I used to walk to home games with my family to see Los Dodgers. Latinx make up 48% of L.A. County, and there are few places where one feels more Latinx collectively than Dodger Stadium.

During the playoffs this year, a mariachi band played throughout the game in the bleachers surrounded by some of the most loyal fans. When they played "El Rey" (the King), an unofficial Mexican anthem, it felt like half the stadium erupted in song. Just another reminder of why Dodger Stadium has always been my True North.

I'm hooked on the current season of Smoke Screen, “The Sellout.” The podcast is a collaboration with LA TACO, my favorite grassroots media, where I get a lot of my local news. It examines the case of an L.A. hero, Councilperson Jose Huizar, who was accused of taking bribes from developers as his district's neighborhoods were gentrified and his constituents lost their homes. For me, as someone who studies Latinx history, it raises the question of whether representation is enough when someone can sell out their own people. The podcast also gives a more nuanced understanding of how gentrification works by showing us the political infrastructure around land development.

Can I have 5 answers on this alone? I turned 50 during the pandemic and since I couldn't travel, take-out became my way of experiencing the world: the warm goodness of the Cochinita Pibil Burrito (Yucatan-style pork) at Yuca's in Pasadena; a bite of warm arepa (a masa-stuffed pita-like pocket) from Sus Arepas food truck and the perfect crust of Side Pie Pizza, both in Altadena; the crunch of the empanadas de camarón at Mariscos El Faro and the juicy dumplings at Mason’s Dumpling Shop, both in Highland Park.

Judy Baca is a badass Chicana muralist and activist who dares to take up space by telling alternative histories through her murals, most famously The Great Wall of Los Angeles, a half-mile-long mural that occupies the Tujunga Wash in the San Fernando Valley.

Charlotta Bass was the editor and publisher of The California Eagle, the West Coast’s oldest Black newspaper. She was the first Black woman to run for vice president. She helped change the political conversation, which was encapsulated by her campaign slogan: “Win or lose, we win by raising the issues.”

Gustavo Arellano is a columnist for the Los Angeles Times. Gustavo claims to not be a booster for California. Indeed, he explores its dark past, raises tough questions about today and the future, and broaches difficult conversations.

I would ask: People often say that California leads the way in terms of being the world's fifth-largest economy. But because of its diverse population it also leads in terms of race, culture and politics. What can California's past tell us about its future, as well as the nation's?

Your forthcoming book, "A Place at the Nayarit," explores the community around a restaurant that your grandmother opened in Echo Park in 1951. How did you conduct the research and trace connections between the immigrant workers, their families back home, and the evolving city of L.A.?

When trying to paint a picture of a community, as I am doing in this book, historians rely on documents, using their training to scour official records and the personal papers of people deemed important enough to be in an archive. In general, though, daily life is poorly served by the archives. So to learn about the Nayarit and Echo Park, I turned to the community and its members, making an effort to eat at restaurants like my grandmother’s. (I know, tough job.) I also studied a 20-year run of El Eco, the hometown paper of Nayarit. Remarkably, it told me more about the lives of Mexicans in the U.S. than any U.S. papers, including La Opinión, Los Angeles’ Spanish-language newspaper. El Eco reported on peoples’ comings and goings, the postcards they sent home, and the nature of their work abroad. Oral histories helped fill in the details, the vibrancy, and the texture of my subjects’ lives.

An earlier version of this newsletter referred incorrectly to Dodger Stadium. It is the third oldest major league ballpark, not the second.