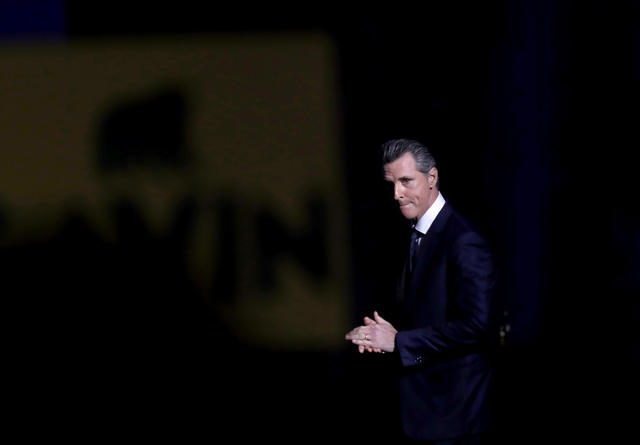 Gov. Gavin Newsom signed a law that would make President Trump ineligible for California's primary ballot if he doesn't make his tax returns public. "This law should be a national standard," he said. Republican critics called the law, which applies to all candidates, "gimmicky" and "just plain dumb." Trump's personal lawyer promised a fight: "The state of California's attempt to circumvent the Constitution will be answered in court." Politico | L.A. Times

Sacramento Bee editorial: "Trump can now say, truthfully, that California is attempting to rig the election against him."

L.A. Times editorial: "Newsom took a slap at Donald Trump that is hyperpartisan, probably counterproductive and perhaps even unconstitutional."

"To see those, those monkeys from those African countries — damn them, they're still uncomfortable wearing shoes!" 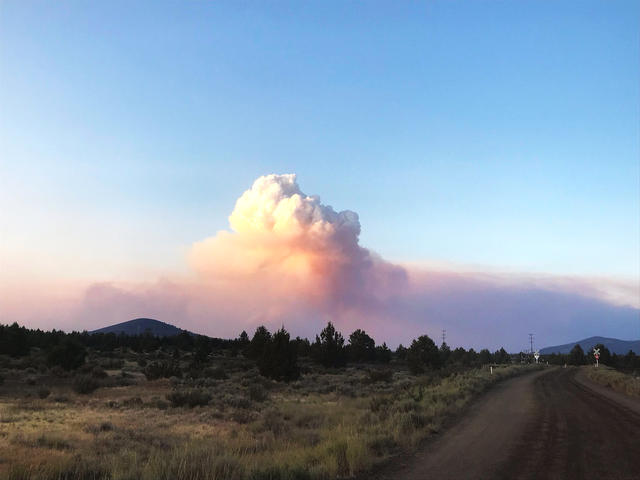 The so-called Tucker Fire raged in Modoc County on Monday.

A fire in Northern California's Modoc County grew rapidly to 23 square miles, making it the state's largest blaze this year. No homes were threatened, but it was uncomfortably close to a critical wildlife habitat in Clear Lake National Wildlife Refuge. The blaze was only 10 percent contained late Tuesday. KTVL

Here are small California towns that are both fire-prone and populated by large percentages of disabled or elderly residents. Sacramento Bee | Direct Relief

Fun fact: In California you can take the bar exam and practice law without ever going to law school. An obscure rule that few people know exists allows people to study at the elbow of a seasoned lawyer in lieu of a law degree. "Stop and think of some of the great lawyers in American history," a law professor said. "John Adams, Chief Justice Marshall, Abraham Lincoln, Thomas Jefferson. They didn't go to law school at all." N.Y. Times | ABA Journal 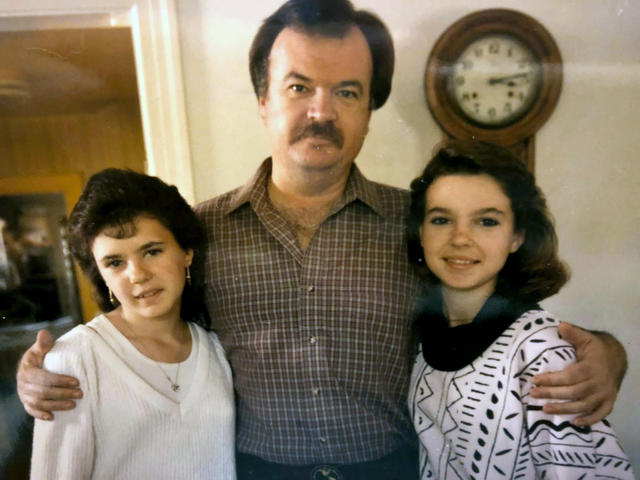 An undated photo of John Orr with his daughters, Lori, left, and Carrie.

It was on this day in 1992 that John Orr was convicted in one of the most spectacular betrayals ever perpetrated by a California public servant. Orr was a Glendale arson investigator who always seemed to be nearby when fires broke out in the 1980s. He would arrive at fire scenes, a biographer once wrote, "and like a water seeker with a divining rod, say, 'I believe the point of origin is ... there.'" Sure enough, he'd be right.

Over time, authorities noticed a pattern of fires set in the vicinity of arson investigator conferences in Central California. When Orr's fingerprint was found on a half-burnt incendiary device, the jig was up. An F.B.I. analyst later called Orr "probably the most prolific American arsonist of the 20th century." California Sun 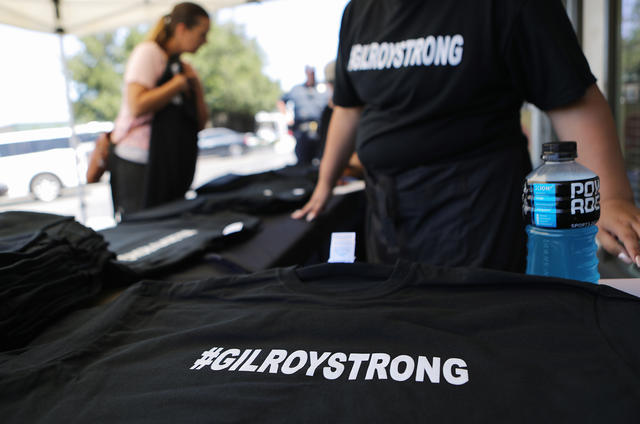 A T-shirt maker in Gilroy sold #GILROYSTRONG shirts to raise money for the families of the victims.

Investigators searching for a motive in the deadly Gilroy shooting found reading materials on white supremacy and radical Islam at the Nevada home of the gunman, Santino William Legan. It was clear that the attack was pre-planned, officials said, but the motive remained murky. "We understand him to be kind of a loner," an FBI agent said. A.P. | S.F. Chronicle

Dilbert creator and Bay Area native Scott Adams was criticized for appearing to try to capitalize on the Gilroy shooting. N.Y. Times

A San Francisco program gives homeless people one-way bus tickets out of town. For some people, it's a life saver. Wade Southwell reconnected with family and graduated from Yale. Others seem to resent the program. "People want housing," said a man who went back home to Iowa. "They don't always want to go back to their cities." S.F. Chronicle

Uber laid off a third of its marketing team in an effort to cut costs. The San Francisco ride-hailing company's IPO in May was one of the worst in stock market history. Yet even after the layoffs, Uber will still have 800 or so people working on marketing. 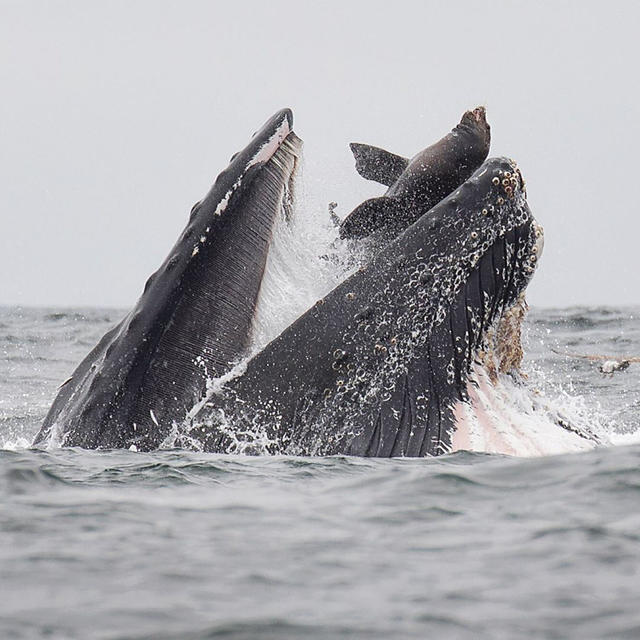 A wildlife photographer in Monterey Bay captured a humpback accidentally trapping a sea lion in its mouth when both species were snacking on the same swirling mass of fish. "As soon as I saw this photograph, I knew it may be one of the rarest shots I've ever taken," the photographer, Chase Dekker, said. "Not the most beautiful, not the most artistic, but probably something I would never see again." National Geographic 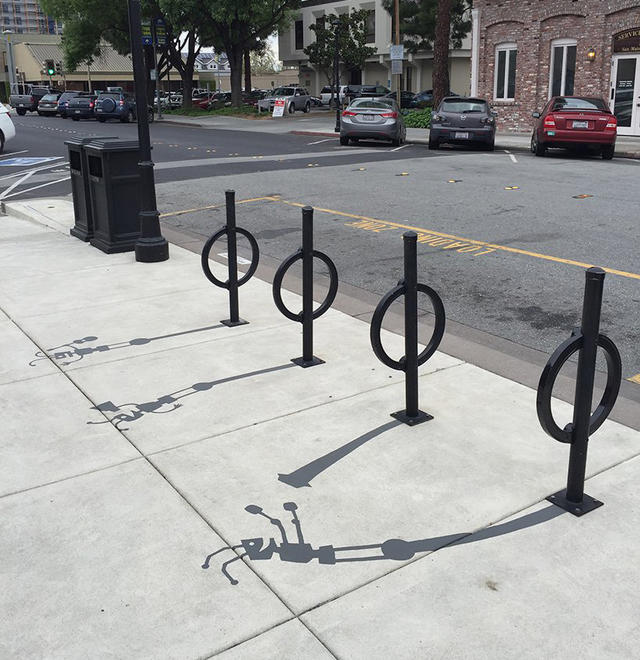 If you ever find yourself in Redwood City, be sure to look down. A few years ago the city commissioned an artist to paint fake shadows across the city's downtown. The result is delightful. Boing Boing | DamonBelanger.com 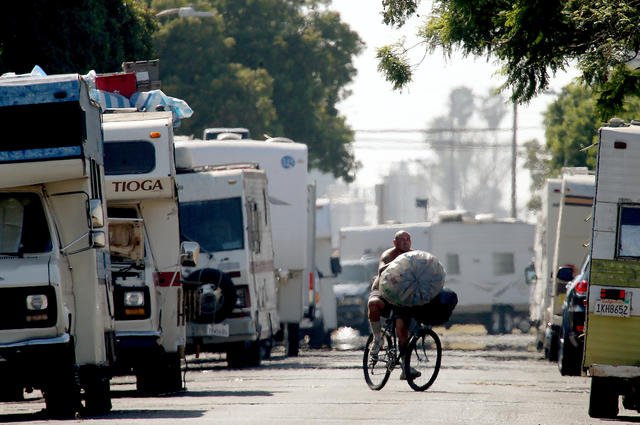 An area in Los Angeles where numerous people live in their vehicles.

The Los Angeles City Council has reinstated a ban on sleeping overnight in vehicles. At a hearing, local activists called the ban cruel and counterproductive, noting that the city lacks adequate shelter space for homeless people. Still, the vote was unanimous: 13-0. Many in the crowd responded with chants of "shame on you." Curbed Los Angeles | L.A. Times

Rite Aid and other stores in Bakersfield have started piping classical music to outdoor areas around the stores to combat panhandling. The idea is that even pretty music grates after a while. Results have been mixed. At Mad Dog Tattoo, the owner opted to go nuclear: ABBA's "Dancing Queen" over and over. It worked. Bakersfield Californian 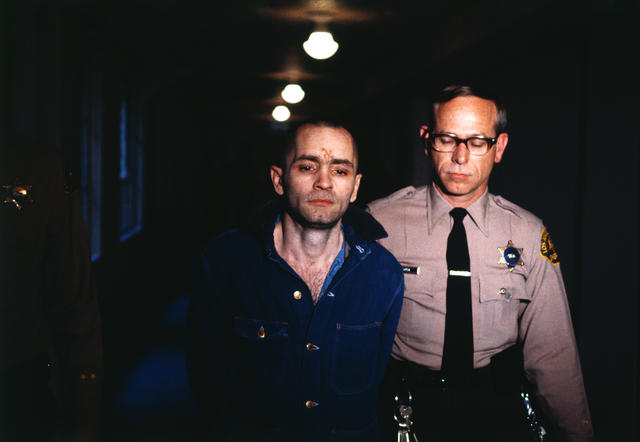 Charles Manson was led to court in 1971.

In 1999, author Tom O'Neill accepted a three-month assignment from Premiere magazine to write about how the Manson murders changed Hollywood. He didn't stop researching for another 20 years. His new book explodes a bomb under the official narrative that Manson was driven by messianic visions to incite an apocalyptic race war. Bogus, O’Neill has been telling interviewers. "[Lead prosecutor Vincent Bugliosi] knew winning a conviction on that would be his ticket to fame and fortune." N.Y. Times | L.A. Times 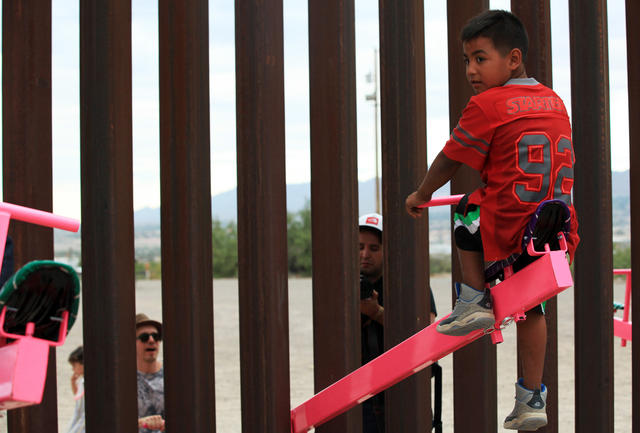 Children played on the seesaws in Ciudad Juarez on Sunday.

A pair of California professors created a playground unlike any other, installing three bright pink seesaws on a section of border fence between the U.S. and Mexico. The project was conceived as a way to tweak the meaning of a border fence. The event was "filled with joy, excitement, and togetherness," one of the creators said. (Here's video). NBC News | NPR 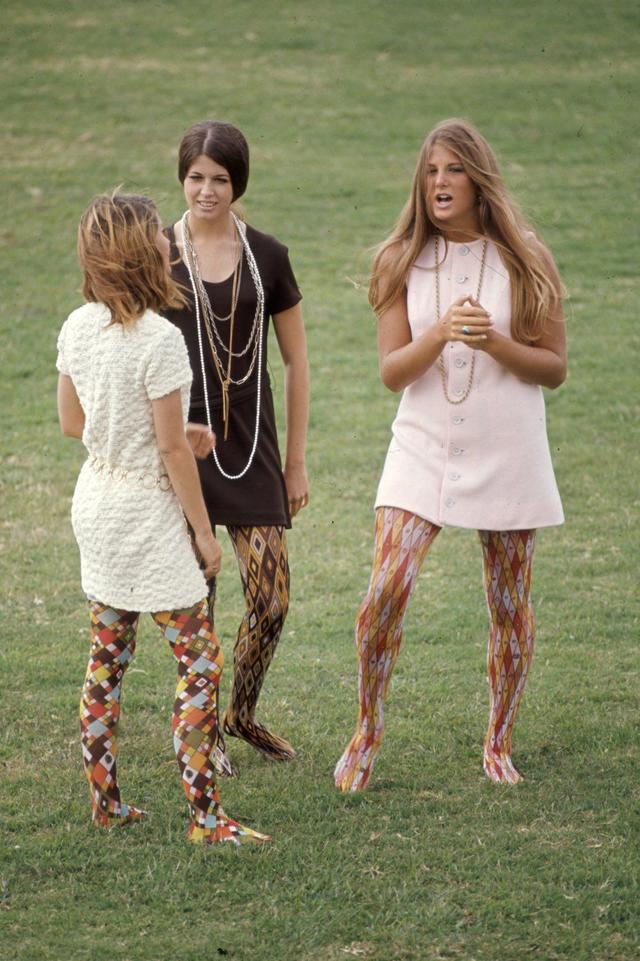 "The latest rule in girls' high school fashion is that there isn't any."

That was LIFE magazine's takeaway after dispatching a photographer to chronicle the hippie-infused high school campuses of Southern California in the fall of 1969. It was flowing hair, beads, fringes, and bell-bottoms as far as the eye could see. Here are the groovy pictures. Mashable | TIME