Hospitals in six rural Northern California counties are now treating more Covid-19 patients than ever, surpassing even the winter surge. In five weeks, the number of coronavirus hospitalizations has more than tripled in Del Norte, Tuolumne, Lake, Humboldt, Nevada, and Mendocino counties, a surge blamed in part on low vaccination rates. “We are full," said a doctor in Tuolumne County. "Our ICU is full. Our step-down unit is full.” CalMatters

Central Valley hospitals are also strained. “It is a mess,” a Fresno County official said. “I can tell you right now, we have very little ICU capacity for our seven counties.” KSEE | Fresno Bee 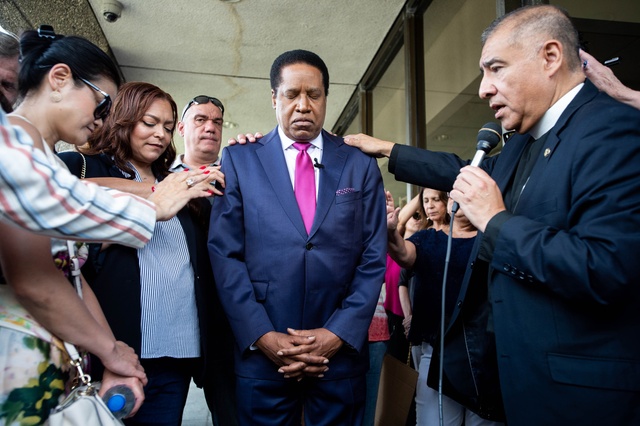 CalMatters reporters and editors grilled Larry Elder for an hour about what he would do as governor. A few quotes: 👇

State regulators are investigating whether Elder failed to disclose all of his income sources as transparency rules require. An Elder spokeswoman called it “a simple mistake." L.A. Times | S.F. Chronicle 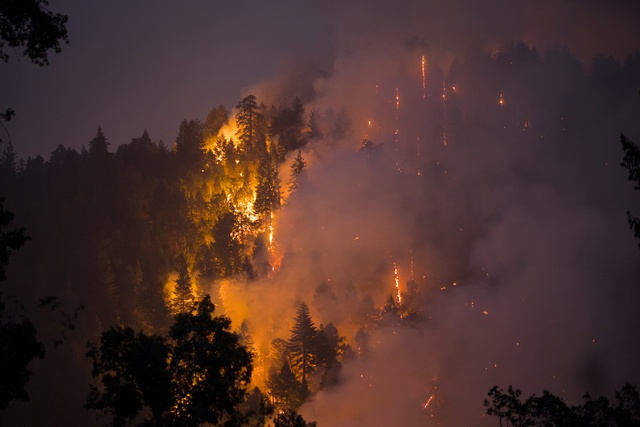 A raging wildfire burning east of Sacramento jumped across Highway 50 over the weekend, threatening new communities along a gateway route to South Lake Tahoe. One of about a dozen big blazes in the state, the Caldor fire has now grown to roughly 160 square miles, with 475 structures destroyed. Containment remained at zero. A.P. | Mercury News

At 8:45 a.m. on Nov. 8, 2018, as the deadliest wildfire in California history roared toward Paradise, 22 kids were stuck at Ponderosa Elementary School. It fell to Kevin McKay, a part-time bus driver who made $11 an hour, to ferry the children and two of their teachers to safety. As he drove, flames lunged from the edges of the road. The sky turned black. McKay told the teachers to take roll and hand-write three copies. "If something happens," he explained, “authorities need to know who was on this bus.” Lizzie Johnson, author of the new book “Paradise: One Town’s Struggle to Survive an American Wildfire," told the heart-pounding story of Bus 963. Washington Post

She said she was blindsided by a text from him ending their marriage.

He said she falsely accused him of cheating in front of their children.

She accused him of engaging in “divorce terrorism."

He acknowledged, in such matters, "no one is at their best.”

After seven years of litigation, Scott Hassan, known by some as the third Google founder, and Allison Huynh remain locked in battle over how to divide an estate estimated to be worth billions of dollars. Their divorce is playing out in public court, opening a rare window into the details of a big-money Silicon Valley divorce. It's not pretty. N.Y. Times 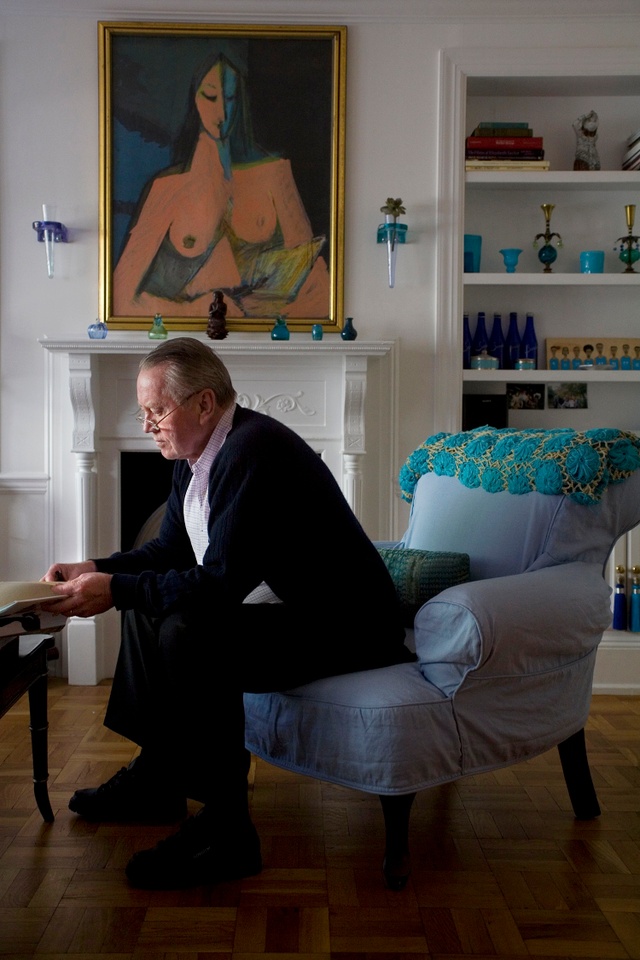 As Hassan and Huynh squabble over the sort of wealth that could lift thousands of children out of poverty, Chuck Feeney and his wife are enjoying their retirement in a small rented apartment in San Francisco. Feeney, 90, the reclusive cofounder of the airport retail chain Duty Free Shoppers, was once worth $8 billion. But he vowed to give it all away. It took about four decades — with gifts to universities, hospitals, and human rights groups — but last fall, he officially completed his quest. He lives now on a nest egg of about $2 million — and he couldn't be happier, he said. Forbes 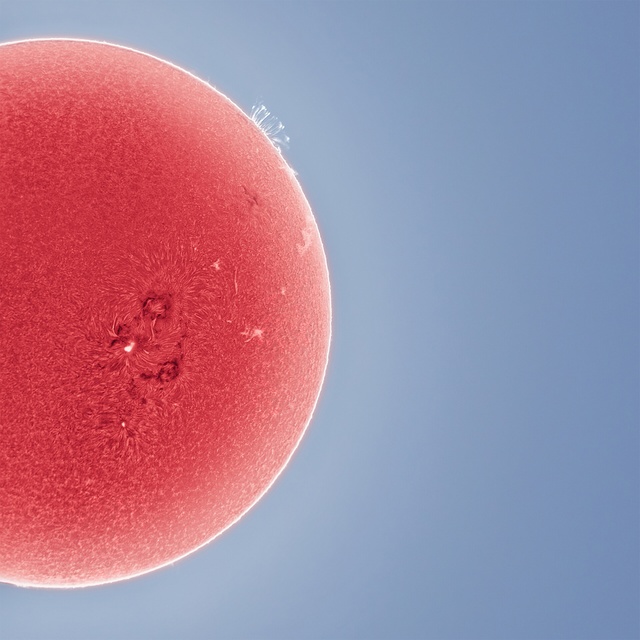 For Andrew McCarthy, photographing the cosmos from his backyard in Elk Grove began as a hobby a few years ago. But the hobby soon took over his life, as his exquisitely detailed images of the sun and moon regularly went viral. With more than 430,000 Instagram followers, McCarthy recently quit his job in software to pursue his photography full time. This month, his career switch got a big endorsement: McCarthy was shortlisted for the prestigious 2021 Astronomy Photographer of the Year competition for a gorgeous shot of sun, pictured above. See more of his work on Instagram. 👉 @cosmic_background

On Friday, San Diego officially launched what some call a "toilet to tap" project that will purify enough wastewater to provide 40% of the city’s drinking water by 2035. Before you cringe: other countries have been happily recycling wastewater for decades, and Orange County has been doing so since 2008. Anticipating resistance, San Diego came up with some pleasing branding for its project, which at a cost of $5 billion will be the largest infrastructure project in city history. They're calling it "Pure Water." S.D. Union-Tribune | City News Service

Waves pounded the Southern California coast with such force late last week that the ground shook. A section of roadway washed away in Malibu, the parking lot flooded at Capistrano Beach, and a couple in their 30s were swept off the rocks in San Pedro. The Orange County Register photographer Jeff Gritchen used a drone to capture dramatic images of waves leaping into homes along the shore, ominous scenes as rising seas threaten coastal communities. YouTube (~1:45 mins)

Patagonia said it was pulling its merchandise from a popular Wyoming ski resort after one of the owners hosted a fundraiser featuring Rep. Marjorie Taylor Greene. The Ventura retailer suggested that the event did not align with its values. Patagonia has commonly taken stands on hot-button issues, an approach that, surprisingly, appears to help sales. Washington Post 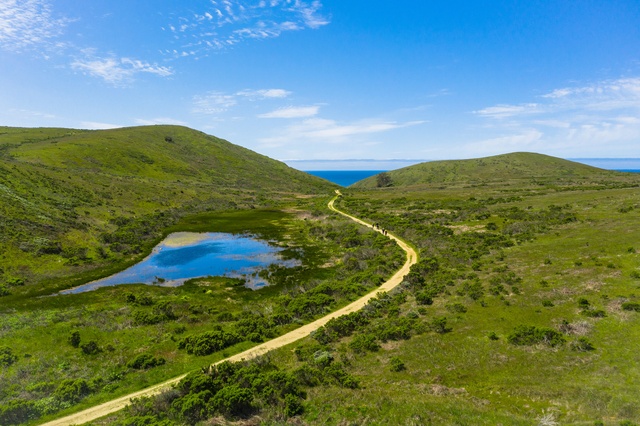 The walk to the beach down the way from Harmony.

Harmony has been described as a place oblivious to the passage of time. Founded in 1869, the pint-sized town nestled just off Highway 1 between Big Sur and San Luis Obispo has an official population of 18. There's no City Hall, no post office, and no traffic. Even so, it has the essentials covered: Pizza, wine, ice cream, and a glass factory where you can blow your own glass bowl for $190. When you've experienced all Harmony has to offer, there's a nearby trail to bluffs along the Pacific with benches perfect for cracking a bottle of wine. hikespeak | S.F. Chronicle 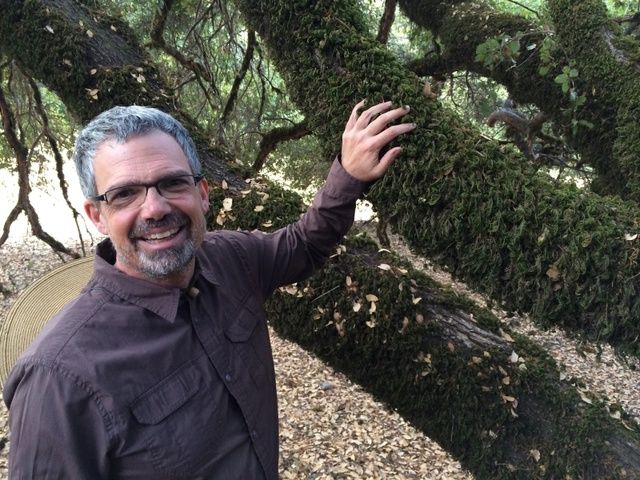 … Dave Muffly, an arborist who was hired by Steve Jobs to design the tree landscape at Apple’s headquarters in Cupertino. His Oaktopia project advocates planting more resilient trees in California.

A: My favorite places are in the coastal mountains where the huge trees still grow. The open spaces of the Santa Cruz Mountains, such as Russian Ridge and Skyline Ridge, are filled with trees — especially giant oaks — that are in excess of 500 years old. Since we cut down the big old Redwoods in the area long ago, these are the old trees now, placed in some of the most beautiful sweeping views you will find anywhere. Great places to peer back in time while enjoying the spaciousness and perspective of nature.

“The Overstory” by Richard Powers. This is kind of obvious since I'm such a tree guy, but, wow, what a story. I'm also amazed by how many people recommend this book to me. It really hits home for a lot of folks.

Paul Ehrlich, a Stanford professor; Mike Davis, the author of “Ecology of Fear”; Gov. Gavin Newsom. This dinner party will take place 10 years in the past. The topic will be preventing the collapse and burning of the forests of California. Included are an up-and-coming politician, a journalist with a deep understanding of the ecological history of California, and a prominent, veteran scientist. The starter question is simple, and, oddly, one asked in many superhero comics and movies, only sorta for real: "How do we stop the apocalypse?"

How can Oaktopia's mission help the current crises that California's ecosystems face? What do you say to someone who says, "Why plant more trees if they're just going to keep burning?"

The megafires besetting California are actually part of a much larger global phenomena. For at least 30 years, forest ecologists have been warning us that forests and trees can't get up and walk as the climate shifts, and they might not survive the new climates. These ecologists knew that trees and forests have always moved around the planet with shifting climates. It's just that we are shifting the climate really quickly. Current projections suggest the burning will continue until much of the planet's forests have burned. If we want trees in the future, we will be planting them. And they won't be the same trees. Oaktopia is based in the notion that "you break it, you bought it," and now we own a deeply damaged planet. The time is here to start putting the remaining pieces back together again, using all the courage and intelligence we can muster.