“As far as I’m concerned, Trump is the president.”

The L.A. Times took the pulse of Amador County in the Sierra foothills, where about one in five voters signed petitions to oust Gov. Gavin Newsom. For many residents, the recall effort is still about Donald Trump. They refuse to vote by mail, citing fears of vote rigging. And if Newsom wins, many won't trust the results.

Dan Schnur, former Republican political consultant: “People may not blame Newsom for the coronavirus, but it is an extremely grouchy electorate.” Washington Post 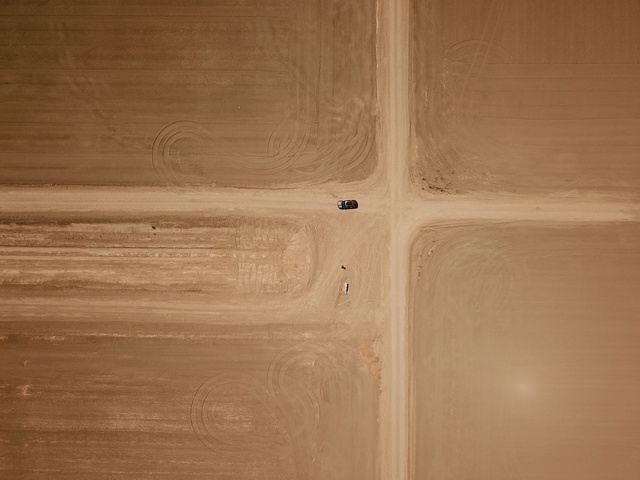 Last year in California, urban schools closed while many rural ones stayed open. Now it's the reverse. With the Delta variant sweeping through areas with low vaccination rates, schools last week closed in Shasta, Tuolumne, and Tehama counties. Lassen Union High School District in Susanville closed all of its schools this week. A nearby middle school has yet to open. EdSource

Among the eligible population under the age of 50 in Lassen County, roughly five out of six people remain unvaccinated. L.A. Times

Residents of Greenville in Plumas County returned home Saturday after their historic mountain town was overrun by the Dixie fire. The Getty photographer Josh Edelson captured a gut-wrenching series of photos showing the moments people arrived at their destroyed homes. One woman found a small mound with a little cross where firefighters had buried her dead dog. A selection of Edelson's photos. 👇 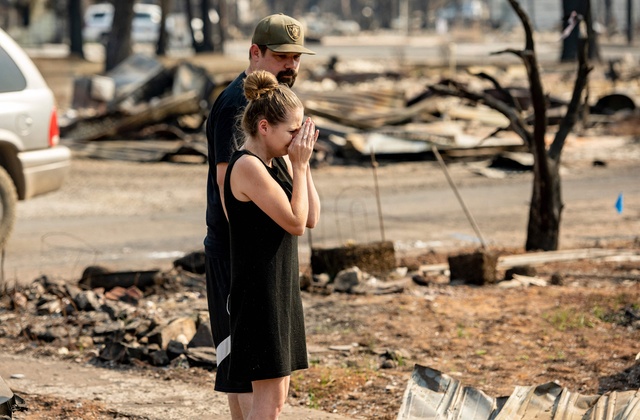 Riley Cantrell reacted to her mother's home. Their family dog died and was buried by firefighters. 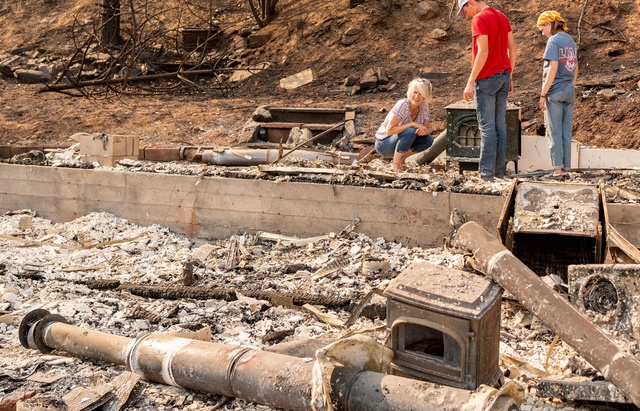 Wendy Weight, left, viewed the rubble of her home. 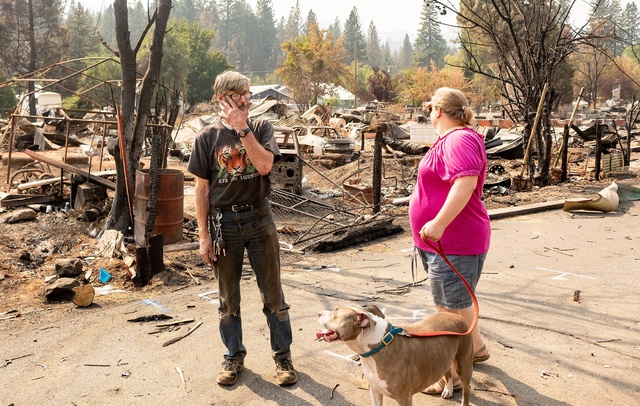 Jack and Heidi Green walked through a burned neighborhood. 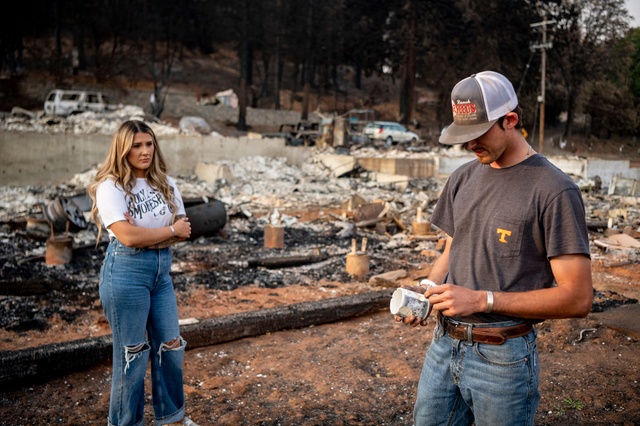 Arizona Erb, left, and Cody Najera sifted through the remains of their burned home.

A new startup in Silicon Valley, believed to be funded by Jeff Bezos, has been recruiting a large cadre of scientists with lavish salaries. Altos Labs' goal: figure out how to make people younger. Among those who have joined the project is a Nobel laureate who discovered how to revert a cell to a primitive state and a Spanish biologist who won notoriety after he mixed human and monkey embryos. MIT Technology Review 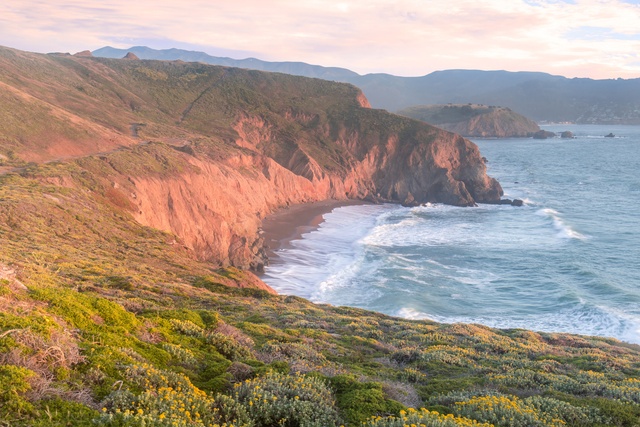 “This is just a hard loss."

A Bay Area woman fell 50 feet to her death from a popular bluff on the San Francisco Peninsula Sunday morning, police said. Witnesses told police that the woman, identified as Yvonne Rogan, 45, tripped and fell while walking along the Mori Point trail in Pacifica. Her friends and family were in disbelief. Rogan left behind a husband and son. KRON | Bay City News Service 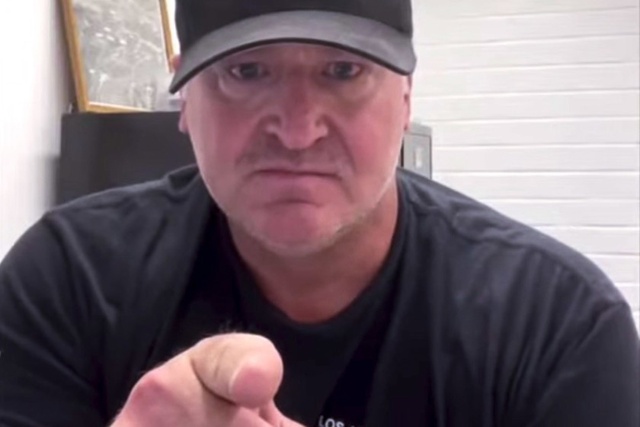 The columnist Steve Lopez discovered that the Los Angeles firefighter who equated his department's vaccine mandate with tyranny appears to live in Texas. Capt. Cristian Granucci told a newspaper in 2018 that he moved to Texas "for the freedoms" and commutes to Los Angeles. Lopez asked, "Shouldn’t those jobs be reserved for Californians?" L.A. Times

Street racing is a longstanding problem in Bakersfield, fraying residents' nerves and causing occasional deaths. In the artfully done short documentary "How to breathe in Kern County," the filmmaker Chris Filippone portrayed another side of the pasttime: a form of catharsis for Latino laborers who toil in the oil and agriculture fields. aeon (~9 mins) 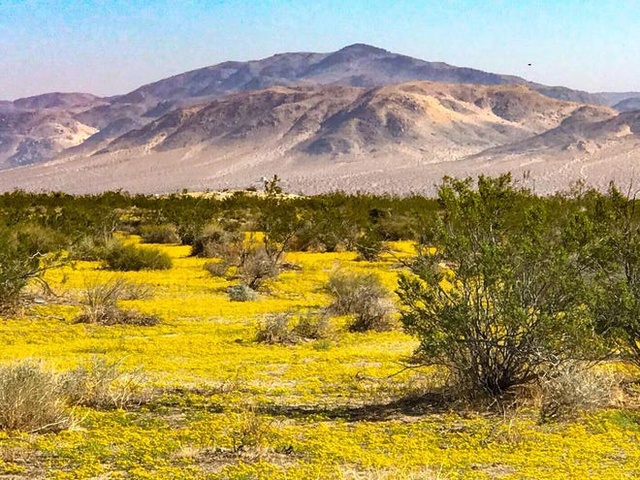 A riot of chinch weed turned the desert gold near Landers.

Driving through the Mojave high desert a couple weeks ago, Kenny Irwin Jr. happened upon a carpet of gold stretching for miles across the typically bone-dry valley. “I would say my jaw dropped," he said. A desert biologist explained that it's chinch weed, a wildflower coaxed from the desert floor every so often during summer monsoonal rains. “There are places in the California desert that are in full bloom now,” he said. Word is parts of Joshua Tree are beautiful right now. Desert Sun 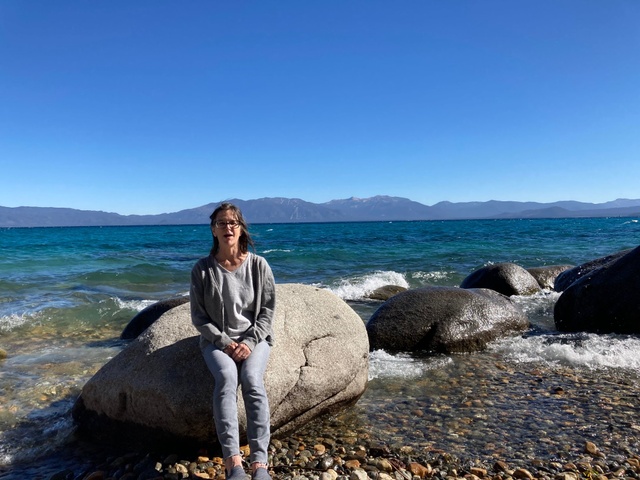 … Frances Dinkelspiel, a journalist, author and co-founder of Cityside, a nonprofit news organization.

A: Considering the Caldor fire almost destroyed it, I would say everyone should visit Echo Lake, a gorgeous area on the edge of Desolation Wilderness not far from South Lake Tahoe. It is an area of both natural beauty — with its clear, cold waters surrounded by granite mountains — and interesting California history. UC Berkeley professors started to build rustic cabins on Forest Service lands there in the 1920s. Their Stanford rivals were not to be outdone and constructed cabins at the nearby Fallen Leaf Lake, thereby continuing the schools’ rivalry — but in the mountains. You have to hike or boat into most of Echo so it feels like a place from the past.

I highly recommend “After the Last Border: Two Families and the Story of Refuge in America,” by Jessica Goudeau. Her reporting and storytelling on two womenm — one from Myanmar and one from Syria — who emigrate to Austin, Texas, 10 years apart is superb. The book is filled with details about the women’s lives in their home countries, their struggles to remake themselves, and the erratic history of U.S. immigration policy. It’s a gripping and heart-rending tale, narrative nonfiction at its best.

Rockridge Market Hall on College Avenue in Oakland is a European-style market with different stores for fish, meat, produce, baked goods, wine, coffee, flowers, and prepared foods. The stores open to the sidewalk and to one another so you can stroll through and get inspired about what to cook for dinner, or what to grab if you can’t wait that long.

I would have to invite Isaias Hellman, my great-great-grandfather, a Jewish immigrant who came to Los Angeles from Germany in 1859 and became one of the state’s leading financiers. He eventually owned Wells Fargo Bank. I wrote a book about him, "Towers of Gold," but I have so many unanswered questions to ask him! What were his business partners, Levi Strauss, Gov. John Downey, and Henry Huntington, really like?

I could ask the same of the architect Julia Morgan, who redid the charred hulk of the Fairmont Hotel after the 1906 San Francisco earthquake and designed Hearst Castle overlooking San Simeon for William Randolph Hearst.

Dorothea Lange, the photographer, led such an interesting life, and I would ask her about the time during the Great Depression she had a studio in the “Monkey Black” building on Montgomery Street in San Francisco. Some of the other artists in her crowd who also had studios there were Maynard Dixon (her then-husband), Benny Bufano, Ralph Stackpole, Diego Rivera, and Frida Kahlo.

Wildfires, rising Covid cases, drought, a recall election — there's no shortage of long-term news stories in California at the moment. But what's an issue you think is just as important that isn't getting as much attention?

I believe the decline of local news is an urgent issue that affects our democracy and is not talked about nearly enough. There are too many locales in California that don’t get written about at all. How do those residents know what their city councils, school boards, or police departments are doing? How do they know for whom to vote? I bet most people aren’t aware that one hedge firm, Alden Capital, known for buying up papers, cutting staff, and stripping resources from media properties, owns about 24 of the state’s newspapers. Margaret Sullivan, who writes about media for the Washington Post, said Alden is "one of the most ruthless of the corporate strip-miners seemingly intent on destroying local journalism." That’s why my partners and I co-founded Cityside, a nonprofit news organization that runs Berkeleyside and The Oaklandside. We want to help stop the hollowing out of local news.