Nearly three-quarters of California is now in a state of extreme to exceptional drought. Scientists are calling it a drought within a "megadrought," the second-worst such era in the past 1,200 years. While California has always had highly variable precipitation from year-to-year, in the past two decades dry years have become more frequent. This overview of the state's water woes includes some jarring graphics. 👉 Washington Post

“We’re looking at an absolutely catastrophic year.” Farmers are sacrificing one crop to save another. Mercury News 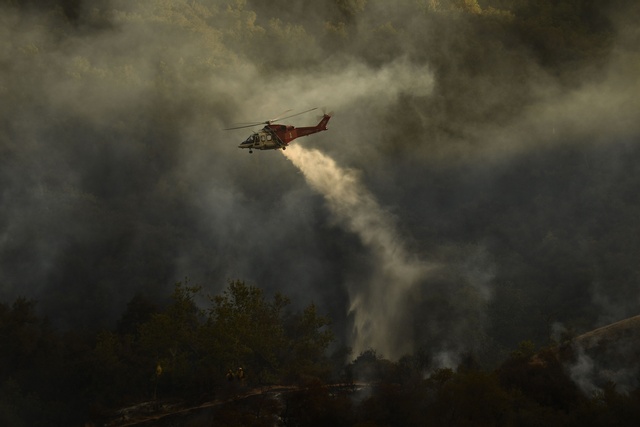 A helicopter made a water drop on a blaze in Topanga State Park on May 15.

Comparisons of California's wildfire activity through mid-May this year and the same period in 2020:

On Monday, California leaders outlined a $2 billion wildfire preparedness package as the peak fire season picks up. It includes a dozen new helicopters, seven air tankers, and a new operations center in Southern California. One weak spot is a shortage of the elite forestry crews known as hotshots. One reason: Entry-level Forest Service firefighters start at $14 an hour, far less than what California pays. A.P. | Mercury News

Taxes are often cited as a factor driving Californians out of the state. According to data cited by Justin Fox at Bloomberg, California's tax rates for high earners are indeed the highest in the nation. But lower- and middle-income workers in California actually face lower effective tax rates than those in Texas, where many transplants end up. To understand the California exodus, says Fox, look to soaring housing costs and flagging wages. 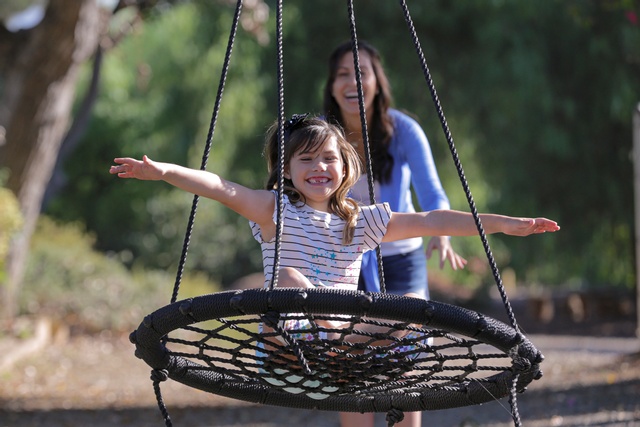 Evangelina Vaccaro, 9, was cured of adenosine deaminase deficiency as part of a stem cell therapy. Others families are being deprived of the cure.

California taxpayers funded research that led to a cure for a rare genetic immune system deficiency, familiarly known as bubble baby syndrome, that commonly kills victims by the age of 2. But other desperate families are being deprived of it. That's because the biotech firm awarded the exclusive right to market the cure has decided to shelve it, for “business reasons.” The columnist Michael Hiltzik told the story. 👉 L.A. Times

This month, San Francisco school leaders allowed some high school seniors to return to classrooms in what critics called a cynical maneuver to qualify for $12 million in state funding. Now, three San Francisco lawmakers have demanded that the city's payout be blocked. “This money was used to incentivize reopening," Assembly Member Phil Ting said, "and clearly, the district cared more about getting the money than actually bringing back children into the classroom.” S.F. Chronicle | Politico 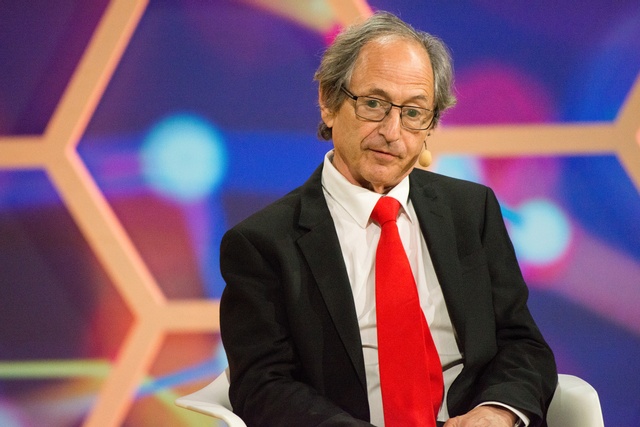 Critics have accused Michael Levitt of spreading misleading claims about the coronavirus.

Last August, Placer County supervisors weighing Covid-19 restrictions sought advice from Michael Levitt, whose credentials seemed stellar: the 2013 Nobel Prize in Chemistry and a Stanford professorship. But they are unrelated to infectious disease outbreaks. Even so, Levitt has been an outsize voice during the pandemic, sometimes making dubious claims. He predicted the American outbreak would be over by August 2020 and advised letting young people be exposed to the coronavirus. Epidemiologists, he said, were "politically correct." Here's a great read on what happens when a Nobel Prize winner is both loud and, according to critics, dangerously misleading. 👉 STAT

John Steinbeck wrote a mystery werewolf novel that has survived unseen in an archive ever since being rejected for publication in 1930. "Murder at Full Moon," written by the Salinas author almost a decade before "The Grapes of Wrath," tells the story of a fictional California community gripped by fear after a series of gruesome murders. Scholars are calling for it to be published, but Steinbeck's estate has declined. The Guardian 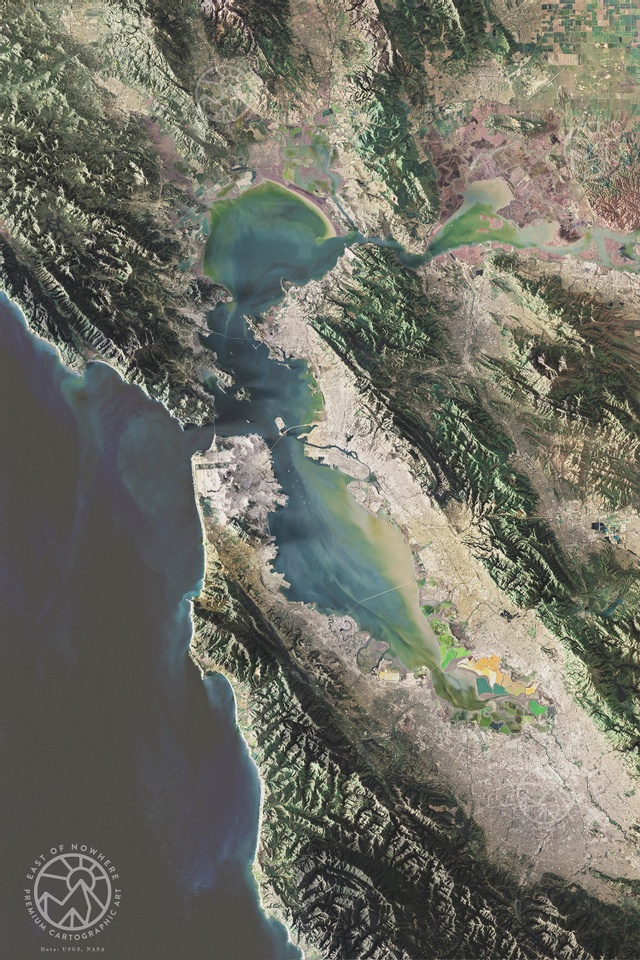 ☝️ The mapmaking company East of Nowhere created this fantastic view of the Bay Area.

The high level of detail was accomplished with data from multispectral satellite instruments, which record information undetectable to the human eye. The topography is also exaggerated for effect. One result is a great visualization of the Bay Area's fault lines, including the San Andreas. (See the location). It's marked by the dramatic plunge between the Santa Cruz Mountains and Santa Clara Valley, parallel to Interstate 280. With each earthquake, the portion to the west of the fault continues its slow journey north — eventually, it's presumed, to be plastered onto Alaska. 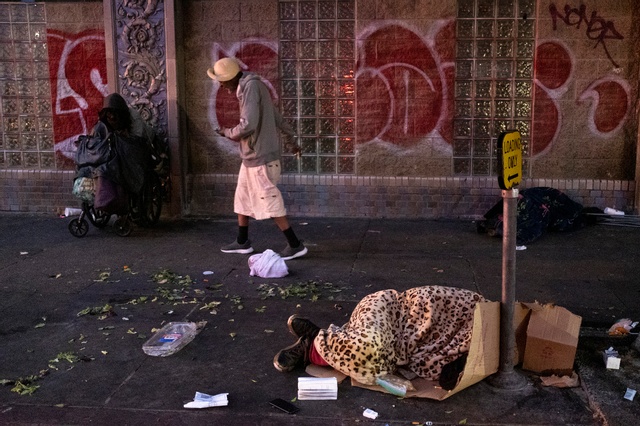 People rouse as the sun starts to rise in Los Angeles' skid row on April 23.

The columnist Steve Lopez joined an early morning broom brigade on Los Angeles' skid row. Many of the workers are ex-convicts or are themselves homeless, but they are happy to have work. Each day, they collect at least a ton of trash and between 100 and 300 needles. “I think there’s beautiful poetry in this work," said Ricardo Barron, the team's director, as people who were written off by society embrace service "for people who, again, society has thrown away.” L.A. Times

Amazon is poised to announce a deal to buy the fabled movie studio MGM for nearly $9 billion, several newspapers reported. The acquisition would represent the most aggressive foray yet by a tech giant into Hollywood, delivering to Amazon a vast library of movies and shows, including the James Bond, Pink Panther, and Rocky franchises. Bloomberg | Hollywood Reporter 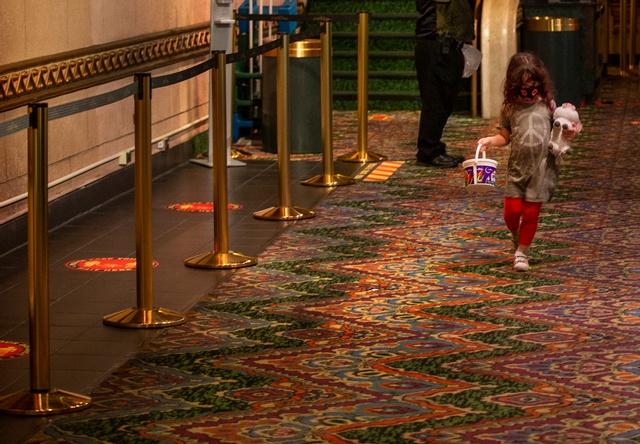 Lulu Gooberman, 4, went to the El Capitan Theatre to watch "Raya and the Last Dragon" on March 19.

Hollywood is counting on the summer movie season to kick-start a return to theaters after the pandemic ravaged the industry. Last Wednesday, all five of Hollywood’s major studios gathered in person at an AMC theater as part of the “Big Screen is Back” initiative. Arnold Schwarzenegger was there too: “If you have the movie and you don’t have the theaters," he said, "then you have nothing.” It's uncertain whether audiences will agree. N.Y. Times | A.P.

The N.Y. Times reconstructed how a 17-year-old's birthday invitation on TikTok snowballed into what teenagers believed would be the party of the century. Before mayhem broke out in Huntington Beach late Saturday, Adrian Lopez, a high schooler from Riverside County, was panicked. "My parents don’t know and they’re going to find out,” he said, “so, Mom and Dad, I’m sorry but I don’t know what to do.”