"Shut the whole system down."

Nearly 600 San Francisco teachers signed a petition saying they would skip school Thursday to protest what they said were inadequate coronavirus safety measures. The move would add to the strain caused by widespread absences of teachers who have reported sick. Dr. Jeanne Noble, UCSF’s head of Covid response, said any attempt to shut schools would be “wrong beyond words.” She added: “We just cannot do this to our children again.” S.F. Chronicle | SFist 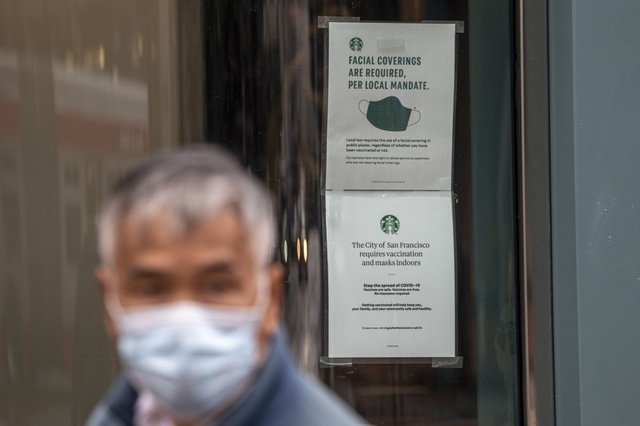 The masks need to stay on.

A woman accused of killing a baby girl at her Visalia day care in November was the subject of an earlier complaint over a child's unexplained fracture. However, no child services agent was sent to follow up "due to Covid-19 pandemic," an investigative document showed. Officials concluded that the allegation from March 2020 against 41-year-old Amanda Taylor "may have happened." They closed the case anyway, citing a lack of evidence. Visalia Times-Delta

Ross Douthat offered an interesting meditation on the small-c conservatism of Joan Didion: "If all fans of Didion have something they particularly owe her, then what she offered to admirers on the right was an example of how to write conservative essays that were first and foremost simply essays, their conservatism a matter of atmosphere and attitude rather than tedious polemic." N.Y. Times

Surf Ranch, a wave pool carved out of Central Valley farmland 100 miles from the Pacific, is a marvel of engineering, creating glass-like barrels that last for 45 seconds. Here's what happened the first time professional skim boarder Austin Keen was invited to give it a try. 👇

A 65-year-old Yuba City man was left paralyzed after police officers slammed him to the ground and used “pain compliance” techniques, according to a lawsuit announced Wednesday. Officers arrested Gregory Gross on April 12, 2020, while investigating a 1-mph vehicle collision that caused no injuries or damage. In body cam video, Gross, in handcuffs, tells an officer that he can't feel his arms or legs. The response: “Mr. Gross, we are done with your silly little games.” Sacramento Bee | A.P. 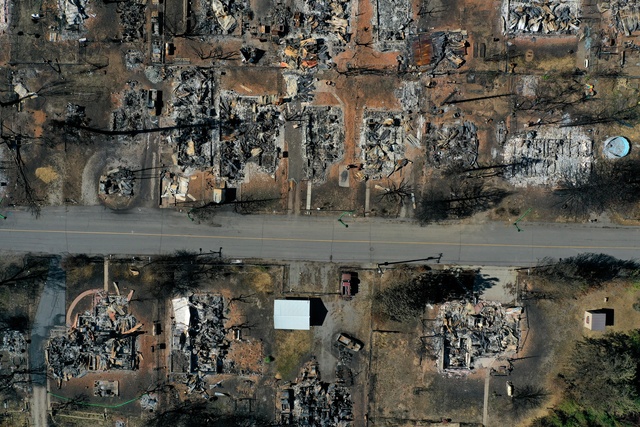 A Guardian reporter and photographer paid a visit to Greenville, the Gold Rush community devastated in August by the Dixie fire. While the town's future remains uncertain, those involved in the recovery effort say Greenville is worth fighting for. “There’s this quality there and you can’t explain it,” said Sue Weber. “No matter who you are or what you hold, when the rubber meets the road, the community will gather around. I think that’s rare today.”

Last fall, Bolt, an e-commerce developer in San Francisco, tested a four-day workweek. The results were so positive — making employees both happier and more productive — that the company has now decided to make the change permanent. “A lot of companies operate with a lot of work theater, which is people caring more about the appearance of working than the actual work,” said Ryan Breslow, the chief executive. CNBC | Fast Company 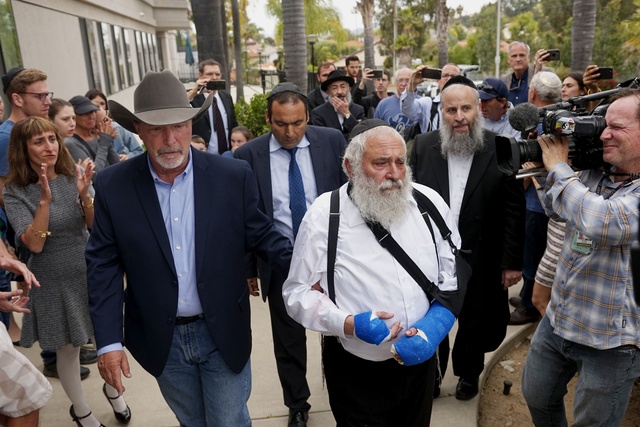 Rabbi Yisroel Goldstein, who was shot in the hands, walked toward a press conference in Poway in 2019. 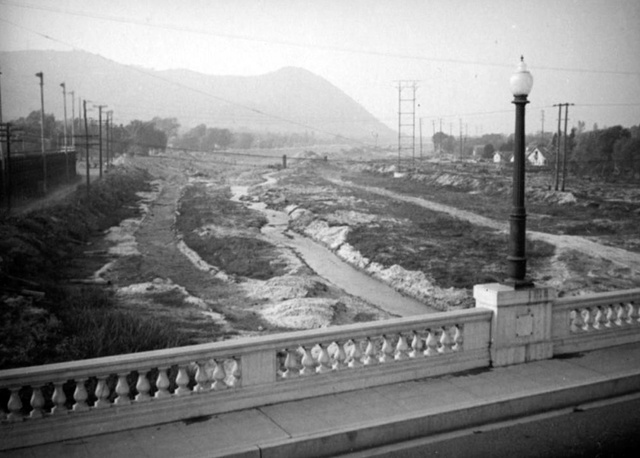 Glendale-Hyperion Bridge in the 1930s.

The Glendale-Hyperion Bridge, a cultural landmark, has been illuminated since its completion in 1929 by dozens of decorative bronze lampposts. But thieves have sawed down and hauled away so many of the old lights that the city made the drastic decision to remove those that remain, placing them in storage. All told, 22 are missing, officials said. “It’s just a tragic loss of some of the city’s history,” a local historian said. L.A. Times | Fox 11 Los Angeles 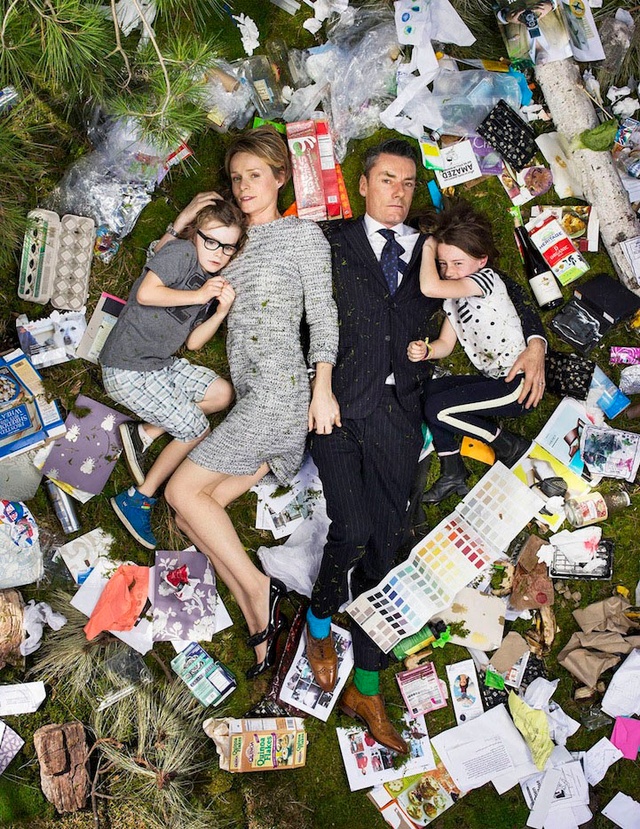 The photographer Gregg Segal asked his friends and neighbors to save their garbage for a week, then lie down in it in his Altadena yard and be photographed. Segal said he hope the series, "7 Days of Garbage," inspires people to reflect on what we're doing to our world. "A couple of weeks after a show, my son and I were driving around and he started to kind of reflect on plastic," he said. "It really struck him that there wasn’t anything plastic in the world 100 years ago. And now the world is covered in it." Lens Culture | GreggSegal.com 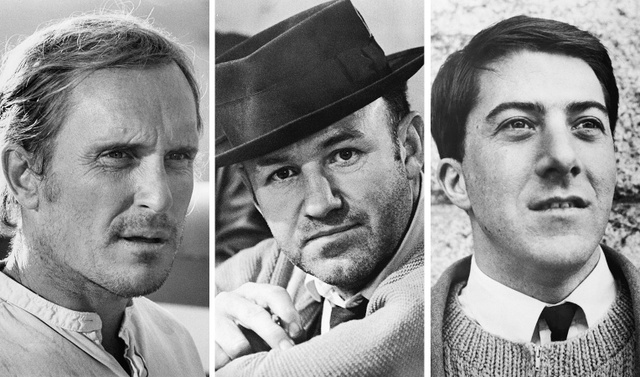 Fun fact: Before they were famous, Dustin Hoffman and Robert Duvall were roommates in New York City in the 1960s, and they palled around with an acting school reject named Gene Hackman.

Few would have guessed, least of all the men themselves, that they would each become giants of Hollywood.

Hackman and Hoffman, both born in Southern California, became friends as students at the Pasadena Playhouse in 1957. But Hackman didn't stay long. Deemed talentless, he earned a grade of 1.4 on a scale of 1 to 10 in his first semester and was kicked out.

Both men made their way to New York, where they hooked up with Duvall, another Southern California native. The trio was instantly inseparable.

Scrounging for acting roles and scraping by on menial jobs, their futures were uncertain. But in interviews with Vanity Fair decades later they recalled a time of creativity, adventure, and parties late into the night at the West 109th Street apartment shared by Hoffman and Duvall.

Hackman: “There was a kind of feeling of Jack Kerouac at that time — 'On the Road' — kids just wanting to have a good time and kind of experience things. It didn’t have anything to do with being successful — just wanting to try this thing and see if it worked.”

Duvall: “Those were good years, not knowing what the future was about. All these friends. Very important. Dreaming. That was fun.”

Before long, bit parts gave way to bigger ones and ultimately breakout roles on the big screen. For Hackman it was "Bonnie and Clyde," for Duvall "To Kill a Mockingbird," and for Hoffman "The Graduate."

Duvall and Hackman are now both 91, Duvall having celebrated a birthday this week. Hoffman is 84. Between them, they have 19 Oscar nominations and five wins.

In a 2003 N.Y. Times interview, Hoffman and Hackman confessed to feeling like imposters — "Like, 'When are they going to find out about us?'" Hackman said. Hoffman suggested their careers could have easily gone another way: "I know there are certain actors ... who have had really good lives. Regional actors. At the Seattle Rep, say. And you know, that would have been us — and it would have been great."