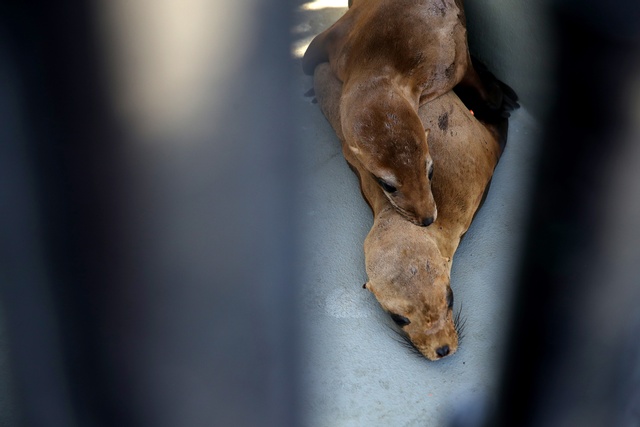 A study found that 25% of adult California sea lions end up with urogenital carcinoma, the highest prevalence of cancer in any mammal, including humans. Afflicted sea lions often end up on the beach, underweight and swaying their head back and forth. Researchers blame pesticides and a cancer-causing herpes virus. An L.A. Times investigation last year revealed that massive amounts of DDT waste was dumped in the ocean near Catalina, a toxic threat not just to marine life but to humans. Reuters

Political prognosticators of every stripe have dismissed the gubernatorial run of Caitlyn Jenner, who is polling in the single digits, as a publicity stunt. Asked by a reporter why they are wrong, Jenner talked about how she is embracing her truest self for the first time.

Jenner: “I don’t quite understand what the question is." Politico

At California's high school proms, young people wore custom-made masks to match their outfits and danced in silent discos with headphones to encourage social distancing. But they still had fun. Prom, a Goleta high schooler said, “was probably one of the best moments of my life.” The New York Times produced a fantastic collection of photos from four California high school proms.

Scrappy-Doo is the nephew of cartoon star Scooby-Doo.

The Wikipedia entry for the plucky cartoon puppy Scrappy-Doo is 25,623 words, nearly 2,000 words longer than the entry for the entire history of Poland. Mystified, a British journalist who stumbled upon the page tracked down the author: Shauna, a 20-year-old college student in California who has high-functioning autism and felt Scrappy was misunderstood. "He was sweet and happy, he was quirky, he was kind,” she said. The Waiting Room 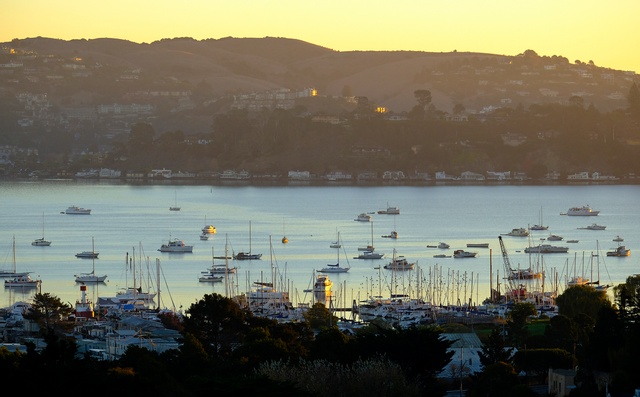 Small boats have been squatting off Sausalito for years.

Floating in Richardson Bay, by Sausalito, are more than 100 anchor-outs, people who live freely and illegally on unseaworthy vessels. But officials have begun taking a harder line, snatching vessels out of the bay to be crushed. Jeff Jacob Chase, an anchor-out since 2000, described the community as a place of freedom, and beauty, and art. “I would hate to see all of that die because somebody has an idea that everybody needs to live the same, in a homogeneous blob," he said. "That homogeneous blob will kill us.” S.F. Chronicle

An inspirational graduation speech by Oakland high schooler Ahmed Muhammad has been getting shared widely on social media. “As some of you may have heard," he said in part, "I recently became the first Black male valedictorian in our school’s history. And I want to say something about that. Oakland Technical High School has been around for 106 years and there's absolutely no way you can tell me I'm the first Black person capable of being valedictorian." Muhammad is headed to Stanford in the fall. SFGate.com | S.F. Chronicle 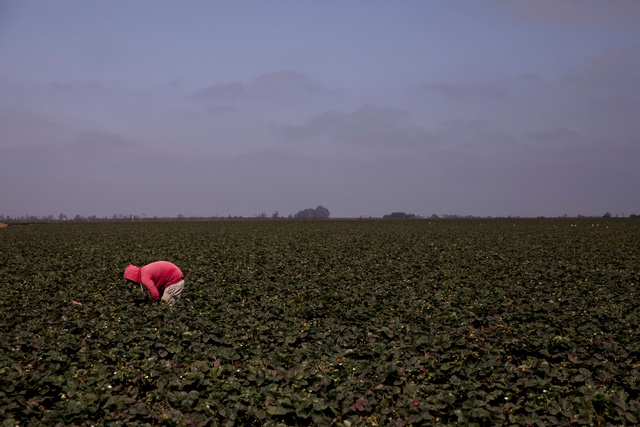 A farmworker picked strawberries in Salinas.

During the height of the pandemic, farmworkers in the Salinas Valley faced a rate of Covid-19 infection that far surpassed the general population. Then in February, D’Arrigo California, a major local grower, got approval to host mass vaccinations. The county did outreach, and growers offered time off and transportation to anyone who wanted to get inoculated. Four months later, more than two-thirds of the county's farmworkers have been vaccinated. Washington Post 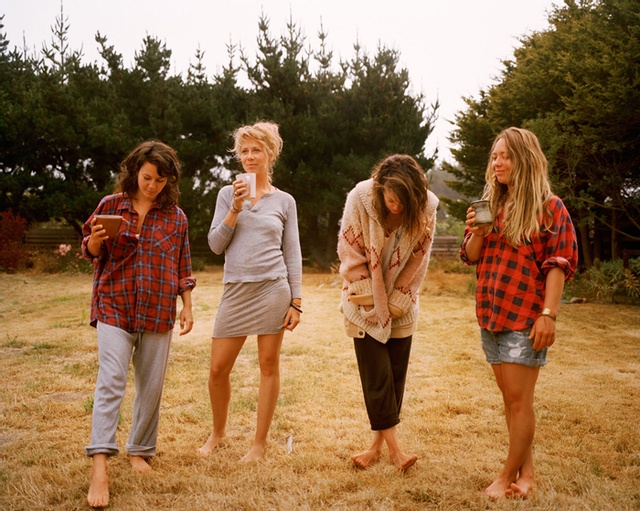 So many inmates are dying of opioid overdoses that the Los Angeles County Sheriff’s Department has adopted a novel approach: mounting canisters of naloxone, an overdose reversal nasal spray, on the jail walls. Days after the pilot program was launched last month, the drug saved two lives. The inmates are going to get their hands on fentanyl, one jail official acknowledged. "We’re just trying to get ahead of it.” L.A. Times 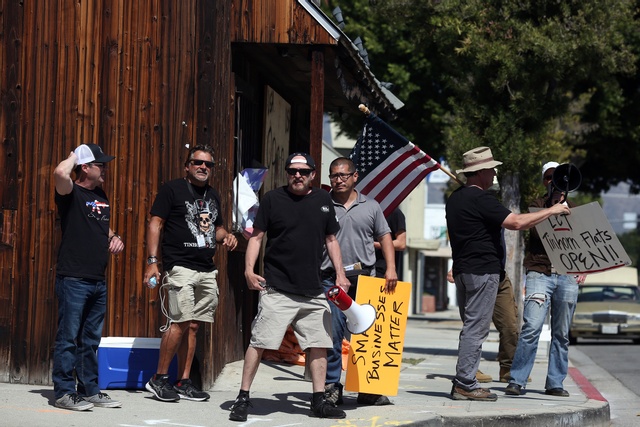 When Gov. Gavin Newsom ordered a halt to indoor dining last year, Tinhorn Flats, a saloon and grill in Burbank, ignored him. Tinhorn was sued, fined, and had its health permit revoked. The griddles stayed hot. When the electricity was shut off, they brought in a generator. When the doors were padlocked, they sawed off the latch. In April, the city erected a chain link fence around the restaurant. Now Tinhorn draws weekly rallies featuring “freedom burgers” served on the sidewalk. It's a standoff, the New Yorker wrote, "looking like a battlefield without a battle." 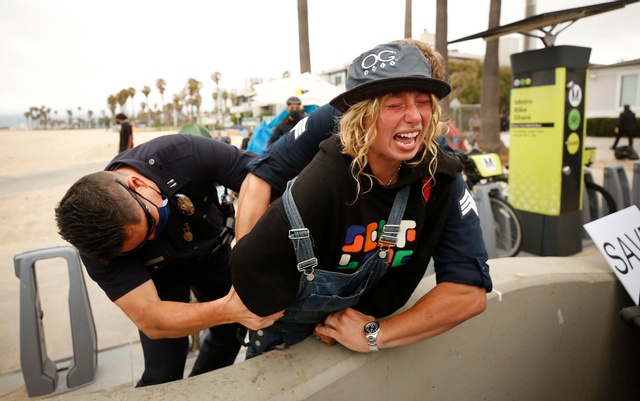 Los Angeles police officers wrestled a knife away from a woman on the Venice Boardwalk on Monday.

The Los Angeles mayoral candidate Joe Buscaino made a campaign stop in Venice on Monday, where locals cheered as he called for clearing the sidewalks and beaches of homeless encampments. "People tell me every day that they no longer feel safe in our city,″ he said. Then, as if on cue, a homeless woman drew a knife a few feet from the candidate and muttered, "I’m gonna start killing people," according to a witness. She was subdued by police with no one seriously injured. L.A. Times | Yo Venice 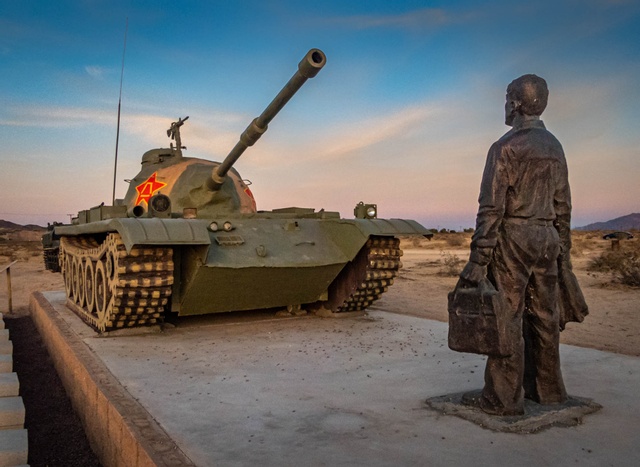 The Tank Man at Liberty Sculpture Park in Yermo.

In a tiny desert town outside Barstow, there's a tribute to the man who stared down Chinese tanks during the 1989 Tiananmen Square crackdown. The Tank Man was added in Yermo in 2019 by the artist Chen Weiming, a Chinese-born New Zealander known for putting his convictions into dramatic action. (In 2011, Chen traveled to Syria to fight alongside Free Syrian Army rebels.) In 2017, he began erecting sculptures on a disused 36-acre parcel in Yermo, adding a sign at the entrance: "No Communists Allowed.” Dubbed Liberty Sculpture Park, it's grown piece by piece. Last Friday, on the anniversary of the Tiananmen uprising, Chen unveiled a work that blames China for the coronavirus. A Republican congressman from New Jersey flew out for the event. Victorville Daily Press

Monday's newsletter misstated a meteorological fact about California. The state has the most divergent sunsets in the continental United States, not the entire nation. Alaska has more divergent sunsets.