The weekend provided a crucial test of whether we can keep our distance as a heat wave prompted thousands of people to flock to Southern California beaches in numbers that lifeguards compared to July Fourth. Images of crowded shorelines drew comparisons to earlier scenes from Florida that inspired the hashtag trend #FloridaMorons. Below, judge for yourself the Saturday crowds at Huntington Beach, first two images, followed by Newport Beach. O.C. Register | L.A. Times 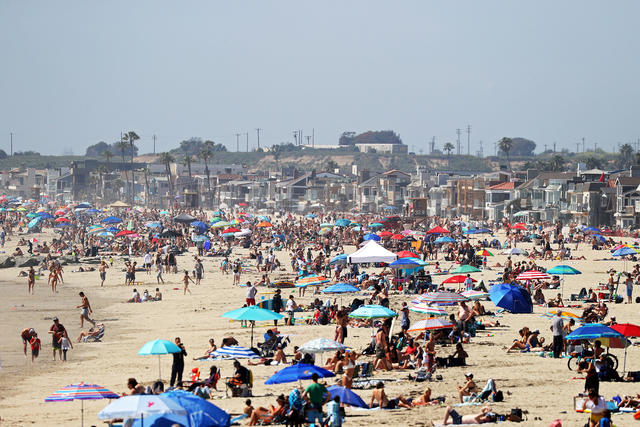 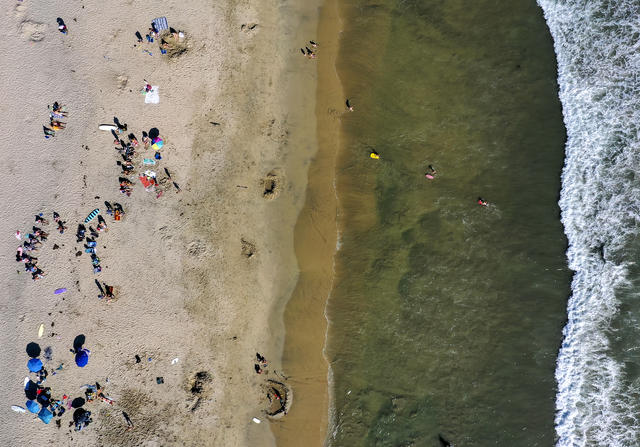 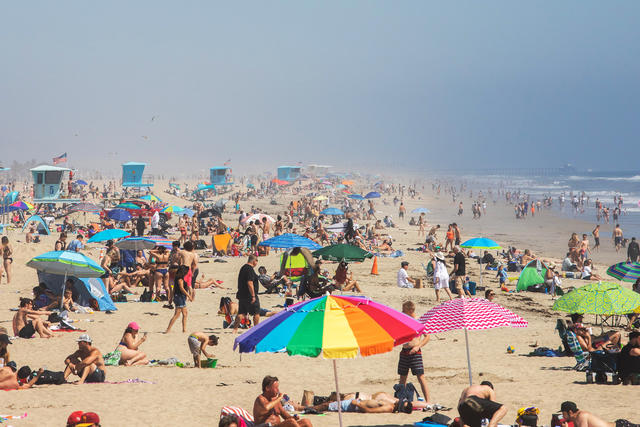 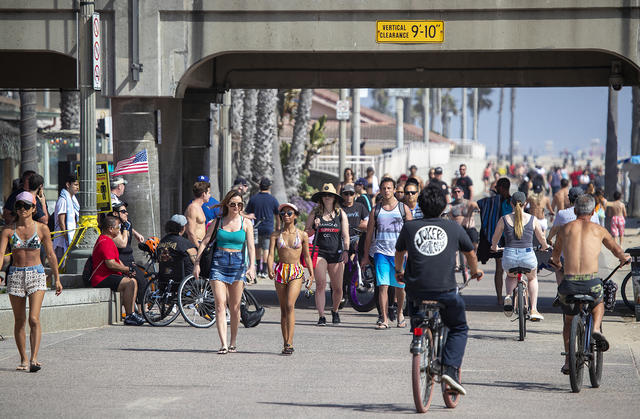 It wasn't just Southern California beaches: Large numbers of people showed up at Central Coast beaches, Bay Area parks, Sacramento riversides, and the Sonoma Coast. You would think parks officials would have lighter workloads under the shelter-in-place order, a Sonoma County official said. "It's almost the opposite ... verbal warnings and everything are through the roof." Press Democrat

Some localities looked to clamp down: Newport Beach moved to possibly close the shoreline on weekends. Monterey County went ahead and reimposed a beach closure. A.P. | Monterey County Weekly 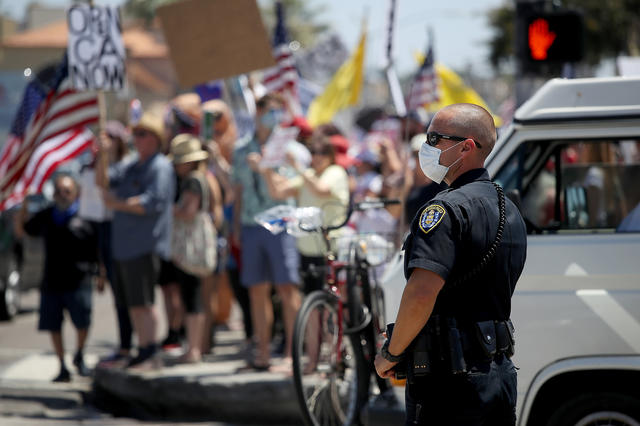 A police officer stood by as protestors rallied in San Diego on Sunday.

The weekend brought a fresh round of anti-lockdown protests in San Diego, Palm Springs, Bakersfield, and San Luis Obispo, with signs held aloft that read "Freedom over fear" and "Covid is a lie." In Encinitas, protesters assembled on a closed beach and refused to leave. Three men were arrested. City News Service | Times of San Diego

Support for the protests appears to be thin. A poll showed that only 11 percent of Californians want to end the stay-at-home order. L.A. Times | Mercury News

It appeared increasingly unlikely that California officials would lift lockdowns soon. Solano and Napa counties extended their orders. San Francisco's mayor said her city was "very likely" to do the same. L.A. County officials have given few hints, saying four key benchmarks must be met first. Gov. Gavin Newsom cautioned against "taking the parachute off before we land." S.F. Chronicle | L.A. Times

Between them, Modoc, Tehama, and Siskiyou counties have had six coronavirus cases. They are pleading with Newsom to let them open on their own timetable. Record Searchlight

Younger black and Latino Californians are dying more frequently of Covid-19 than their white and Asian counterparts, an analysis showed. When accounting for each group's share of the population, black and Latino patients under the age of 65 had higher rates of fatality than even older blacks and Latinos. L.A. Times 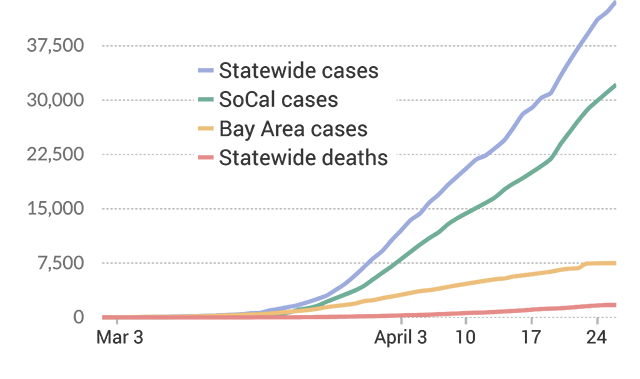 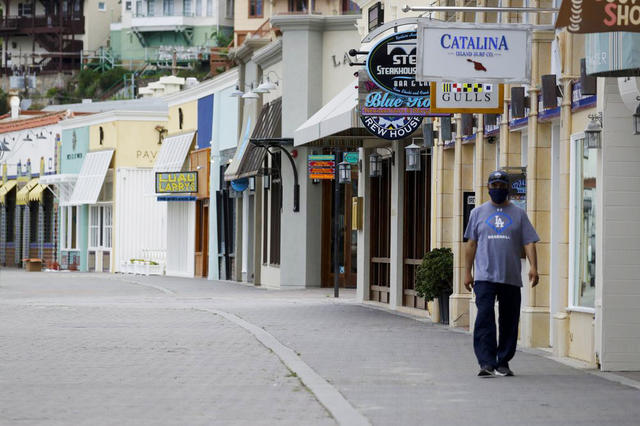 A resident walked down the empty main shopping street in Catalina's Avalon on Saturday.

The gates to Catalina were all but slammed shut last month, sparing the island community from an outbreak. Just two coronavirus cases have been confirmed. But the economy of the tourism-reliant island has been crushed. The hotels are empty and nearly all bars and restaurants are closed. "We're dying here," a 25-year resident said. A.P.

The Sikh community in Riverside has been serving up to 1,400 meals a day to health care professionals and people in need from a drive-through set up outside the Riverside Sikh Temple. They also send meals to nursing homes and hospitals. Lani Valenzuela said her plate of basmati rice, vegetables, herbs, and spices was "like nothing I've ever had before." She added: "But it was very good. These people are really a godsend." Press-Enterprise | L.A. Times

The family of Gunnery Sgt. Diego Pongo, a U.S. Marine killed in Iraq, had to postpone his memorial service last month because of rules against large gatherings. But on Sunday morning, they were surprised by a police helicopter flyover followed by a parade of armored vehicles, patrol cars, and fire engines outside their Simi Valley home. Supporters lined the street, 6 feet apart. Ventura County Star | A.P.

A cash-strapped farming town in Kern County voted to allow a private prison company to convert two state prisons into immigrant detention centers, two months after public opposition appeared to derail the project. Up to half of McFarland's residents are in the country illegally, meaning they could face confinement in the converted cells. N.Y. Times | Bakersfield Californian

The Southern California photographer Patrick Coyne captured incredible footage of dolphins swimming through bioluminescent waters off Newport Beach. In an Instagram post, he called the video shoot, conducted from a whale watching boat, "one of the most magical nights of my life." YouTube | O.C. Register 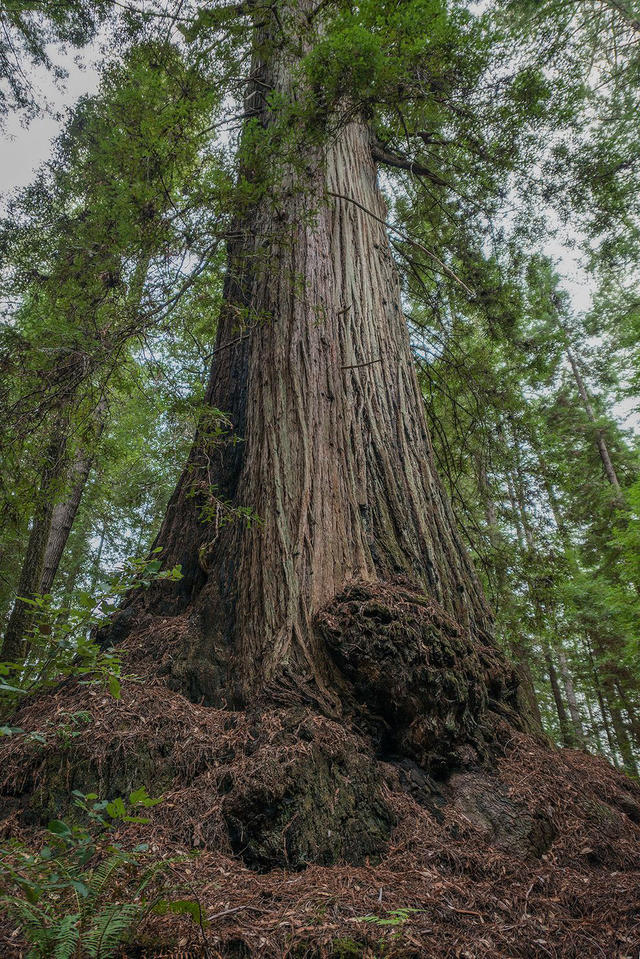 For an example of perseverance in difficult times, consider the McApin tree, pictured above. Scarred by fire and grabbing onto a slope, the massive coast redwood is the oldest known tree of its kind south of Mendocino County at 1,640 years old. It rises from a 730-acre reserve roughly 30 miles northwest of Santa Rosa with old growth redwoods that are older, taller, and more abundant than those of Muir Woods.

For decades, the forest's existence was the stuff of legend. Then, two years ago, the Save the Redwoods League announced that it was acquiring the property from a private owner. The conservation group plans to open the reserve to the public next year. Save the Redwoods | Outside magazine