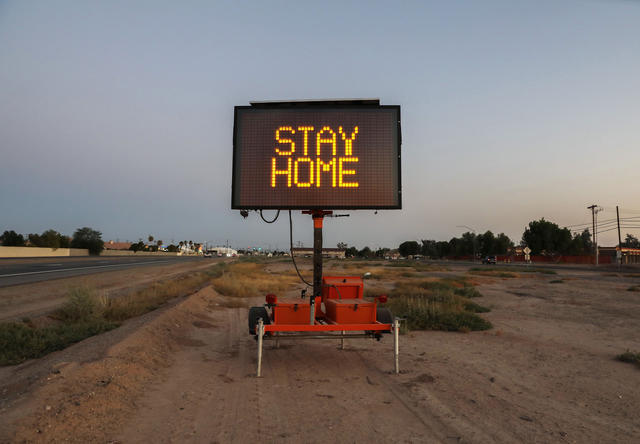 A traffic display warned motorists in El Centro in July.

For many Californians, the warnings of health officials don't seem to be getting through. In Los Angeles, for example, the percentage of people staying home has remained at about 55% since June. Experts say the problem is with the "just say no" approach to curbing the pandemic. As with sex education, they say, "abstinence only" is not effective. L.A. Times

Fresno's City Council has proposed fining residents $1,000 for gatherings of more than 15 people. In a remarkable rebuke, the city's police chief, Andy Hall, assured the public that officers would not enforce the order. "Instead," he said, "the Fresno Police Department will continue to focus our efforts on the violent crime that is plaguing this community." KSEE | Fresno Bee

First the estimate was $140 million. Then $400 million. Now Bank of America says unemployment fraud in California could total $2 billion. The bank, which issued debit cards containing unemployment benefits, told lawmakers it detected suspicious activity in more than 345,000 accounts. "It is like they have opened up a bag of cash in the middle of a tornado and hoped that it ends up someplace where it is supposed to be,” a tax activist said. L.A. Times | Sacramento Bee 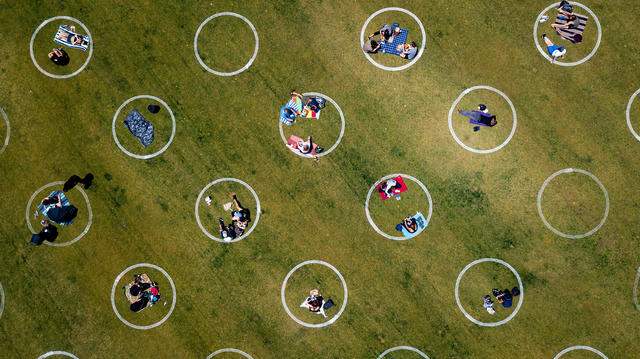 Social distancers in San Francisco over the summer.

Starting Thursday, Californians will be able to use an app that tells you when you've been exposed to someone with Covid-19. CA Notify relies on tech from Apple and Google that uses Bluetooth to detect when two devices have been within 6 feet of each other for more than 15 minutes. The more people who use it the more effective it will be. The Verge | S.F. Chronicle

On his first day in office, Los Angeles's County's new district attorney, George Gascón, announced a dizzying array of new policies. Among them:

Gascón implored both protesters and police to "join me on this journey." LAist obtained text messages among prosecutors that signaled strong resistance to the new regime. "This office is in an uproar," one read. Another: "He is NOT WELCOMED." L.A. Times | LAist 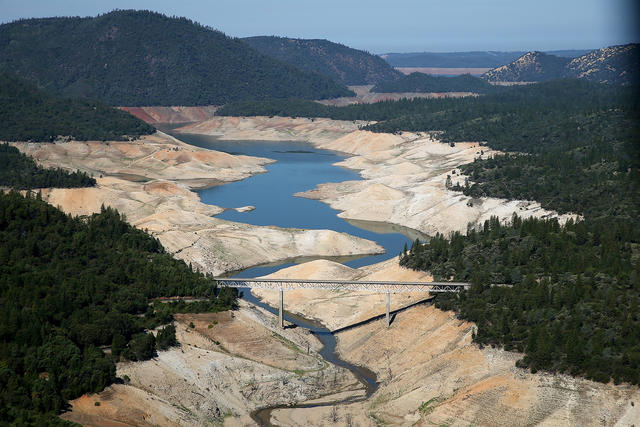 Lake Oroville during the drought in 2014.

Police officers with college degrees, according to studies, are less likely to resort to force. Other research shows that the part of the brain that manages impulse control doesn't fully mature until about age 25. For those reasons, a state lawmaker on Monday introduced legislation that would require California police officers to either have a bachelor's degree or be 25. Sacramento Bee | CBS13

Elon Musk has moved his private foundation from California to Austin, Texas, the latest sign that the Tesla CEO may himself be relocating. The news follows reports that Musk told friends that he is planning to move to Texas. In a recent tweet, he said he loves California. "But, frankly, I think CA has the winning-for-too-long problem. Like a sports team with many championships, it is increasingly difficult to avoid complacency & a sense of entitlement." Bloomberg | Austin American-Statesman

Also moving to Texas: Hewlett Packard Enterprise, a company whose roots go back to the founding of Silicon Valley. CNN | A.P. 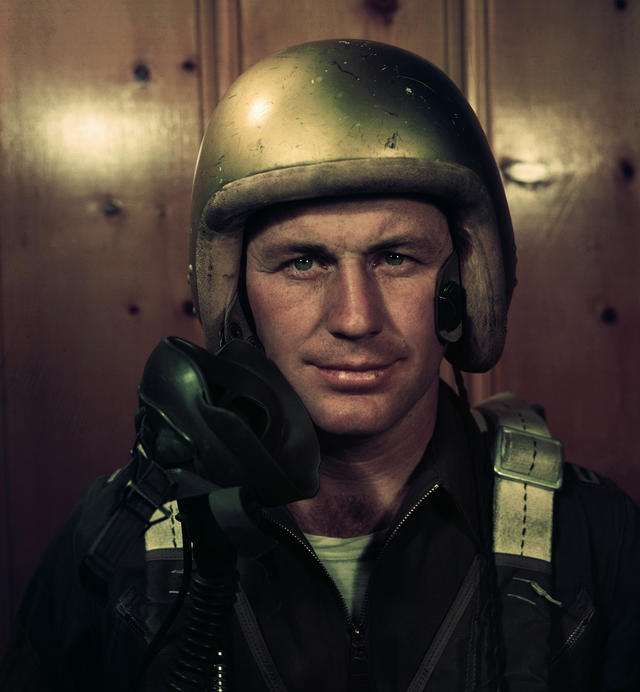 Chuck Yeager died on Monday at a Los Angeles hospital. The famed aviator was a self-described West Virginia hillbilly, but he achieved fame in California as a military test pilot at Muroc Army Air Field, now Edwards Air Force Base. In 1947, Yeager became the first man to break the sound barrier with a flight over the Mojave Desert. After retirement, he lived for many years in Penn Valley, a small town in California’s Gold Country. He was 97. The Union | L.A. Times 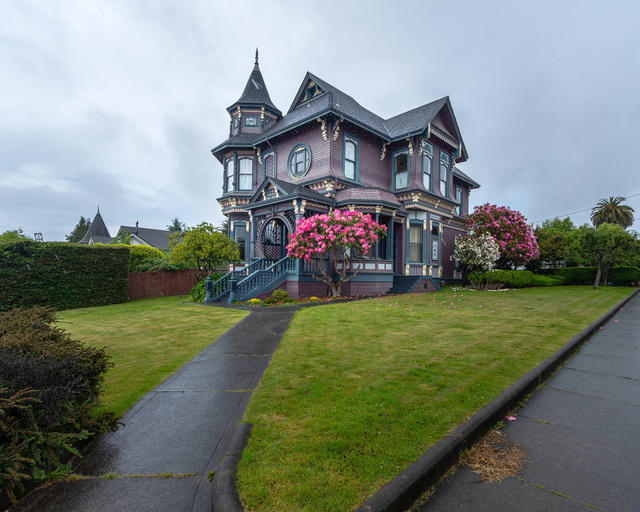 ☝️ This is a real house in Humboldt County.

Plum-purple with sweeping curves, Arcata’s Bair-Stokes House suggests some mythical beast. It was built during the timber boom of the 1880s, when wealthy settlers indulged in flamboyant Victorian homes. Hundreds of them still stand, though many fell in disrepair. Few have been restored so gloriously as the Bair home, now regarded as among the finest examples of the Queen Anne style anywhere in the West. 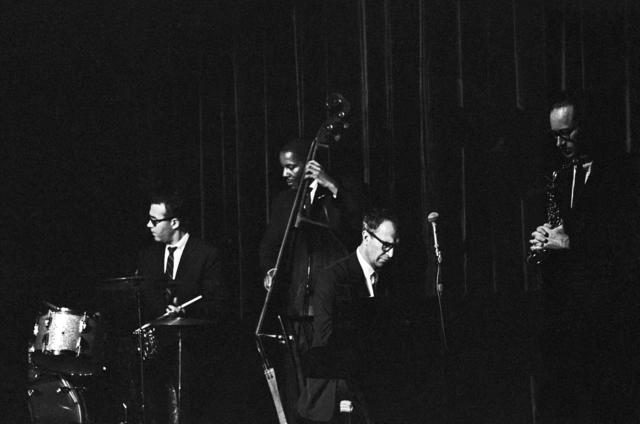 Dave Brubeck, at piano, and Eugene Wright, on the bass, played with the quartet in Copenhagen in 1961.

Dave Brubeck was born in the Bay Area 100 years ago this week.

The jazz pianist was wildly popular in the 1950s and 60s, best known for his jaunty, oddly-metered song “Take Five,” included on the first jazz album to ever sell a million copies.

Brubeck, a white man, recognized that his success stood in contrast to that of many Black jazz musicians, whose paths were impeded by racial animus from the media, concert venues, and the recording industry.

He became a forceful opponent of discrimination, famously canceling a tour of Southern colleges in 1960 after they demanded he swap out his Black bassist, Eugene Wright. The decision cost the group $40,000. "That was a blow," Brubeck later told an interviewer, "because I needed that work at that time."

Two years earlier, in 1958, when Wright was a new addition to the band, Brubeck's quartet came to East Carolina University in North Carolina at the invitation of students. During a sound check, an administrator caught sight of Wright.

Informed of a university policy barring Black performers, Brubeck refused to go on without Wright. They came to an impasse. As the concert was delayed, students in the packed auditorium began pounding their feet. The university president, John Messick, phoned the governor.

"We don't want another Little Rock," Messick said, referring to the segregation standoff that had unfolded in Arkansas just five months earlier. The band could play, he told Brubeck finally, but only on the condition that Wright stay in the background. Brubeck agreed, lying.

Early in the show, the pianist brought Wright up front to the announcer's mic, where he played a solo that sent the crowd into a frenzy. "We integrated the school that night," Brubeck said.

That's hardly an exaggeration. The performance so galvanized the students that they pressured the university trustees into reversing the ban on Black performers. East Carolina's first Black student was admitted four years later.