More than a dozen firefighters battling a wildfire along the Big Sur coast were forced to deploy portable fire shelters, a last-resort survival tactic, as they were overrun by flames on Tuesday. Three had to be airlifted to a hospital, where one was in critical condition, officials said. Driven by strong winds, the massive Dolan fire nearly doubled in size between Monday and Tuesday. SFGate.com | A.P. 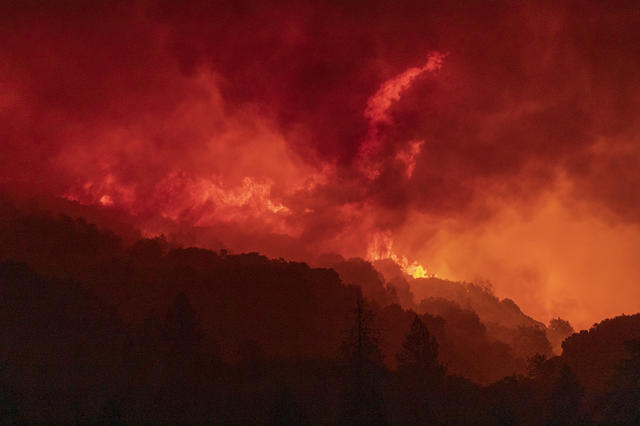 The Creek fire burned out of control near Shaver Lake on Tuesday.

Military helicopters on Tuesday extracted more than 100 hikers and campers hemmed in by the sprawling Creek fire in remote locations of the Sierra Nevada. A Blackhawk pilot said the smoke and flames were unlike anything he'd experienced in the military. “I’ve been flying for 25 years,” he said. “We get occasionally shot at overseas during missions. It’s definitely by far the toughest flying that I’ve ever done.” N.Y. Times | L.A. Times

The Washington Post noted how California has essentially been defined by its mega-fires over the last four years.

Here's what Northern California and Southern Oregon looked like on Tuesday. 👇

Gov. Gavin Newsom on Tuesday: "I say this lovingly — not as an ideologue, but as someone who prides himself on being open to argument, interested in evidence — but I quite literally have no patience for climate change deniers. It's completely inconsistent, that point of view, with the reality on the ground, the facts as we are experiencing. You may not believe it intellectually, but your own eyes, your own experiences tell a different story." Politico 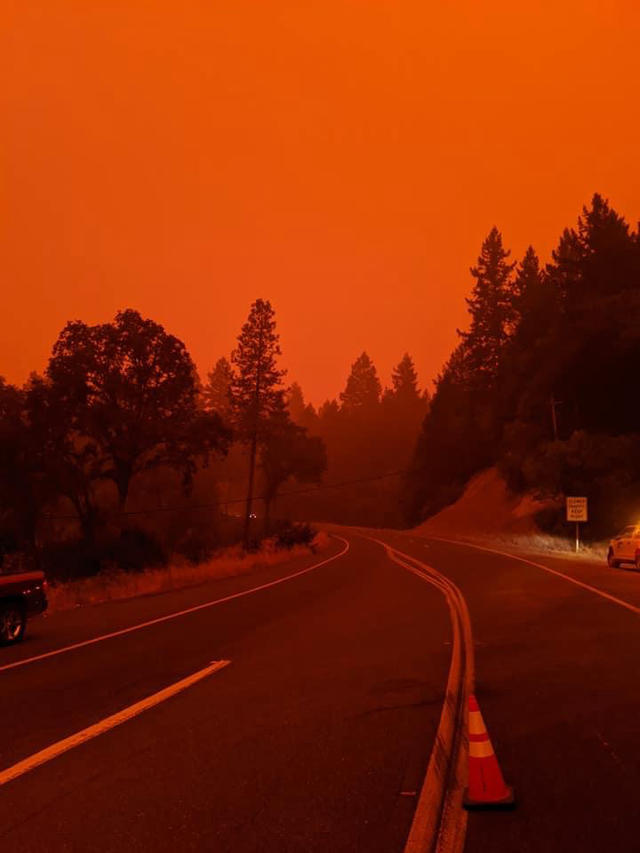 Since the weekend, parts of the state have been draped by an otherworldly reddish-orange glow so thick that some motorists have been forced to use their headlights in the middle of the day. The pumpkin color, experts say, results from the inability of shorter wavelength light, such as blues and purples, to push through smoke particulates, leaving only longer wavelength oranges and reds. Press Democrat | Fresno Bee

Fire officials were bracing for strong winds over the next couple days. In Northern California, where PG&E preemptively cut power to thousands of homes, forecasts called for extremely dry air and steady winds between Tuesday and Thursday. Arid Santa Ana winds that began whipping Southern California on Tuesday were expected to pick up again on Wednesday. CBSLA | Mercury News 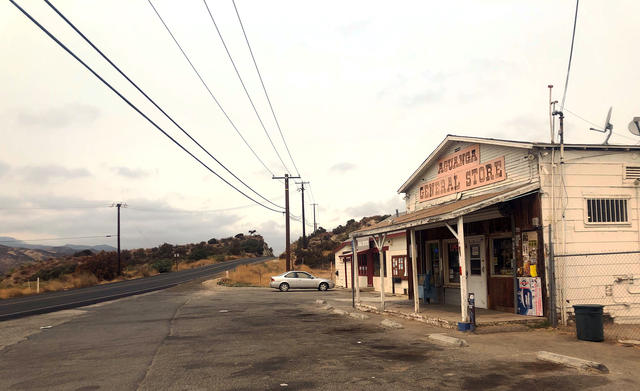 A general store in Aguanga, where seven people were found fatally shot on Monday.

Seven people were fatally shot early Monday at a rural Riverside County home that authorities said housed an illegal marijuana-growing operation. Officials said more than 20 people lived on the property, which had several makeshift dwellings and a nursery. All seven victims were Laotian. “This was not a small operation,” the Riverside County sheriff said. “This is a very organized-crime type of an operation.” A.P. | L.A. Times

As California’s rate of coronavirus infections keeps falling, health officials announced the loosening of restrictions across more of the state. That means three of the state's most populous counties — San Diego, Orange, and Santa Clara — are now cleared for indoor dining and moviegoing. Gov. Gavin Newsom said hospitalizations statewide had fallen to about 3,100, the lowest total since mid-June. “If those appear to be promising numbers, it’s because they are,” he said. A.P. | O.C. Register

Bob Fenenbock spent nearly 30 years in prison for the 1991 murder of a Trinity County man. His conviction was overturned last year after it was shown that a 9-year-old boy had been coaxed into giving false testimony. But then prosecutors moved to retry Fenenbock. Now a Solano County judge has dismissed the case, accusing a lead police investigator of “untruths, lies, deception, and coercion.” Fenenbock's response: “I’ve been screaming this in a cell for 28 years.” Mercury News 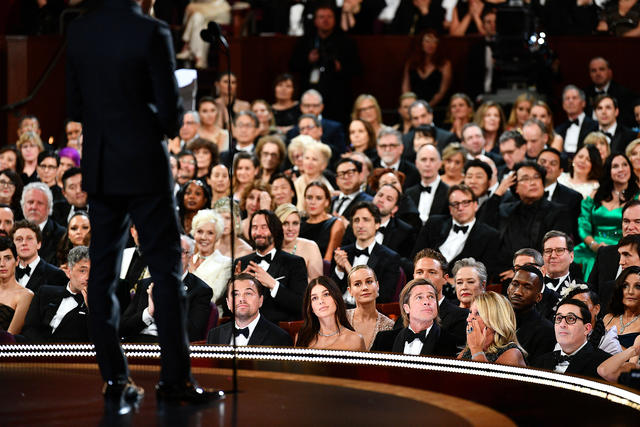 Hollywood has been under pressure to diversify its ranks.

The Academy of Motion Picture Arts and Sciences said it was adding a diversity component to the Oscars. Films hoping to qualify for the best picture category must meet at least two standards across four categories. For example, at least one of the lead actors or a significant supporting actor would have to be from an underrepresented racial or ethnic group. N.Y. Times | Hollywood Reporter

Sorry, kids. Trick-or-treating is a no-go this year in Los Angeles County. Health officials announced Tuesday that the door-to-door tradition is banned because social distancing would be impossible. The suggested alternatives: Car parades and online parties. CNN | CBSLA 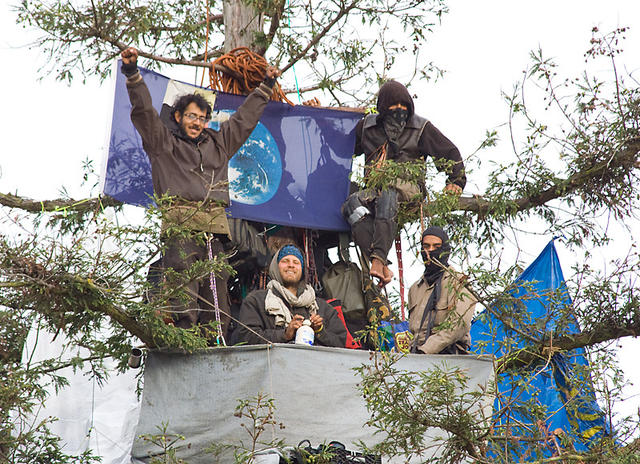 A group of tree-sitters occupied a redwood tree on UC Berkeley's campus between 2006 and 2008.

It was on this day in 2008 that the great Berkeley live oak rebellion ended in defeat.

A football-crazy institution, the University of California was desperate for a modern sports training facility in the early 2000s. The perfect place to put one, it decided, was next to the football stadium in a plot that also held a grove of stately trees — redwoods and pines, but mostly coast live oaks.

Berkeley had a law on the books prohibiting the removal of any live oak with a trunk wider than 6 inches. But the city had no jurisdiction over the university campus. The trees were doomed.

So it was that a group of protesters, inspired by the resistance campaigns of the Humboldt timber wars in the 1990s, climbed into the limbs of the grove in the winter of 2006 and vowed to stay there as long as it took to save the trees. 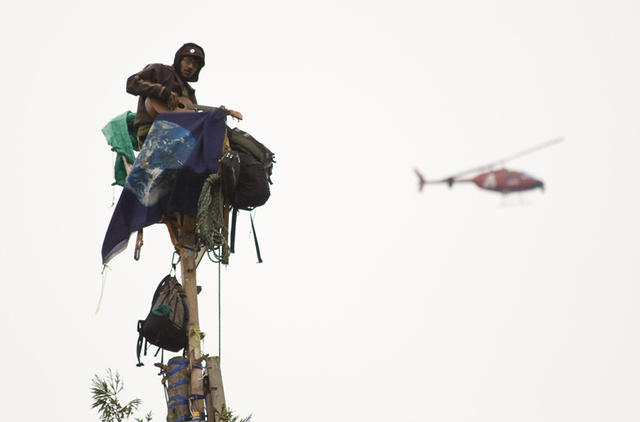 A protester passed the time with his guitar as a helicopter observed the standoff from overhead.

On the ground, allies of the tree-sitters fought the project through the courts. But by September of 2008, their legal challenges were exhausted. The university promptly severed all of the branches below the tree-sitters' redwood perch and halted their food deliveries.

With no way to climb up or down, the four remaining protesters were forced to crawl onto a scaffolding erected to reach them and return to earth, concluding the longest urban tree-sit in history. The redwood was felled the same day.

The authorities, grateful to have the matter settled, declined to slap the protesters with serious charges. Over the next several years, the $150-million sports facility rose as planned, a gleaming monument to the clout of college sports.

Below, see more pictures from the tree-sit's final day by Sean Goebel, a photographer who was a Berkeley student at the time. His full series of photos is here. 👉 sgphotos.com 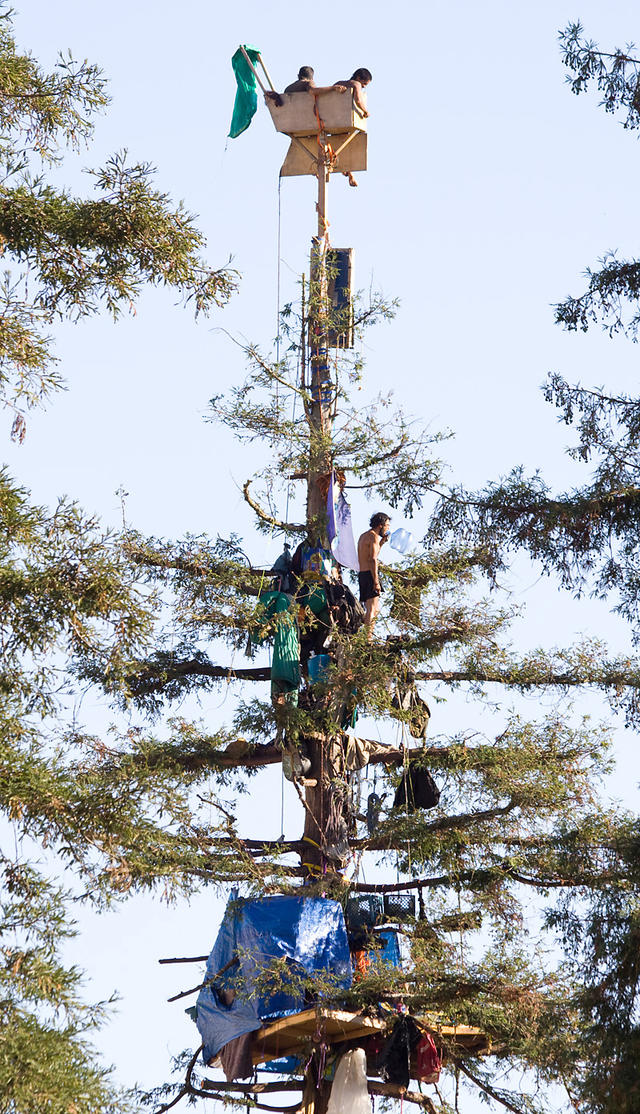 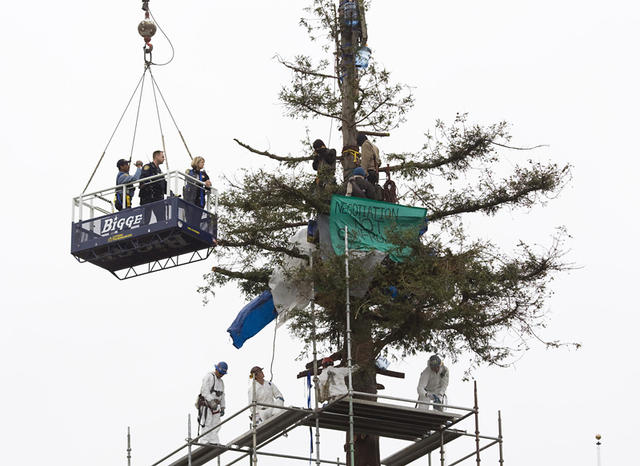 Police negotiators tried to talk the protesters into leaving the tree peacefully. 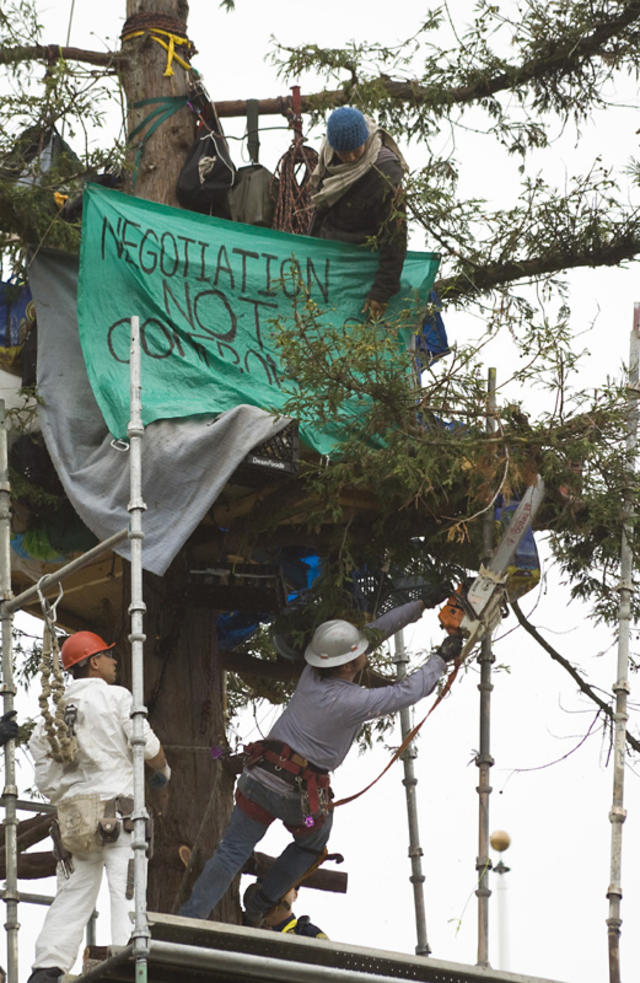 A crew removed branches from the tree, stranding the protesters. 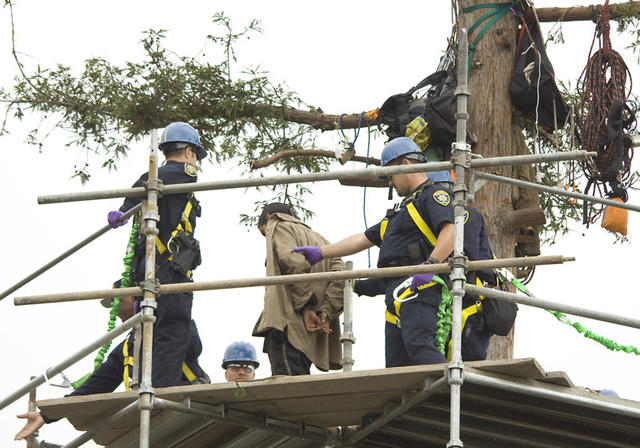 One of the tree-sitters was arrested. They faced misdemeanor charges.

An earlier version of this newsletter included an item on wind forecasts that linked incorrectly to an L.A. Times article from 2019. It also gave an incorrect forecast. Santa Ana winds were expected to whip Southern California on Tuesday and Wednesday, not Thursday and Friday.