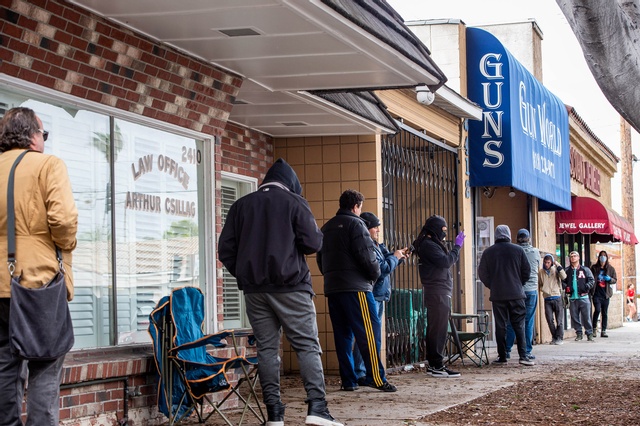 Shoppers lined up to buy firearms at Gun World in Burbank on March 17, 2020.

"An arms race in America."

Californians' appetite for guns surged during the pandemic — and it hasn't abated. Prior to 2020, California reported roughly 100,000 federal background checks a month, a proxy for gun purchases. Since then, the number has averaged roughly 140,000 a month, with nearly a third of buyers arming themselves for the first time. “Usually it slows down," Dr. Garen J. Wintemute, a gun researcher, said of the national buying spree. "But this just kept going.” Sacramento Bee | N.Y. Times 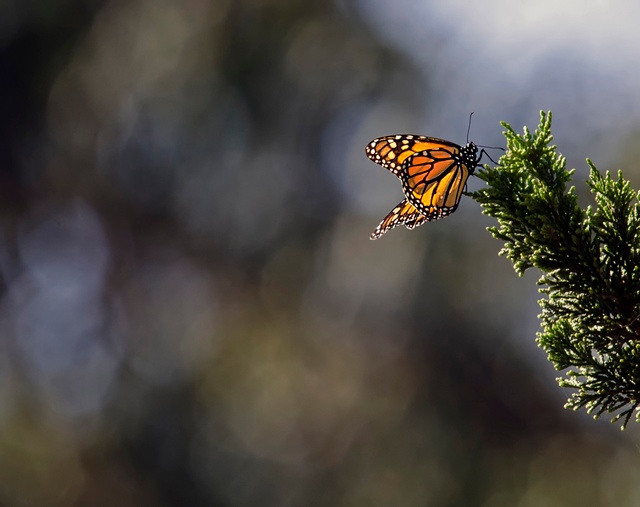 California's graceful monarch butterfly has been spiraling toward extinction for years. Now the crisis has led to the largest coordinated response yet to save the species: a $1 million effort to plant 30,000 native milkweed plants — which the butterflies need to lay eggs — at locations across the state. “There couldn’t be a more critical time to be doing this,” a biologist said. S.F. Chronicle | A.P.

Meteorologists said a number of heat records could fall across the Central Valley on Tuesday as the first significant heat wave of the year roasts California. High temperatures were expected to run up to 20 degrees above normal, well into triple digits. Forecasters said it was unusual to have such an intense heat event this early in the year. CNN 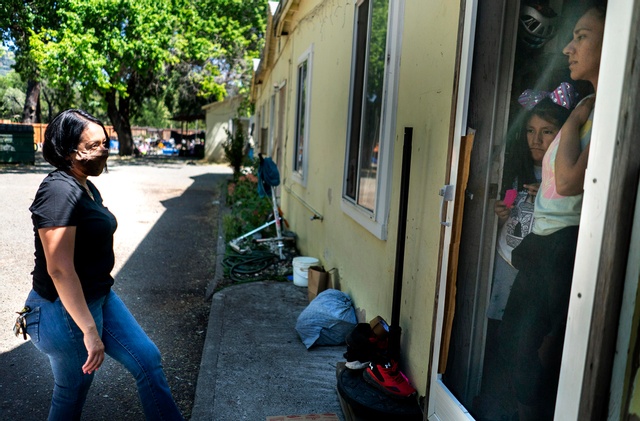 Mayra Arreguin visited a farmworker family in Cloverdale on May 13.

Anti-vaccine conspiracy theories have been rippling through farmworker communities in Northern California's wine country for months. Some believe vaccines cause infertility, or that they are embedded with microchips to track people in the country illegally. Here's the moving story of Mayra Arreguin, a volunteer who is trying to win over holdouts using the trust she's earned, conversation by conversation. 👉 Washington Post

“This is a permanent game changer in the housing market.”

At River Islands, a master planned community built around 13 man-made lakes south of Stockton, transplants from the Bay Area are subjecting themselves to multi-hour commutes in exchange for homes they can afford. It's part of a national exurban housing boom that is stretching the boundaries of cities and their surrounding sprawl. N.Y. Times

In rural Sierra County, just north of Lake Tahoe, there is a Jim Crow Canyon, Jim Crow Creek, and Jim Crow Road. A campaign to change the road's name has divided the community, with opponents calling it another example of “woke cancel culture.” Jim Steinbarth, a resident of Jim Crow Road who wants the name changed, said it's awkward giving out his address. "There’s a little twinge when you’re saying it,” he said. L.A. Times 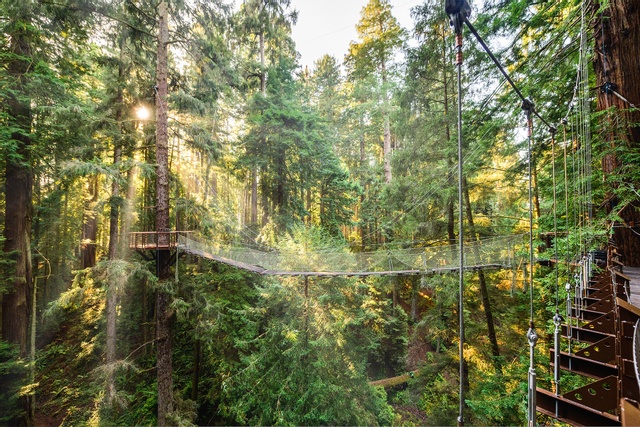 The Redwood Sky Walk is not not far from the filming locations of the Forest Moon of Endor.

You can now experience the North Coast's redwoods from the perspective of a spotted owl. The just-opened Redwood Sky Walk is the longest skywalk in the Western United States at a quarter mile, suspended 100 feet off the ground in an old-growth nature preserve. It's located on the edge of Eureka's Sequoia Park Zoo, which means the walk there is lined with bush dogs, spider monkeys, and red pandas. Lonely Planet 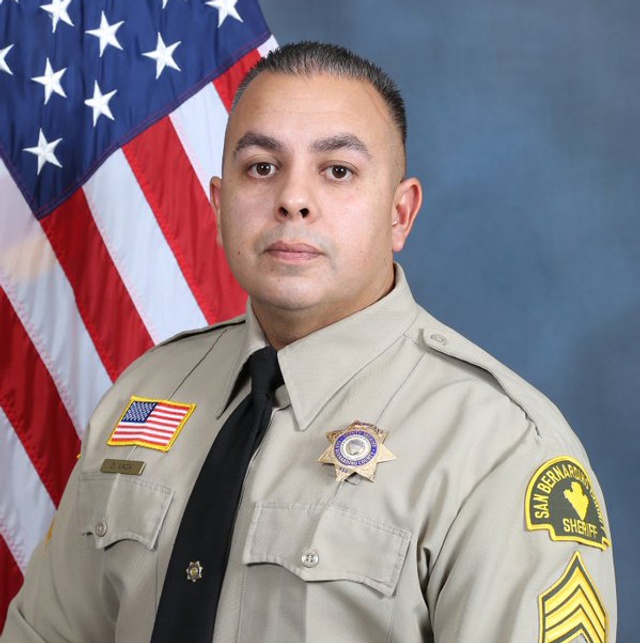 A San Bernardino County sheriff's deputy was fatally shot after a high-speed chase in Yucca Valley on Monday, the authorities said. Deputies had attempted to pull over a motorcyclist with no license plate when the suspect fled, officials said. At some point, the man bailed out of the motorcycle and fled on foot, trading fire with the officers. Both the suspect and Sgt. Dominic Vaca, 43, ended up dead. San Bernardino Sun | KESQ

Students are bringing their grief and anxiety from the pandemic into the classroom, and teachers are untrained on how to handle it. The L.A. Times gave the example of eighth-grade math teacher Jessica Bibbs-Fox at Kelly Elementary in Compton. Students who once entered her class bursting with energy are now silent and withdrawn. Every single student in her homeroom class has an F. “I’m not prepared to handle all the different varieties of trauma,” she said. “And yet I’m being held responsible for it. It’s a stress I can’t even describe.”

Videos of what the Pentagon calls “unidentified aerial phenomenon” off San Diego and the East Coast have invigorated UFO enthusiasts. But skeptics say the strange objects can be explained by camera quirks and other less sexy phenomenon. “There’s nothing new here, it’s the same grainy videos we’re used to seeing,” said Michael Shermer, the founding publisher of Skeptic magazine. S.D. Union-Tribune 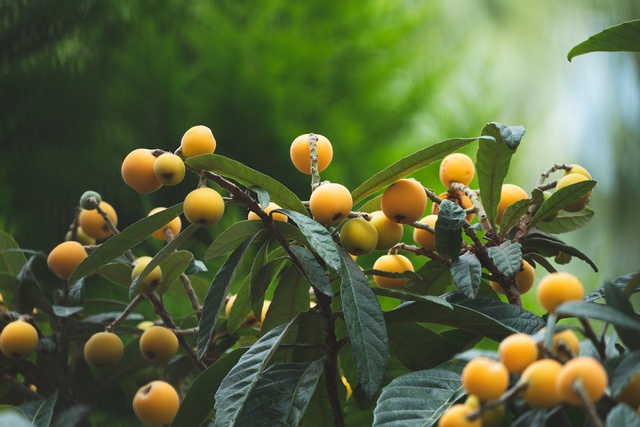 Los Angeles is full of free fruit, including delicious loquats.

In some Los Angeles neighborhoods, you can hardly walk more than 100 feet without passing a loquat tree. Yet it's common to see loquat branches buckling under the weight of their delicious ripe fruits, free for the taking yet unpicked. “Nobody eats them,” said Alissa Walker, a Los Angeles–based journalist and loquat enthusiast. “They just hang on the trees, and I’m like, ‘Is anyone going to eat these?’” Atlas Obscura 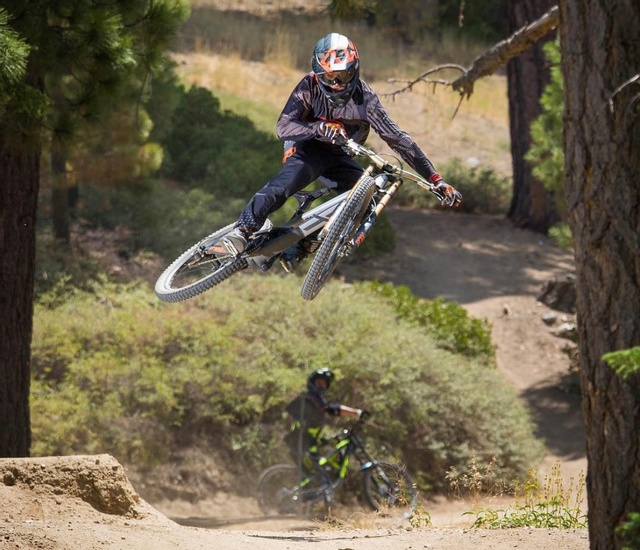 … Christopher Toms, an L.A.-based storyboard artist for the animated sitcom “American Dad” — and a biking enthusiast.

What is one place everyone should visit in California?

The desert. Any desert. Every desert. It's vast, empty, and harsh but also incredible. A lot of people don’t find it appealing because of that but it’s one of the few places you can be really free and get away from everyone. So much space and nothingness.

“Swans: Sacrifice and Transcendence.” Quick and easy read with really good insight into the Swans’ songwriting and how the band worked.

Also the Relative Unknown podcast. It's about bikers and drug smuggling; some of the story takes place in eastern North Carolina, and some of the people wrapped up in it were friends of my parents.

Not totally “hidden,” but Taco Zone in Echo Park has been one of my favorite food trucks forever.

Huey P. Newton, Tookie Williams, and Ronald Reagan. I don’t think the conversation would need me to get started. Or maybe artist Steven Arnold, designer Rick Owens (and Michelle!), and Goddess Bunny. There would be so much to talk about I can’t imagine it needing any prep.

What's an aspect of working on an animated show that people watching it would never imagine?

The amount of time that things take. From writing all the way to animation and finally audio and post it can be a long process. It’s also a much smaller industry than people would maybe think, so it’s important to try and never burn bridges.