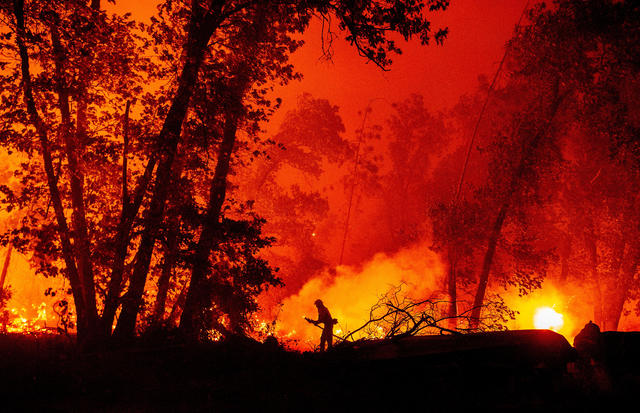 A firefighter battled the Creek Fire in Madera County on Monday.

The residents of Big Creek faced an uncertain future on Monday after the ferocious Creek Fire barreled through their tiny community in the Sierra National Forest northeast of Fresno. The principal of a local school told the Fresno Bee that he escaped with some photo albums and a few other things. “About half the private homes in town burned down,” he said. “Words cannot even begin to describe the devastation of this community.” Fresno Bee | L.A. Times | N.Y. Times

With a forecast of dry winds threatening to fan flames this week, the U.S. Forest Service took the dramatic step of closing all eight national forests in the southern half of the state. PG&E, worried about its power lines, began cutting electricity on Monday across a region stretching from wine country to the Sierra foothills. The utility said roughly 172,00 customers — serving more than 500,000 people — could face outages lasting through Wednesday. Sacramento Bee | A.P. 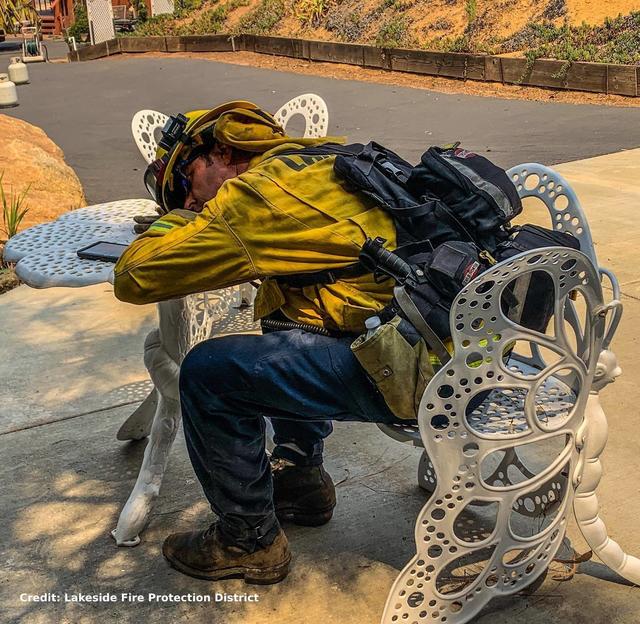 A firefighter passed out after fighting the Valley Fire in Southern California for 26 straight hours.

Other fast-growing blazes across the state:

With the outburst of new wildfires over the weekend, more than 2 million acres of California have burned so far this year — more than in any single year during the modern era. And that's before the start of the most dangerous part of the traditional fire season. If you combined the land area of California's 25 largest cities — from Los Angeles to Moreno Valley — you still wouldn't match the total amount scorched. A.P.

Here's how California looked from space on Sunday. 👇

Gif created from video by NOAA. 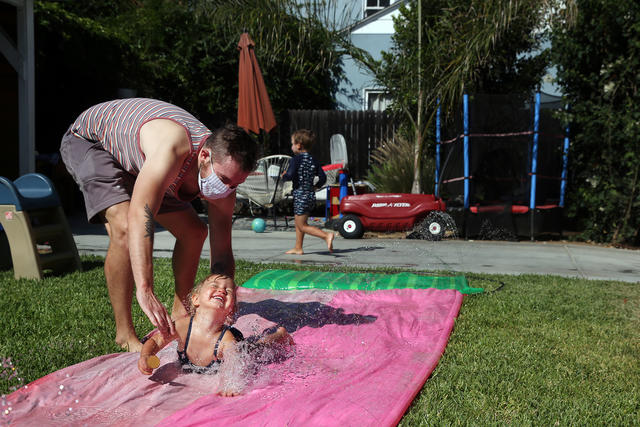 The Cook family stayed cool in their yard in Los Angeles on Saturday.

California just experienced one of its hottest weekends ever observed. As temperatures peaked Sunday afternoon, records fell in dozens of places across the state, among them Oxnard, Riverside, Palm Springs, San Luis Obispo, San Francisco, Stockton, and Sacramento. The most eye-popping reading came from the San Fernando Valley, where the neighborhood of Woodland Hills surged to 121 degrees, the highest temperature ever recorded in Los Angeles County. Washington Post | L.A. Times

A crowd of roughly 3,000 worshippers gathered outside the Capitol in Sacramento on Sunday for a service led by Pastor Sean Feucht, who has been holding Christian concerts in defiance of coronavirus orders. Almost no one wore a mask. Among the attendees was California's Senate Republican leader Shannon Grove, who is supposed to be in quarantine after a colleague tested positive for Covid-19. Sacramento Bee | CBS13

See a drone view of the crowd. 👉 @seanfeucht

Some hedonists were no better behaved. More than 1,000 people gathered on the beach in San Francisco for a makeshift Burning Man celebration. "This was absolutely reckless and selfish," Mayor London Breed tweeted. SFist | CNN

For years, Dr. Tara Zandvliet has been the doctor of choice among vaccine skeptics in San Diego, writing roughly 1,000 vaccine exemptions for children between 2016 and 2019. Now California has placed her on three years of probation for gross negligence and unprofessional conduct. Also, every one of those 1,000 exemptions is now invalidated. CalMatters | Voice of San Diego 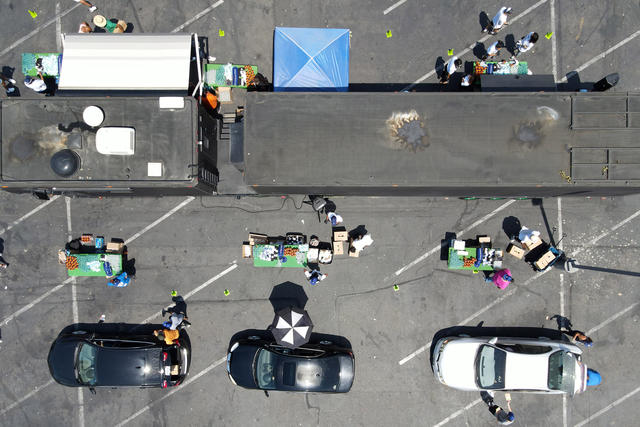 Vehicles lined up for a giveaway of food and supplies in Compton on Aug. 16.

California on Monday started sending a $900 supplemental unemployment benefit to 3.1 million residents forced into joblessness by the pandemic. The lump-sum payment, along with two future weekly payments of $300, will provide some desperately needed relief after a $600 weekly federal benefit expired in July. L.A. Times | ABC7 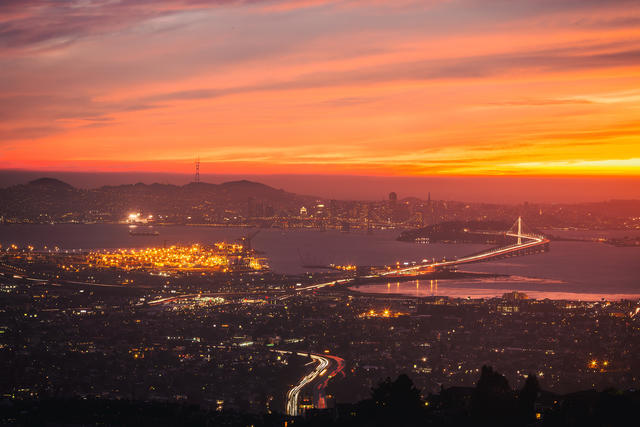 A number of people who are leaving San Francisco said they planned to come back after the pandemic.

Now that remote work has been widely adopted, many residents of San Francisco don't want to live there anymore. Rents are down 14%. And San Francisco’s “demand score,” or the relative interest in sale listings compared to other markets on Realtor.com, has fallen from 89 to 6 on a 100-point scale. S.F. Chronicle

Tim Vega, a postal carrier, worked the same route in Santa Rosa for 36 years. On his last day, he discovered a balloon tied to each mailbox on the route. He called his wife, telling her to come see. “I’ve never seen anything like it,” he said. Unbeknownst to him, she was already waiting up the street with 70 residents from the neighborhood. When he pulled up, a great cheer rose. Press Democrat 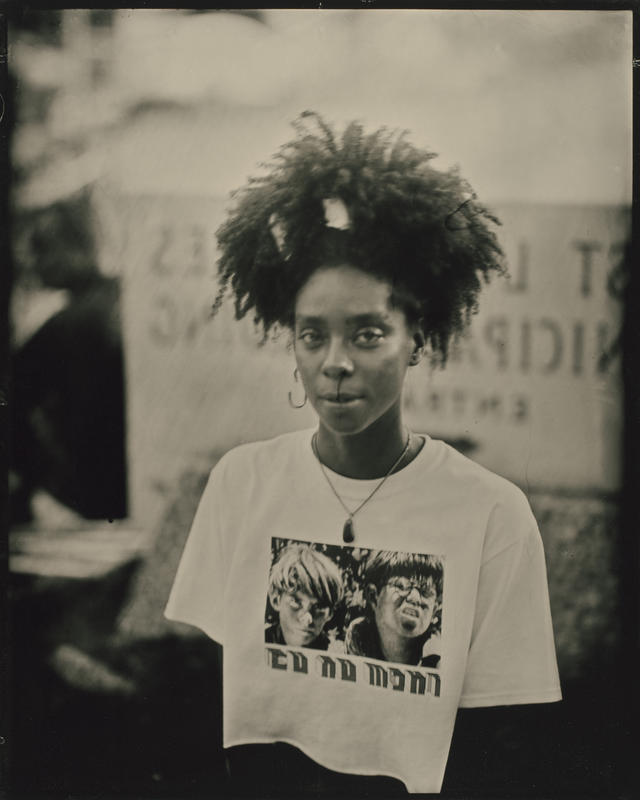 Jenny Sampson, a Berkeley photographer, had been taking pictures of skateboarders for years. Then one day in early 2017, during a visit to a skate park in Emeryville, a new phenomenon caught her eye: about half a dozen young female skaters holding their own in a subculture traditionally dominated by men. Sampson shared a series of vintage-style images from her new book, "Skater Girls." 👉 California Sun 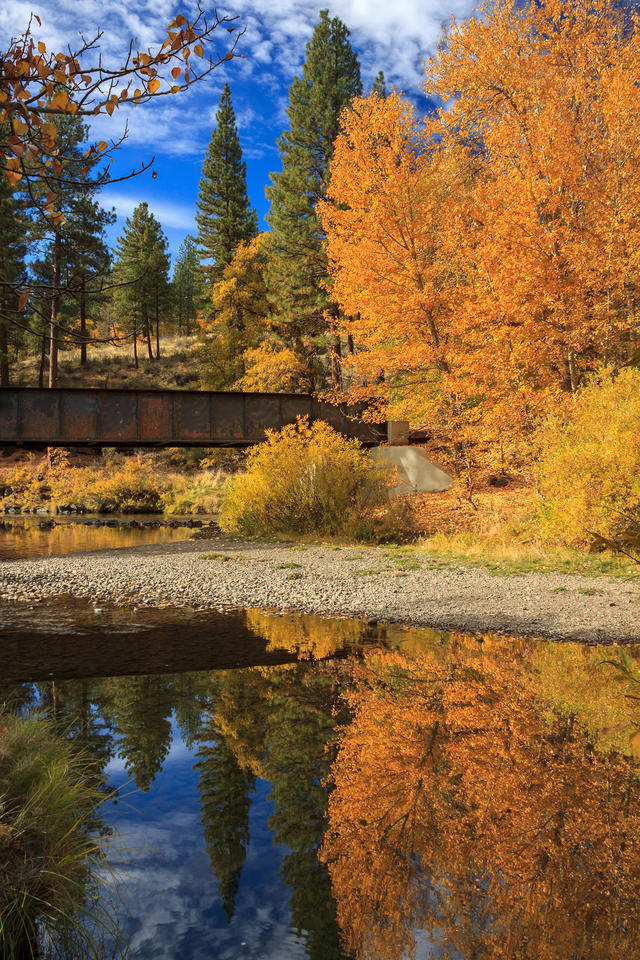 The Bizz Johnson trail is one of California's prettiest trails that no one knows about. A converted railroad line, the route weaves 25 miles along the Susan River canyon in Lassen County, featuring 12 historic trestles and two tunnels. Regulars say a visit in October, when the aspens and cottonwoods don the golds of autumn, is simply euphoric. BLM.gov | Hiking Project 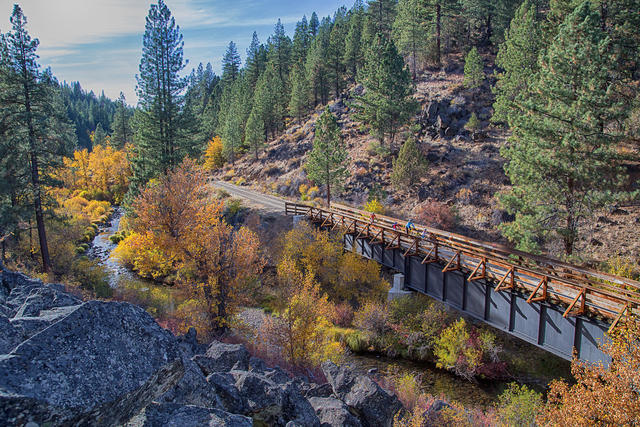 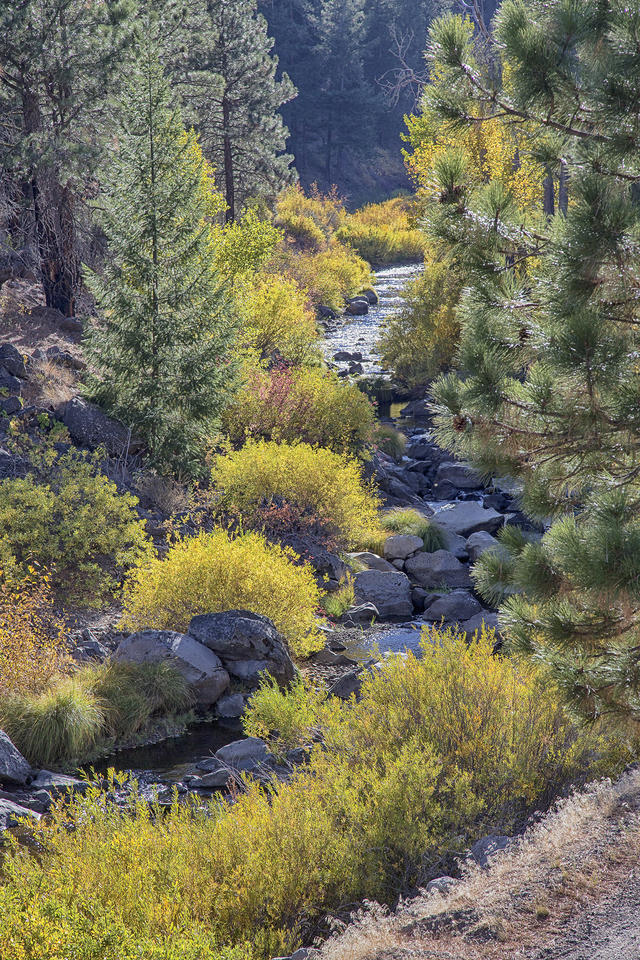 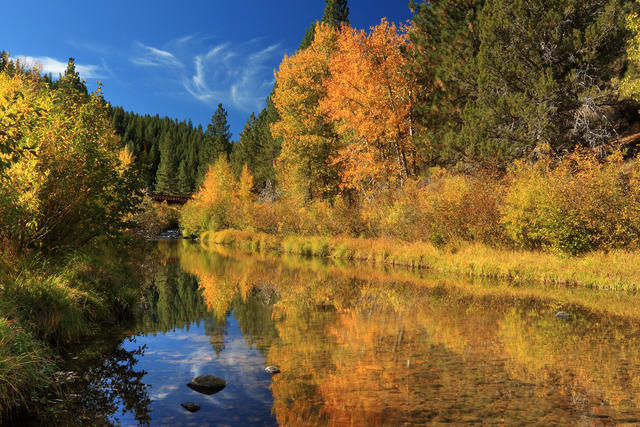 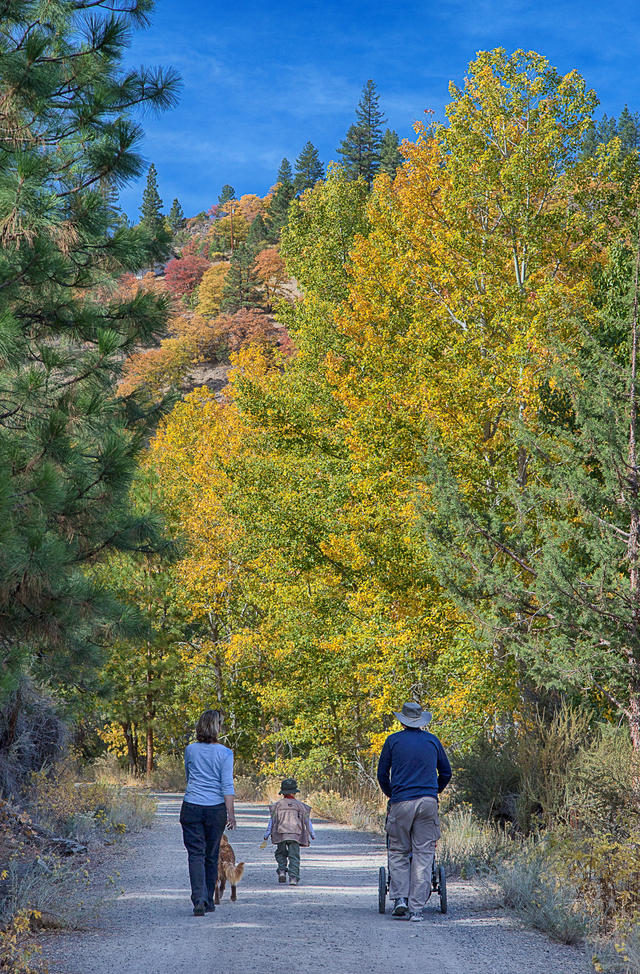 An item in an earlier version of this newsletter included a crowd estimate of 12,000 for a worship gathering in Sacramento on Sunday. The true number, according to the CHP, was closer to 3,000.