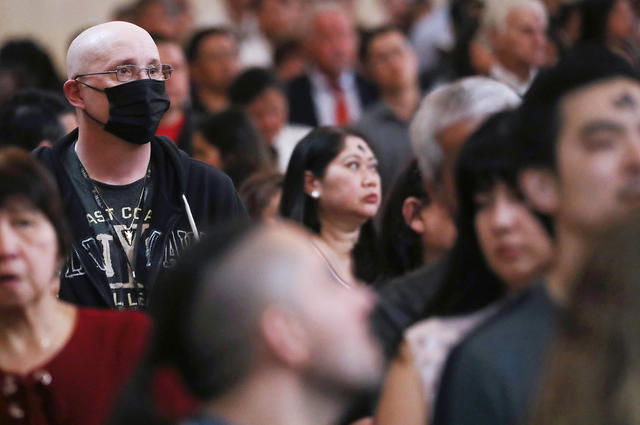 Worshippers attended an Ash Wednesday service at Cathedral of Our Lady of the Angels in Los Angeles.

A Bay Area resident has contracted the novel coronavirus without traveling overseas or coming into contact with anyone known to be infected — the first sign that the disease may be spreading silently within an American community. "It probably means there are many more cases out there," a public health official said, "and it probably means this individual has infected others, and now it's a race to try to find out who that person has infected." S.F. Chronicle | A.P.

Orange County declared a local health emergency. There's only been one known coronavirus case in the county, but local officials have been galvanized by a proposal to transfer patients to a facility in Costa Mesa. O.C. Register | LAist

State lawmakers have been busy addressing the state's problems, or, depending on your perspective, creating new ones. A few attention-grabbing bills introduced in recent weeks:

In 2018, Republicans in California were crushed by the loss of seven congressional seats. That left the GOP with just six out of 53 House seats in the state. Now the party is mounting an aggressive campaign to claw back control of Democrat-held districts in November. One strategy: A full embrace of so-called "ballot harvesting," the sinister sounding but perfectly legal practice of campaign workers collecting mail-in ballots from voters and dropping them off at polling places. L.A. Times

But the GOP nosedive may not be so much about tactics, reports the A.P. It's the result of dramatic demographic shifts. A.P. 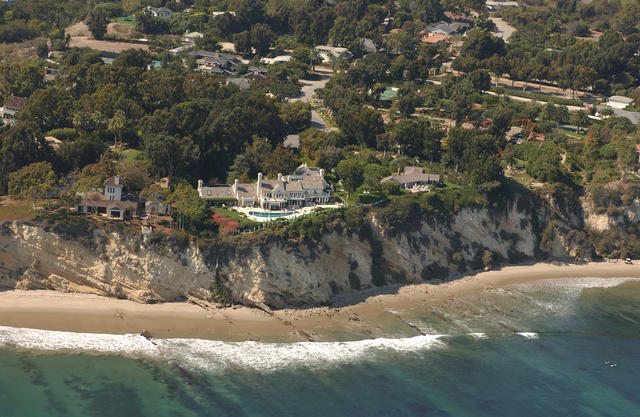 In 1997, a Watsonville couple loaned their helicopter to the Sierra Club to document destruction along the California coast. Then it became an obsession. Ever since, the California Coastal Records Project has periodically taken high-resolution photos of the state's entire coast — nearly 100,000 images in all — archiving them in a searchable database online.

It's so detailed that Barbra Streisand sued to have pictures of her Malibu home, above, removed. She lost. The kerfuffle inspired the phrase "Streisand effect," or when trying to hide something only makes it more visible. Atlas Obscura | Californiacoastline.org

The project has been an invaluable resource for studying coastal erosion. Below, for example, are views of the same stretch of coast just south of San Francisco in 2019 and 1972. 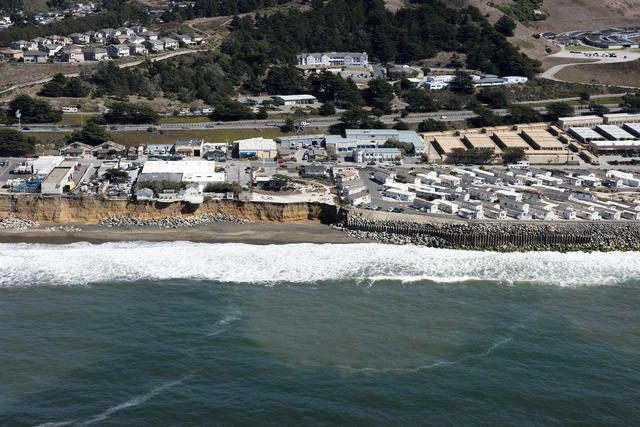 The Pacific Skies mobile home park in Pacifica, seen on the right side of the photo, in 2019. 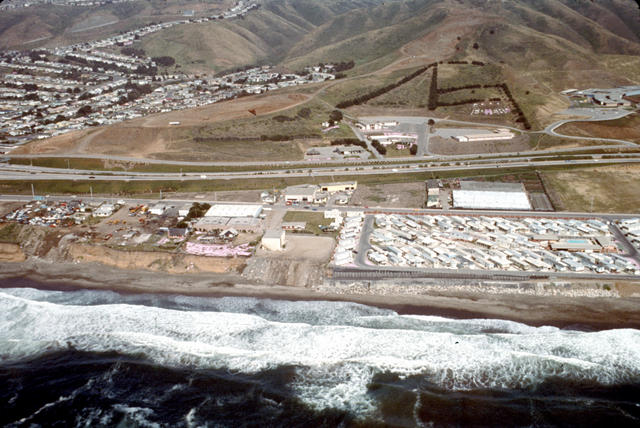 A fellow calling himself Bo Diggins held a meeting in Redding on Wednesday titled "Jefferson Military Simulation Meeting," which was attended by nearly two dozen people. A flyer that announced the gathering — addressed to "gun lovers," "former law enforcement," and "ex-military," among others — warned about communists laying siege to the North State. The recruitment effort had hallmarks of a hoax, but residents were left on edge. KRCR | Record Searchlight 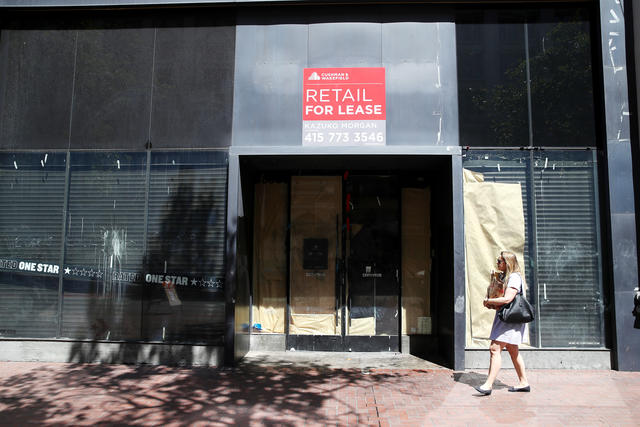 San Francisco residents will vote next week on whether to tax landlords whose storefronts stay vacant for six months or more. If approved, San Francisco would become one of the first big U.S. cities to impose a penalty over derelict storefronts, which officials blame for creating blight. Supporters of the measure say property owners are holding out for higher-paying tenants. Some spaces stay empty for years. KQED | Curbed San Francisco 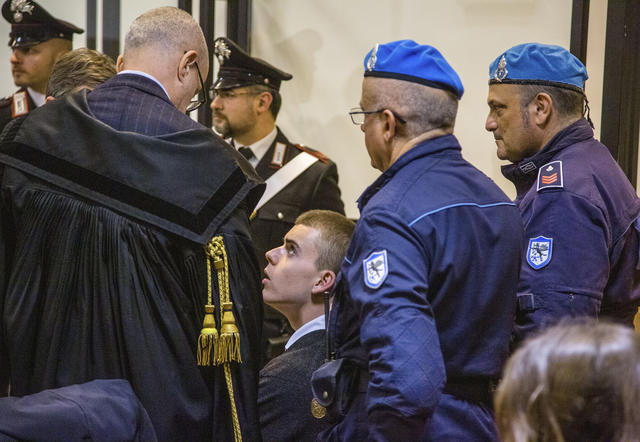 Gabriel Natale Hjorth, a graduate of Tamalpais High School, spoke to his lawyer in Rome on Wednesday.

The murder trial began for two San Francisco men accused of murdering a plainclothes Italian policeman while vacationing in Rome last summer. Prosecutors said Finnegan Lee Elder, now 20, thrust a knife 11 times into the officer and left him bleeding on the street. Finnegan and his friend, Gabriel Natale Hjorth, 19, said they thought they were being attacked after a thwarted cocaine deal hours earlier. A.P. | BBC

Kevin Keaney, a Berkeley painter, kept decades worth of his work in a San Francisco storage unit. But when the facility reached out to tell him there was a problem with his debit card, he missed the message. So they auctioned off all 225 of his artworks without his knowledge. "My entire life has just been sold," Keaney said. S.F. Chronicle

In a major setback to oil production in Kern County, an appellate court tossed a local law that allowed oil producers to rely on a blanket environmental approval for 72,000 new oil wells. That means future drilling proposals will be reviewed by the state rather than the county, which the court said ignored health risks posed by oil industry pollution. Desert Sun | Bakersfield Californian 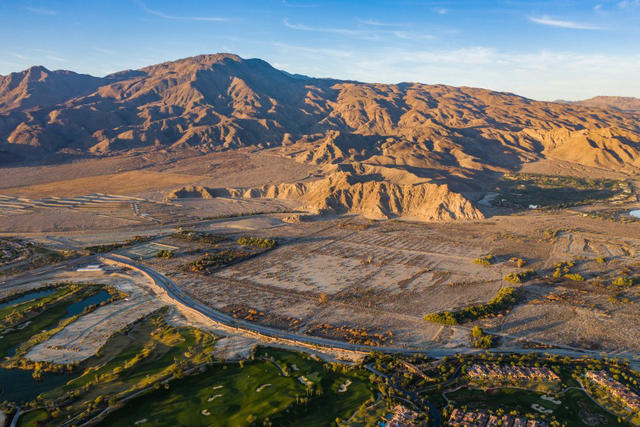 An aerial view of Coral Mountain, a master-planned “wave-based community.”

Kelly Slater, the surfing legend, is building the world's largest man-made wave in the Coachella Valley, 70 miles from the ocean. With more than 100 golf courses already serving the region, developers are counting on a surf resort generating excitement in an area where the demographics have trended younger in recent years. L.A. Times | NBC News 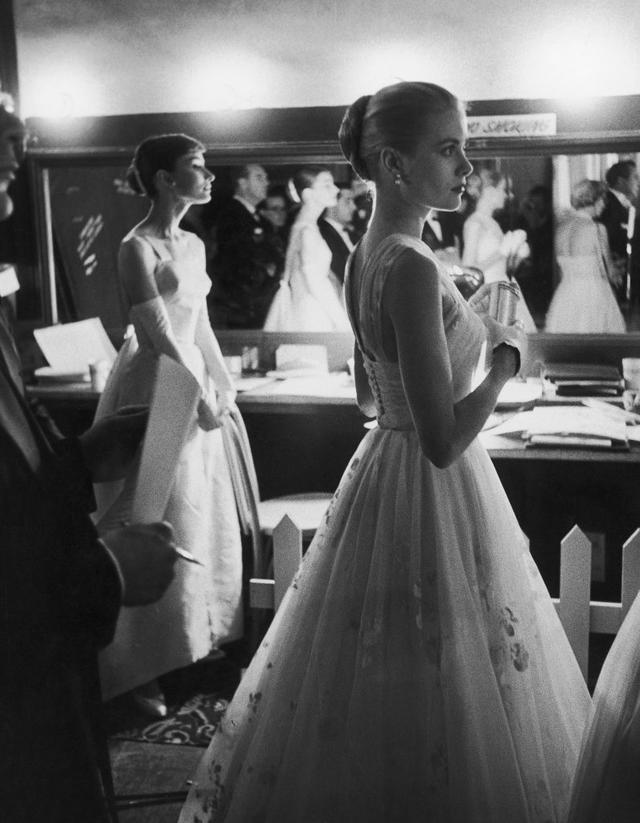 Allan Grant was one of the great photographers from Hollywood's Golden Age. A LIFE magazine staffer between the 1940s and 1960s, he enjoyed extraordinary access to the glamorous world of show business, capturing indelible images of Hollywood royalty, including the shot of Audrey Hepburn and Grace Kelly backstage at the 1956 Oscars, above. Here are 28 more Grant images. LIFE 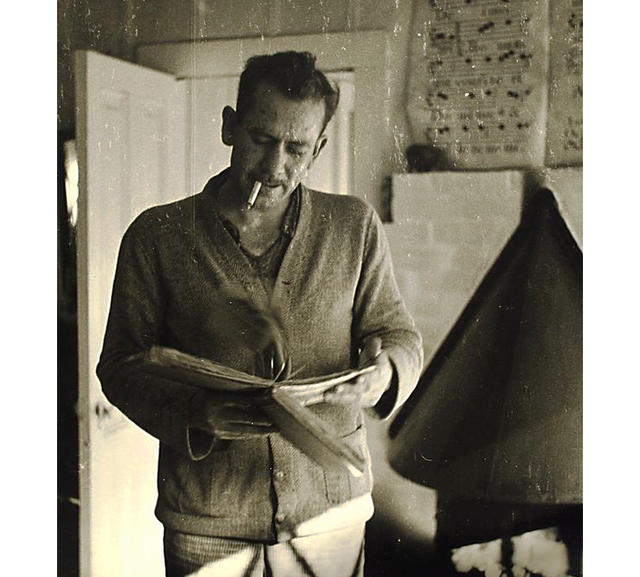 John Steinbeck in an undated photo.

John Steinbeck was born in Salinas on this day in 1902.

As a young man, he wrote a series of articles for the San Francisco News about labor unrest in his hometown, which erupted in a bloody crackdown on striking lettuce workers in 1936. The experiences inspired in Steinbeck a quest to give voice to the oppressed and resulted three years later with his masterwork "The Grapes of Wrath."

The book was celebrated as a work of genius and awarded the 1940 Pulitzer Prize, but it was also ferociously criticized. Among the lines of attack: That Steinbeck was Jewish.

After receiving numerous letters on the matter, Steinbeck penned a response to a group called "Friends of Democracy" that had asked him to clear up the matter of his ancestry.

"I am answering your letter with a good deal of sadness," Steinbeck began. "I am sad for a time when one must know a man's race before his work can be approved or disapproved. It does not seem important to me whether I am Jewish or not, and I know that a statement of mine is useless if an interested critic wishes to ride a preconceived thesis. I cannot see how The Grapes of Wrath can be Jewish propaganda but then I have heard it called communist propaganda also.

"It happens that I am not Jewish and have no Jewish blood but it only happens that way. I find that I do not experience any pride that it is so."

Steinbeck explained that his ancestry is German and Irish, then continued:

"Anyway there it is. Use it or don't use it, print it or not. Those who wish for one reason or another to believe me Jewish will go on believing it while men of good will and good intelligence won't care one way or another. I can prove these things of course — but when I shall have to — the American democracy will have disappeared."